I am dancing in the club and thinking how many times I’ve gone out wishing I’d stayed in. Earlier, I read Summer Kim Lee’s article on obliged forms of sociability. Her conception of ‘staying in’ is a refutation against the exhaustive demand to be active in any given moment. It can be a politics of self-pleasure, a way of accessing your own interiority in a social space, and ultimately, ‘a different kind of desire for oneself and others.’

That evening, before the club, I see Grouper perform in the Utzon Room at the Sydney Opera House. At the concert, I experience a sudden reorientation towards a sense of drift—the excessive light and noise from outside collapsing into something barely perceptible. Such moments of flight transport you somewhere that evades a concrete grasp—there is a temporary disappearance beyond the physical encounter. It’s the same kind of feeling you get at the club, when 11pm suddenly transforms to 3am. The next day, you’re unsure of what exactly happened, the fogginess monumentalised into memory.

After Grouper’s performance, I make my way to Club 4A, a night of music, performance and audio-visual art presented by 4A Centre for Contemporary Asian Art at Dynasty Karaoke in Chinatown. Called to reflect upon the event, I’m convinced to abide by this study of interior attentiveness—to ‘stay in’.

Here is what I remember:

1.
wytchings, opening the night at Club 4A with her first ever live set, which features a tableau of samples ranging from Winona Ryder interviews to the TV show Castle laid over Ableton experiments. Her friends are flocked around the stage dancing in a tight group, but it’s early enough that others are sitting or chatting elsewhere. Her friends all scream ‘I love you!’ after the performance, and there’s a sheepish ‘I love you’ back. For a second, this intimate exchange causes everyone else in the venue to fall away into the background. 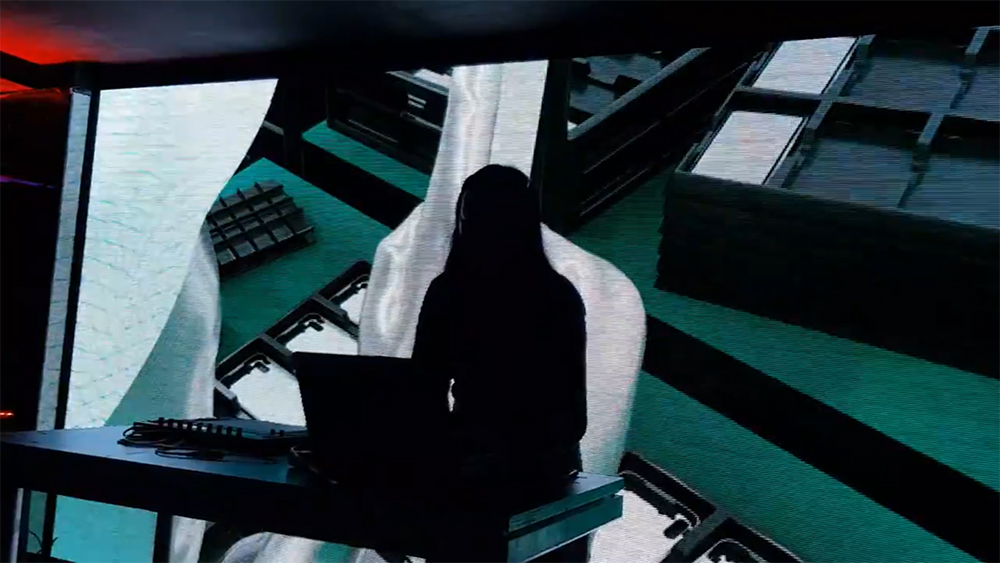 2.
It’s my second time at Dynasty, so the terrain is not entirely unfamiliar, though certain details jump out anew. Up the stairs the scene is Terracotta warrior replica statues, gauche Chesterfield type sofas, an inordinate number of mirrors, all striped in neon lighting. I drink water out of a plastic Hennessy glass. The actual Hennessy bottles are displayed like proud trophies next to the terracotta sculptures: untouchable. Someone offers me a sip of their diluted Hennessy green tea and I figure this is as good as it gets.

3.
The saxophone duet between Rainbow Chan and Marcus Whale. When they come on close to 11pm, Dynasty is almost full. Perched on a low stage, they sit facing each other on a diagonal. Everyone moves forward, huddling into the hushed bubble that reverberates from their sound: two saxophones grinding to a stretched-out-drone. It is the only time of the night when the chatter of the crowd quietens to a whisper. Midway through, Chan weaves in her vocals, softening the overall experience of listening into a mode that feels more rounded and lilting.

There’s something I love about the tactility of seeing people lean into the process of music-making, in that it feels full of life: watching fingers move across saxophone keys, the breathwork, the closing of eyes. Evidence of a body at work.

4.
Harry Chan’s dizzying expressway footage, which is projected on repeat as one of the visual backdrops to the stage. I echo Bhanu Kapil’s thoughts quite literally when she writes, what happens when you keep on going in a car? I lose my grasp in that sped-up vortex, trying to settle my eyes on a still object, though the speed of the car precludes these efforts. And I keep thinking the roads are somewhere in Sydney, until a flash across the unmistakeable monotone gridlines of the Bank of China tower gives it away as Hong Kong.

5.
It’s getting late, and I spy someone opening TripView to check their last train home. Haven’t we all been there before?

6.
In recollection, Rui Ho’s set is a blur of synth-y experimental club sounds. Describing its technicalities would be a fruitless exercise but what I can remember distinctly is the mood. ‘Memory is a genre of fiction’, says McKenzie Wark, and I can’t help but think of the challenges of distilling the live moment onto the page—if we can rely on words to translate sensorial surfaces of experience. But we try anyway. My friend pulls me to the front to dance with her, and I stay there for some minutes, getting lost in the refuge.