It takes a 50-minute train ride and two buses to get from South-West Sydney to Rushcutters Bay.

Trips of such length and commitment are punctuated by interesting characters: teens with bum bags talking a big game about their sexual conquests; aunties propping their callused feet up on the seats; a woman chomping on a lamb kebab hidden in her Gucci handbag, garlic sauce dripping from her acrylics. The windows let out their hellish death rattle; announcements get lost in the static. This is a liminal space, where we all must sit patiently, watching the land around us transmute: outside the window, the wild sprawl of Western Sydney contracts, hills forming as dense shopfronts and skyscrapers rise from the earth.

When I arrive, it’s dark. The disorienting journey is at odds with the analgesic haze of this sleepy neighbourhood, doused in evening light. 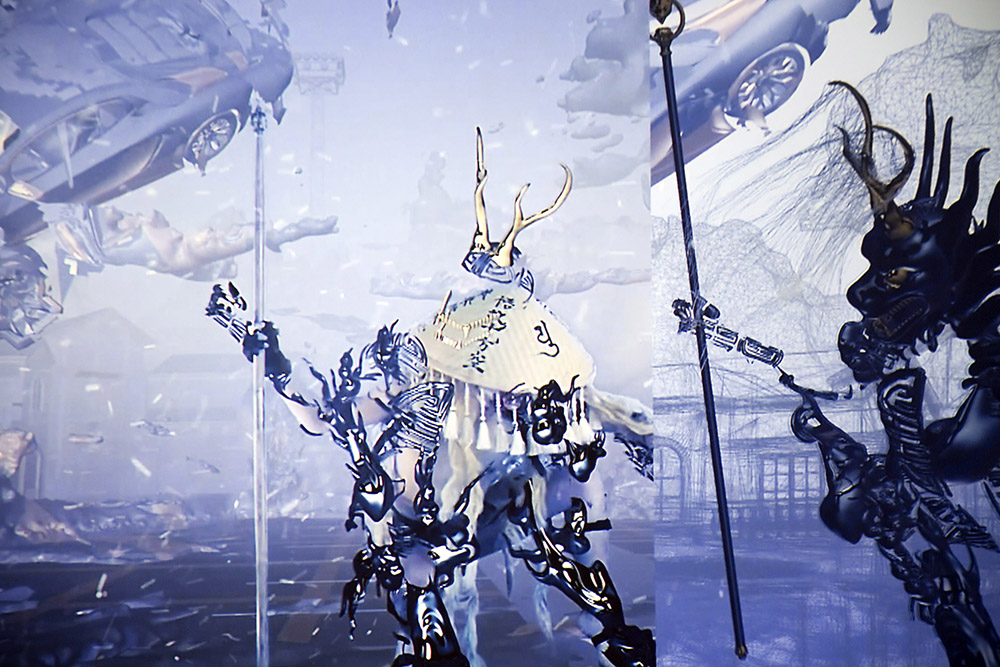 Dad used to take us out here sometimes when my siblings and I were young—stuffing our backpacks with extra jumpers, muesli bars and Pump bottles filled with water and orange pulp. Going to see the Harbour was like travelling to a foreign country. We played the parts of tourists well, following the curve of the water, watching, wide-eyed, as daylight broke into shards against the waves. We snapped Kodak pictures below chevrons of wailing gulls, in front of boats that were leashed to the shore like over-groomed show-dogs.

Back then, there was this feeling that I was walking towards something: to the idea of Sydney that exists in everyone’s minds, to the centre of it all.

Luke Bodley’s piece in the exhibition publication defines the ‘The Cosmopolitan’ as the ‘having and making of worlds: the simultaneity of world-making and global entanglements. It is about you and I, and our degrees (or lack thereof) of separation.’

Bodley draws on Hellenistic philosopher Hierocles’ theory of concentric circles, a model that represents the cosmopolitan ideology that all humans belong to a single community. The cosmos locates the self at the centre, with all immediate to distant relations rippling outward from this point—the closer rings constitute immediate and extended family, while the outer rings constitute the local community, citizenry and humanity. As each successive ripple grows further and further away, Bodley argues that the degree of oikeiosis (‘familiarisation, affinity, affliction, endearment’) lessens.

This is the central conceit of Cosmopolitan, organised by Rafaela Pandolfini with Jana Hawkins-Anderson, which unites writers, artists and collectives from Australia, Aotearoa, China, the USA and France. This series of works enfolds the local and the international into a single space, aiming to explore whether it’s possible to achieve a contraction of these circles. The drawing of everything we consider ‘other’ into the unitary centre we reserve for those we are most intimate with.

In our globalised modern world, neoliberalism has forced disparate countries, peoples and sub-cultures to overlap and entwine. Global flows have ruptured traditional enclosures and state borders, creating new, hybridised forms. But this entanglement hasn’t resulted in a utopic sense of unity—free of divisions, exploitation and violence.

Underlying everything is power.

This messiness is distilled in Hana Earles’ ‘Regenbogenfarbe’ (2019), which greets observers at the entrance.

An expansive dance mirror covers the wall of The Drill Hall. In the reflection, I see myself, a stranger, placed directly in front of the stretch of water outside. Yachts and cruise liners cluster around my shoulders like seafoam. Near the centre of the mirror, a small canvas stands on a podium, leaning back against the surface. It’s a colour field study: thick, kaleidoscopic oils bleeding together, caked over what looks like a half-formed pencil sketch of a flower.

The cacophony of elements here—the irreverent, psychoactive colours; the buried attempt at sincerity; the symbols of wealth outside the open door; the sight of my own alienation—reflect the dysfunctional nature of a cosmopolis.

Even the pristine drill hall, a vestige of the twentieth century designed for naval and administrative use, reminds the viewer that this environment is a construction of the settler-colonial project.

Part of the absurdity I feel is informed by my background: I was raised in an immigrant community, in a version of Sydney very different to the one I see. I wonder what it would be like to look in the mirror with a different face? Would the image be pleasant, or even more violent?

Earles’ work is part of an exhibit-within-an-exhibit curated by Spencer Lai called Hippies use the side door to enter the bazaar. True to its name, this room feels like a dream-realm marketplace, filled with repurposed objects, mounted tableaus and vibrant fabrics, draped over plastic chairs and across wooden tables. Every piece is charged, addressing the intimacies and disjunctions of interconnection. 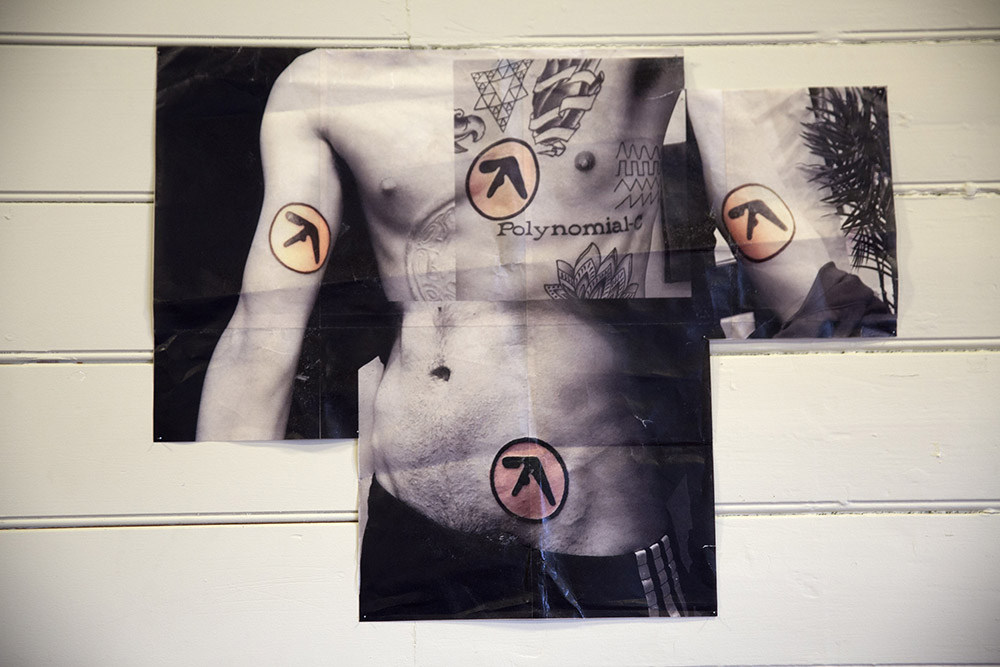 Ander Rennick’s ‘Anastasia’ (2019) is a Frankenstein’s collage—a corpse formed from images gathered online, which all depict body parts that are branded with Aphex Twin’s logo. This artificial torso thrills me. It showcases the ways in which the Internet has broken down walls, uniting those with a shared passion into a single entity. It revels in this freedom, its surface slathered in baby oil, exuding friction, boundlessness and sensuality.

Conversely, other works like Jessica Kiely’s ‘eleven seventeen two’ (2018) explore how the utopic veneer of the Cosmopolitan obscures power. Constructed out of a series of women’s business wear essentials (pencil skirt, slacks, cardigan, blouse), this work speaks directly to the glamour and refined mandates of corporate life. But each piece is perverted, dyed neon yellow and pink, and threaded with gaudy sequins and multi-beads. These adornments, which mimic berry pinheads, reveal the process of production, alteration and cheap labour.

Beneath the surface of these signifiers of wealth lies real human labour and an incessant cycle of commodification—a tension this flashy, but deeply ambivalent bazaar knows intimately.

Burrowing into the folds of a thick curtain, the main exhibit roars to life with an explosion of mechanical whirs, gunshots and violent rustling—what sounds like a cicada frying itself on an electric swatter. These are the sounds of ‘Baby Chinayu’ and ‘Beio’ (2019), two videos by Andrew Thomas Huang and Asian Dope Boys, labelled ‘Exo-Performances.’

Disjunction, parody and absurdity—elements of Lai’s exhibit—are turned up to eleven, distilled in the writhing bodies of dancers overlaid with motion-capture ornamentations. The Shanghai-based collective Asian Dope Boys specialise in performance art that uses Tibetan Buddhist and Chinese imagery in conjunction with dissonant elements like Western music and club and drag culture. Here, all these elements are cobbled together with the aesthetics of video games—the figures dance, crawl and leap in fiery pits and snow-capped plains, wearing digitally-rendered bamboo hats and opera masks. 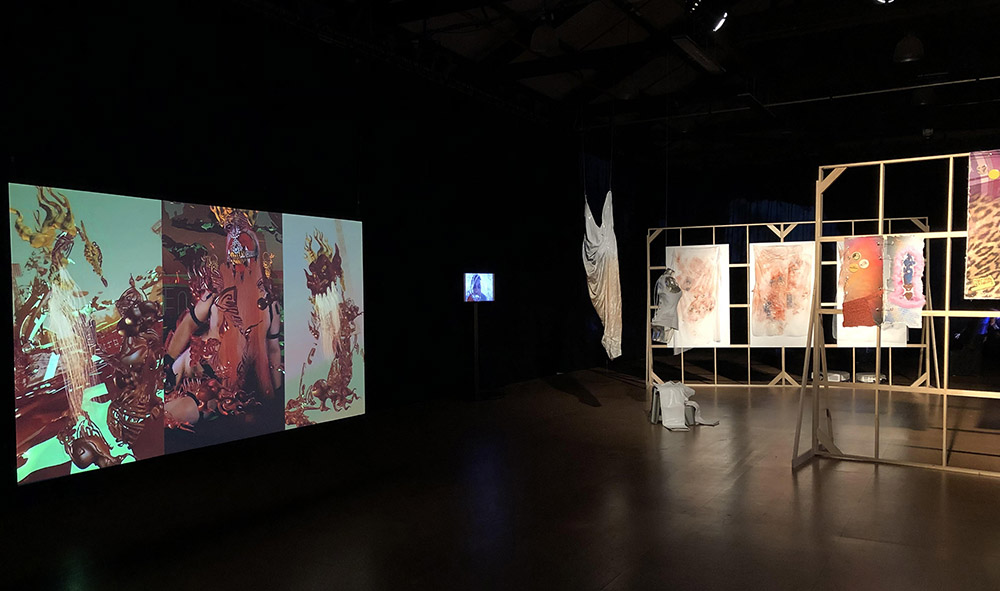 It’s a sensory overload: I feel a powerful sense of identification with these cultural signifiers, but also a jarring sense of estrangement from their hyper-exotification. The bodies in these works are digitised and othered. The images recall the fantasy Pan-Asian realms constructed in Western films like The Thief of Bagdad (1940), Sucker Punch (2011), and the recent Ghost in the Shell (2017) adaptation: all at once familiar, but fiercely uncanny.

Convergence is uneasy. The systemic imbalance between territories and communities causes it to jolt. This is further exemplified in E. Jane’s ‘#MoodExercises’ (2015-), which features the artist posing in front of a series of Apple Photobooth’s User Backdrops. Cosmic skies and pastel colours swallow up large portions of Jane’s face, as she bites into chicken or grins at the camera. The pixels and grains eating at her skin reveal the way algorithms erase Blackness, their inability to detect dark skin-tones points to the notion that technology, that great unifier, is never neutral.

But the work doesn’t undercut the power of technology to proliferate revolutionary images. Jane states that performing a range of physical and emotional gestures on social media ‘is vital for me to do as a Black woman slave descendant, as recorded or acknowledged range of emotion and action is often denied to us by the popular imaginary.’

All the works in this exhibit reflect the difficult implications of existing in an intersecting, shared space—from Julianne Huxtable’s series of collages, which reveal the way white nationalists have co-opted aesthetics from Black punk culture, to Mimosa Echard’s ‘Anecdote’ (2019), whose hyper-feminine murals layer dried clitoria flowers with images of Edward and Bella from Twilight (2008), showcasing the global reach of the franchise’s valorisation of traditional womanhood and forbidden heterosexual romance. The Cosmopolitan, and the way it collapses boundaries and leeches from those most vulnerable, is a notion that is being continuously scrutinised, unpacked and reimagined.

Exiting the hall, I watch a pug frolic at the water’s edge and contemplate taking a photo on my iPhone. High above me, every home has its curtains thrown open; ottomans and flat-screens and golden, long-necked lamps on full display, the glow of every window chasing away the night.

There’s a tremendous sense of peace here, in this secluded neighbourhood abutting the lively pulse of the CBD. This strange miasma of comfort, of simplicity—it weighs heavy.