Writing about dance is difficult. Sometimes I feel like a bit of a novice when confronted with its vast and specific tangle of lineages. I  can never quite decide whether it’s better to absorb a dance piece as though I know nothing about it, or to approach it with its broader context firmly in mind. Tonight’s program of solo works by Meg Stuart is no exception. It is presented as part of the Keir Choreographic Award program, a philanthropically funded competition with a privately appointed jury and a $30,000 prize that sits a little uncomfortably in Sydney’s strapped-for-cash independent dance community. And then there’s the question of how to avoid missing or forgetting anything when viewing the performance. Before the lights go down for the show, my neighbour, R, offers a suggestion: go with what sticks. This helps. Much will inevitably slide away (into the recesses of lapsed memory, attention and dance literacy), but some moments will remain.

1. The sonorous drum kit which floods Carriageworks’ Bay 20 with thundering rhythms and sinks Stuart’s first solo, ‘Signs of Affection’, into a pleasant, vibrating stupor, even as her movements remain explosive: shouts pelt out like war cries from the stage and Stuart corkscrews and shakes, her limbs striving to accomplish independent tasks faster than they can manage.

2. The rub and crunch of Stuart’s cropped leather jacket in ‘I Take It Back’ whenever a particular sequence erupts through her arms and hands,  cutting short her spoken words.

2a. The way these words, which always end with the phrase, ‘I [don’t] take it back’, sketch a past romance of devastating proportions.

3. Especially this: the long blonde wig that appears quietly upstage at the end of the evening, the hair as long as Stuart is tall. The way the wig is carried over her head, almost but never quite donned. How she lies down and covers herself with it, and then rolls over to tenderly embrace it, before wading out of it on all fours.

4. Her face in this same, final piece (‘All Songs Have Been Exhausted’), somehow softened. Is it the lighting design, contained and fire-like at the front of the stage, which lends her this softness? The looser fitting shirt? Or has she washed off her make-up?

For this is the other thing that sticks (5.): her costuming. For much of the evening, Stuart wears tight jeans, and early on, a sheer top with stripes on it—clothes that don’t look comfortable to roll around in. Red lipstick and dark eye make-up lend her face a surprising, almost gaudy theatricality. Or perhaps they just produce something at odds with the aesthetic of androgyny and utility, an aesthetic I’m used to seeing in dance works emerging from twentieth century postmodern and minimalist practices (as Stuart’s do). Often I see tracksuit pants and no make-up, costuming choices that draw attention to the materials of live performance, to body-minds at work—or, if not this, then costuming choices that somehow disrupt gender binaries and gendered looking regimes. 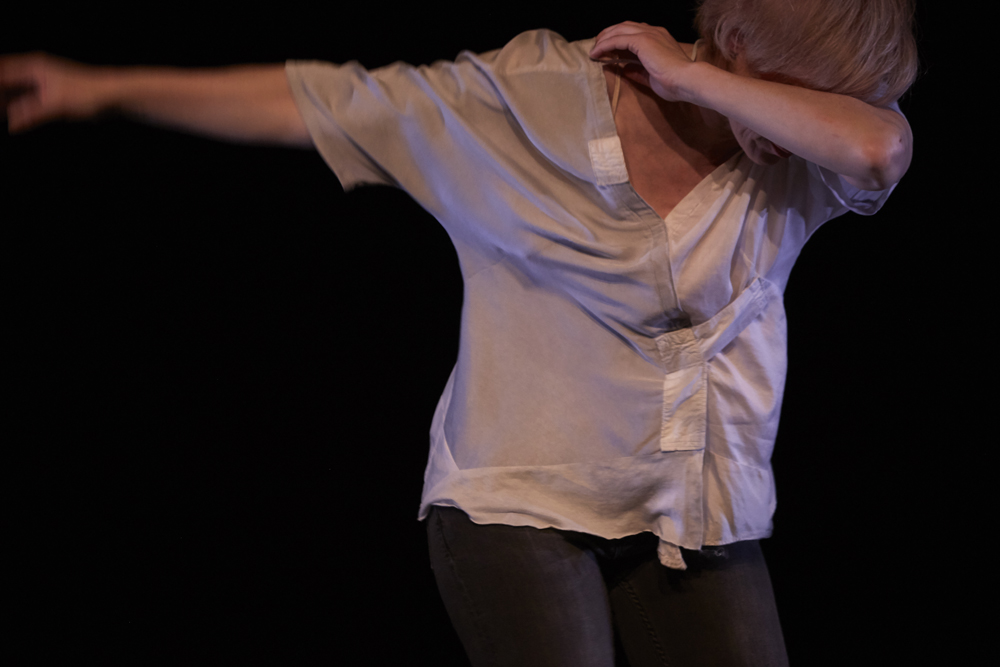 6. Something dance scholar Erin Brannigan says in conversation with Stuart after the performance, about the body as object versus the body as subject.

Yes, I think then, Stuart is a subject. She performs—in a way that sometimes feels painfully deliberate —the subjective experience of dancing. And she goes further still—she becomes a character with a backstory that continues beyond the here and now of live performance.

Somehow she is not just a dancer, but a woman in her forties or fifties, a woman you might glimpse striding across a courtyard in winter. A woman familiar with loneliness, a woman looking for love and for meaning.

Does this last aspect emerge from gesture? For example, from the way Stuart touches and holds herself in ‘Signs of Affection’ (a sort of self care, self-stimulation)? Does it emerge from the way she talks about some of her works, the way she links them thematically to healing, loss and time? Is it in the surprise of seeing someone older than say, thirty, performing this searching (something by no means the sole domain of ‘youth’, but popularly presented as such)? Or is it indeed in her costuming, which evokes a climate, a wider life, and has something to do with gender? And/or: can any of this be attributed to the ‘dance theatre’ part of Stuart’s background?

My sense of Stuart’s work remains cloudy. Luminous moments (that wig, the rub of the leather jacket) persist in this murkiness—but it is a productive murkiness, full of the questions that linger.