i. Looking at light

It is a conduit for illuminating a subject, or otherwise it is a field of white. But light can be a message beaming out, and so light can be the subject, reflecting back in.

If you stare into a white light long enough, the world falls away and your peripheral vision darkens to form inky waves around your line of sight. It’s not great for your eyes but the after-images—the static overlays of what you were looking at that tinge the world in psychedelic colours—can make it all worthwhile.

ii. Capturing light in a storm

The photographic paper is laid out, ready to absorb the slow movement of time through its prolonged exposure to light. Winds pull and the grey ocean crashes against the coast as storm Diana approaches the lighthouse. The radar map of her spiralling pressure system is mesmerising, and she’ll be here soon.

As the white light of the giant lamp flashes out over the coast, the hope is some of it will be absorbed into the paper, measuring out the steady on/off on/off of the lighthouse. A whole night of repetition imbued and layered in camera-less photography.

The wait is agonising. The light funnels down as the whorling pressure of the storm lashes the Scottish coast. Flashes of light continue like clockwork from the giant lens above, but now there are haphazard bolts and strobes emanating angrily from the horizon. All of these are bubbling away together on the paper, making tangible the immaterial phenomena of light and time and chaos.

iii. The first ever lighthouse

Living in France held a number of challenges, perhaps none greater than speaking French without the flat lazy vowels of my Australian accent. Of the words I had trouble with (and there were many), the one for ‘lighthouse’—phare—seemed to stick in my mouth and come out wrong every time. I’d say ‘fair’ instead of ‘far’. I think I had trouble because the word itself was never cognate with anything familiar in my mind. What does phare have to do with a coastal tower with a big light? How did this word become the word?

But, researching lighthouses for this piece, I had an epiphany that illuminated my muddy understanding of phares. The seventh wonder of the ancient world, the tallest human-made structure on earth for centuries, was a lighthouse on the island of Pharos. Descriptions of the 100-metre-tall structure detail the twin innovations of raising the fire pit to increase visibility and using mirrors to reflect the sun during the day.

In the third century BC, it must have been spectacular to see the Port of Alexandria illuminated at midnight. To think that banishing darkness from space began so early in our history, and that using light as a means of communication was so well established. Then again, light has always been a constant. And it has always been a material to which we can apply human labour to create innovation. From the pinnacle of construction—the beacon of an ancient lighthouse shining out to sea—to photography, capable of capturing those same rays, and of stopping them in a moment to make them immortal. 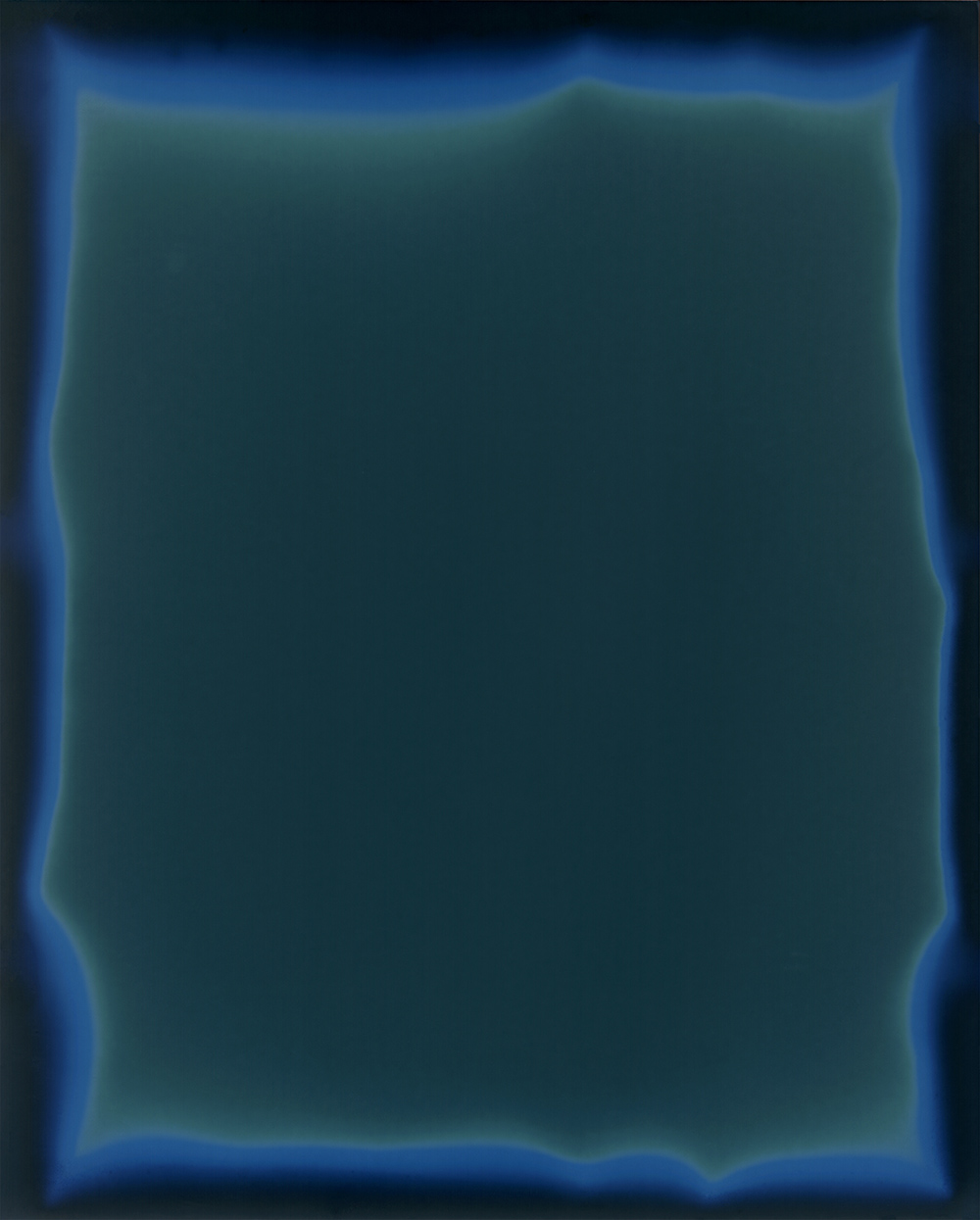 Every lighthouse is an eye, surveying the horizon and spilling out light in a confluence of ancient communication and elegant innovation.

Every eye is a lens that captures that light, interpreting what is given and inverting it into meaning.

Every lens is a light—reflecting, refracting, amplifying.

v. A coast grows out of absorbed light

Rodin said photography is a lie, ‘for in reality time does not stop.’

However, in examining the UV imprints of ‘Glass capture #1 – 5’ (2019), I see all kinds of micro and macro growths and recessions, like a psychedelic petri dish, or a choppy ocean. The transfer of light has touched everything here, from the work’s beginning in that Scottish lighthouse, to the morning light that passes through the glass panes, casting milky shadows on the gallery wall, before finally bouncing back into my eyes.

In that light, I spy infinite layered realities both emerging and receding:

It used to be that lighthouses were manually lit, using lamps and oil as fuel. Then, in 1822, the Fresnel lens arrived: a hulking mirrored boulder that extended the light’s beams through a network of prisms, like a monstrous eye rushing out to sea. When electricity finally made its way to remote coasts, so too did lightbulbs, automated clocks and radio communication. That’s when the sting of encroaching obsolescence begins to prickle up my spine.

In the mid ‘90s, it felt like everything was happening all at once, collapsing in on top of one another. French archaeologists re-discovered the sunken remains of the Pharos of Alexandria, and then Australia de-manned Maatsuyker Island in Tasmania, our last non-automated lighthouse.

In saying hello to the Pharos, I was saying goodbye to Maatsuyker. The Internet had come and made place obsolete. When you can be anywhere and everywhere, anytime and all the time, all anyone worries about now is time. I can watch the Alexandria excavation in real-time, and I can see the GPS of all those ships passing safely by. We’re hurtling forward too fast, but we’re more obsessed with the past than ever. What about me right here in the present? 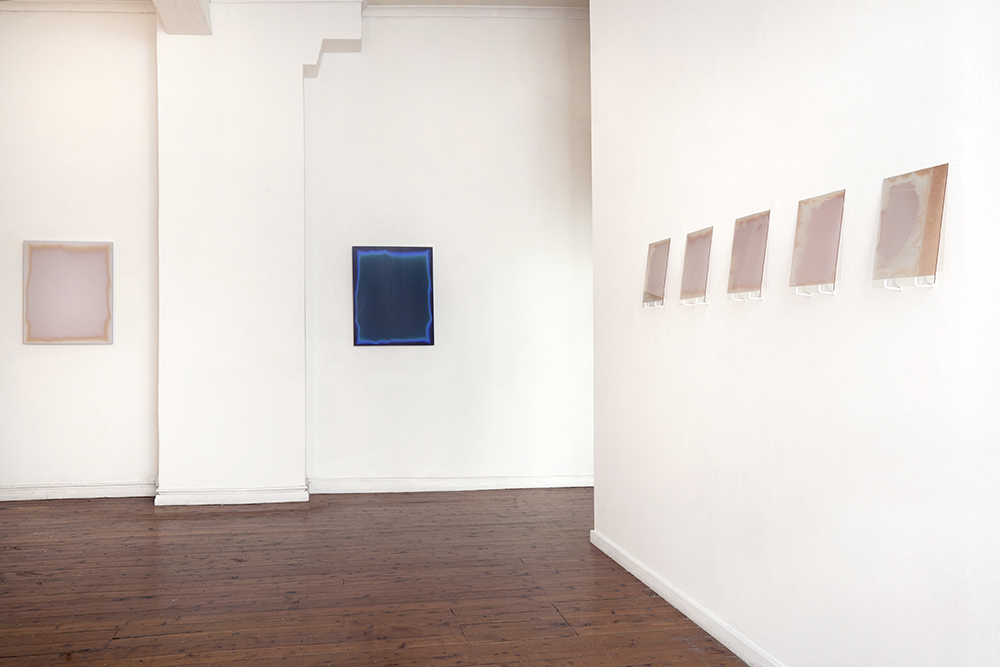 vii. Releasing light until it vanishes

The meditative tick and whir of the lightbox heating up and fading back down is hypnotic. Perhaps some ingrained memory of mine recognises this characteristic and immediately associates the pattern with the rhythmic sound of waves crashing. The automation of ‘Luminous Capture #7 (positive)’ (2019) feels like time ticking through minutes, decades, centuries. Each flash is a slice of time, happening in both a linear fashion—one after the other, but also collapsing—one on top of the other.

How fast did that time move across the sky, and reflect back into my eyes? Am I truly capable of seeing every flash from storm Diana or just the prolonged exposure?

These works have captured light, but they also acknowledge that light expands out to the horizon and into the dark—and allow it the space (and time) to do so. Now the light is looking at me.