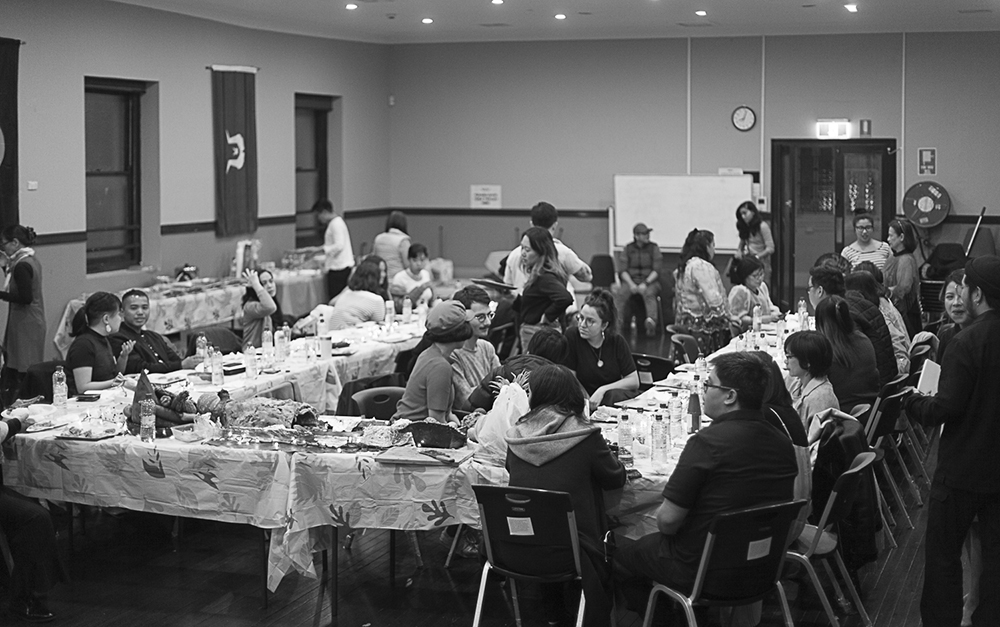 ‘Usapan Sa La Mesa’ is a decolonising process and gathering of Filipinx/Filipinos/Pinays on stolen Gadigal land, organised by the interdisciplinary artist Eme and Running Dog contributor Soo-Min Shim. It involves practicing Kapwa (shared identity), the sharing of experiences and knowledge in the hopes of achieving communal solidarity within the diaspora—Bayanihan!

Usapan Sa La Mesa originated from the ongoing conversations we have around the table with family we’ve made over the years. By bringing this community and family ethic of love and care to the gallery we hope to interrogate institutional power.

Activists, artists, poets Jennifer Estellore, Bridget Harilou, A’isyiyah, Carielyn Tunion, RJ Dela Rosa, Eunice Andrada and Peter Murphy will be sharing their individual stories on diasporic decolonisation. They will be provoking a number of questions: What is community? How can we create safe spaces? What does it mean to be displaced, only to be complicit in settler-colonialism here? How can diaspora decolonise? Where does activism and art meet?

With food provided from Filipinx-run businesses, the sharing of food will be the catalyst for the sharing of love and knowledge. This event is an open conversation to open up more dialogue around the diaspora and decolonisation.
Join us for Merienda (snacks and desserts) at night!

Seating and Accessibility
Seating is on a first-come, first served basis. Entrance to Verge Gallery is via Jane Foss Russell Plaza. Lift access is available from both City Road and Maze Crescent onto the Plaza. If you have specific questions about access, please contact us prior to the event and we will make every effort to accommodate you.

A’isyiyah is a Javanese/Batak mama, daydreamer and community organiser. They are currently invested in building compassionate communities and learning how to put into practice intergenerational healing, radical parenting, food sovereignty and transformative justice. They are the vocalist of abrasive anticolonial punk band Arafura. They grew up on Cabrogal Land (South-West Sydney) but their spirit is inextricably connected to the volcanic sands of East Java and North Sumatra, the islands of their ancestors.

Bridget Harilaou is a mixed-race, queer and agender writer, musician and community organiser with a single-minded passion for intersectional social justice and trouble-making (aka activism). As a radical anarcho-feminist things can get heavy, they like to unwind by enjoying the finer things in life, like spicy ethnic food and male tears.

Carielyn Tunion/ALIENCRY is a multimedia artist, videopoet, and serial story peddler based in Guringgai land. Using written word, video performance, moving image, and illustration as her weapons of choice, Carielyn’s practice explores decolonial femme resistance from the perspective of a mixed-heritage woman of colour living in the Australian settler state. Carielyn’s practice finds its roots in philosophies of daily dissent, radical softness/care, and ‘interceptionality’—a term coined by Michelle Cahill about disrupting white institutional subjectivity, based on Crenshaw’s seminal work on intersectionality. Often depicting self in her art, Carielyn is drawn to ideas of the body in relation to Earth as sites of devastation & exploitation, but also life & resilience. She is interested in how the othered and exoticised body acts as conduit for cross-cultural dialogues to depict & challenge the ongoing ravages of the colonial project—in the hopes of offering methods and spaces for the ongoing process of healing. Carielyn‘s writing, illustrations and pins have featured in zines, festivals, protests and shows. Her videopoetry has been published in Mascara Literary Review and Verity La, and has been exhibited in Sydney and New York.

Eme is an interdisciplinary, Filipinx artist based in Warrang/Sydney, Australia—unceded Gadigal land of the Eora nation. Their practice explores reflections drawn from personal lived experiences and layers of oneself that is marginalised by society. This queer, trans non-binary artist works with a decolonial framework based on research and bayanihan (communal solidarity). It is often expressed through community connectivity, representation and action by transforming stories of subjugation into strength. They showcase the communal experience to celebrate the nuances of being—utilising art as a tool for expression and survival. Their works experiments with photography, print-media, ceramics, sound, video, events and installation. Eme completed their Bachelor of Visual Arts Honours (First Class) at Sydney College of the Arts, Sydney University and now works with activists and organisations to continue the anti-colonial resistance in support to fight all forms of oppression.

Eunice Andrada is a Filipina poet and teaching artist. Her debut poetry collection Flood Damages won the Anne Elder Award (2018) and was shortlisted in the Victorian Premier’s Literary Awards (2019). Her work has been translated and performed in Tagalog, Hiligaynon, French, Japanese, Italian, Spanish and Czech, while her poems have appeared in local and international journals and anthologies. Her previous works have also won the John Marsden and Hachette Australia Prize (2014) and been shortlisted for the Fair Australia Prize (2018). Featured in The Guardian, ABC News and other media, she has performed her poetry in diverse international stages, from the Sydney Opera House to the UN Climate Negotiations in Paris. Her ecopoetics has been recognised through the NAHR Australian Poetry Fellowship on the theme of water, and the feature of her poetry in a climate change-themed exhibition at the Amundsen-Scott Station in the South Pole of Antarctica.

Jennifer Estellore is an activist and student of applied linguistics. As an activist, she’s organised youth and women, mobilising efforts to help advance the national democratic struggle in the Philippines and educating Filipinos and friends on the national and international issues primarily along the line of class analysis. She’s worked in the Philippines, Japan and Australia and coordinates with other anti-imperialist movements. As an aspiring applied linguist, she’s interested in wielding language as a tool to discredit harmful notions around identity and class.

Peter Murphy is currently the Chairperson of the Global Council of the International Coalition for Human Rights in the Philippines. He has been actively engaged in Philippines solidarity work since 1989, mainly through the trade union movement in Australia and the Philippines.

RJ is a Filipino videographer, writer and poet based in Sydney, Australia. His discipline in the arts is informed by his myriad of interests and research in writing, music, teaching and film. His video practice marries visual language with stylised storytelling to express cultural and sexual identity through the varied mediums involved in filmmaking. He has finished his Bachelor of Arts in English and Social & Cultural Analysis, and is passionate about collaborating with poets/artists in developing cultural bodies of work that tell stories of Filipinx peoples of the diaspora. He exhibited his collage art film John Plastic at MARS EXHIBITION in 2018 and is currently directing, producing and writing a Filipinx skate film titled Isda in 2019.

Soo-Min Shim is an arts writer and arts worker living on stolen Gadigal land. She received her Bachelor of Art History and Theory (First Class Honours) from the University of Sydney and is currently a Director at Firstdraft Gallery 2019-2020. She is currently a studio resident at 4A Centre for Contemporary Asian Art Creative Studios. She has written for several Australian and international publications including Art & The Public Sphere, ArtAsiaPacific, The Artling, Art + Australia, Art Almanac, Artist Profile, Runway Conversations, un Extended, and Running Dog.

Running Dog acknowledges the Gadigal people of the Eora Nation, the traditional owners of the land that facilitates the creation of this project. This land was never ceded and was taken by violence. We pay our respects to their elders past and present, and their descendants.