It’s easy to forget how to listen. To listen deeply, that is. I’m reminded of this at One Infinity, a collaborative performance by Playking Productions, Jun Tian Fang, Beijing Dance Theatre and Dancenorth. I’m reminded of attentiveness, or how to listen in order to feel—to be swept up inside the layers of a live moment. This is a curious thought to have during a dance production, which emphasises the feat of being seen, rather than heard.

One Infinity unfolds as a choreography of sound, building a world where movement responds to a soundscape comprised of traditional Chinese instrumentation. This accompaniment is framed around the guqin, a softly spoken seven-stringed zither (China’s elite class typically study this instrument within a broader education of leading a harmonious life). I think of how One Infinity cannot be divorced from its debt to these histories. More specifically, how those privy to such a performance should be aware that the guqin is steeped in a lineage and moral philosophy that stretches far back from the here and now of the black box. 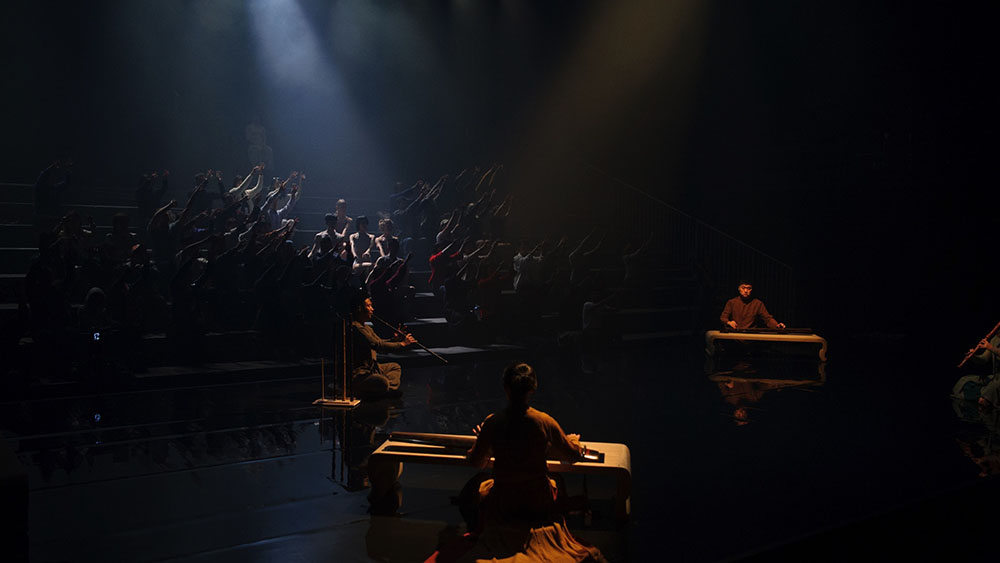 At the start of the performance, Wang Peng (guqin), Genevieve Lacey (recorder) and musicians from Jun Tian Fang (guqin/flute) seat themselves on a mirrored black floor. They face one another in symmetry. Two tiers of seating peel back from opposing sides, so the audience must also take notice of one another—there is nowhere to look but at our own situation staring back at us. For me, this involves the usual practice of examining the audience and seeing how many are white (so many) and asking, who isn’t here—who isn’t here, and ought to be?

With this in mind, my ensuing question is: how is the guqin consumed by this majority white audience? How does a choreography pay respect to, and create, an intercultural empathy towards a sound which—for generations—has been completely removed from the Western imagination? What kind of responsibility do we have as an audience to acknowledge its archive? I’m writing these questions not to offer answers, but to envision a horizon of further intersectional modes of engagement for cross-cultural performances.

As Emele Ugavule has suggested in her discussion on the need for greater diversity in those viewing productions, as well as those appearing in them, ‘what are companies doing to address the lack of emotional empathy their audiences display due to racial, ethnic, religious, gender/non-binary, or physical differences to [performers] on stage?’

Before the lights go down, choreographer Gideon Obarzanek appears and informs us of an additional element to the performance. He points to two dancers swathed in cream tunics, who are sitting on top of the stands. He invites us to mirror their movements. Both dancers raise their hand and wave in turn. We wave back too, hesitantly. It’s a catalyst for awkward laughter. So much of the audience’s attention is usually focused on sitting in silence and total passivity. We’re thrown by this call to actually be in this moment, together.

Soft ripples of the guqin punctuate the beginning of the work. Then, the spotlight shifts, illuminating two groups of dancers within each side of the raked seating. Huddled together and dressed in earth tones, they gesture with their arms wide, spilling towards each other in an intimate hold, and then fanning out again. The dancers reverberate one after another, obeying the shadow of movement from each preceding self. The visual I immediately conjure is one of stones skimming across a lake—the echoes of waves forming, vibrating, then disappearing to still water again. 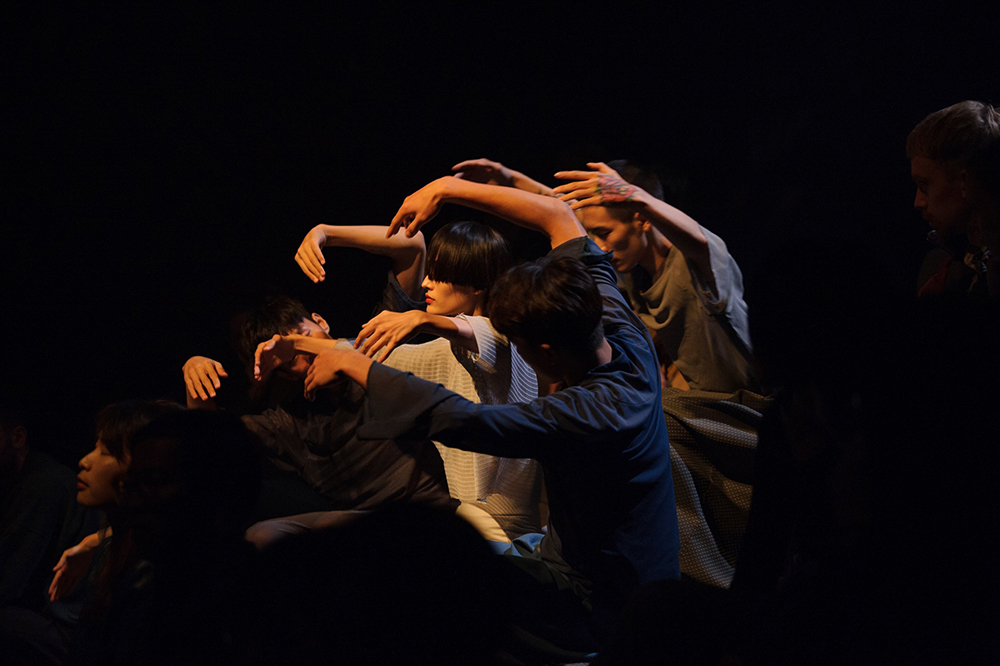 Meanwhile, the audience are also observing and acquiring the gestural qualities from the two dancers in cream. Some I remember: arms floating down, a lilting > gentle hello with the hands > undulating the arms up down > (many pliant wrists) > (many pliant elbows) > pace, more frantic now > fingers slowing to spring leaves curling in the wind.

Each movement cascades in line with the accents of the guqin, akin to what Obarzanek calls ‘real time listening and responding in the moment.’ Each raised  arm varies from participant to participant and, at one point, my partner asks if he’s doing the gestures ‘correctly.’ But the inherent imperfection—this impossibility of total replication—lends a certain improvisational impetus to the overall image, the sense that the performance is just that much more live, and ultimately, finite.

As a result, much of the performance occurs next to us instead of far below. The aperture of our attention shifts: we untether our gaze from the dancers as the primary visual spectacle. While they are still there to be ‘looked at’, our involvement in moving with them, feeling with them, disrupts the duality of doing/looking that is inherent in performative contexts more often than not. We are reaching towards a democratic ideal in which we are all creating conditions for a moment, as one (just as the title of the work implies!) It’s invigorating to give notice to and actually feel ourselves in our bodies.

Overall, One Infinity brings the agency back to the audience, to the constant feedback loop of giving and receiving between dancer, and you, and I. But the performance is also a springboard to ponder how we commune empathetically, how our bodies surrender into deeper listening with one another. And so, we listen, to attend to this shared moment.