‘Dear to me is sleep, dearer still being made of stone.’
Michelangelo Buonarroti, Buonarroti’s Reply (1545-46)

I kept thinking of two of Jenny Holzer’s most well-known phrases whilst watching Geng Xue’s video work Poetry of Michelangelo (2015), now showing at Artspace as part of the Sydney Biennale: the first, ‘it is in your self-interest to find a way be very tender’ and the second, its thematic cousin, ‘savour kindness because cruelty is always possible later.’ As Xue’s piece progresses through nine stages, we witness lumps of clay being carefully fashioned into a male body. It’s a hypnotic process: Xue kneels on and squashes the clay with her full weight; she rubs, squeezes and pinches it, forming out a nose, a mouth, an elbow or a knee; she presses against it with both of her palms, rendering the distinct outlines of cheekbones and jaw.

Descriptions of the sequential stages appear at the bottom of the screen and refer to the steps of ceramic production (‘shape the arms’/ ‘adjust the face’). These are then interspersed with lines from Michelangelo’s vast collection of sonnets and madrigals. Here Xue is aligning herself with the role of Renaissance artist, one who is given access to the divine right of creation. (There’s also the additional move with the gendering of the sculpture, given its objectification of the male as opposed to female form.) One close-up shows the whorls and ribbons of Xue’s fingerprints embedded into the clay forehead, another reveals two thick troughs from her forefinger and thumb denoting a shinbone—it’s a clay body also bearing the marks of her own. And when we arrive at step eight—‘Adjust the details: breathe life into the sculpture’—it is a body that is awakened. 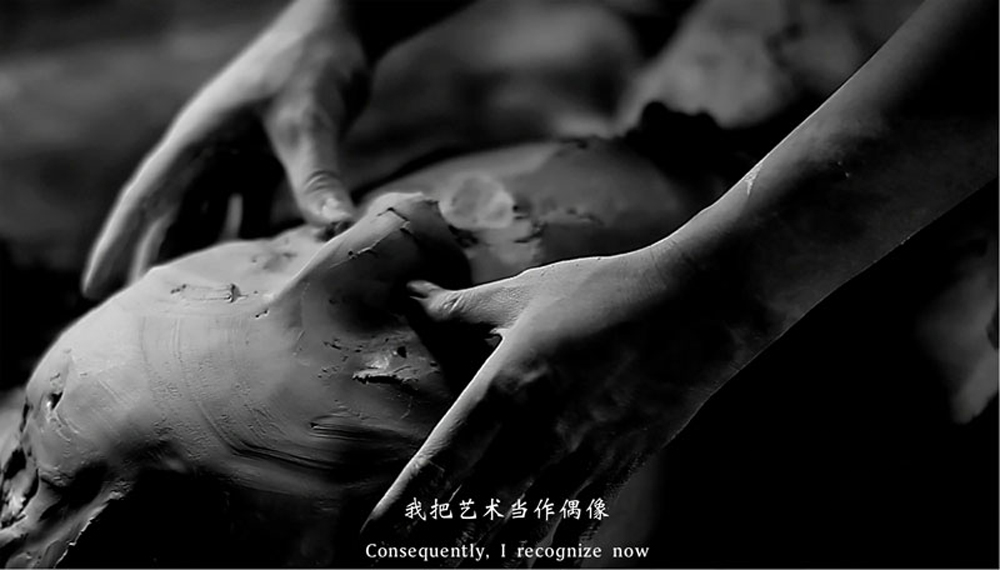 Xue’s clay figure has been subtly animated so that its fingertips twitch against hers, the eyes blink, and the chest and abdomen rise and fall. And even as this body never strays from its dull graphene-sheen, the slightest of movements transforms it into a flesh-bound thing: a body made up of sinew and veins, blood and bone. It is at once fantastical, horrifying, sweet, bewitching and uncanny. There’s a particular moment where Xue scoops out the clay from inside an eyelid to form its eyeball, reaching up into the frontal lobe, the experience of which is enough to make you mildly squeamish.

But as much as Xue has the power to imbue her sculpture with a living breath, she has an equal capacity to destroy. Step nine requires Xue to dismember her male figure, cutting through the clay with wire in order for smaller pieces to be prepared for the kiln.

We are never quite sure whether this act of creation is done out of love, obsession or cruelty. What we do know is that an earlier delicacy gives way to the slicing of the wire­­—a necessary task if this sculpture is to be fired and set, but one that seems to carry with it a more sinister form of pleasure and delight.

‘Corpses are (still) persons,’ writes T. J. Clark in The Sight of Death. ‘They are people we cannot help treating, at one level, as entities with wishes, fears, awareness, sadness, maybe depths of despair. We still desire, or do not desire their presence—their regard. And therefore we resent, or glory in, their failure to give it.’ [1] The presence of this body may be fleeting, but there is still a very real sense of anguish when Xue cuts through its limbs and flesh. And yet this body is no corpse at all, merely clay.

‘He who wishes to understand it must first of all die,’ pronounces Michelangelo at the bottom of the screen. When read in this context, the ‘it’ in question becomes less the torment of a heartsick lover, and more an admonition of the suffering that inevitably comes with giving life to the inanimate, of a creator aspiring to the Divine. And there is an underside of grief that infiltrates Xue’s work at the edges. (One of the reasons that I was so moved by Poetry of Michelangelo was because of the image of Xue softly holding the limp hand of her sculpture in much the same way I had held the hand of a loved one who was terminally ill.)

Both the temptation and folly inherent in this desire to give a body new life is well known. Think of Mary Shelley’s monster crying out to his tormenter—‘why did I not extinguish the spark of existence which you had so wantonly bestowed?’—or Jorge Luis Borges’ protagonist who realises ‘with humiliation, with terror’ that ‘he too [is] a mere appearance, dreamt by another.’ [2] It is in placing Michelangelo’s ruminations on love alongside the shrouded pieces of Xue’s dismantled sculpture that his words are  able to be configured anew. These words become an ominous warning from a master creator: that it is always necessary to know when to leave an object in peace—
‘To neither see nor hear is my good fortune
therefore rouse me not,
but speak low.’