What does home teach us? This is the question that consolidates in my mind after a five-hour train ride from Sydney to Cootamundra, the plains as unfamiliar to me as I am to them. The landscape is dominated by yellows and greens dulled by the sun; the roads are double the width of those in Sydney. Time slows to a different order to what I am used to, or perhaps, it is less absorbed by the tyranny of speed with which the city aligns its survival.

I am in Cootamundra for the premiere of Angela French’s solo dance work Return to the River. In my twenty-four hours visiting the town, I walk up and down the main strip just enough times to memorise the order of shopfronts. There are three Chinese restaurants, an RSL, a couple of old carpeted pubs, a Woolies, and several used car dealerships. On the outskirts of this business district is the Arts Centre Cootamundra, a community run facility housing a gallery, artist studios, and the Tin Shed Theatre, where French stages her work over two days. When I enter for the Friday evening premiere, the fragrance of eucalyptus permeates the high carriageways and there is a display of local mud-dyed silk, the same material used to make French’s costume. Other process materials line the walls: photos of the Murrumbidgee, notes, branches, and leaves. 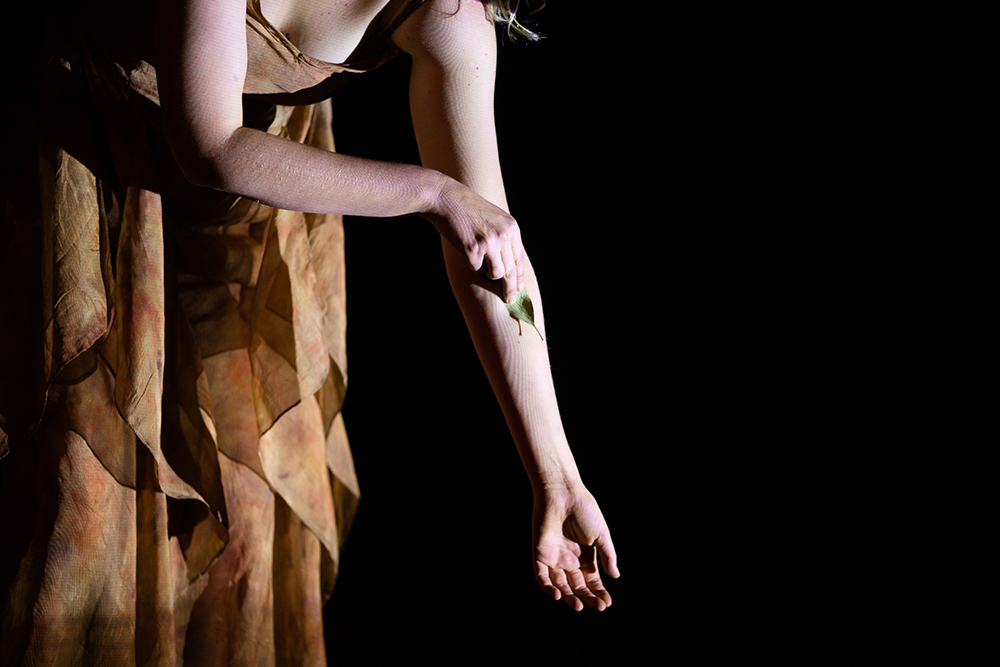 French grew up in Narrandera, a town adjacent to the Murrumbidgee. She would later move to Sydney, and after that, Dubai, in pursuit of opportunity. Now, she’s back. Return to the River is foremost an attempt to evoke this sense of coming home—a romantic yearning for nostalgic completeness, which conjures physical landscapes held intimately by memory, proximity, or the streams of time. French melds these landscapes onto her body. Each environment she passes through seems to inscribe the writing and re-writing of herself. She dances place, as does the place dance her, instead of merely dancing in each other.

French begins slowly, a single large branch balancing horizontally where the neck curves into the shoulder. Her steps loom large in her care not to disturb this fulcrum. Smaller twigs are placed upright around her, and we hear the ambient noise of the river ecosystem—birdsong, crickets, the quacking of ducks. Minutes pass before she lays out a mixture of dried eucalyptus and bark in a weaving S shape. She retreats back upon this ‘river’, all the while picking up the material, holding it to her mouth, and finally, letting it fall back through her fingers in a half-anguished conclusion. Afterwards, she rolls around on the floor, and the structure of the ‘river’ puddles to a muss of detritus. There is an overt suggestion of a desire to remain in such a nurturing place, but this possibility is wrested from French’s control. Although French opens her body to bear witness to the river in which she loves and finds consonance, her connection to dwelling inside this space is tenuous. 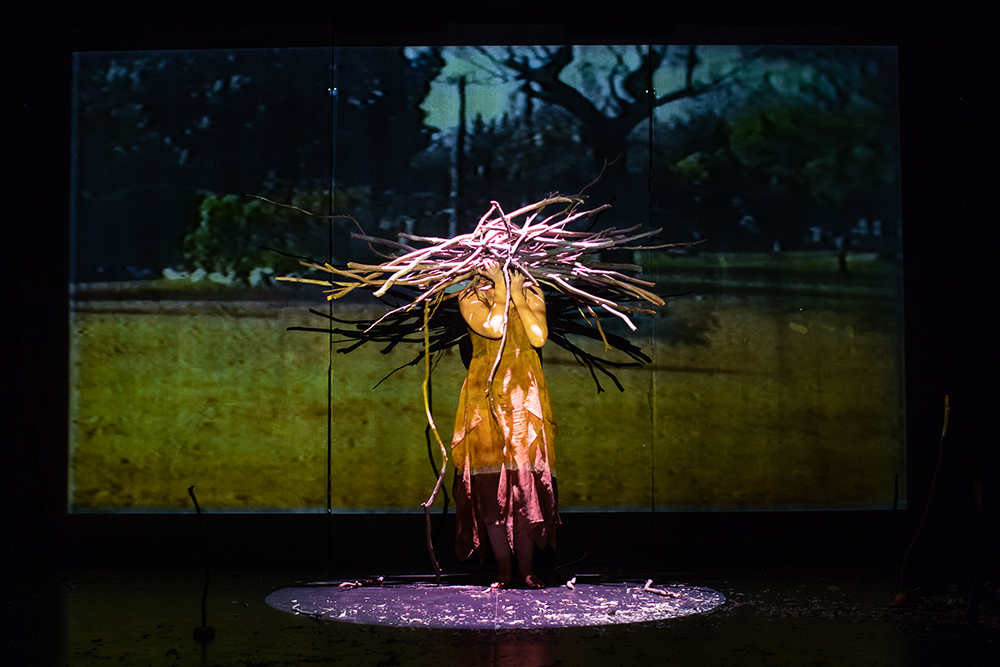 But this first act of removal will subsequently be reversed. We eventually circle back, just as home insists on being called back from afar. Maybe identification to a place comes stronger with knowledge of its lack, or after the sudden sorrow of estrangement.

I think this is what French is going for in the moments that follow. She enters a scene of dislocation that is akin to her migration to the city. Refractions of light spasm around the stage as she contorts herself in uncomfortable looking positions. The natural soundscape is replaced by the noisecore sounds of Tim Hecker. French twitches more on demi-pointe, but tips backwards every time, unable to stay rooted. No doubt, she vies for stability—an end to overloaded immediacy.

In another segment, video projections of Wiradjuri country are beamed while French crawls in the foreground, casting a black silhouette upon the scattered hills behind her. She drags a leaf across her skin, painting her unfulfillment onto herself, as if desiring to find a moment with the river. Later, she also pours a bowl of sand (from the Murrumbidgee riverbed) onto the nape of her neck in a baptism-like motion. A malleability, or intertwining of the contours, is inferred between French’s dancing body and the river with which she wants to commune.

But I think of the implications of these acts in service of the settler gaze—chasing and capturing a country where people have lived forever is itself a form of conquest, where white Australians can demarcate themselves with renewed identity. Landscape becoming (white) flesh, and vice versa.

Is French’s dance with the river analogous of the desire for the anguished white self to gratify its unresolved emptiness? This is overwhelmingly true in Australia, which, for a largely white and urban population, loves to draws its value and image from the metaphysical substance of the country (the continent, the land, the soil, the bush). Worship of ‘the Outback’, the Aussie swagman hero, Picnic at Hanging Rock, the infamous Qantas ad. The high spiritual reverence placed on the river within French’s work sits somewhat uncomfortably within this context.

Later, browsing the Internet, I read a poem by Natalie Diaz from The American Museum of Water (2019). She reminds us how bodies of water are always already an incantation of loss under the colonial enterprise on which our sociality stands:

…The first violence against any body
of water is to forget the name their creator gave them.
Worse still: forget the bodies who once spoke that name.

Whose vision? Whose river are we returning to? How to stand on this country at all? Writer Claire G. Coleman tells of her ‘ultimate travesty’, describing her intention to settle down in Australia, but ‘only when I can afford a home…to buy back some of my own Country, my grandfather’s Country.’ There are many stories like hers.

And in the end, we see a home. Or we see a vision of it, in all the pristine beauty of white normalcy. We shuffle back in time to French’s childhood. Cuts from dusty home videos are shown of a family life from years past: mum or grandma dressed in 60s frocks and siblings showering one another with water hoses in the impulse of summer. Meanwhile, French is standing in the centre, holding branches over her head like a roof. She drops them to the ground. The stage is a clutter of trees and sand. The screen sizzles to black.

In Australia, we have no immaculate past to return to. French’s imaginary river is comparable to a desert fever dream—appearing as an Edenic mirage attached with all the expectations of desire and bygone dreams, but the closer it’s examined, the further away it goes.

In five to eight years, the Bidgee will be dead, concede the Mutti Mutti Elders of the region. This is where the gap between the nostalgic desire for return and the failing state of conservation becomes most apparent. We only have to think of the ongoing neo-colonial practice of ‘aqua nullius’, which leaves First Nations voices outside how water is allocated and managed across the country.

After the performance, I think about the ready-made nourishing I take for granted when I say I wish to be ‘at home’. I’d like to think that it’s possible: a voyage of becoming for us all that doesn’t bow to the easy myth of belonging or demand a return to the past; one that sits apart from all the other fictions our nation likes to run on. Because, as Natalie Diaz says, even a river can be lonely, even a river will die of thirst.