Author’s Note: I recognise Sandra Bernhard’s ‘Little Red Corvette (Encore)’ (1987) as my source material, a source which I have quoted from liberally.

It must feel a bit condescending when a regional gallery sees that an inner-city writer has reviewed one of their shows, only to discover that the reviewer has spent a good chunk of their word-count talking about the drive. In March 2018, I visited Goulburn Regional Art Gallery’s exhibition Sauced Material, featuring works by Chris Bond, Ricky Emmerton, Tara Marynowsky, Daniel Mudie Cunningham and Nicola Smith. The show presents a series of works in dialogue with pre-existing media, and considers the processes of adaption and appropriation. Each artist suggests that representation plays a significant role in shaping how we see ourselves and each other, either through exposing the prejudice of existing narratives, or exploring their ability to be translated, reworked or remade.

It took me two hours and forty minutes to get to Goulburn, and the M5 is not a very scenic drive. I’m sure I could have gotten off the main highway and took those little backroads and by-ways to experience tumbling hills and farmland Australia; the kind of Australia where my car is at the centre, navigating the landscape. These are the sounds, sights and smells that I wanted to incorporate in my world view. I never wanted to depend on Google Maps and the NRMA.

I’d like to learn how to change my own damn tires, to jack up my car and get dirt under my nails and really live life to the fullest. I could have been the kind of person that took chances in life, but I was on a time crunch and had a prior appointment back in the city later that afternoon.

Recently, an art world darling gifted me a swath of their Sandra Bernhard album collection, which soundtracked my car ride to Goulburn. I found myself continually returning to ‘Little Red Corvette (Encore)’, the final track on Without You I’m Nothing (1987). As Bernhard closes her landmark one-woman show with a barbed ode to Prince, the purple paisley god himself, she wraps herself in all the myths of liberal Americana as both shield and skin to be shed. We are always creating hierarchies and narratives around the big city as the site where truly contemporary art (and the most progressive politics) is bred, but then struggle to grapple with the ‘other’ Australia: the suburban and regional Australia. ‘Little Red Corvette (Encore)’ plays to many of these conflicts about the centre and its surroundings, with Bernhard as protagonist both lampooning and paying tribute. 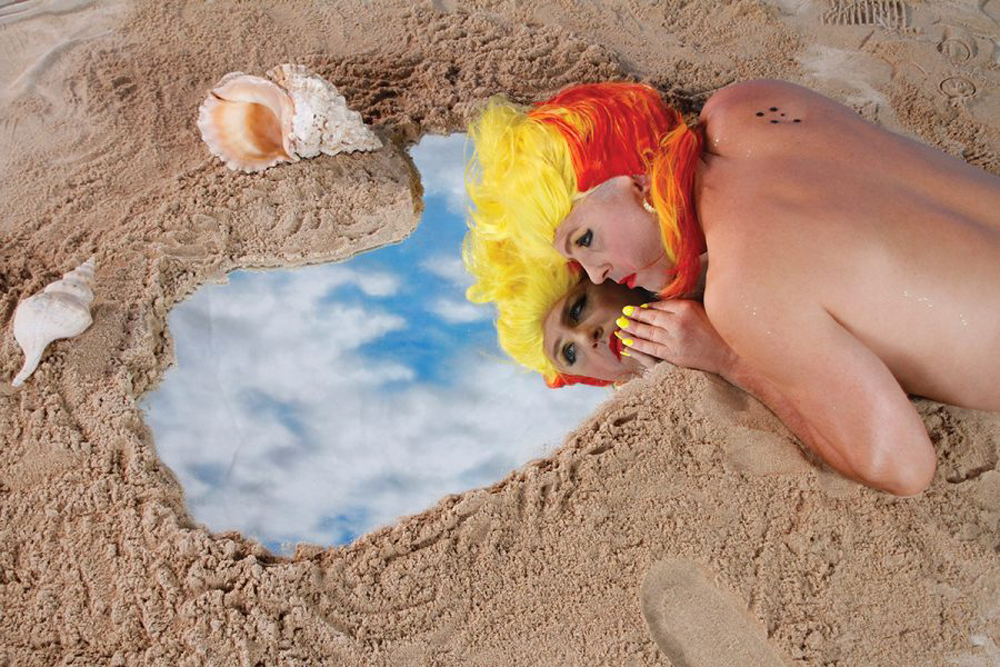 When I arrive at Sauced Material the first thing I see is Daniel Mudie Cunningham’s magnificently designed reinterpretation of Cyndi Lauper’s ‘True Colors’ (1986) music video. Here Mudie Cunningham has recast Lauper’s video with the retro true-blue Aussie symbols that shape how we see ourselves and are seen by the world. In mixing in new symbols that relate to a more inclusive queer and culturally diverse Australia, the work is positioned as an antithesis to the exclusionary mob-mentality that birthed the 2005 Cronulla riots. The artist uses Lauper’s track—itself a soundtrack of much LGBTQI+ activism—as a tool for challenging the way representations are weaponised to exclude.

Mudie Cunningham is many things, but more than anything I think he has always been a brilliant showman—a role well suited to reshaping the emotional and aesthetic narrative of 80’s pop music videos. In updating Lauper’s video to a contemporary Australian cultural context, the work reminds viewers of past constructions of inclusivity, whilst also advocating for their visibility in current media. It is through embracing the process of remaking that Mudie Cunningham not only spotlights the joy, but also the necessity of updating existing narratives and representations (whether they are cherished or otherwise) in our evolving cultural context. Our heroes should never be sacred and neither should their creative output.

While Mudie Cunningham is undoubtedly the razzle dazzle of the show, the real heart of the exhibition appears in Nicola Smith’s twelve oil paintings, each depicting shots that have been lifted from the Belgian-French film Toute une nuit [A Whole Night] (1982) by Structuralist filmmaker Chantal Akerman. The twelve paintings are presented together to give the impression of narrative progression, with the scenes each depicting characters trapped in thoughtful stares or wordless exchanges. 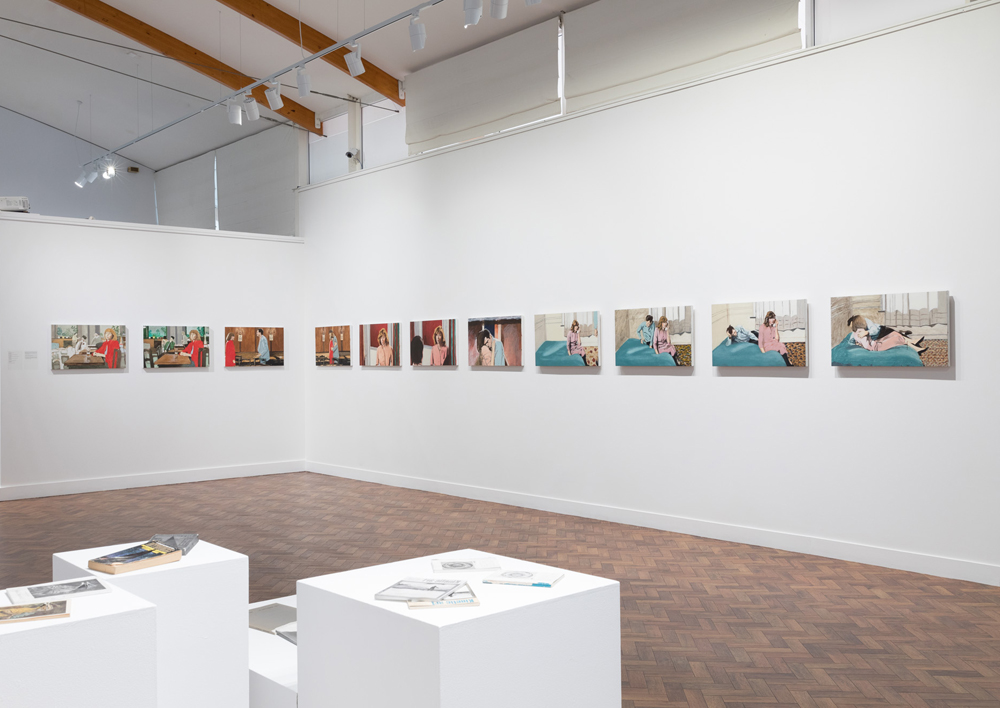 Smith has painted the characters with thin gauzy brush strokes, allowing peeks of sketch strokes and underpainting to remain visible, which, like the rolling of film, encourages a reading that the works have been produced in haste. The paintings wear the artist’s process, and in pausing on still images of a scene, Smith catches momentary slippages in the characters’ otherwise fierce façade. The characters’ emotions may be at the centre of these works, but it always appears as if these feelings are being pushed into the distance. This distance is further emphasised by the source material and palette embraced by the artist—reds and peach and grey tones—a palette more recognisable as part of a European, rather than Australian, cinema. But spatial or temporal distance is beside the point: we may not recognise the places or the people, but we can definitely recognise and remember the experiences of these feelings.

As I return to my car to start my nearly three-hour journey back to the city I realise something: I am a total phony. Regional arts have never really been a priority for me, and I rarely venture ‘out there’. This trip has been peak arts-writer tourism for this reviewer. I deeply understand that there is an importance to regional art spaces, but sometimes I can’t think if I actually do ‘deeply understand this’ or if it is just the narrative itself that has stuck. Is it just an inner-city narrative that we tell ourselves to make us feel better about the fact that we don’t visit these spaces enough? I don’t know if I will become that kind of person that moves beyond these inner-city self-congratulatory narratives, but for now, at least I can recognise why these narratives exist.