There is nothing
as invisible as a monument.1

A statue casts the dead into oblivion.
Memory fails and the ritual of building a statue
for the sake of having a statue
takes over.

Drift past these anonymous soldiers,
instead, crawl inside soft monuments and
remember—remember without seeing.
Know the past through abstraction, through
osmosis, a gust through an open window.

In a concave warmth
bathed in golden light,
the materiality of history
drapes over, is suspended from,
and floats through the absurdity
and banality of violence.
Banal indeed, like the furniture and
clothing of victims, invoking
the presence of loss and the
greater void of mass trauma.
What’s a skull to remember?
Or be remembered by?
The stupa at Choeng Ek stands
to pierce our memories –
amongst a century
of unimaginable catastrophes
it stands at a perfunctory scale,
made ugly in its objectivity.

But here inside this soft monument,
we’ve found a sound-proof chamber.
Away from history’s echoes.
Surround and enrobe yourself
in ghostly netting
and formless gold.

This is how an artist understands memory:

In an ongoing oeuvre that works towards
practicing remembrance. A continued effort of
reflection and detail culminating in a feat of endurance
for those who are gone                  for those who are still here.
Now tenderness alone connects us to the past,
and to places and times that are now
permanently disappeared.

Pure evil held a parade and marched
peacefully through the centre of their lives.
A genocidal regime murdered two million
and the psychological wounds
will not be healed with a statue.

A soft monument is for an unwitnessed death.

Cream-coloured netting, flecked and daubed in gold
pools like curtains or sheets hung out to dry.

Then a void will be
all we’re left with,
faced with the indignity
and terror of death.

Eight inanimate figures, then,
cast aside, ripped down.
These are domestic objects–
they are mosquito nets, they are spirits,
they are anthropomorphised, wailing, fainting.
Like an overspill of war,
the fabric bubbles up like seafoam
and surging in that turbulent foam,
the textured gold burns
welcoming and warm, reflective and cold.

It clings to the netting
pulling at it, slicking over it in parts
gently laid on in others

These eight figures—
solemn and bejeweled—
exist together,
and are stronger for it.

We are merely their spectators—
for there can never be witnesses
when a memorial is for grief,
and not for the act of violence.

A soft monument is for when pain is not contained
in the single moment but is present in everyday life,
in all interactions.2 The impalpable atmosphere of this space
creates an electric and transcendent representation of loss that defies
the Western tradition of featuring the body in records and representations of the past.3

If these figures are perhaps your own shadow
and if those imagined traces of life, glinting in the gold,
are fading from or emerging into the collective memory. 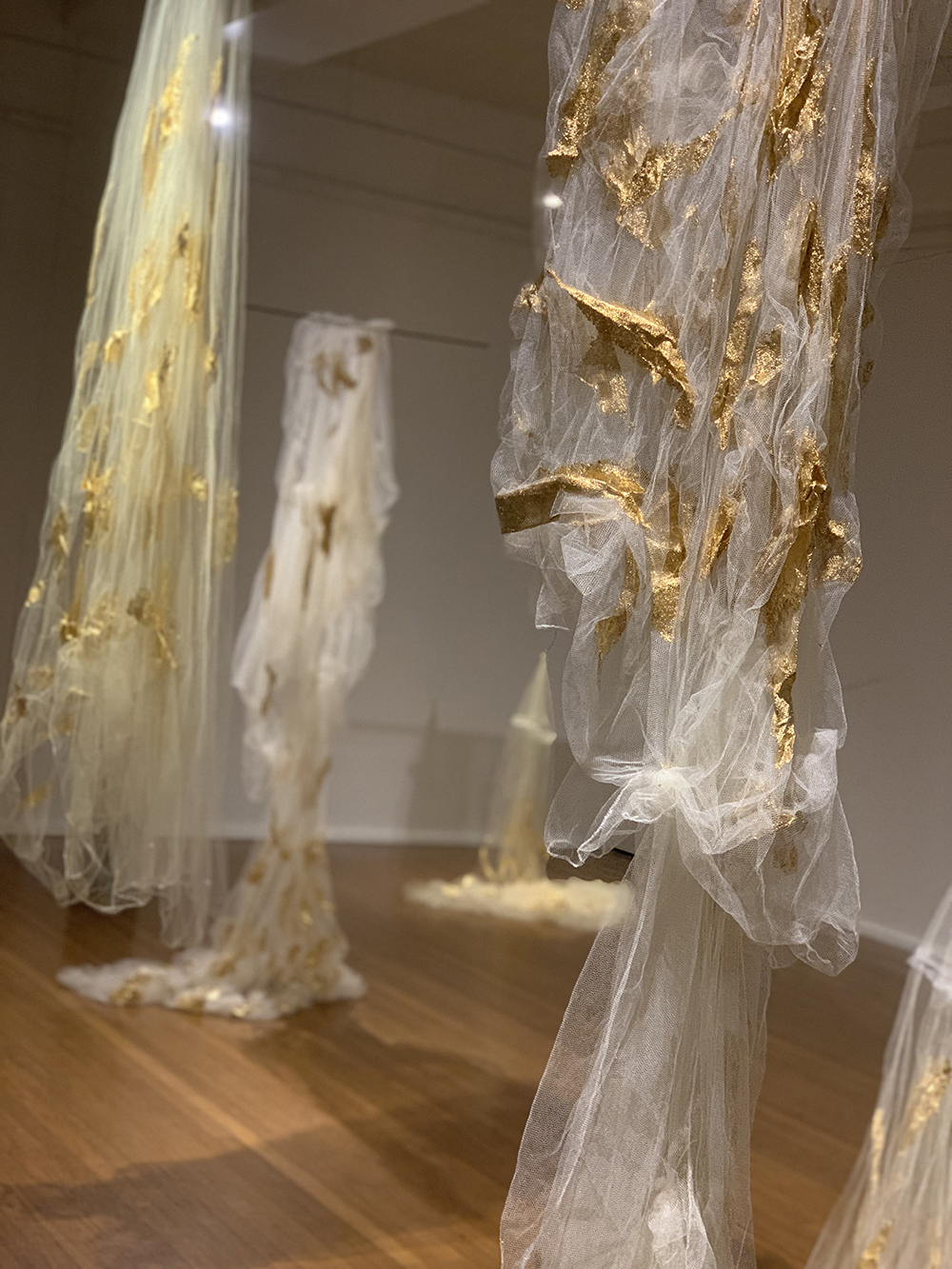