Carly Stone is Running Dog’s poet in residence for August and September.

Each month, a poet produces new work, which is distributed via Running Dog’s monthly newsletter—Stray. If you haven’t already, sign up to our newsletter. 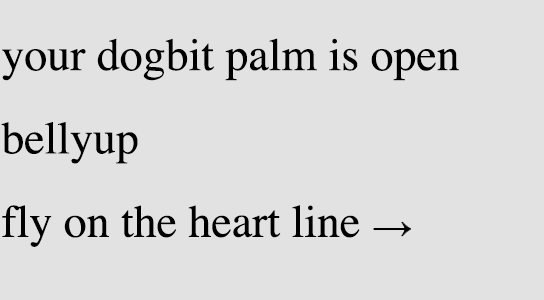 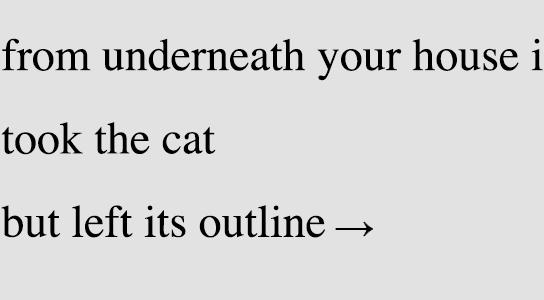 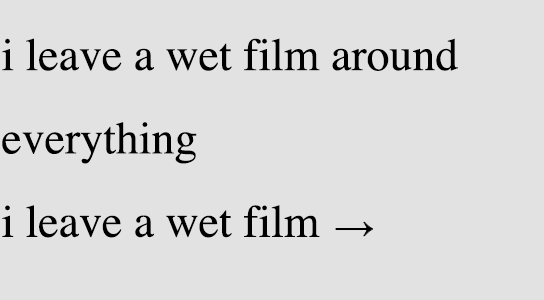 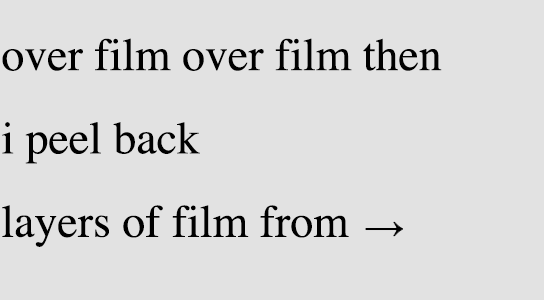 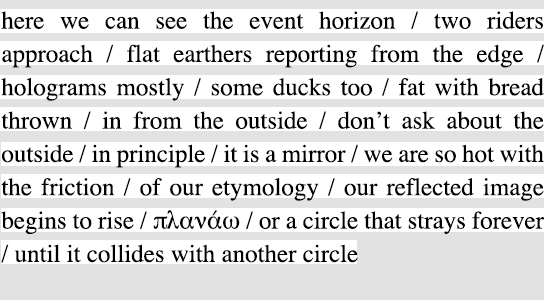 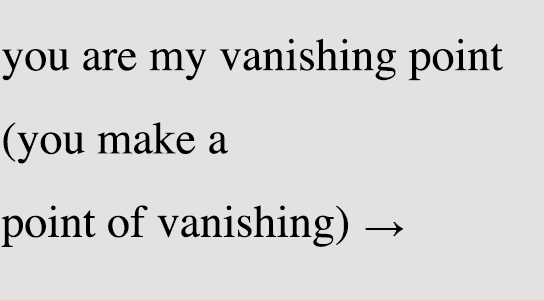 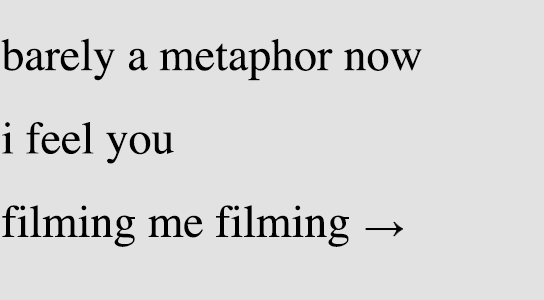 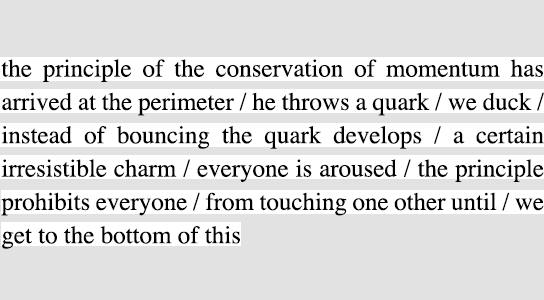 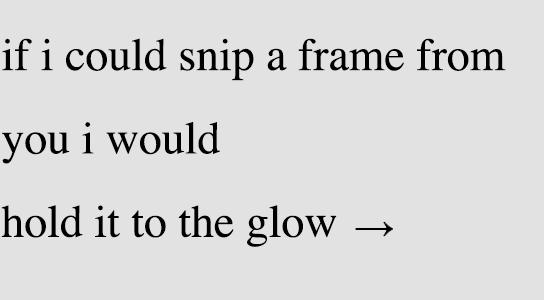 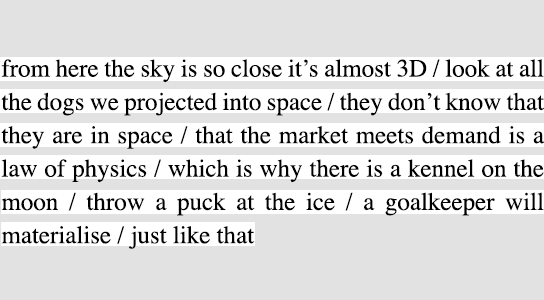 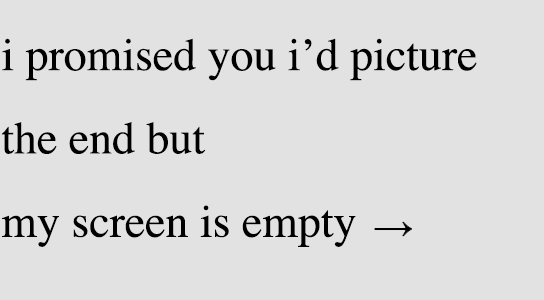 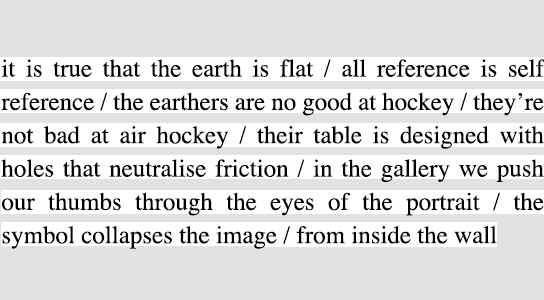 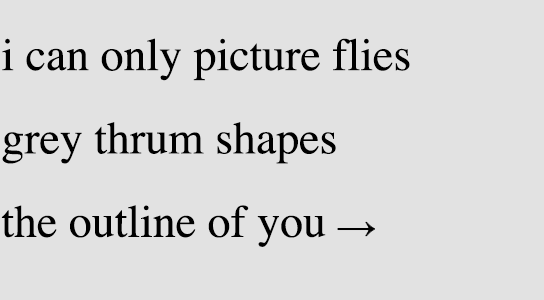 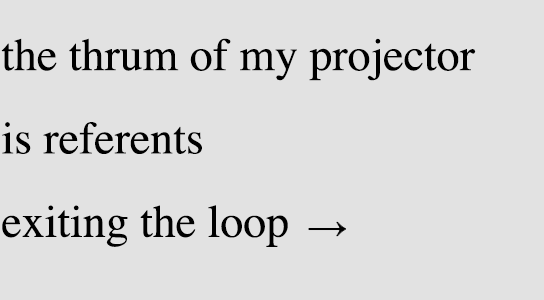 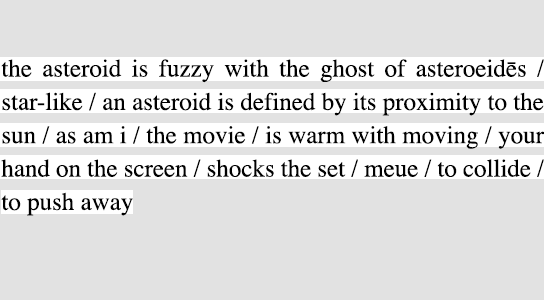 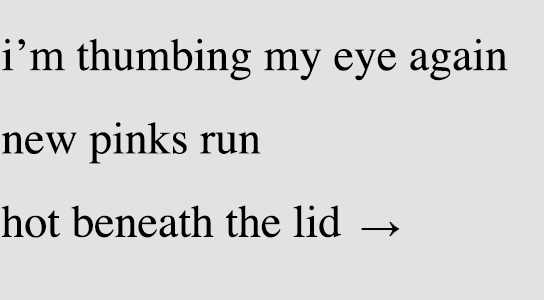 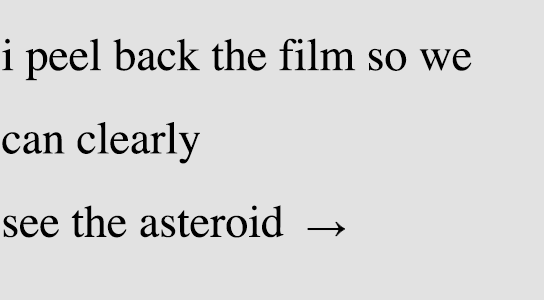 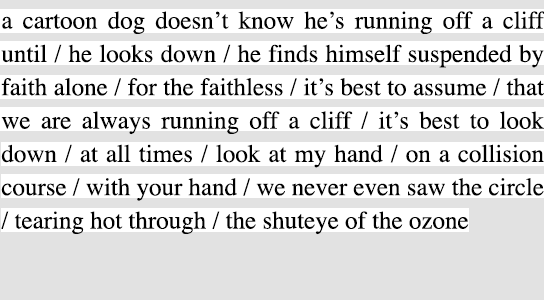 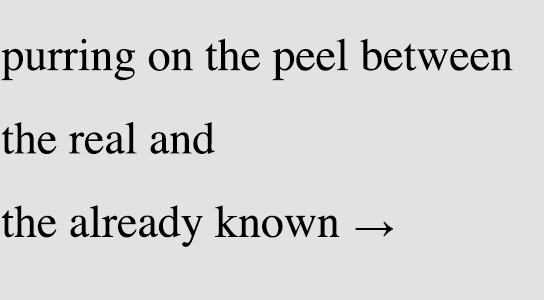 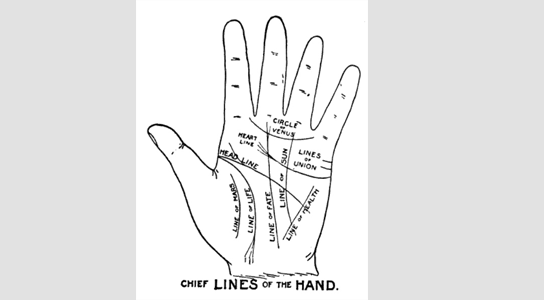 Here is the principle of conservation of momentum: so long as an object does not collide with another object, its momentum will remain constant.

During lockdown, I’ve become intimately involved with this phenomenon. Looping in my domestic groove, everything seems constant. Cooking, conversations, the circuits of the neighbourhood cats. To say lockdown is driving me nuts would be overly simplistic. But with no new external referents with which to correspond, my brain has turned inward, engaging a closed referential loop with itself.

This is the paradox of the first-person position: the I is at once referent and reference. By evoking the I, the self doubles and collapses inwards. This paradox is particularly familiar for queer speakers who, according to systems of gendered discipline, are compelled to occupy the simultaneous positions of surveyor and surveyed. There’s no explosion for us, either, just regress.

For ‘THERE’S ALWAYS THE ASTEROID’, I chose to oscillate between pronouns—I/you/we—to account for this exponential doubling that occurs as the gendered gaze refracts through the body. In the shadow of the pronoun are the two approaching riders, who are doubles of the figures in Bob Dylan’s watchtower. Then, in the shadow of the riders, there is the image of Bugs Bunny on horseback, and in his shadow, the coyote chased off the cliff. There is a continuum of doubles built into this poem.

Here is another principle: the indiscernibility of identicals. Two things can’t be one thing. There’s an ontological tension built into the double—Baudrillard identifies that ‘hypersimilitude [is] equivalent to the murder of the original’ and for me, this tension comes to mind whenever a word is repeated. Repetition complicates coherence because it suggests that the word or phrase is never finished; there is always the possibility for another iteration. Contained in the repeated word is the ghost of every past and future iteration. The repetition in this poem creates an incompleteness, emphasised by the rollover code which makes it impossible to see the whole poem at once.

Each repetition of the word film evokes, I hope, a sense of simulation; that is, of one thing attempting to be another thing. I’m referring here to Baudrillard’s simulacra: a system of simulations so warm with inter-referentiality that the references unstick from their referents, like a film wobbling on the surface of hot milk. Or rollover GIFs lingering over text.

For Baudrillard, the simulacra points to the end of momentum, or at least to the end of meaning. This is the event horizon. From here emerges the collective feeling that reality is winding down to a final moment that never comes because this ending moment is on loop forever. In the ’70s Sontag wrote that the ‘apocalypse is a long-running serial’, which speaks, I think, to TV as a mode that simulates life, and life as a mode that in turn simulates TV. The episodic style of the TV show can be easily synthesised into our highly simulated and repetitious environment, where everything seems to be looping in on itself forever. In the simulacra, all reference is self-reference. If there is no asteroid—that is, no external force to interrupt our momentum—then everything will eventually be absorbed into the flat surface of the simulacra.

The flat surface is the subject of many contemporary conspiracies. The curvature of the earth, the curved trajectory of the quark, sceptics’ distrust in the flatten the curve campaign. Why is the curve such a prominent subject of conspiracy? Maybe it’s because the curve lends itself to the circle, which is the shape of paradox.

This poem is scaffolded by the shape of the paradox, and also by the shape of the house, which might be understood as a third dimension produced by the 2D surfaces of walls and a floor. I hope it can start to trouble the idea of self-reference and the flattening of reality. It takes interest in the presences inside the wall and floor. The cat beneath the house, the dog in space. The figure in the mirror. The πλανάω inside the planet. The quarks inside everything. The spy behind the portrait, poking through the face to make eye holes. The real eye contained inside the simulated face.