This is the first article in a series produced in partnership with Sweatshop: Western Sydney Literacy Movement and Diversity Arts Australia, as part of the StoryCasters Project.

Growing up Black in Australia meant living with subtle, but frequent, acts of discrimination. My white friend’s mother was always glad to have me over. She’d take pride in the fact her son was able to find well-mannered friends; she’d tell me how glad she was I wasn’t ‘like the others.’ I took pride in her words. But when it dawned on me exactly what she was referring to, my pride turned to shame, then into anger. As I became more aware of her comments, and less receptive to them, her demeanour also became less welcoming.

It’s my belief that Western society has cultivated a belief system that demonises the use of anger in activism. It is a construct that represses minority communities most of all. You’re not allowed to fight for change and be radical. You’re expected to struggle within the system. An Appropriate Reaction, featuring the work of Tabita Rezaire, dismisses this construct—it a show that is as unique as it is assertive, giving no ground to the beliefs of a White settler society. The exhibition responds to the words of African-American writer and civil rights activist Audre Lorde: ‘Anger is an appropriate reaction to racist attitudes, as is fury when the actions from those attitudes do not change.’ Using anger as a dominant force, Tabita Rezaire—alongside contributions from Māori musician Matariki, Indigenous artist Hannah Brontë, and collective Black Birds—tackles racism head-on within the context of contemporary life, while also redefining the position of women of colour in the Australian arts.

From the twentieth century extending to the present day, minority groups have led many social movements, demanding acknowledgement of, and freedom from, the systemic oppression faced by these communities on a daily basis. Movements calling for the abolishment of Apartheid in South Africa and the recognition of Indigenous land rights have been a few of our struggles. In some kind of twisted irony, many such movements have been disarmed by the empty apologies of a White authority.

An apology can turn an oppressor into a victim; it can stunt activism by creating a false sense of progression, luring many to believe that they’ve ‘done their part.’ In my lifetime, there was Kevin Rudd’s ‘Sorry Speech’ in 2009. Following this announcement, many of my peers and elders felt that—even though they had just discovered the unspoken history of settler Australia —Rudd’s apology concluded the plight of Aboriginal communities.

This use of the weaponised apology is diametrically opposed to Audre Lorde’s notion of anger in social activism: ‘anger expressed and translated into action in the service of our vision and our future is a liberating and strengthening act of clarification.’ It is this type of liberation and strength that sits at the core of An Appropriate Reaction.

Rezaire’s multimedia installation, ‘Sorry for Real’ (2015), begins with an incoming call from ‘The Western World.’ The work is presented as a phone call, with text message bubbles popping up every once in a while in response to whatever The Western World has to say. The voice personifying this world is monotone and automated, the kind one hears on shady bot phone calls. In a nonplussed fashion, The Western World recites a dry apology: ‘I’m sorry for institutionalised patriarchy warping women into contributing and enforcing it.’ 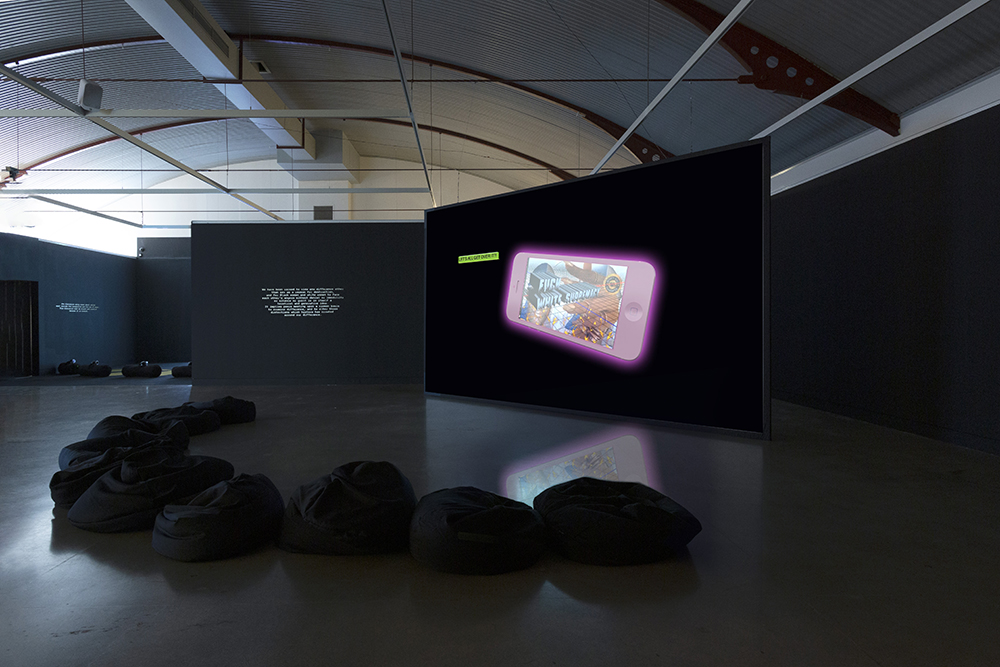 The Western World’s automated voice apologises for racism, patriarchy, misogyny, transphobia, White superiority, nature/technology, ironic White saviours and the institutionalisation of these concepts. Here Rezaire uses millennial humour with a satirical blunt delivery, which works to show how fake and forced the concept of reconciliation is. The only productive thing about this disembodied apology is its acknowledgment of the extensive damage done across generations. But this is absurdist humour on Rezaire’s part. The Western World is characterised with an apathetic demeanour. In the real world, these communities would never receive something as straightforward as full acknowledgement.

I was raised in a forgive-and-forget household. My mother and father both worked full-time jobs, so it was up to my siblings and I to keep each other out of trouble and maintain our Cartwright house. Being the youngest of four children meant I’d rarely get my way. Nobody looks to the baby brother for leadership. To my older siblings, I was another responsibility who needed to be looked after, but not listened to. But being seen, and not heard, was difficult for me. If I challenged my siblings’ authority, it would devolve into petty arguments that would lead to punishment from our parents. My only choice was to forgive my siblings for the misunderstanding, and forget my frustration of being unheard.

Amongst the artworks exhibited I felt the strongest personal connection to ‘Sorry For Real’. I saw my own experiences of clemency emulated within the work. Rezaire uses the narrator’s apology as a test: when you forgive someone who is insincere, you enable them to cross you again. It’s an attempt to lure the viewer into forgiveness. A forgiveness that represents ignorance towards generations of tortured societies. Rezaire is quick to remind us Indigenous and Black folk to stay vigilant through the text bubbles, stating that ‘the intentions of the western world are not in good nature.’

Rezaire’s next video work, ‘ASS4SALE’ (2015), plays like a history lesson on the importance of twerking. As Rezaire simply puts it: ‘we twerk to remember, we twerk to protest.’ It is only in the twenty-first century that the act has come under the scrutiny of Western media—a particular form of scrutiny that targets and shames people of colour. After this year’s Super Bowl, featuring performances by Jennifer Lopez and Shakira, the FCC received 1,312 complaints, in part for the use of twerking. There are examples of this within ‘ASS4SALE’: one section displays the YouTube comments posted on videos uploaded by a user called Look At Her Butt, which  range from ‘twerking = stupidity’ to ‘Black women you think Angela Davis or Maya Angelou would be proud of you?’ 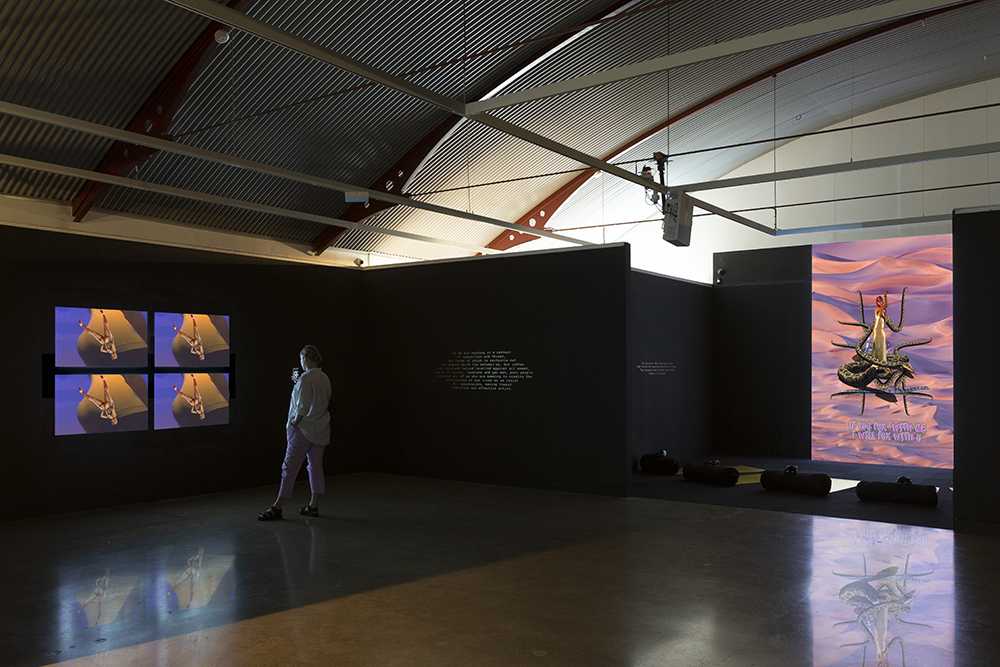 Even though act of twerking is often disparaged, White communities have still gentrified the move, claiming it as a trend. ‘ASS4SALE’ incorporates a radio interview with Miley Cyrus, who discusses how popular twerking has made her and how good it has been for her publicity. In 2013, Cyrus rebranded herself as a ‘subversive’ pop star—the main attention grabber being that she now twerks. As the Wall Street Journal claimed in ‘Miley Cyrus is Twerking All the Way to the Bank’, this move allowed Cyrus to directly profit from the appropriation of Black culture. The narrative that develops throughout ‘ASS4SALE’ suggests how racist opinions create a paradox in what is and isn’t acceptable depending on your race and status. Rezaire illustrates how biased points of views control what is considered moral and immoral, and how these are used to establish the grounds for prejudice.

The last piece presented as part of An Appropriate Reaction is ‘Peaceful Warrior’ (2015), a guide to self-healing meditation. Rezaire, who is a known practitioner of Kundalini yoga, leads us through a radical self-love experience. The journey towards decolonisation begins within. Meditation of any kind isn’t a part of my daily routine but, given it’s part of the artwork with yoga mats provided, I gave it a shot. I sat down with my legs spread out on the mat and awaited further instructions. At the centre of Rezaire’s piece is the idea of unapologetic pride. She encourages women to take pride in their own bodies, to feel comfortable in their ‘power outfits’, find strength in ‘womb power’ and open their minds to ‘pussy booty magic.’ Rezaire achieves this through directly talking to the viewer, and also communicating via the text that pops up on the screen. At one point, there are clips of her performing different poses atop of an ancient Egyptian backdrop. I felt as if Rezaire was motivating me personally: ‘if you fux with me I fux with you.’ In ourselves we create a world free from White social standards, I fuck with that.

If we were to place Tabita Rezaire’s work in the box of Western society, we’d attach labels such as ‘radical’ or ‘countercultural.’ But Rezaire’s work exists outside of White Eurocentric thinking. Instead it is a contemporary and highly engaging way of calling out the crimes of Western culture, which so often hides these underneath shallow apologies. Rezaire’s work is like a safe space, somewhere I could reflect and assemble my thoughts before stepping back into the fray of society as a Black man. In the footsteps of Audre Lorde, An Appropriate Reaction leads with anger, and leaves with pride.