The above two entries detail just some of the objects and materials I could identify in Michael Stevenson’s two installations, presented as part of the artist’s solo exhibition at Fine Arts, Sydney. The mathematically versed titled of Stevenson’s show—Disproof does not equal Disbelief—establishes a body of work concerned with faith, pedagogy, worldviews, and evidencing. Here, the artist continues his unique practice of assembling ready-mades, found objects, and archival material, by placing them within new custom-built vitrines. In working with this ephemera, he does not completely reappropriate their everyday forms, but rather produces new and expanded meaning through their interrelationships.

Stevenson’s exhibition is modest. Only two installation works ‘for-the-wall’ are present within the gallery space: ‘Drum Shield Affordance Extension 1.1 Extravehicular Activity’ (2020) and ‘Drum Shield Affordance Extension 1.2 Philanthropy 101’ (2020). Upon first approach, they offer nothing but a blunt and overwhelming feeling of confusion, namely because of the intense accumulation of information and imagery that crowd the custom vitrines. The literalness of the items presented makes Stevenson’s works both surprisingly impenetrable and resistant to cohesive conclusions. With this wealth of source material and references, it’s hard to know where exactly to begin, or end.

Assorted within these two uniform vitrines are collections of objects, paraphernalia, and imagery that examine two wildly different central characters: astronaut James Irwin and the wrestling superstar Hulk Hogan (whose legal name is Terry Gene Bollea). The shelf bases are wrapped with stretchy Lycra, printed with a pattern of a church carpet floor, while the backing boards are made of acoustic foam, which then serve as a pin board for some of the items and images.The two-dimensional orientation of these display cases (similar to a relief) means that certain dimensions of the objects (and the information they afford) become hidden or obscured. 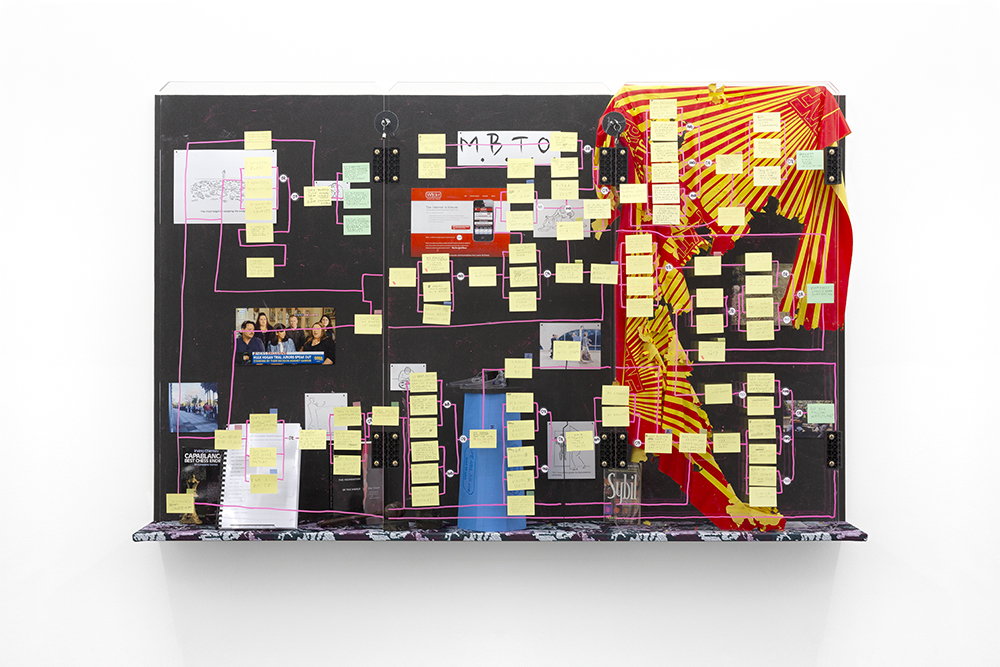 In addition to this, Stevenson has adapted a five-faced Perspex drum shield: folding the shield into three triptych-like sections, creating a type of  faux ‘glass’ panelling for the vitrines. The drum shield, which isolates sound, is often used by the ‘worship bands’ that play for modern evangelical congregations—loud drumming troubling the delicate and devout experience of reverence and communion. (A helpful consequence to this approach is that the displays neatly condense elements from Stevenson’s previous bodies of work into a more apt commercially-viable format.)

‘Drum Shield Affordance Extension 1.2 Philanthropy 101’ visually narrates the story of Hulk Hogan’s successful lawsuit against the media site Gawker for leaking his sex tape. Unknown to him, the entire lawsuit was covertly funded through a shell company, which was being run anonymously by venture capitalist Peter Thiel. An early investor of Facebook (and current board member), and a deeply private man, Thiel himself was also a victim of Gawker’s sensational breaches of privacy when they outed his gay relationship with long-time partner Matt Danzeisen. The penalty to Gawker in the Hulk Hogan case—a $140 million payout—was so financially devastating the company had to close immediately due to bankruptcy.

On the exterior surface of the drum shield are handwritten post-it notes, which Stevenson arranges in a confusing, almost paranoid, flowchart tree. Conspiratorial in nature, the notes read out the type of speculative questions and prescriptive statements that could originate from an obsessively-unhinged individual narrator. In fact, these post-it notes derive from live Tweets made during the Hogan case, dispersing this singular voice into a cacophonous discourse of various opinions and arguments; some empathetic, others critical. Photos of jury members, lawyers hurriedly entering/leaving the court room, WWE fans and an American Ibis bird outside on the courthouse grounds are placed haphazardly on the acoustic board.

The work not only documents the lawsuit as it happened with live Tweets and news coverage of the trial, but also the conspiratorial discourses that shape the interpretation of these power dynamics. The identity of Hogan is characterised as unstable—separated ambiguously between the everyday man Terry Gene Bollea and the hyper-sexualised-macho wrestling superstar Hulk Hogan.

Significantly, this distinction served as the central question for the lawsuit: whether the sex-tape depicted Bollea or Hogan, Gawker arguing for the latter in its defence.

Stevenson engages with this split identity by structuring his characterisation through material allusions that are varyingly manipulated, explicit and strange in their arrangement. A pair of custom sports-performance Oakley sunglasses sit atop a dry-ice container. Secretly tucked behind this is its New Zealand flag case-pouch (no doubt also referencing Thiel’s influential NZ citizenship). Draped on the right panel is a shredded latex print of a Hulk Hogan World Wrestling Federation (WWF) banner. The shredding of the WWF latex is physically confusing; it looks as if it has been paradoxically shattered and torn simultaneously, with small flake-like shards dispersed underneath on the shelf. Directly alluding to Hogan’s performative practice of ripping apart his leotard in a spectacular masculine fury, this material is instead presented as delicate and perturbed—corresponding to the surprising vulnerability expressed by Bollea during the trial.

‘Drum Shield Affordance Extension 1.2 Philanthropy 101’ is a contemporary tale of intrigue and revenge, although coming to this simple characterisation is difficult. The same allegorical drama and deeply referential detail usually seen in a classical history painting is converted into a saccharine story about justice, the media, and power.

Eighth man on the moon and born-again Christian, astronaut James Irwin is the central character in the other exhibited vitrine—‘Drum Shield Affordance Extension 1.1 Extravehicular Activity.’ The ‘Genesis rock’ Irwin and his team discovered on the Moon—which is dated to be 4.15 billion years old—was, to him, proof of a Creationist ‘Genesis’, where a divine maker had constructed the universe in six days. While on the moon, he talked eagerly of the Bible and professed to having a spiritual revelation that would reenergise his Christian faith after years dedicated to the more rational sciences. Irwin’s idiosyncrasies are explored in Stevenson’s practice, who dissects these sites of tension to help clarify and comprehend the motives that inform Irwin’s unique worldview and lived experience. 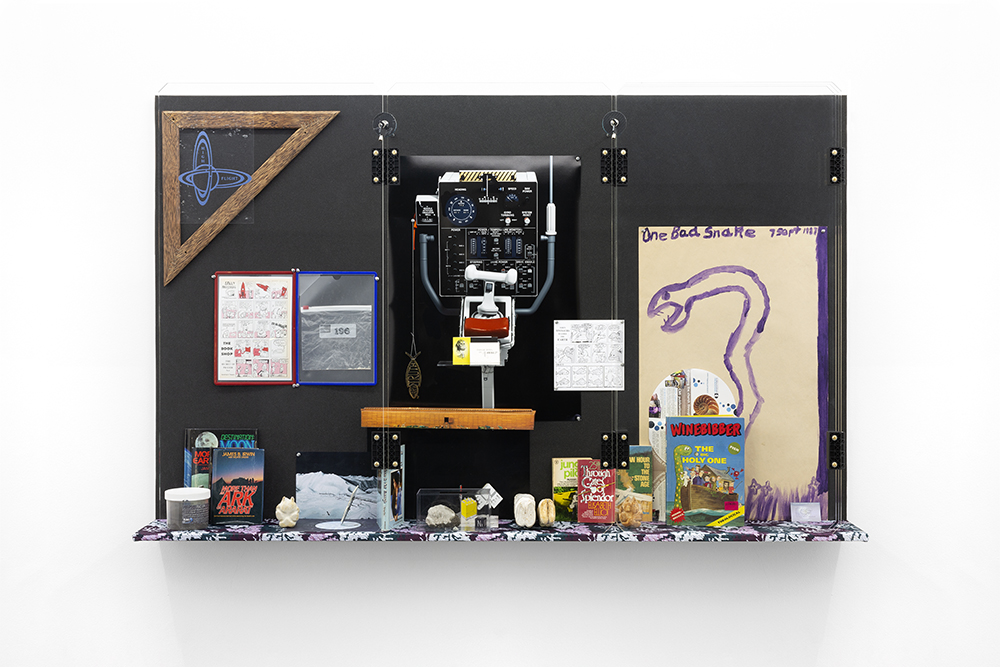 Symbolic and technical examples of transportation are central concerns in Stevenson’s display. Notably, a DIY educational paper model of Noah’s Ark (with dinosaurs comically lined up to board) stands juxtaposed to a 3D digital render print of a NASA Apollo lunar rover cockpit. For all they appear as opposites, key similarities between these two items become clearer when contextualised with Irwin’s beliefs. Both heroically traverse extreme, almost prophetically transcendent terrains: biblical floods and a celestial body. Each are technical marvels, one with a contested history that Irwin sought to resolve with expeditions to Mt. Ararat in Turkey with his evangelist High Flight Foundation, and the latter, a great example of NASA’s mechanical engineering.

Stevenson examines these intersecting truths via imitated substitutes like a fake NASA Lunar ‘Genesis’ Rock Sample #15415 placed next to pairs of cast animal hoofs. Likewise, claims to rational and religious truth—whether pertaining to the artificial materiality, or underlying discourse embedded in many of these objects—culminate in a container of synthetic Moon dust ‘simulant’ and a polished Icythys pendant labelled ‘TRUTH’ gobbling up a lesser ‘Darwinian’ fish. The artist himself also includes a small autobiographical work within the vitrine: a naïve painting on cheap paper of ‘One Bad Snake’ (1987), made when such dilettante paintings of small-town religious New Zealand were Stevenson’s primary focus.

These strange contradictions, combined with the clinical edifice of the work, create a sense of unease. As a result of its representational context, another juxtaposition arises: the items function as aesthetically charged symbols while also operating as pre-existing artefacts, all with their own unique origins, utilities and interrelationships.

The aesthetics of petroleum by-products:

These installations even smell new. The clean visual textures and systematic labelling of such items certainly resembles the anthropological modes of display common in corporate or educational environments. However, Stevenson’s artistic approach also prioritises the aesthetic qualities of these objects, and their visual assembly, over such overbearing contexts.

As a consequence, viewers are allowed to appreciate the formal construction of the vitrines with all their varying textures, colours and compositions.

The attention to detail—even for the most simple or overlooked of elements—is a testament to this approach. Stevenson does not seek easy material solutions, and doesn’t intend to reveal the aspects of the work that remain physically hidden or obscured. By withholding these attributes from the viewer, he privileges the ‘object-hood’ of the elements. It’s somewhat frustrating to try to identify what is unknown yet palpably present in the work. But what Stevenson summons through this dilemma is an elemental distinction between seeing and knowing, and how the conspiratorial or speculative can easily emerge between this mysterious lacuna. Where it’s common for pedagogical displays to promote informational forms of communication, the satisfaction of fully ‘knowing’ what Stevenson disseminates is instead continuously deferred or complicated.