In Renaissance Italy fig pendants were carved out of coral or stone in the shape of a fist, a thumb poking between the index and middle fingers, and then carried to ward off the evil eye. Representing a phallus in a vagina, it was believed that witches would be driven to distraction by the pendant’s sexual overtones and forget to set their curses. In Ancient Rome, fascinum phallus amulets were worn by men, women and babies for good luck. In Medieval Britain, the sheela na gig, a carved stone displaying an exaggerated vulva, was frequently mounted above the doorways of churches and civic buildings to ward off evil spirits.

The best works in Jess de Wahls’ Big Swinging Ovaries recall these ancient talismans: there’s a series of mandalas made up of interlocking vulvas and a uterus bursting with delicately embroidered plants and flowers. In their botanical exuberance these pieces are reminiscent of Fiona Hall’s ‘Paradisus Terrestris‘ (1989-90)—a series of intricate sculptures constructed out of sardine cans, which depict small trees sprouting from roots in the shape of human sexual organs. 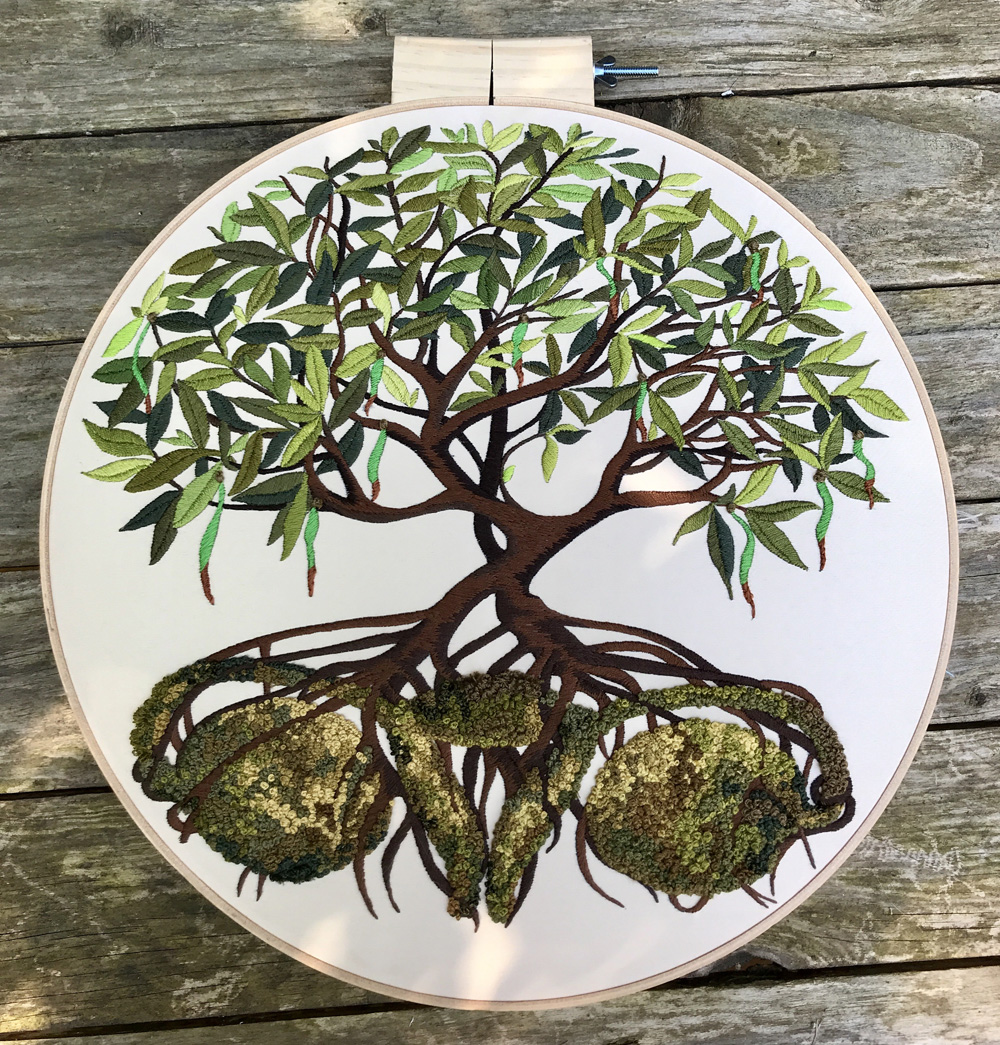 On display at Platform Gallery in Katoomba, an exhibition space curated by Kelly Heylen (commissioning founder of the creative industry group MTNS MADE), Big Swinging Ovaries is the first Australian show for London-based de Wahls. The artist has built up a significant profile through sharing her work on social media, where she also sells commercially manufactured iron-on patches featuring her designs.

Social media platforms like Instagram have become more than a tool for connecting work to audiences, with many independent artists generating income solely by selling prints and merchandise to followers. This is a distribution method that favours granular expression, as demonstrated by the success of illustrators who are able to tell a complete story in a single frame (such as Celeste Mountjoy (flithyratbag) and Liana Finck), or the sentimental snapshots of poetry that have made Rupi Kaur an international bestseller.

It is fitting that de Wahls found such success on social media, as the images she creates seem perfectly engineered to fit within a single Instagram frame. Some of the most recent and more overtly political works in the exhibition, ‘Prolife’ (2018), depicting Florida anti-gun violence protestor Emma González, and ‘Metoovaries’ (2018), featuring a crowd of celebrities who have spoken out against workplace sexual harassment, have the flatness of the photographic images they replicate. But these particular works are lacking the virtuosity and wit of other pieces in the exhibition, which resonate more strongly with the historically embodied female experience of repetitive handcraft. 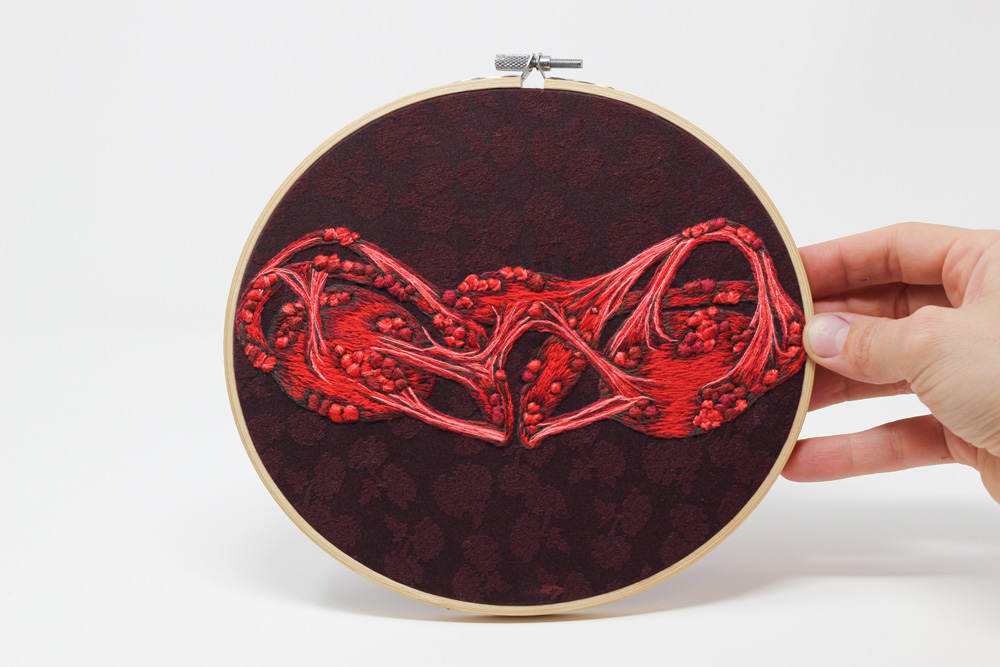 Similarly, two other smaller works, ‘Bovaries’ (2017) and ‘Kahlovaries’ (2017), which overlay the iconic features of David Bowie and Frida Kahlo over a pair of ovaries, seem more like memes than autonomous artworks. And while the proximity of the two in the exhibition presumably indicates that the two figures are united in some way by their troubled relationship to biological femininity, the complexity of that relationship is not parsed.

The exhibition text quotes de Wahls’ acknowledgement that not all women have the organs depicted in the embroideries, stating that in her work she ‘explore[s] societal ideas of what it means to be a woman: from governments tying to restrict and legislate what women do with their bodies, to society judging women for both having and not having ovaries.’ Yet in the exhibition itself, biologically female organs and menstrual products are used predominantly as a kitsch shorthand for women’s bodies and politics, without exploring the complexities of living as a woman with or without those organs.

Most notably, in the latter category, is Judy Chicago’s ‘The Dinner Party’ (1979), a mammoth textile and ceramic work depicting a huge dinner table with place settings decorated with yonic designs and inscribed with the names of significant women throughout history.

I am sceptical of artists who state that their intention is to reclaim traditionally feminine crafts in order to explore political themes, as de Wahls’ does. Such attempts fail to acknowledge the deeply political context of domestic craft, which has served historically as a way for women to record their experiences and aesthetic tastes without mediation. There is, however, a similarity between this history of domestic craft and the way that female artists are using social media to circumnavigate gatekeepers and find an audience. It is a platform that enables underrepresented artists to push against the traditional hierarchies that underly gallery endorsement, to cut across genre, and to slip easily between commercial and artistic endeavours. And given Instagram’s restrictive community standards on nudity, it is also fitting that de Wahls has used the platform to share her genital iconography, reclaiming the ancient talismans stitch by stitch by stitch.