This is the third column in an ongoing fiction series about the creative process. You can read the second column, Shooting Days, here. 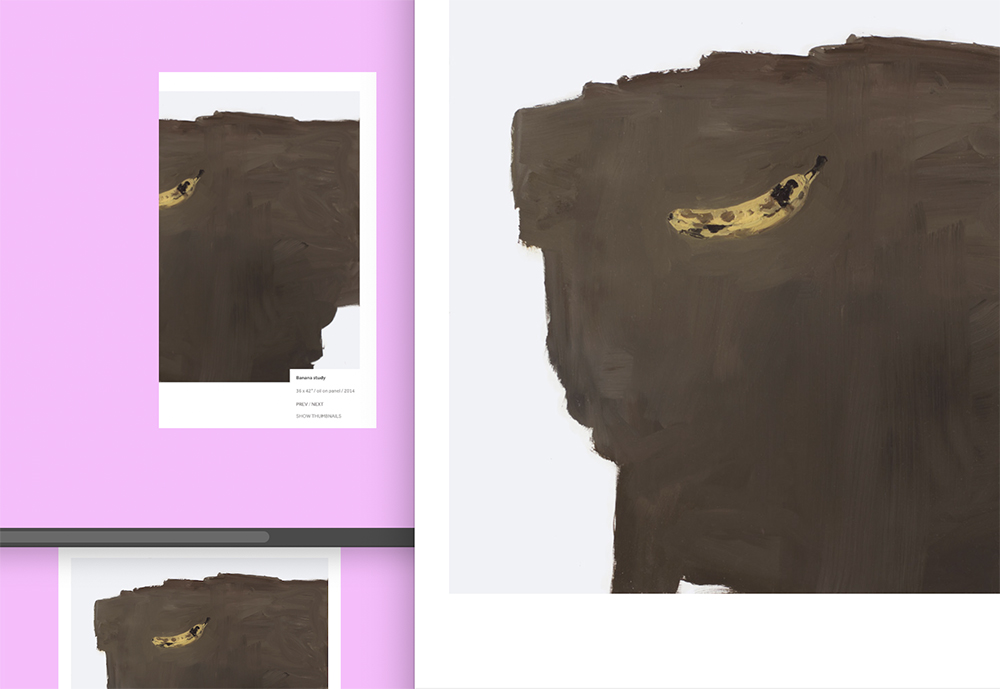 Hito Steyerl is wearing a hooded, puffy jacket and a pearl earring. The soft light fogs around her face. Behind her, blurred and muted through the lens, peak hour traffic. The jacket is a bulwark. To be a great woman you need the extra padding. A lifted phrase: these are the ripped and cut bodies the economy wants to see—isolated in their homes, producing themselves as subjects beset by mortgages and the perpetual guilt of not being fit and lean enough. A fall is part of the contract.

The first step to becoming a great woman is to build a website.

Another kind of shell: a great building built by a great man.
NB: The building’s greatness is not in dispute.

It was a clear day and I approached the entrance from the south. The facade was designed to look like a glittering shell, or the side of a fish, or Ana’s sequinned jacket (by now long abandoned). A narrow walkway connected this translucent, sculptural face to the building proper, a glass walled box, set lower than the street and surrounded by a gutter of green. For a moment, I stood suspended in the canopy of fluttering leaves, breathing in the smell of rainforest dew. Then an escalator delivered me to the lobby, where Ana was waiting.

We walked through the interlocked gallery spaces together. We had different tastes. I was reading Elaine de Kooning’s diaries; she was reading The Wretched of the Screen. I wanted to know how it felt to exist in relation to a great male painter; she didn’t believe in great men or painting. I don’t believe in great men anymore, but I still believe in painting. Like right now, I’m looking at a photograph of a painting on an artist’s website. It’s called ‘Banana Study’. In it, a splotchy banana sits in a sagging field of brown. Painted with loose, visible strokes, the field looks like a collapsing pool of soft, warm pudding.

As we approached the room that held de Kooning’s women, Ana talked about Steyerl. There was an essay she kept returning to. It wove together commentary on debt and guilt, synchronised dance sequences in early twentieth century films, bubble architecture and a multichannel video installation cut together from YouTube fragments. ‘It’s about these things,’ she said, ‘but it’s really about how, as women, our bodies are subject to being cut and recombined by the forces of commerce and production.’

But wasn’t all this—the essay’s fragmented form, the torrential prose, the obsession with eye-machines and the surveillance image, the body in the world (now digital)—an extension of the questions of form that de Kooning asks in his Women paintings?

I didn’t say this aloud, because I knew Ana’s response: the way de Kooning reconfigured, abstracted and erased his women’s bodies, contorting them into the ground of the painting, was an act of male violence and that questions of form could never be untangled from the artist’s perspective—a perspective that was, in this case, informed by a nexus of gender, whiteness and time.

The whole of it made my head spin. I suspected I was the kind of girl who was foolish enough to believe in her ability to think for herself. A girl barely aware of her own complicity in upholding a system that privileged the few and drained the many because here I was with wealth enough to spend drifting in a foreign country and I didn’t want to change any of it. Ana’s devotion to Steyerl was proof of how little we were marked by the world, and my resistance to reading confirmed it.

In the park, Ana asked me to come to her reading group. I was holding an elm leaf and pulling the blade from the midrib and didn’t answer straight away. Overhead, the leaves rustled and the shouts of children playing baseball on the grass caught the warm breeze. They were reading Silvia Federici, Ana said. Of course, who else. I crumpled the leaf between my thumb and forefinger, and then said, yes, I’d come. Truth be told, I was staying in Ana’s apartment.

‘This question of reproduction, I think, is essential. How do you manage the labour of raising a child without losing your ability to work? How does childcare become a shared concern, instead of the problem of the mother?’
Years later, I’d edit an interview with Federici about surrogacy.
‘Domestic work, sex work, child raising remain the occupations in which most women across the world are most present, even when engaged in other forms of work.’
Throughout the conversation, I noticed Ana kept turning to look at a woman who wore deep plum nail-polish and spoke with her hands. Her name was Sylvie. She wasn’t wearing a bra.
‘Choosing to be childless, to live without a partner, to live without family, means having a degree of wealth.’
‘You need money to even consider these decisions to be choices.’

‘For me, the question is how to get respect for my work.’ The woman speaking was a filmmaker whose first, award-winning film had been jointly directed with a man. In the years since she’d directed several features, but none had received the same level of attention.
‘I’ve been thinking about Margarethe Von Trotta, the German film director,’ she said. ‘Why is it that the film she made with her husband is considered more worthy than the films she made on her own?’
‘And her career,’ she went on. ‘Who in this room knows her work, or has heard of her?’ She turned to the woman sitting beside her who shook her head.
‘I don’t know much about film though,’ the woman apologised.
‘That was the 1970s. Sometimes I think we’ve made very little progress.’

On the floor of her apartment, Ana kissed Sylvie’s breasts and Sylvie stroked my cunt and then my mouth was around Roman’s cock. As far as I knew, Roman was Ana’s boyfriend but now I wasn’t so sure. I don’t need to explain the rest. It was fucking and afterward, nothing.

That night, a dream I’d had years earlier came rushing back. My cousin called and we arranged to meet at a cafe she liked. I hadn’t heard from her for some time and she apologised for not being in touch. ‘I’ve been going to these meetings,’ she said, ‘and there aren’t many people I can talk to about it.’ Soon after, another friend called and wanted to meet at a place called Dante’s. I thought I knew it but when I googled to check the address, it wasn’t listed and the place I’d been thinking of was called something else altogether. I decided to meet my cousin and then take her to find my friend but when I arrived, she wasn’t there. I sat down and began leafing through a newspaper that had been left on the table. Time passed. When I called to see how far away she was, someone else answered. With the unfamiliar voice crackling on the line, I noticed everyone was white and dressed in similar clothes and in an instant, I understood my cousin was trapped in a cult and that now, I would be tracked and harassed until I couldn’t take it anymore. I knew my cousin hadn’t meant to betray me, that she was unhappy, and that she knew I would try to find her and get her out. But I also wished she’d never called at all because the responsibility of knowing was too much.

Author and professor Brene Brown’s strategy for dealing with naysayers and unproductive people-pleasing is to identify her five Most Important People. She suggests making a shortlist of those who really matter in your life, or as she puts it, ‘would help you move a body.’

Helping someone move a body more often than not leads the friendship to dissolve.

I had a strong idea that writing was a studio-based activity, that it was a practice. And it wasn’t writing about something else—the writing itself was the practice.

Fucking as practice. In the underground carpark of the building built by the great man, she fucked. She fucked standing. She fucked sitting. She fucked on her knees and on her back. She fucked against a damp concrete ledge with wet gravel stuck to her skin and her hair. The painter she was fucking was mediocre. His subjects were bland, his strokes laboured. His nails were clean. His conversation, hard to follow. She couldn’t remember his name. It didn’t matter—his cock was hard enough.

In the stairwell between the studio and the conference room she fucked a junior designer. In the room laid with industrial carpet, she fucked a middle manager. Flush against the curtain wall she fucked a structural engineer. In the tiled stall of a public bathroom she fucked an associate producer. Sex belonged to institutions. Frosted offices, corridors, meeting rooms, elevators. Low plasterboard ceilings, Vertiface room dividers, sliding doors. And the colours. Institute red, academy green, blue flecked grey and whites that weren’t quite well. The materiality of accidental sex. Raw concrete, swimming pool water, heavy-duty carpet, couch grass. Polyester, cotton blend, viscose, leather.

What do you want people to feel when they walk out of the theatre?

The thrumming body, a different writer would write.

In the library, there were zones where the pleasure of the text met the pleasure of fucking. Lean your breasts over the cold steel shelf and hold onto the heavy bookends. Here, in the dark, endless stacks you could fuck between the shelves. Tacky, movie bullshit—the blooming life of wilful ignorance in a vault of dead letters.

That was where I’d meet Matthieu between classes. On the afternoon I told him I was leaving he was reading Barthes’ Mythologies. I used that phrase, ‘it was over between us’—a phrase that haunts me because whenever something begins, it’s already over. ‘But how will it be any diff’—The screen explodes with colours. Lines scraped from the celluloid wobble across the frame. Splotches of dye, blue washing over red, becoming purple. Starbursts. Paint dripped onto the surface of the film and left to run in spidery lines, dancing now, colliding. And then we’re back to the story, Matthieu is looking uncertain and I’m back-pedalling out of there as fast as I can because the look on his face is making me feel confined and all I want is to be flying up the escalator at the station, free of his need.

I realised I was trying to make something that couldn’t hold together. I knew the arguments against it but the closed, resolved thing didn’t excite me and failure did. A lifted phrase: Better to have your failure right in front of you than the fantasy in your head. To leap and crash—that’s where the drama was.

The banana in ‘Banana Study’ isn’t Andy Warhol’s banana regardless of whether you want to connect them. It seems unfair that a single artist should claim the fruit. After all, there are so many bananas in the world. Just last night I put a bunch of green bananas in a brown paper bag and this morning they were tender and sweet. Looking at the painting again, the brown field looks more like mud than pudding, applied in smeary patches. Look, a block just there, that heads toward black and then a ridge, just here, of the warmest reddish brown. Little banana, so soft against the ground.

If you don’t have a logo you can create a logo using the free logo maker.