This is the second column in an ongoing fiction series about the creative process. You can read the first column, Deep Sleep, here. 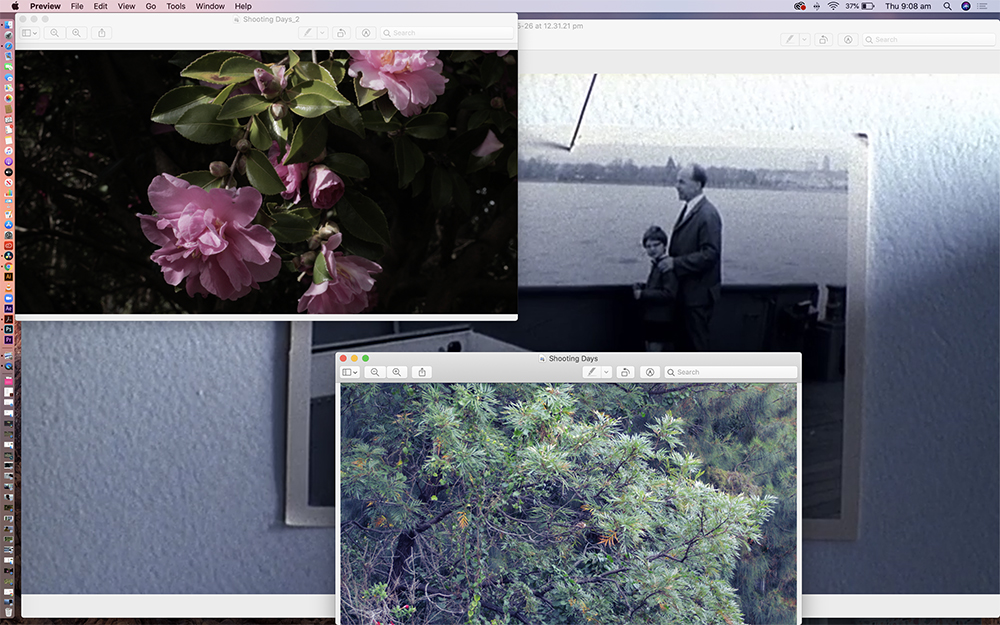 There’s something I haven’t told you. I dream.

A lifted phrase: I don’t think you’d stay at something for 15 years when no one’s interested unless you have something—like ‘I’ll show them.’ Something is there.

I was sitting in the cafe across the road from my studio. Reading back over the scene outline, I promised myself this time I’d follow through. Uncommon images pulsed through the pages. I dug into my well of positive affirmations, told myself the work had meaning and let my inner voice buoy my mood. But when Adam appeared in front of me, I slammed the lid of my laptop shut. Adam made me jumpy like that.

‘What are you doing?’ he said, sitting down.
‘Nothing,’ I said.
We spoke for a while about his latest success: grant > book > award.
‘I want to write a book on Bonnard,’ I said. ‘I’ve spent all week staring at a gorgeous, rustling landscape and it’s so restful. I want to write something slow and out of time.’
‘Aren’t you writing a pilot?’ he asked.
Everyone was writing pilots and my manager wanted me to write one too. ‘Then I can shop you around,’ she said. I’d agreed to think of something but all I could come up with was an unsophisticated rehashing of an ordinary-person-deciding-to-become-a-private-investigator comedy and a disjointed Twin Peaks-like nightmare where a group of indifferent friends encounter a series of mysterious indoor electrical storms, neither of which had any chance of attracting attention.
‘I want to spend time looking at paintings,’ I said. ‘Anyway, I can do both.’
I brought up our missed encounter from the day before.
‘I waved at you and you walked right past.’
‘I mustn’t have recognised you,’ he said, ‘you know I have face blindness.’ We spoke for a while about the problems of face blindness and how awkward it was to appear rude.
‘Maybe I should smile and wave at everyone,’ he said, ‘as a precaution.’
‘You’ve always wanted to be liked,’ I said. He didn’t disagree.

That afternoon, I watched a documentary about an outsider Russian family on a curated streaming service. The film was made by a French man when he was in his early thirties. Reading his Wikipedia entry, I discovered he’d won a prestigious award for the documentary and some other prizes for other films. Looking at his list of achievements made me feel bad. I found myself scrolling through an image search and thinking about masculinity, colonialism, and the privilege required to take a private helicopter over the Taiga to film a family living on the fringes of society. In the middle of the film, two men hunt a bear in the forest. The camera watches as they cut off the bear’s hands and feet and collect the heavy pelt. Later, we see a child wearing the bear’s feet like big fluffy slippers.

I didn’t want to watch the web conversation between the filmmaker and the curator. I pressed the bloated arrow three times but each time I drifted. An article on Zoom aesthetics, an essay on the history of red zones and quarantine in Italy, a diary film shot eleven years ago, on mini-dv. In that film, a girl sits in her kitchen in sweatpants and tells the camera about sex. She’s not sexy, she says, that’s the problem. She explains: if she tries to move in a sexy way like a girl on TV, it looks ridiculous. She films her dog, a fluffy eared, pixie-faced terrier. She films her friends, flesh on flesh, crowded around a mirror together and then dancing at a club, flesh on flesh, with other, unknown bodies. She films her feet walking in different weather and in different cities. She films her feet pushing the pedals of her bicycle across different ground. She films the skinny legs of a guy at the beach who asks her if he can meet up with her in Jerusalem. She’s not interested. Her camera drifts to another guy, burying his friend in the sand. Later, in Jerusalem, she films the street through her new doorway with the zoom set at different lengths; close, far, in-between. The dog eats poison at the market and dies. In a scene so noisy and unstable it looks like tears, she digs a grave and buries his body in the woods.

The last shot: a deflating Dora the Explorer balloon drifts up from a walled courtyard and catches on an overhead wire.

After the image went black, I pulled out a box full of hard-drives and mini-dv tapes. I wondered if hard-drives stopped working in storage and if I should move the files onto solid-state drives, but the thought of waiting for the files to pass from one container to another was exhausting. I plugged a red hard-drive marked DV Transfers into an adapter. There was a clicking sound, a long breath, and then a neat orange icon appeared on my desktop. I scrolled. Dead .fdx files, bad acting by people who were no longer friends and a folder labelled Random Shooting.

Car movies. Blurred brown and grey warehouses. Canola-yellow fields, charred bush and glimpses of azure sea. Different drivers in the rear-view mirror. Travelling backwards, the charcoal road through dusty hatchback glass. A long stretch speeding through pine forest grown for wastepaper products, followed by wild empty shoreline. The shot drifts down from the heaving scrub sheoaks to a beached jellyfish, kelp grazed as the tide rolls over and out.

Art school openings. Girls goofing off for the camera. A girl, about 23, describing a boy she’s infatuated with. ‘Sometimes I look at him,’ she says, then pauses, drags on a cigarette, ‘and I can’t believe he’s my boyfriend.’ When the boyfriend, already balding at 25, published the novel he’d spent years dreaming, it was shelved under Experimental Fiction and soon after, fell out of print. A lifted phrase: Ask yourself, where do you want this story to go? What do you need to do to get it there? I wanted to discover something from back then that would lead me into a moment of everyday drama, but I didn’t.

I swam laps and thought about the girl on the tape. Her face is lit by wine and streetlight. A waiter walks through the back of frame and, for a moment, turns to look at us. I hear my voice from behind the camera say, ‘Tell me something else.’ I hold the shot still, keeping frame. She laughs, not sure where to look. She blows smoke toward the lens. Eventually, I turn the camera off. A lifted phrase: I wanted to touch every part of it, to understand how it worked. I began to learn what turned it on and the things that turned it off. Low resolution dissolves the edges of things, as if time’s disintegrating.

She read somewhere that around the age of 35, women experience a spike in anxiety. For her it came later, but then, she was always late. She could pinpoint the exact moment her anxiety hit its limit point. It was in her 37th year and she was in a car travelling down a Los Angeles freeway. As the car sped under a stacked concrete overpass a line of small burning fires appeared on the road ahead. Notice the body: her back tensed. ‘They’re flares,’ her husband said, irritated. Later, she googled road flares. A lifted phrase: road flares are the universally understood distress signal. The traffic surged and stalled and surged like a gush of clotted blood toward a choking, stroking heart.

Notice the body: she delayed. At her request, the sales attendant turned the key in the lock and slid the glass back. When she curled her palm around the camera, it felt light and sure. She flipped open the screen and turned the lens ring. The store swam into focus. It was the camera she wanted but it cost more than she had. The one beside it was smaller and more limited, you had to adjust the focus with a small plastic joystick which made it difficult to pull, but she liked its watery colours, the pinks in particular. When she signed the docket she had to fight a thudding in her chest. In the train she twisted the bag’s bright yellow handle around her wrist and then changed her mind and put it on the floor between her legs. ‘Be casual,’ she whispered, ‘no one cares.’

Shot: A child curves his neck to nestle his face against a duck’s lifeless body.
Shot: A child’s muddy hands plucking the feathers from the duck’s watery, pocked skin.
Shot: A swarm of black insects around a child’s matted hair.
Shot: The dawn sunlight filtered through thickly wooded spruce.

I wanted to do something about utopia and autarky. It could have been many things. It could have been a fiction or photographs…it was not specially a documentary project but I wanted to meet people living in a very remote place who decided by themselves to leave civilisation and to start a new place from nothing. You know, this area of Siberia is where you have the cliché in your mind…poverty, violence, a very tough way of living. The winter, it’s so so cold and then in the summers there’s so many mosquitos, so it’s not a comfortable place. What was quite crazy was I didn’t know anything about them, I didn’t know if they were still living there, if they would agree to meet me, to discuss, or just to welcome me. So that was a very strange sensation, to travel such a distance with absolutely no guarantee of anything at the end.

This is how the filmmaker describes the impetus for the film.

I walked to the crumbling stone cemetery a few blocks from my apartment and lay on the ground, watching the breeze bother the reedy shoots of grass that sprout through the lawn. I thought about collecting the image and putting it in a film and about how I would describe the scene. A lifted phrase: Are you committed to the endless writing and rewriting necessary to succeed? A woman lies flat on her stomach in a graveyard behind a church. The grass sways, tender gold thread.

And then a cut.

There’s something I haven’t told you.