I had been rewatching Buffy the Vampire Slayer, the defining show of my youth, at the same time as writing this piece. I was thirteen when it first aired in New Zealand and I became immediately obsessed. Buffy is a sassy, badass teen with fast quips, who literally kicks ass, and has a vampire for a boyfriend. As a young, brown girl growing up in a small town in New Zealand, this was escapism at its finest.

When I first began to work on this essay, I thought I wanted to write about isolation during the pandemic. But, as 2020 delivered even more blows, the thought of writing about ‘unprecedented times’ just didn’t seem right.

My Uncle had passed away.

When my Grandfather died, I was lost for years. When my Aunty passed away, I cut all my hair off. This time, I obsessively played a game called Wildscapes on my phone.

Since then, I’ve been thinking about the ‘The Body’, a Buffy episode from Season Five. There is a particular scene where Dawn, Buffy’s younger sister, is in art class. The student’s are drawing a statue of a female sculpture, and we see close-ups of her curved body bent with hands above her head. There are sounds of charcoal on paper—the scratch it makes as it glides down the page, the lines mimicking the curve of the statue. Buffy enters the room, grabs her sister and the two leave the class. A conversation unfolds outside, where Buffy tells Dawn their mother has died. This exchange is shot from inside the drawing room, with the camera looking out and the sound muffled by the glass windows of the classroom. As Dawn collapses and cries, the scene ends with a shot of a student’s drawing—it seems they are outlining the negative space around the figure. The part we cannot physically see.

When commenting on the radical empathy depicted in Buffy, Sophie Gilbert writes that this particular episode ‘presents a realistic experience of grief, reaching out to viewers who’ve endured it, and making it more comprehensible for those who haven’t. In tackling the less familiar aspects of death—boredom, shock, awkwardness—it offers a more truthful depiction of bereavement.’ This is why Buffy the Vampire Slayer was so pivotal for myself and for others—it had a way of using monsters as stand-ins for realistic social or societal issues.

Take the episode when Buffy loses her virginity with her vampire boyfriend, and the latter loses his soul and turns evil. Or the storyline depicting the cult of young men at a frat house, who drug young high school girls and feed them to a demon. Then there is the robot who poses as a man named ‘Ted’, wooing Buffy’s mum before revealing his violently abusive tendencies. In another episode, Faith, also a vampire slayer, accidentally kills a human and has to deal—or not deal—with the consequences. Rewatch the story of the invisible girl who is ignored and teased so much she eventually fades away, before deciding to exact her revenge. Buffy is the chosen one, the girl to save them all. 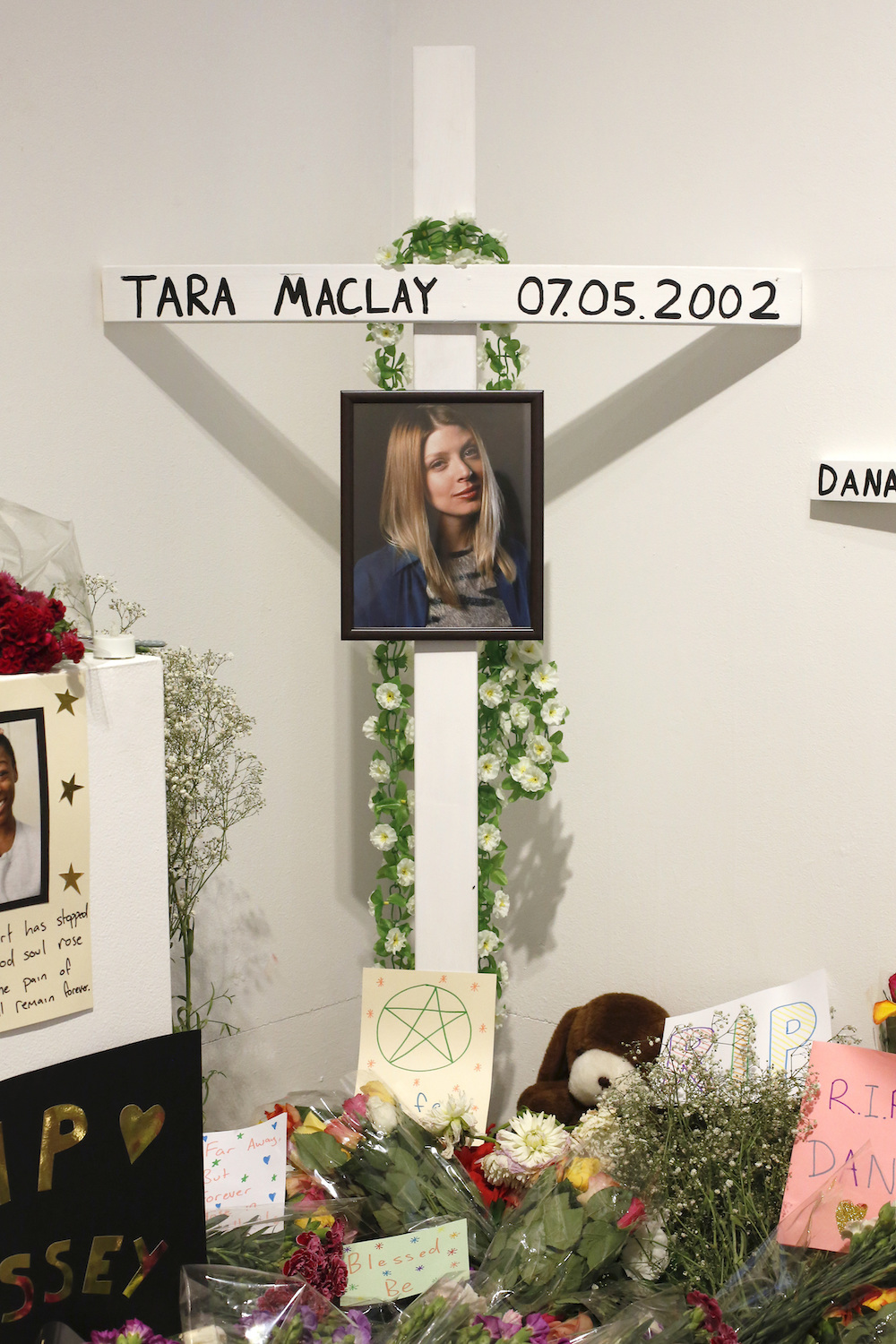 No matter how outlandish the series may have seemed to most of my friends, to me it was weird, exciting and funny. It represented all of my pent up, angsty feelings. Over the course of my obsession (dating from roughly the late 1990s), the internet started to become more widely accessible. This meant fan communities, forums and message boards were able to flourish.

I have vivid memories of sitting in the cold, rumpus basement at my family home—hoping the screeching dial up wouldn’t wake up my parents—as I connected to others around the world. I consumed anything (and everything) I could find: Spoilers! Theories! Other people who hated the character Riley! I taught myself Photoshop and HTML, made amusing fan art (BUFFY AND ANGEL 4EVA), and even dabbled in a little fanfic.

My fondest memory of those times was receiving burned albums by musicians I had never heard of—Tegan and Sara, Nada Surf. Living in a town with two CD stores that offered only Top 20 hits, this blew my mind!

In his analysis of new media and fan culture, Henry Jenkins suggests that ‘fandom, after all, is born of a balance between fascination and frustration: if media content didn’t fascinate us, there would be no desire to engage with it; but if it didn’t frustrate us on some level, there would be no drive to rewrite or remake it.’1 My interest in Buffy lay in the fact that I could relate to the plights of a teenage girl trying to save the world and kill vampires. But fandom was also where I was able to extend this obsession via the friendships, conversations, and fan art I made.

But fan art is not where it ends. The influence, or exploration, of these ‘fascinations and frustrations’ reaches beyond the television or computer screen. Artists have long explored facets of fan culture, and it’s only natural that this part of our formative selves would have an outlet in a gallery space. In 2017, Sydney-based artist Zoe Wong created the work ‘Lez We Forget’, a grouping of shrines dedicated to lesbian characters who died in different TV shows (such as Tara from Buffy and Poussey from Orange is the New Black). The work was influenced by the notion of the ‘lesbian death trope’—a phrase invoked by online fan communities to make TV shows more accountable for scripting the premature death of lesbian or gay characters, all for the sake of a straight cis- character’s development. Wong’s shrines emulate the kinds of memorials we find on roadsides, or at the sites of large public tragedies. Outsized white crosses, with photos of each character and their death date, are surrounded by handwritten notes tucked in amongst plastic wrapped bouquets that read ‘Stay Strong’ or ‘Forever in our hearts.’

For Wong, fandom and popular culture are about seeing herself represented on screen. As she suggests, ‘when I was younger and coming to terms with my sexuality, I didn’t have a lot of queer friends or a big queer community, and so I gravitated towards these characters on tv shows that sort of made it okay for me to be gay.’

While the media as a mirror image is a prevalent theme in the white cube, artists are also considering the voyeuristic spectacle of media personalities. For the 2019 exhibition Do you know this feeling?, curated by Sebastian Henry-Jones, Sydney-based artist JD Reforma presented 275 images en masse in the work titled ‘Why should I be sad?’ Scrawled across each of these images were motivational messages, such as ‘Stay away from people who make you feel you’re hard to love’ or ‘she believed she could so she did.’ There were memes that featured North West, or a dog with his face squished against a couch overlaid with the words ‘when I am mad at someone but they ask if I’m hungry.’ On reading about the details of the work, it became apparent that Reforma’s installation was constructed out of a collection of motivational images, all sourced from Britney Spears’ Instagram account. When I first saw this work, I immediately went to Spears’ account to see if she really did post that much motivational content. To my surprise, she did. 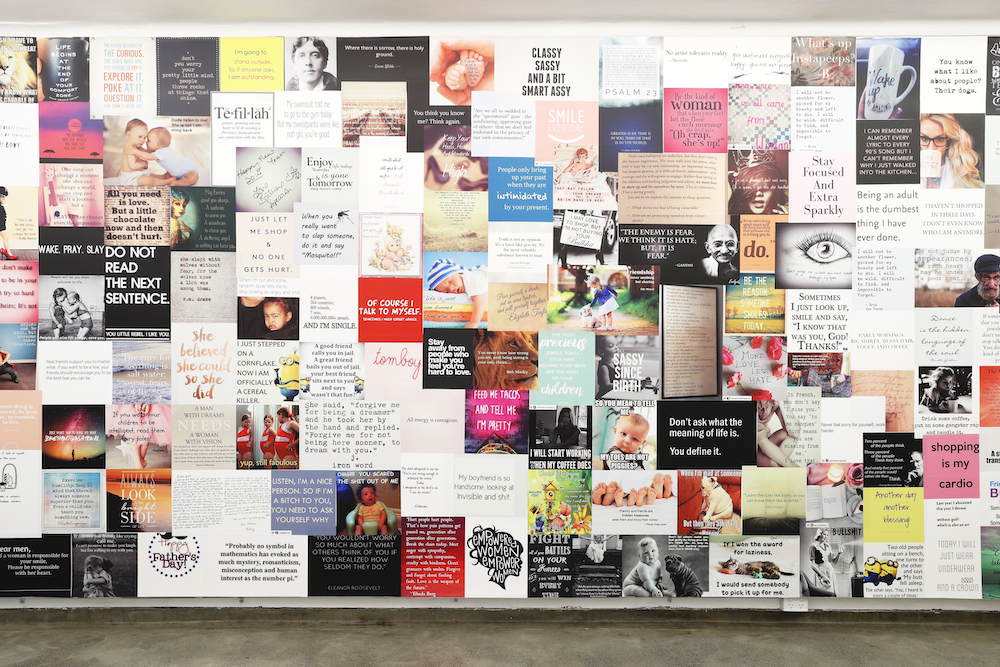 JD Reforma, Why should I be sad? (2019)
Image Credit: Zan Wimberley, courtesy the artist

Reforma takes a satirical and darkly humorous approach to fandom and the cult of celebrity. But the context of ‘Why should I be sad?’ has morphed with the recent #freebritney movement. That is, despite her age and successes, Britney’s father James still has control over most of the singer’s life. He was granted conservatorship after she was hospitalised for 72 hours after a breakdown. Yet what we see via social media, and the images presented in Reforma’s work, is a supposed happy-go-lucky pop star. Fandom, for Reforma, is about exposing what is beneath the heavily staged and slick surface of celebrity. Now when I look at ‘Why should I be sad?’, I wonder—did Britney really want to post that image that says ‘Sassy since birth’?

Fandom can be used to mediate a sense of connection and belonging, to see oneself reflected on television or to imply that all that glitters is not gold. At this point in my life, fandom has become about processing my grief, returning to something that comforted me when I was much younger.

I had this realisation during the livestream of my Uncle’s funeral. Given the current restrictions, not many of us could be there in person, so our grief had to be felt and shared via a screen. At the end of the livestream, they took the casket outside, but the camera remained fixed on the room where the service had been held. In the room there was a square window that looked out onto a mossy rock wall. It was raining that day, and the plant growth moved wet and heavy in the wind. Shadows of the people in attendance, as they gathered outside, played across the wall.

I watched this empty room until the video ended, and in this moment, I thought back to the episode ‘Forever’, which aired after ‘The Body’. Buffy’s ex-boyfriend, the vampire, comes to her side after the funeral of her mother. As they sit together in the cemetery, she notices that the sun is starting to rise. He says that he can stay in town for as long as she likes.

Buffy responds, ‘How’s forever? Does forever work for you?’