Tell me how to rescue our intimacy
from this barrage of symbols
this need to create a meaning out of ‘i’
that totally consumes
any consummation of a ‘we’
Lyra Pramuk, Elevate, (2017)

The spectre of a soft dick haunts the white cube.

A little over a year ago, my friends from Salón Silicón, an artist-run space located inside a converted beauty salon in Mexico City, invited me to curate a fleeting one-week exhibition. Since December 2017, Olga Gutiérrez, Laos Salazar and Romeo Gómez López have managed this artist-run space in the Escandón neighbourhood, showcasing the artistic practices of feminist and sex-gender dissidents. Their exhibition program is a response to the normative power of patriarchal culture that permeates the art world, and Mexican society in general. In Mexico, despite the multiple trans/feminist movements lighting bonfires in anger—with the flames following political traces like a trail of gasoline, attempting to burn down the sociocultural framework that naturalises machista violence—little community work has been done in the area of interpersonal relationships. As cis men, maricas and straight, we need to step closer to the heat, so that the flames may transmute and consume our bodies, and show us premonitions.1

From the ashes, we may construct a new world where we are no longer accomplices to a (cis)heterosexual regime2 and its necropolitical dystopia.3

In response to Salón Silicón’s invitation, and considering this lack of focus on interpersonal relationships, as well as the need for cis men to work together, I began to envision an exhibition: a space where fleeting moments could encourage deviations from prescribed social relations, with the intention of recognising other ways of being. 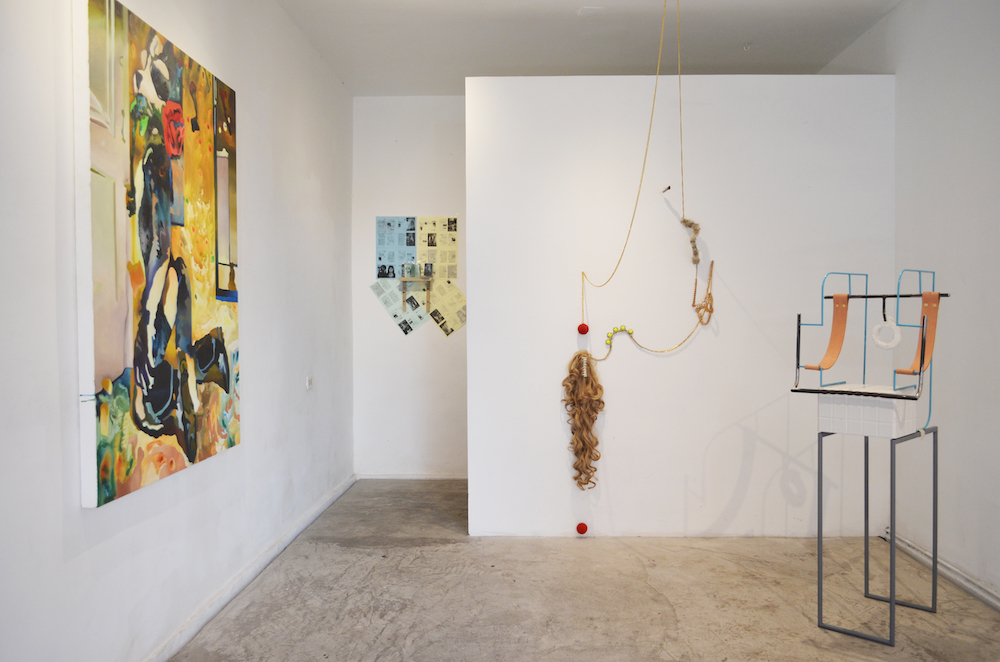 Here’s a room filled with men.
Some maricas, other straight;
I am sure we have all once doubted our desires
and identities at some point.
Each artwork is a delicate extension of their bodies.
Together, it seems to be the same as always:
another phallocentric exhibition,
men that can do it all,
tell it all and want it all.
Nonetheless,
this exhibition bets on the lethargy of erotic tension between bodies
to stimulate a poetic sensibility that allows us to recognise
how, among cis men, we affect each other through our presence.
In other words,
how a cis man participates in the masculine
without collapsing because he is fragile.

Stavros Stavrides tells us physical spaces offer the possibility to imagine and project new worlds. In the white cube, we populate these spaces with objects and subjects, where social interactions create shared realities. Stavrides points out the need to (re)create spaces by destroying them, a perspective that aligns with the decolonial call that total collapse is the only solution to reinventing our colonised selves. By destroying these spaces and performing new social relations, we become the rightful authors of our own stories, reclaiming the power to dismantle the (cis)heterosexual regime.

This (re)creation of space is important because I live in a society that normalises trans/femicides, where the killing rate is ten women a day. These crimes go without punishment. It is also the second country in Latin America with the highest trans/femicides. The (cis)heterosexual regime allows this degree of violence because it has formed spaces of sociability along a machista axis, one that conditions women and trans* people to live under threat, fear, anguish and discomfort—a precariousness eventually leading to death. This axis requires a patriarchal pact of silence, re-victimisation, and naturalisation that, as cis men, we have the responsibility to betray, in order to enable habitable spaces for women and trans* people. 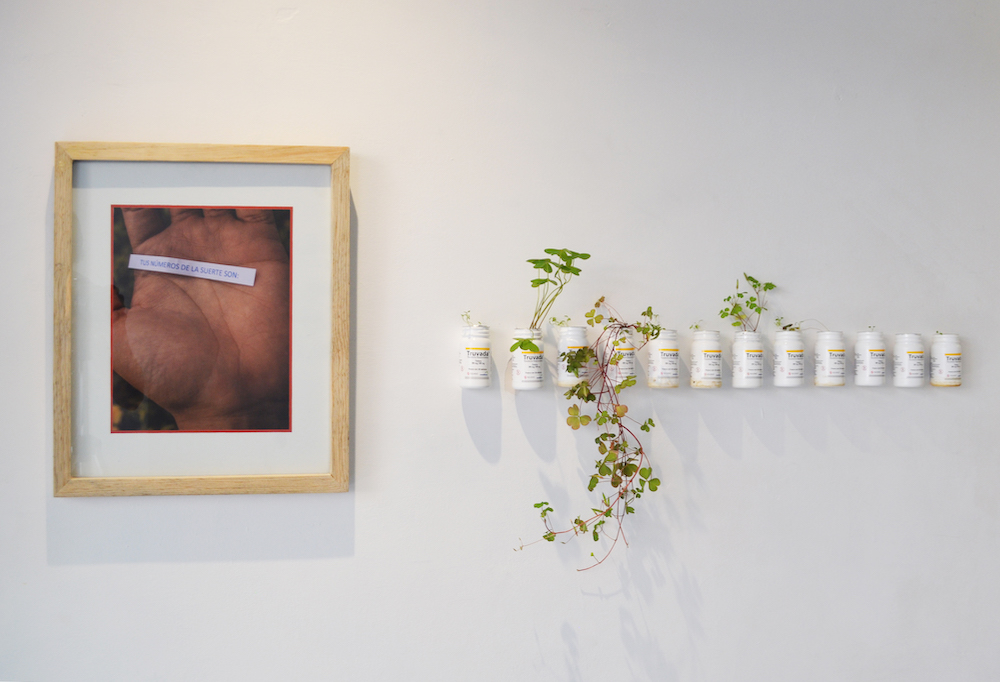 In this context, exhibition spaces can become places to exercise contention, and support collective processes for the sensible reconfiguration between men. What are the socio cultural possibilities to reinvent ourselves in exhibitions? The events of installation, and the exhibition opening in particular, are spaces where there is a confluence of people.

The challenge is inaugurating other sensibilities—of vulnerability, reciprocity, co-responsibility—across fleeting moments of recognition and listening. This encourages the imminent transformation, which then creates new social relations and fulfils the need to (re)create space.

I called the exhibition Soft Dick Moments, starting from the possibility of facilitating an inconceivable alliance between maricas and (hetero)cis men, in a context where free market capitalism creates uniform identities—an essentialism that cancels other ways of being and the potential to (de)form politics.

Unlike this uniform monolith, dicks come in many shapes, hanging flaccid and soft. This sense of radical tenderness, (for the soft dick is an image of masculine vulnerability), obeys an ethic of affection derived from Dani d’Emilia and Daniel B. Chávez’s Manifesto Vivo (2015), which is a poetic ‘how-to’ of disruption through vulnerability and shared intimacies. Radical tenderness is a dislocation of fragility, and it reveals joyful passions as vital conditions for organised antagonism. The soft dick in this exhibition becomes a poetic image that enables an imagination of alliances between maricas and hetero(cis)men, who recognise a fugitive desire to be otherwise in the world beyond hegemonic masculinity. 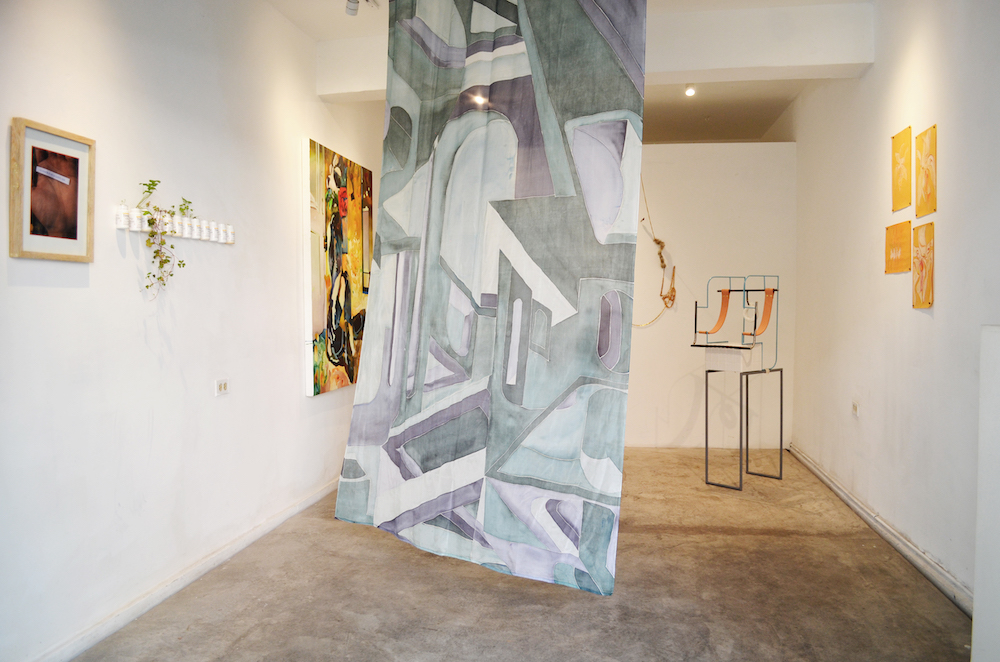 The eroticism of their artistic body makes them vulnerable,
making it possible to open conversations about desire,
sexuality and identity,
a triad intimately linked to our complicity
with the violence of this heterosexual regime.

To curate this show, I positioned myself as a marica, a person whose desire is abject to the heterosexual regime. This follows Nicolás Cuello, who declares:

‘To make of my sexual identity an expression that articulates my gender is a way of accounting for the marginal positioning around the sexual mandate associated with the gendered masculine identity assigned to me. This names a state of conflict and strategic disaffiliation with a system of intelligibility and expectation to which I do not want, cannot, and do not wish to respond.’ 4

By occupying this position, I put into practice the knowledge cultivated through my bodily experience. I open up a space of contradiction through an ethic of queer disobedience, transmuting the violence and pleasure gathered in my sexual desire, purposely failing to perform the sex-political scripts that seek to narrate my biological body.

In the tremendously machista society of Mexico, this allows me to take care of the patriarchal responsibility that I share with others, who were assigned the masculine gender at birth. To break from the binary, movement is needed. I am because we are together.

I invited seven artist friends, four maricas (like me) and three (hetero)cis men, asking myself: How do we affect each other through our presence? Can the tensions that historically relate us mobilise us against the trans/femicidal emergency that we inhabit? How do we denaturalise the cultural resistance to cultivate sensitive languages between cis men? Can we instigate a radical and collective positioning within this patriarchal culture, where the masculine hegemonic gender asphyxiates us, with its violence and toxicity? 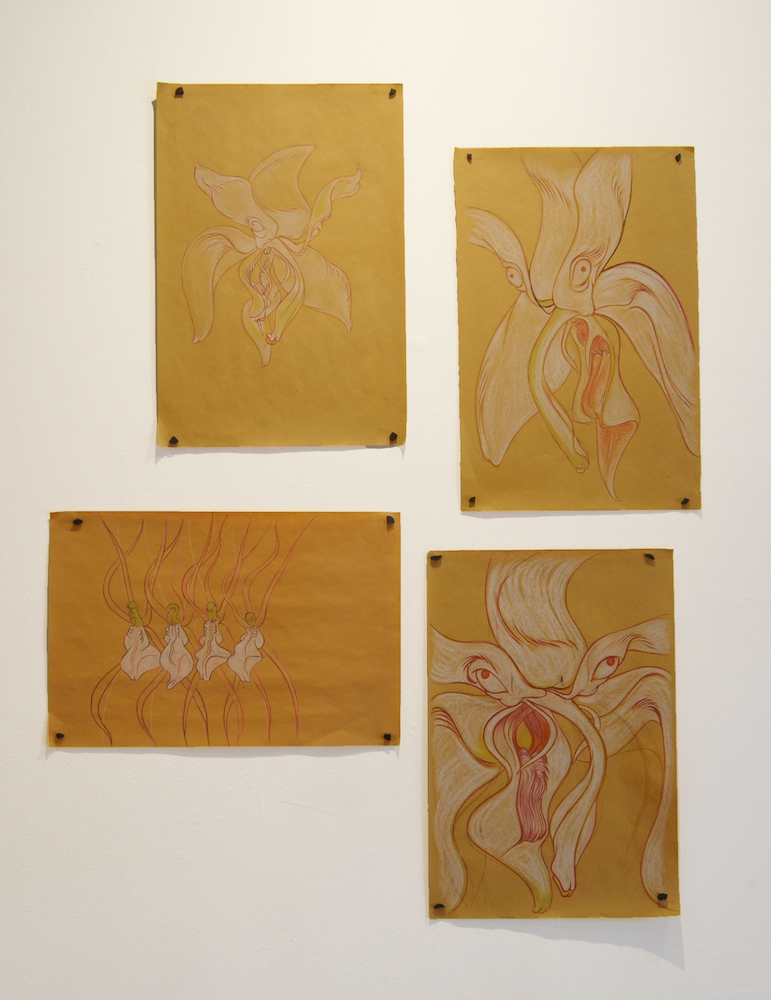 If we pay close attention,
through caressing,
the curator of this exhibition
generates another type of encounter between men:
compressing the porosity of the cement,
Yeni’s body rests on the ground,
which spreads out
and becomes a wall tickled by Ivan’s flirtatious shadows.
Gabriel, with his vaporous movements,
is a silk filter that steams the latex suit covering Lucas,
who is seduced by the gestures
Javier makes with his petals,
an attempt to translate Beto’s tenuous dance
sprouting through the mud.
Embracing the group,
Isaac recites fantasies of romantic
and tender intimacy.

I recognise artworks as a delicate extension of the artists’ bodies, without separability, in reciprocity to the world, and without containing themselves only to the exhibition space. From the marica experience, the bodies of Beto Pérez, Lucas Lugarinho, Isaac Olvera and Yeni Mao are present through the soft torpor of torsions and marks that come from the palpitating experience of sexual desire. Each work becomes ‘a virtual agent of the emotional-political reorganisation of the emergence of the possible, the concentration of the strange, and the sustainability of the alternative.’5 Framed by this exhibition, from the formal to the abstract, the work of Javier Barrios, Gabriel Rosas Alemán and Iván Krassoievitch trace a variety of visuals that embrace ambiguity and the dissolution of masculine language.

What, then, can caressing do?

Caressing is recognising each other in reciprocity. We gather in the same space to know each other, as possible accomplices. Letting our identities guide us is a trap that eradicates the singularity of our experiences, and inhibits new alliances. Identity politics under neoliberalism, following Asad Haider:

‘[…] is an individualist method. It is based on the individual’s demand for recognition, and it takes that individual’s identity as its starting point. It takes this identity for granted and suppresses the fact that all identities are socially constructed. And, because all of us necessarily have an identity that is different from everyone else’s, it undermines the possibility of collective self-organization. The framework of identity reduces politics to who you are as an individual, and to gaining recognition as an individual, rather than your membership in a collectivity and the collective struggle against an oppressive social structure.’6

We must remember that we come together with friendship, which allows us to create new tools and knowledge. The white cube is a space where the curator can mobilise bonds with radical tenderness, and encourage reinvention.

Faced with the professionalisation of artistic and curatorial practice, understanding the white cube as a space of intimacy between colleagues and friends can allow for pedagogies that bring us closer through trust and openness.

A closeness where it is not necessary to separate ‘the aesthetic’ from ‘the political.’ In this way, together, we can betray the patriarchal pact that makes us accomplices of the (cis)heterosexual regime—a regime that organises the territory occupied by the necropolitics of the Mexican state, which oscillates between declaring a war against narcos and enacting trans/femicides, amidst other acts of terror. We inhabit the imagination of the heterosexual regime, which normalises harassment, dispossession, exploitation, and violence. Soft Dick Moments is a response to this state of affairs, as it counters the segregation of cis male identities, encouraged by machismo. We need to organise ourselves before we lose charge of our social bodies. We must abandon the oppressive imagination of the State. Collectively repairing our own relation with identity becomes an act of rebellion.