You know that feeling, when you’re falling asleep, but not quite there yet. You see things, but they’re not quite dreams, not yet. Your sense of your body’s boundaries starts to flicker. You’re big, you’re small, one limb stretches like blutac then it snaps back. What a curious feeling, as Alice would say. I must be shutting up like a telescope. In. Out. On. Off. Just for a moment. And then you’re gone.

Gregory Hodge’s immense new paintings turn you into Alice, too. They shift scale on you. They leap. They leave you wondering where and how you stand. In ‘The Jump’ (2019), a series of double-sided panels hang from the ceiling, one in front of the other like they’re jostling to get to you. They form a crowd of colourful brushstrokes and other forms: a dun shape like a pottery vessel; a blue, cartoon-like arm. I watch a man walk up behind and give one of the panels a push. He grins, then side-eyes the gallery and oh-so-casually steps away. In his defence, it looks like it wants to move.

Hodge’s brushstrokes bound all over the place, each with its own speed and rhythm and hue. Some are on a grand Alice-scale, made with extra wide handmade brushes. Others are a little more zingy and human-sized. Because this is what we look for.

So many strands of abstraction encourage us to see ourselves in the artist’s marks: Cy Twombly’s snaps of the wrist; Judith Wright’s balletic arcs. We read mood and energy by placing ourselves into these marks and measuring them against our own bodies, anxieties, moments of grace.

Hodge’s giant brushstrokes confound any sense of a consistent human scale. The two suspended paintings, ‘The Jump’ and ‘Fictions’ (2019)—which also gives the exhibition its name—are over three metres tall. Our understanding of their dimensions, of being physical objects in space, is also disrupted. There are shadows here and there, painted ones, in addition to the real shadows cast by the hanging panels. These subtle trompe l’oeils are like lobbed grenades. They wait for you. It’s only when you’re right in front of the paintings, feeling like Alice shrunk down to a mite, that you figure out why the works have such a physics-defying presence. 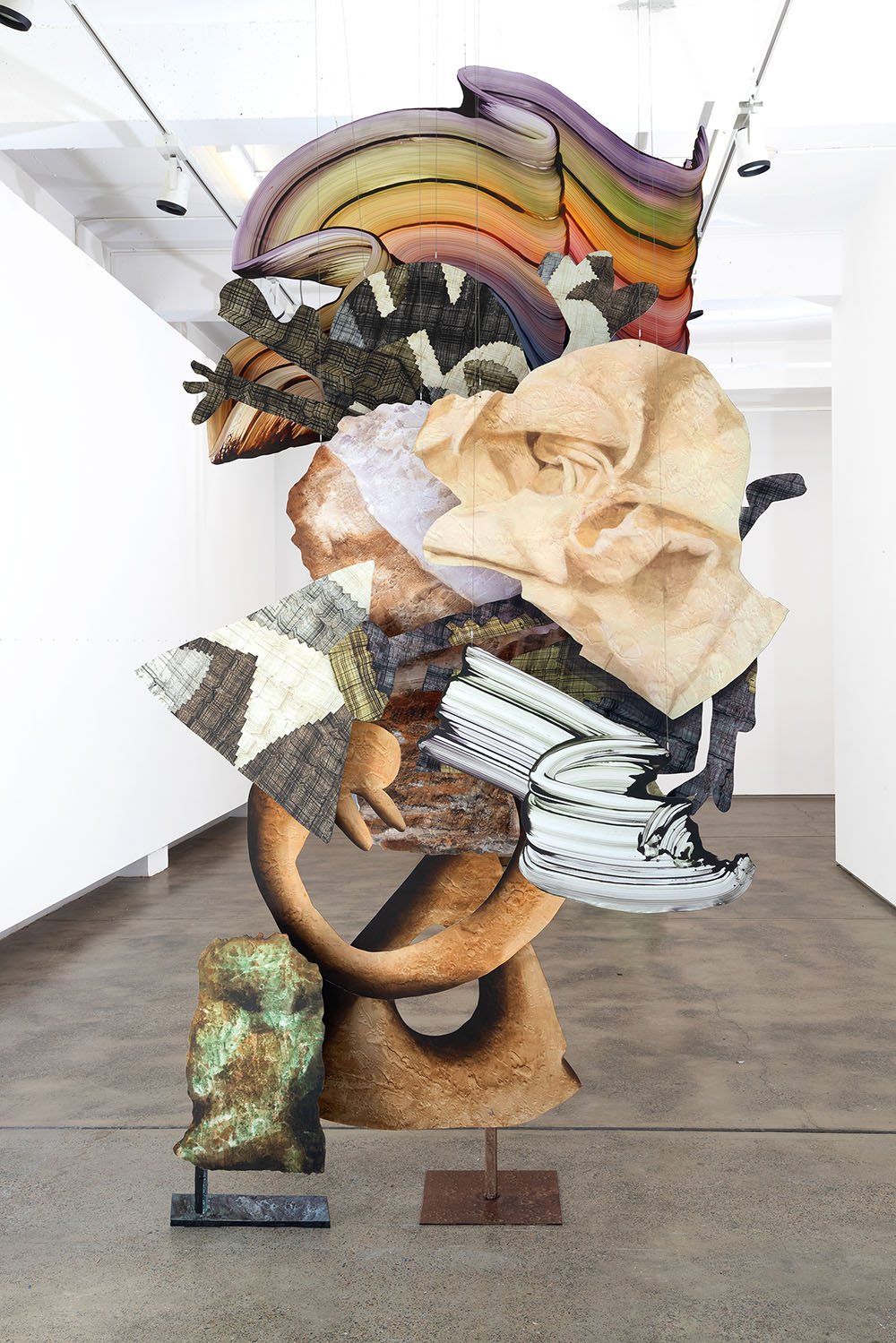 These works also have metal plinths beneath them. Even from a distance, they’re too small to be functioning supports. (In any case, you can see the wires from the ceiling, right there.) Some of them have been painted with tiny crater rings like a NASA photograph of the moon. The plinths turn up again in ‘Breakaway’ (2019) and ‘Untitled’ (2019). Both of these works are acrylics on canvas—flat paintings—and, even in two dimensions, the plinths struggle to hold the colour-in-motion of Hodge’s brushstrokes. It’s almost comedic, the hubris of it. The plinths start to feel more like anchors, like habits we can’t break even when we know they no longer serve us.

Alongside the plinths, ‘Breakaway’ and ‘Untitled’ have also been given neat, gradient borders. The borders shift from light to dark, offset to inset, and the paintings tilt with them. It’s another skew, another way of unsettling expectations. All of the works in Fictions play with frames like this in some way. In ‘Figures 1-4’ (2019), Hodge places traditionally framed paintings on top of fields of swirling colour. These paintings appear to be of figures but each one is made up of tiny abstractions, pieced together like collage. ‘Figure 4’ (2019) looks like a head but it has been given shadows that make it look concave, like an absence rather than a presence. The jump between these figure paintings and the sprawling, unframed brushstrokes behind them is abrupt. The works begin to vault between abstraction and figuration, foreground and background, light and dark. Tropes are called out. Expectations are overturned.

One hypothesis about the hypnagogic state is that, when we enter sleep, ‘the brain steadily dismantles the models and concepts we use to interpret the world, leading to moments of experience unconstrained by our usual mental filters.’ Or frames. Or cues. Because isn’t that what Hodge is doing? The works in Fictions play with our understanding of beginnings and endings, of the supports we look for, and the markers we rely on to place ourselves in relation to an artwork. They use frames, borders, plinths, shadows, trompe l’oeils, wires like puppet strings and flips of perspective. They nest, like the ever-beginning stories in Italo Calvino’s If on a winter’s night a traveller (1979).

Are you disappointed? Calvino asks with a wink, early in the piece. Let’s see. Perhaps at first you feel a bit lost…But then you go on and you realise that the book is readable nevertheless, independently of what you expected of the author, it’s the book in itself that arouses your curiosity; in fact, on sober reflection, you prefer it this way, confronting something and not quite knowing yet what it is. 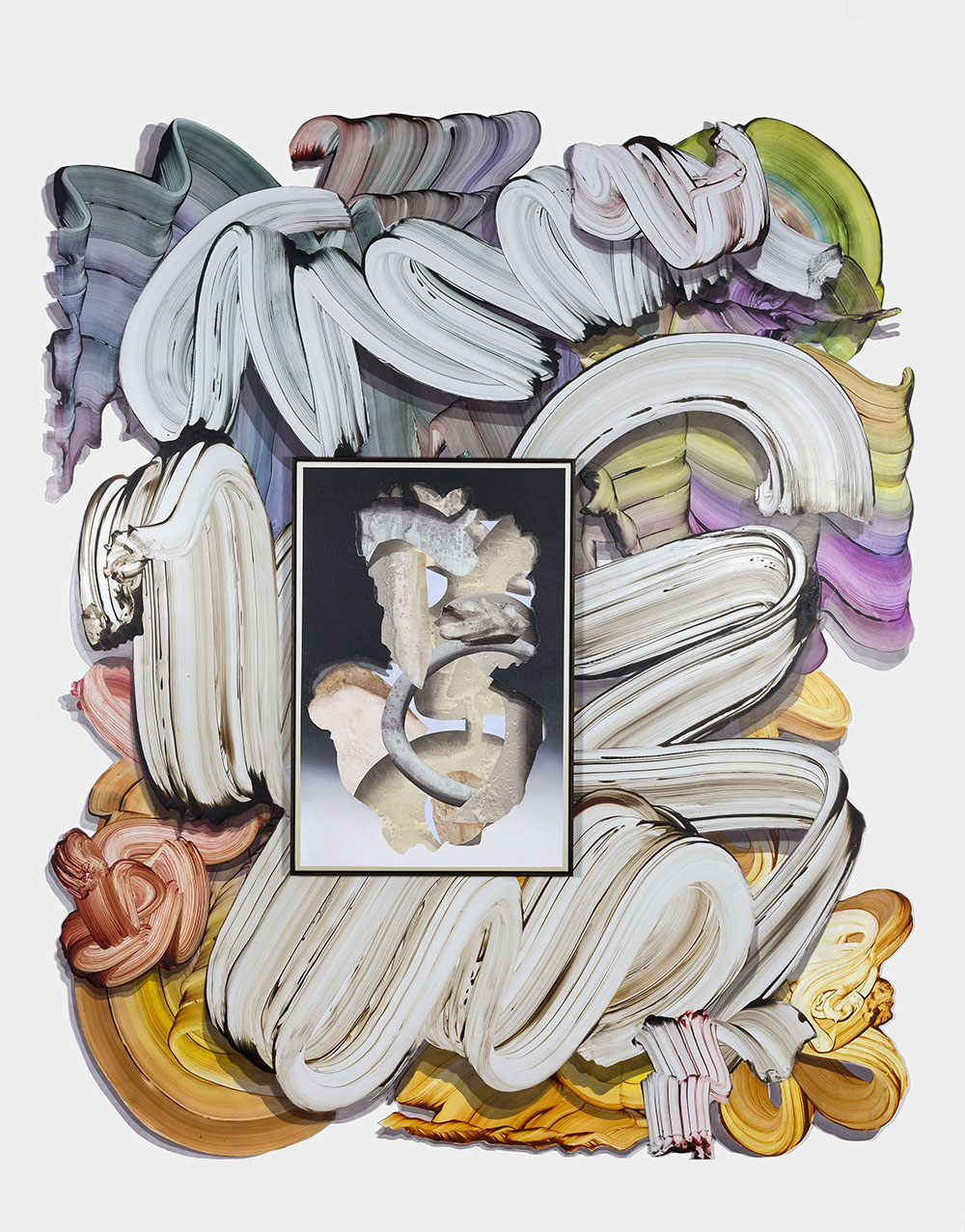 Hodge’s works are disorienting but, like Alice after her eat-me-drink-me adventures, we adjust and go with it. One reason is the simple pleasure of these works. They have a bounce and energy that draws you in, like hearing a good friend’s laugh. Another might be the references tucked between the brushstrokes. Some works relate expressly to the body, like the ‘Figures’ series and the suspended paintings with their loose arms—it’s not so impossible to find ourselves after all. Others, in detailing the surface of the moon, suggest a grander, more cosmic scale.

Most disarmingly, there are also scraps and swatches of painted textiles. ‘Fictions’ includes a panel like a scrunched-up blanket and another with patterns like an ikat rug. Hodge could be pulling the rug out from under us—or rather, from under the traditions of Western painting. But these domestic textures also remind us of our comfort zones: the feeling of pulling off our shoes after a long day and curling our toes in the rug or—better yet—pulling up the covers and settling into bed.