The difference between light and truth:

Photography captures light and shadow. The camera captures what’s there in front of it, so, for a time, photography was near synonymous with truth.

Nicholas Aloisio-Shearer’s black and white photography tears apart this assumption with both clinical precision and grotesque abandon. His portraits and still lifes appear to show traditional subject matter, but reveal themselves to be computer-generated models of plants, weapons and faces replicated from popular fantasy role playing video games (RPGs).1

Using open-source software to rip these subjects’ code directly from their video games, Aloisio-Shearer reconstructs the models outside of their game and photographs them straight from the screen with an analogue camera. It’s the organic materiality of film that enhances the clean composition and dramatic lighting of each work. Although the subjects are digital and timeless, they are also suspended in a perpetual state of decay, screaming out to be returned to pixels alone.

These photographs, despite their materiality and banal subject-matter, do not show reality but instead a shadowy metamorphosis of a reflection of the world. Fitting, as computer-led modelling, scanning, reconstructing, reproducing and reducing pave the way for a future of image-making which has next to nothing to do with the lens.2

The smooth polygons of the digital illusion, combined with the perceived ‘authenticity’ of light and shadow afforded by the analogue camera, means that each work opens a window between truth and fantasy. 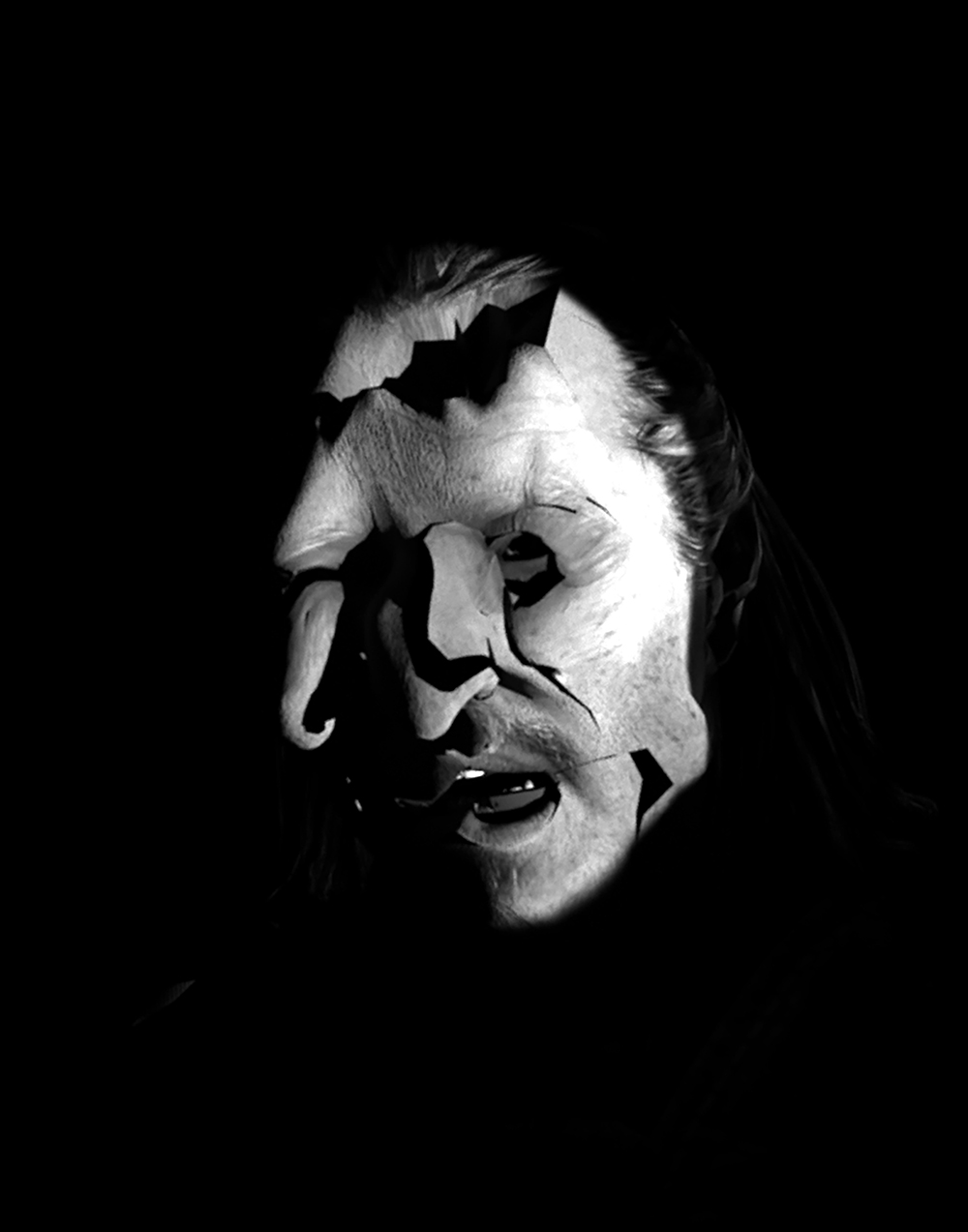 The difference between reality and nothingness:

Rococo bouquets of hand-tinted blue roses, ancient oversized weapons and distorted character faces have been transposed from reality to RPGs, to 3D software, and now back to reality. In many cases, Aloisio-Shearer’s deliberate modification of the textures is clear—from the icy root of ‘Awakening’ (2018) to the metallic and melting skin in ‘Tell Me’ (2018).

The surface of each object has been built up with minute detail so that, despite their strange appearance, every blade, petal and haunted stare is as convincing as possible when the light hits. But this kind of rendering only deals with the surfaces of things—underneath the textured polygons is pure nothingness.

It’s the flat rectangular hair cards, moulded noses, and gaping empty black mouths, that reveal these subjects as mere shells. There’s an element of the uncanny to portraits like ‘What Lies Within’ (2018), ‘Creeping Shadows’ (2018) and ‘Come With Me’ (2018), where this void-wrapped-in-fake-skin evokes the facial prostheses from World War I. Tracing the gaps in the folded grafts of paper-thin skin, or staring at vacant space where there should be eyes, feels like watching a horror movie.3

The difference between time and infinity:

Aloisio-Shearer consciously captures both the split-second and the infinite in his photography. Characters are photographed sighing and laughing and screaming, as if the viewer just stumbled upon a small moment of human action. In reality, the character models are deliberately posed and essentially frozen in a file: removed from their pathfinding and dialogue options, and captured in a single empty rendering plane.

The act of photographing them in this environment reduces them to a fraction of their complexity, yet simultaneously elevates them to another status entirely. The value of an object, and its worthiness to a collection, has historically been found in its ‘authenticity’ and ‘originality’.4 As analogue subjects, these models are now imbued with such legitimacy and realness, which moves them beyond the value initially ascribed through gameplay and fandom.

As Aloisio-Shearer reduces their infinite bright worlds to a single black and white frame, he also allows them to live in infinite new ways outside of the digital. 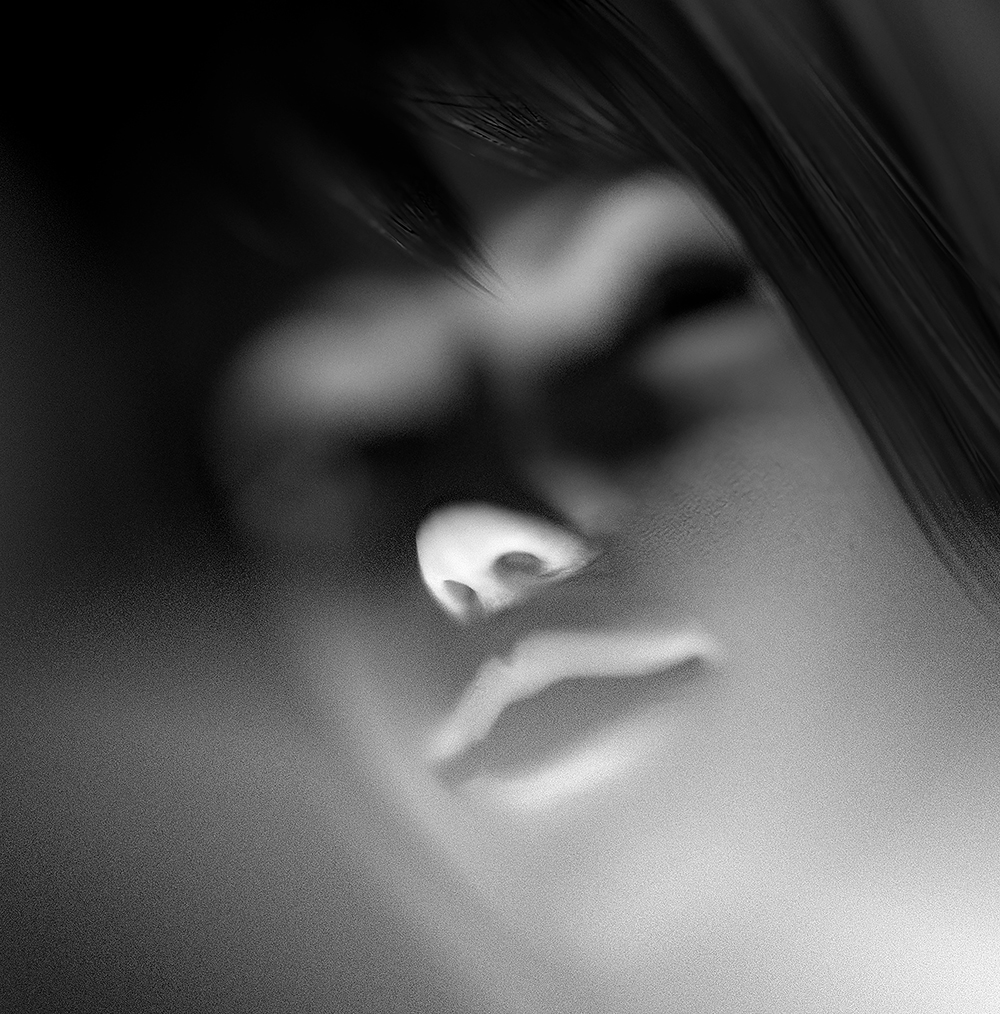 The difference between creation and decay:

Fandoms can divorce a beloved character from their original reality through fanfic, drawings, modding and more. These acts birth an infinite number of homunculus reproductions, which Aloisio-Shearer works into and subverts by making his reproductions analogue. His photography doesn’t limit these characters to a single frame, but transposes their entire existence into a new materiality.

While the single rose in ‘Flowers Blooming’ (2018) may never wilt in-game, the physical artwork remains in transition—moving through space in the real world. In using well-established photographic genres, Aloisio-Shearer has nonetheless managed to capture images unlike anything before. And that’s because his subjects are not of this world at all.

These completely hybrid moments defy our burgeoning new systems of classifying images. The subjects exude an inescapable human-ness through composition and expression, yet remain the stark misshapen product of a modern Prometheus—working with pixels instead of clay.