‘I’m always aware that I was born here the moment I open my mouth’, writes Jason Phu in his latest installation The fruit was sweeter then. The fish were more plentiful. (2018). Showing at Alaska Projects and commissioned by ANTIDOTE, the installation is framed as the sister show to a larger exhibition entitled The Trace (on view at Wellington St Projects, and curated by Grace Partridge & James Nguyen). In filling the gallery space with a series of typed autobiographical recollections, Phu presents a poignant reflection on the experience of diaspora as a Chinese-Australian artist. It is through sharing this personal history that Phu confirms ANTIDOTE’s curatorial premise: traces are ‘a scar on our collective subconscious’—they are signs of the past operating within the present.

I am the child of Korean immigrants. And when I observe Phu’s work, my thoughts begin to intrude—I am reminded of Korea and its spectral shores. Korea exists as an imaginary in my mind, as merely a vestige of presence.

Phu’s typed pages are haphazardly tacked to two of the gallery walls, fluttering in the breeze of a nearby fan. The series on the right hand wall recalls a visit to Bunnings with Phu’s mother in order to buy Buddha heads. Phu ruminates on these objects as symbols of identity and cultural authenticity, observing that ‘[The Buddha heads] are almost too perfectly full of the confusing diversity you find in the contemporary oriental.’ Candid and straight forward, the text on the wall reads as a stream of consciousness, providing intimate access to Phu’s mind, his memories, and by extension, the construction of his identity.

I finally arrive in Seoul and I am inundated with fleeting images: catching dragonflies, holding my omma’s hand and eating pears. But these are only screenshots disintegrating from some bright light: it is the unsettling of a certain uncertainty.

An old photograph of a young Phu and his mother has been tacked to the top of the printed pages. With its soft lighting, it seems to possess the rosy gold nostalgia of ostensibly halcyon days.

I am five in Incheon. My grandmother takes me to a temple at 5am. There, she kotows on a bamboo mat. I watch the monks, their robes the colour of Korean pear.

I am fifteen in Sydney. My school friend has a Buddha sculpture in her rose garden and she jokingly tells me I look like it. I turn away from it, forgetting, chewing my green pear.

Phu’s written text is accompanied by a number of video works, which play out across four screens on the back wall. They appear to be filmed on an iPhone, and like the written text, are raw and unedited. The left two screens depict Phu and his father; the right, Phu and his mother. Together, they create a palimpsest of language, as Mandarin rolls forward from the wall and envelopes the viewer. (The loss of the ‘mother tongue’ is an oft-cited manifestation of diaspora—the limits of language limiting the connection to ancestry and immersion in culture.) 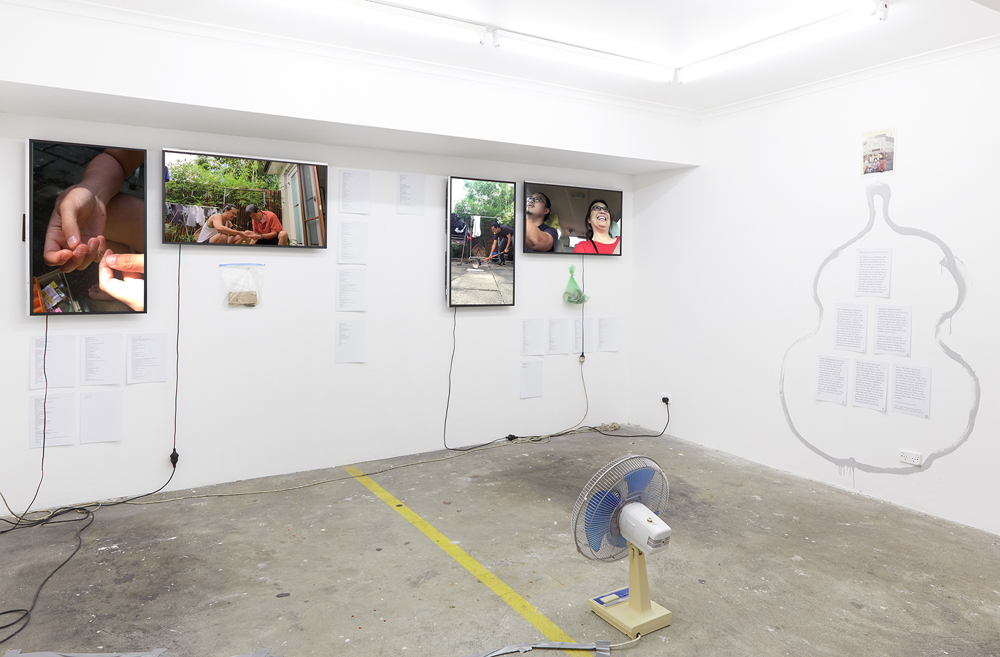 I sit with my omma conversing in slow, clumsy Korean, sharing slices of bitter Korean pear.

In one video, Phu destroys a purchased Buddha head with a hammer. The smashed remnants of the Buddha head are collected in a green plastic bag and nailed to the wall. In another, Phu sits with his father as he prepares hooks and sinkers for fishing. These same fishing hooks and lines also appear in a ziploc bag, nailed to the wall under their respective screens. In materialising what is on the screen, these objects become historical artefacts, re-presented as relics of the events in the videos. Could this literal re-piecing of these objects be mimetic of the process of the formation of diaspora? The construction of diasporic identities is a process that does seem ad hoc and eclectic—elements are adopted from ‘here’, from ‘there’, from personal experiences that refuse to be categorised.

Although Phu’s work does rely on specific references to his familial heritage, he never verges on the didactic. He transcends the perils of essentialism (a peril which occurs too often to artists of colour), instead creating a work that is affecting in its exploration of the interplay between past and present. In contrast to the impersonal, sterile environment of Alaska Projects, Phu has transformed the room into a nest of memories, reminding us that a history is constructed from lived experience. 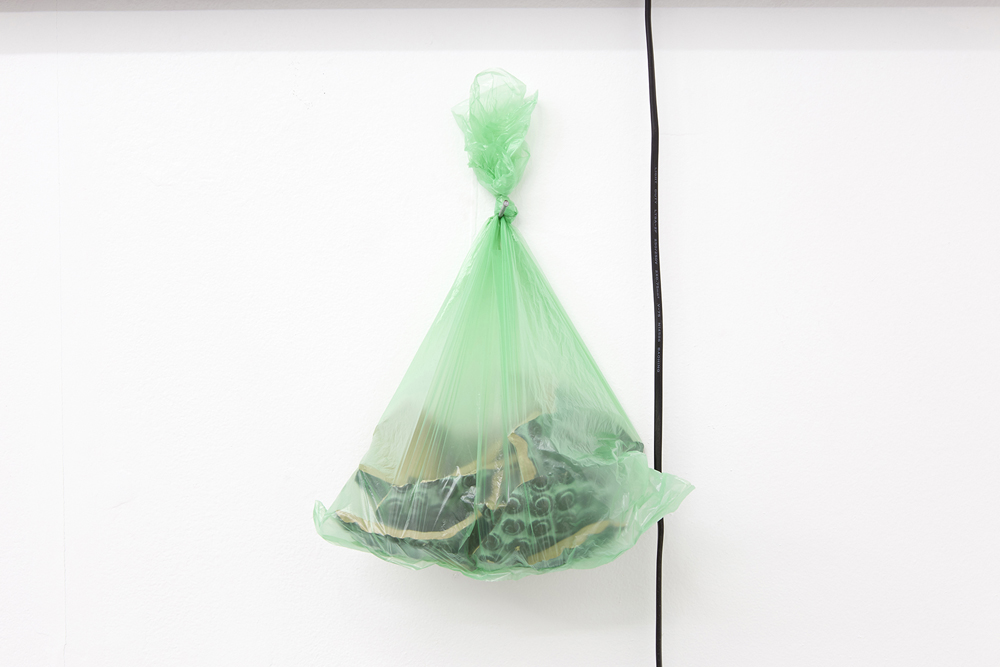 At the top of Namsan tower in Seoul, I can see the foreign home-city below me. The skyscrapers and apartments rise like ancestral tombs. The twinkling roads are a web of veins, of bloodlines. The Han River lies in the middle of the winking lights, a winding path of lineage. I step from forty degree Australian dryness to minus fifteen Korean snow, but that distance, that space, is what I know. I’m always aware that I was born both here and there the moment I open my mouth.

Phu is complicating the idea of cultural purity in his selection of materials, which means that, for me, ANTIDOTE’s curatorial statement that Phu is ‘caught between Australia and China’ can be pushed further. It occurs to me that Phu is working against such binary constructions—instead he is revealing an Asian-Australian identity that is wholly unique. As postcolonial theorist Homi Bhaba asserts, it is a cultural identity formed in a third space, an ‘in-between’ space that is created in the face of mass migration and globalisation.

After all, what does it mean to be ‘Asian’ in Australia? Does it become performative? Do we conform to the Western gaze? Do we play a part in Western misconception? What signifiers of ‘Asian’ are Asian-Australians exposed to and what signifiers are adopted? How do we construct our ever-shifting identities from these icons and materials?

Phu explores these slippages and interstices of intersecting cultures without shying away from cultural ambivalence.

It is a moment of simultaneously being both and neither. It is an alien intimacy.

I wonder if arts writing is imbued with the same ineffable palpability I experience when faced with the trauma of diaspora—the same frustration at the futility of attempting to articulate the inexplicable, to memorialise the trace, to eulogise a passing moment. It exists at the edifice of knowing, propelled by unknowing.