Coming in from the blistering heat, you find yourself beholding an Arcadian vision on the gallery walls. ‘Antidote’ (2005) is comprised of seven looping videos of a waterfall, and there’s comfort to be found in the playback of soft splashing and the air-con’s regulating flow. But looking across the video channels, a textural disharmony is revealed. Rhythms alternate between frames: there’s a tight shot of droplets hitting and rolling down a mossy rock in slow-motion, then an uncannily smooth take of the waterfall’s voluptuous flow in full, the surface burst of a splash abstracted by extreme close-up. The containment of the small room means that so many disjunctive perspectives collapse into one another—a colliding noise held into a chaotic whole.

Accident & Process is a survey exhibition of the conceptual artist Derek Kreckler, and showcases photography, video and installation spanning from the 1970’s to the present. Currently showing at the BRAG (Bathurst Regional Art Gallery), this iteration of the exhibition sits at the tail end of a touring program run by the Perth Institute of Contemporary Arts. Grouped together as a collection, Kreckler’s body of work inhabits and teases out a range of familiar touchstones of the Australian spatial imaginary.

In the main hall, the series of photographs titled ‘Big Wave Hunting’ (2011) presents the ocean in a variety of modes. In one image, intimations of ecological catastrophe append a hazy view of industrial architecture, the spume and smog connected in one pointillist continuum. Next, a close-up of the surf’s crash appears to be lenticular at first glance. Moving closer, each plane flattens into an impossibly dense coarseness. In another, the photographer himself is depicted with camera, withstanding a breaking wave in a playful reference to the rope-secured photography of Francis James Mortimer. Looming next to this series, the massive, room-sized ‘Littoral’ (2014) reproduces a concept of the sea and coastline as threshold. A looping video of ocean waves is projected onto a screen that has been cut into vertical ribbons—these ribbons are then routinely splayed apart from the breeze of a pedestal fan affixed behind it, rotating 360 degrees. The image filters through to the back wall, never held stable on any one surface, a formal equivalent to the porosity of its subject. 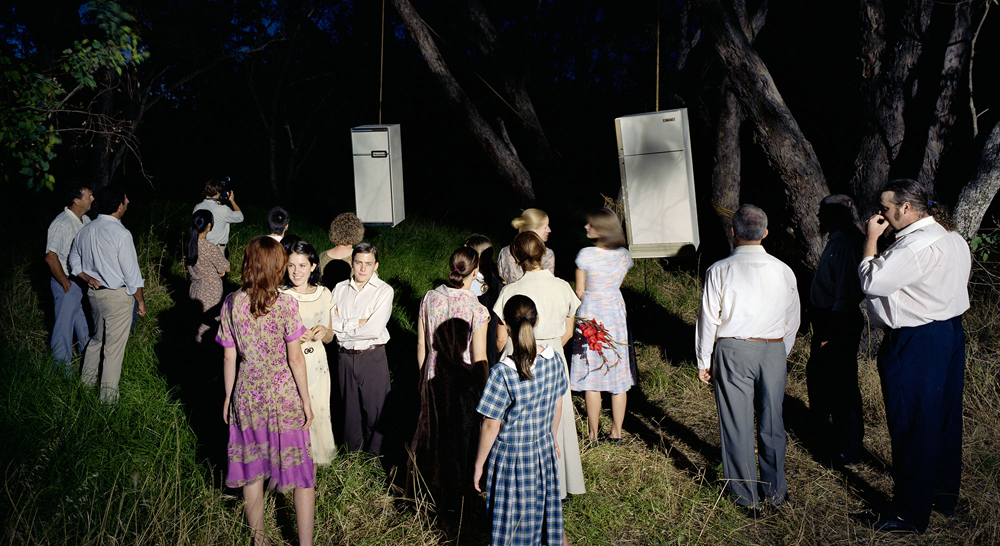 ‘White Goods 4’ (2004), a large photograph featured on the adjacent wall, demands to be examined. It’s an unsettling scene: people in their Sunday best congregated in a field at night, their backs to the camera, attending to a pair of refrigerators hanging from trees. The image is almost lost to overt commentary. As the curator’s note suggests, the photograph evokes loose connotations of both ‘the fifties’ and lynching in the United States. But contemplating this region alone, with the Bathurst War fought between the Wiradjuri and Britain, the Lambing Flat riots, the Cowra breakout… how is it that these berserk particulars have no idiom, no reservoir of images to be drawn on? Why is the subject broached, here, second-hand?

But this is a misguided line of enquiry. Look longer and the details redirect themselves to the viewer and back to the picture itself. Amid the immaculate staging there are two blurred heads, a candid movement caught still. A young man centre-left looks back at the photographer, through to the gallery spectators. Behind him, another man takes a snap of the hanging fridges, the photographic apparatus doubled. Self-awareness metastasises on thought. These recursive moves are beyond worn-out. And yet, in persisting with the piece, the photograph remains eerie: when trying to pinpoint its effects, you are drawn to the empty black space beyond the crowd and the consumer goods swaying in the trees. It’s an eeriness close to Mark Fisher’s formulation of an affect or ‘sense of alterity’ situated within common knowledge and convention, a case where ‘there is nothing present when there should be something.’ [1] 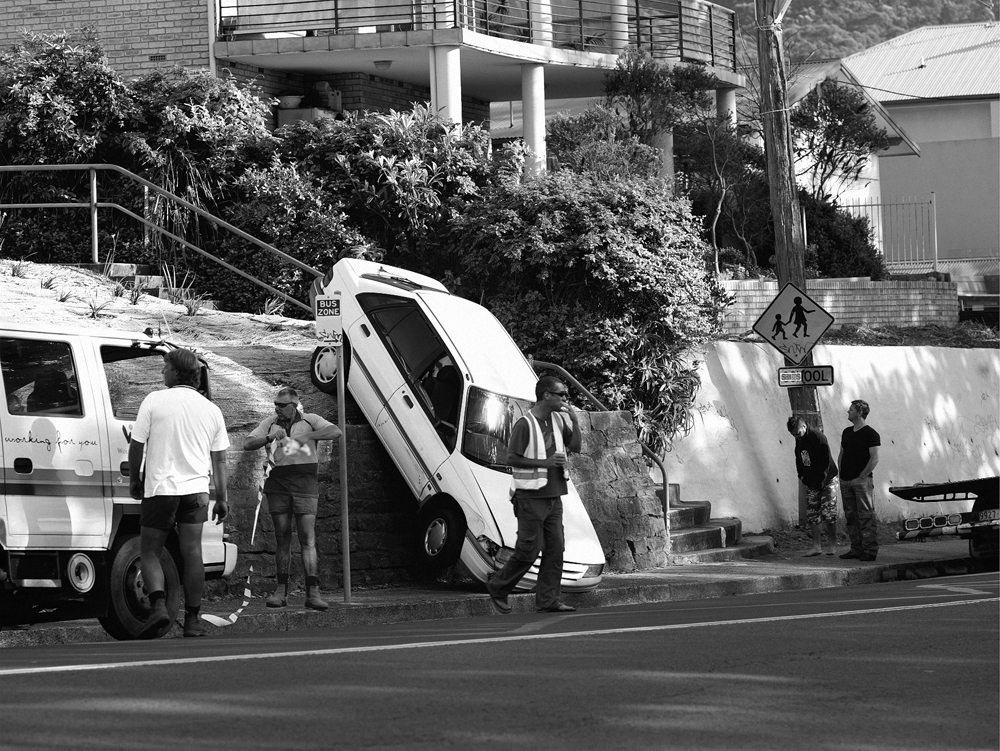 Around the corner, a video installation, ‘Blind Ned’ (1999), is a fine comic riff on the overfamiliarity of national iconography. It’s a single-frame shot of bushland; in black and white imitation of old film. Suddenly, Ned Kelly himself appears from the void and shuffles toward us, cane in hand. The short video is looped, (re)performing the exhausted figure’s afterlife in the form of endless iteration and reproducibility. Filmed on beta, transferred to digital, interchangeably aping the cinema of attractions and Vine video, it’s a cursed remediation. In the space between the viewer and the projection, a stuffed kangaroo also watches on.

At the last turn, the titular photograph series makes a fitting summation of the exhibition. A car rests nose first at the bottom of an incline while an emergency crew prepare the hazard tape. Its end flows in the wind, a classic index of the real, yet the car sits curiously unharmed—an accident without the proper trace of damage. It’s an uncanny effect deployed in each of the images: a tree branch fallen on a pedestrian splayed theatrically on a lawn, a waitress dropping glasses at an art gallery, the panic of lost control captured as definitively as the landscape paintings hanging in the background. Clearly staged, these photographs thematise the playfulness found throughout the exhibition, where the variously awkward, discomfiting and bizarre effects of formal disjunction are amplified. They make for an affirmative statement built on a career of experimentation: reassurance that accidents will happen if you plan and work for it.