A few weeks ago, my partner and I travelled to the Philippines—we took a Street View sojourn to my maternal grandparents’ former home in Manila. I remembered the street name, but not the house number, so I typed the name into the address field and clicked slowly along the street—pausing to point out every jeepney on bricks, every haunted house, every Jollibee delivery bike—until I found it.

The house is now an office, but the flat, gently-pitched roof, the pebblecrete balcony enfolding the top floor, and the big tree spilling over the top of the yellow stucco gate remain the same. For a moment, nostalgia distracted me from the fact that I will not see the house in person, nor step foot in the Philippines, any time soon. Earlier this year, days before we were due to fly to Manila for my grandma’s 92nd birthday, the country entered one of the world’s longest coronavirus-lockdowns.

Plenty of people who grow up in the diaspora know how homesickness for a place you’ve never actually called home adorns you like a birthmark: you can cover it up or forget about it, but it’ll never go away.

Filipino-Australian sisters Lauren and Kass Hernandez, known professionally as Crossing Threads®, understand this diaspora experience well. Their exhibition, as part of the Holding Patterns series at 4A Centre for Contemporary Asian Art, grapples with this—amongst other topics—with a stunning, startling sensitivity. Rather than creating self portraits in a quest to probe their cultural heritage and identities, the duo creates something else entirely: landscapes. 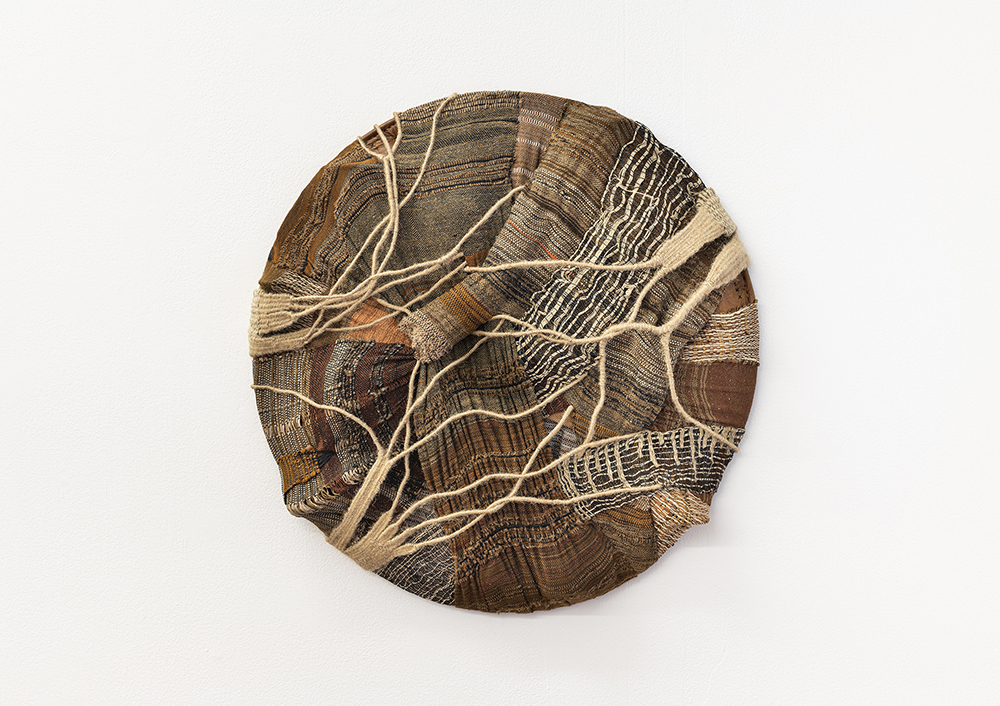 Crossing Threads®, UNDER MY SKIN (2020)
Handwoven by Lauren and Kass Hernandez
Image credit: Kai Wasikowski, courtesy of the artists

The San Juan River winds north westward through San Juan, the districts of Santa Mesa, Santa Ana and Mandaluyong, and Quezon City, the former capital of the Philippines. It slinks beneath the 8-lane traffic of Quezon Avenue Bridge, past THE CHOSEN FRIDGE FROZEN FOOD STORE, underneath the 10-lane traffic and light rail tracks of Epifanio de los Santos Ave, and alongside the Windgate Villas gated community. The River has a 1.0 star review from 1 Google review.

You can head to Santa Mesa and ponder the earth mover in the water immediately west of the San Juan Bridge. Then, drag left and click along Old Santa Mesa Street, where the streetscape is layered like peeling posted bills. Too narrow for Google’s car-mounted cameras, the many side streets suggest entire dense, vibrant universes that present themselves momentarily, before tapering into a vanishing point of pixels.

In satellite view, these impenetrable side streets and alleys organise themselves into a radial quasi-grid that fans outwards from the riverbank. The paths mapped by Google criss-cross in a translucent web, hovering above tin and iron rooftops that, rusted with age and the elements, appear as tiny, tonal rectangles of brown, maroon, and red. Butted up against one another, they create finely detailed planes of earthly colours veined by the grey and white of sidewalks, roads, and alleyways.

Similarly, in ‘UNDER MY SKIN’ (2020), Crossing Threads® overlay interwoven strips of earthen-hued jute, linen, silk, and other up-cycled materials with a web of mulberry tussah-wrapped wire. The sculpture is compact but dense, tightly coiled; its layers clamber over the top of one another, each fighting their way to the top. Rich in tone, finely textured, and rendered painstakingly by hand, it looks almost exactly like a city viewed from space.

There are more than 150 distinct languages in the Philippines, meaning there are many ways for Filipinos to say ‘brown’ in their native tongue, depending on where in the archipelago they come from. All three ways that I know in Tagalog—kayumanggi, morena, tsokolate—come to mind when standing in front of ‘UNDER MY SKIN’, and it’s no coincidence that the first two relate specifically to complexions. Crossing Threads® describes the work as a rejection of colourism in the Philippines and its diaspora, where brownness is at once ubiquitous and reviled. This paradox weighs particularly on the country’s women, more than half of whom allegedly use skin whitening creams.

By presenting brownness as a landscape to be traversed rather than a flat homogenous thing to be eliminated, ‘UNDER MY SKIN’ does more than just affirm that brown is beautiful. It positions it as central to the form and image of the Philippines—not just of the bodies that emerge from it, but of its cities, too. 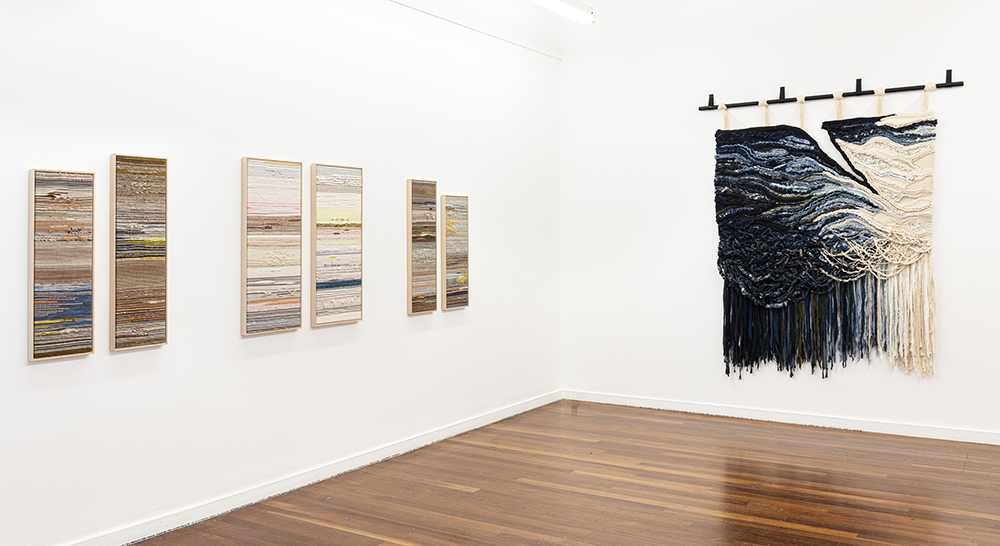 Nestled into the mountainside near Antipolo, Mystical Cave is a geological wonder where limestone stalagmites and stalactites cluster together in Gaudí-esque formations. The faithful visit to seek out likenesses of Jesus, the Virgin Mary, and friends amongst the rocks. As one visitor put it: Nakakatakot…[y]ung tipong kahit anong sigaw mo walang makakarinig sayo. (‘It’s scary…like no matter what you scream, no one will hear you.’)

You can pay a visit to Mystical Cave, then travel along Puting Bato (‘White Stone’) in either direction. Blanketed in trees and tufts of green, soft-looking native shrubs and grass, the roadside drops off and rises again, drops off and rises again with an unpredictable rhythm. This is the view of long car trips on family holidays, when the car—unencumbered by Manila’s notorious traffic—can go fast enough for the world outside the window to blur. At this speed, the grass, sky, and silhouetted mountains converge into stacked, contiguous streaks of pastel green, duck egg blue, and deep, purpley grey.

The same colours appear in ‘CONSOLATION’ (2020), in which a stria of bamboo, cotton, Merino wool, and other fibres, fill twin, narrow Tasmanian oak frames. A serene, solitary meditation meted out in row upon row of colour, Kass Hernandez wove this diptych on a SAORI loom, all while living through a pandemic-imposed isolation that forced her to work separately from her sister. In places, the subdued rows flare outward or twist into one another, as though they’re trying, at half effort, to escape the frame.

‘SEEK’ (2020) and ‘INWARD STATE’ (2020), the two works woven by Lauren Hernandez during this same period of separation, follow a similar form and visual vocabulary. But, if ‘CONSOLATION’ meditates on a gauzy daytime scene, these four panels trace a topography that is regular and regimented. In ‘SEEK’ and ‘INWARD STATE’, pastel hues are replaced by the deeper blues of flooded rice fields, the flat browns of bare hillsides, and the indigo of skies swollen before a storm. Thrumming with tightly strung energy, they provide a counterpoint to the mellow, meandering scene of ‘CONSOLATION’.

Hung together, the poetic observer might say the works suggest a bond between the sisters that, like string, stretched tight during separation but ultimately remained unbroken. To me, they look like the view from the same car window at different times: glimpses caught during a winding journey away from the city. 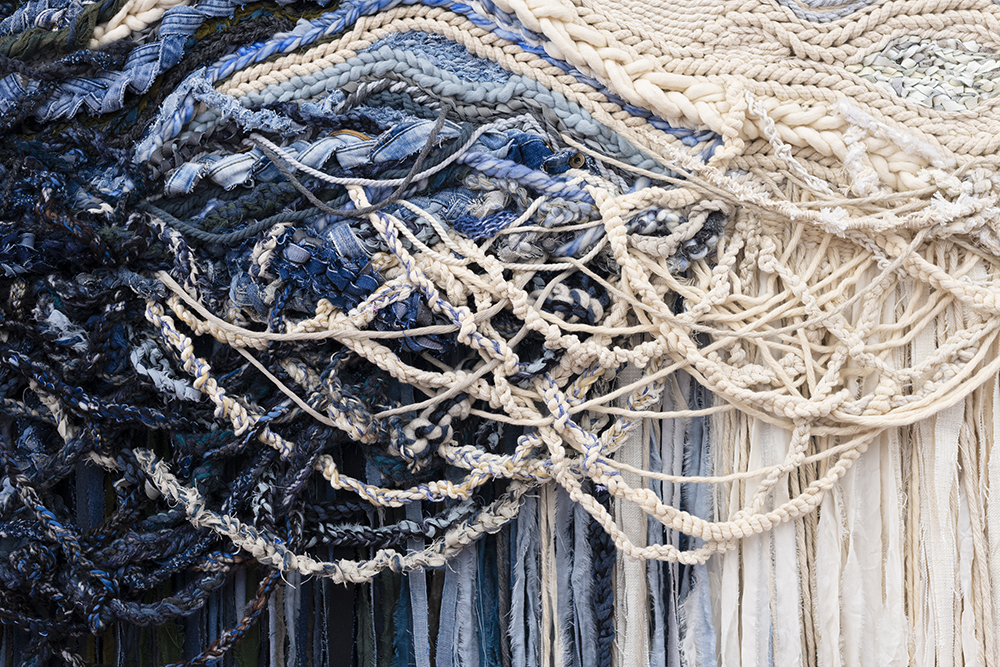 Siargao, renowned as the surfing capital of the Philippines, is shaped like a tear-drop. A coral reef lies just off the island’s eastern coast, where it acts as a picket fence between frothy tourist beaches and the Philippine Trench. At its deepest point, the trench descends 10,539 metres beneath sea level, making it the second deepest part of the ocean in the world.

No trip to the Philippines is complete without a visit to the sea. The so-called developing country is indisputably fully-developed as a beachside holiday destination, complete with shockingly white beaches and gemstone-blue waters. When foreigners aren’t picturing the Philippines as another unfortunate country with beggar children and sprawling slums, this is the image they conjure: a sun-dappled seaside paradise in which time moves slowly and sweetly.

It’s also the image evoked in ‘THE DIVIDE’ (2020), albeit as a tapestry rent in two. The idiosyncratic ‘inter-knot’ technique that Crossing Threads® has perfected is on full display in this work, which takes up the better part of a gallery wall and seeps downward like running water. The indigo of up-cycled jeans deepens and twists, crashing like waves and fading into the frothy white ridges.

The artists describe the work as a ‘dense seabed’ swirling with an ‘undercurrent of complex internalised feelings and emotions’, and this turbulence is apparent in its form, which deftly balances presence and absence. At the top of the tapestry, a series of warps are left exposed by weft cords pulled apart by an invisible current; at the bottom, loose threads hang heavy and dark like the unfathomable depths of the sea.

Yet the sea always calms itself in the end, and waves, more often than not, find their way back to shore. The triumph of ‘THE DIVIDE’—and indeed of the entire exhibition—is that it allows audiences to find their own way back. Crossing Threads® have created tapestries that are at once both deeply personal to the artists and channels for viewers to explore their own histories and feelings: to follow the thread and simply see where it goes.

Like maps laid out on a table or pulled up on a screen, their work transports you to wherever you want to go, whether it’s back to your childhood, your favourite holiday destination, or somewhere you’ve never even really been. The threads the Hernandez sisters pick up and weave together cross, separate, and unspool in a million joyous, unpredictable directions. And sometimes, where they lead to feels like home.