Flux and change prevail in Pieces of Spaces and Other Places, a collaborative exhibition project by Carla Cescon and Tina Havelock Stevens. The idea of fatalism is handled in different ways: Cescon through tarot and symbolism, and Havelock Stevens through forces of nature. The work of both artists is deeply personal, and about ageing parents. Cescon’s father is altered by memory loss, and Havelock Stevens lost her mother a year ago.

Culturally, we haven’t developed a very good language for grief, or what it does to us, or how we live with it. The euphemisms are as padded and made-up as a funeral director in her white pants suit.

As the sociologist Na’ama Carlin says, grief is an insular, individual experience in Australian society. ‘Generally, we treat grief as something one overcomes,’ she writes in her essay ‘Good Grief’ (2019). ‘We grieve, and then move on with our lives.’

Carlin is interested in the societal responses and rituals around death, and she argues that, in the patriarchal, post-Enlightenment Western world, emotion is devalued and grief—‘human fragility in its rawest form’—has come to be seen as an unwanted expression of sorrow and weakness.

There is a danger in talking about artists’ responses to the subject in terms of catharsis. That’s just how we’ve been keyed, after all. But in Pieces of Spaces and Other Spaces, neither Cescon or Havelock Stevens appear to be purging anything—although they are both thinking in materials, and recording something that is both ever-present in their lives and constantly shifting.

The exhibition spans two rooms at AIRspace Projects in Marrickville. The first room is given over to Cescon’s paintings, dominated by a large wall painting of starburst lines that radiate outwards (or, perhaps, collapse inwards). Below it is a pitchfork, which belonged to Cescon’s father. It is without doubt a beautiful object, with black, hand-wrought prongs and a worn, wooden handle. The painting and the pitchfork in this work—titled ‘Incidents, on the cards for FC’ (2020)—feel like a tarot card in two parts. Most telling is Cescon’s decision to exhibit the pitchfork standing straight up, without anyone to hold it. As a tool, it speaks of labour, history and purpose, and things left undone. 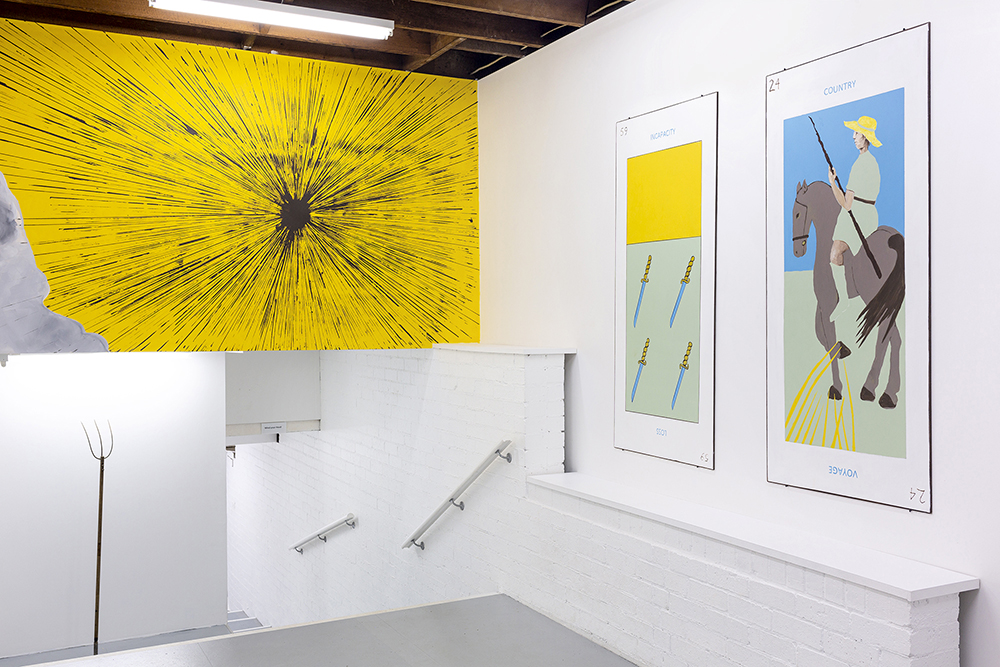 On either side of this piece, Cescon has placed paintings that speak directly to the design of tarot cards, with flat yellows and blues, black line work and deep white borders. One painting depicts a young man on a horse, with the text at the top and bottom reading ‘COUNTRY’ and ‘VOYAGE’. They refer obliquely to major moments in her father’s life and, by transforming these events into the language of tarot, Cescon has found a way to give his story a mythic weight without a mythic narrative structure.

Tarot is usually seen as an attempt to predict the future, but it might be better seen as a ritualised act of attention—a way of focusing thought onto different doubts and elements of life. Context informs how the cards are read and that context changes every time the cards are dealt. Meanings also accumulate in the patterns and repetitions over time. In Cescon’s work, there are references to tarot in the individual paintings and also in the way they are presented in the space. It feels like they could be picked up, like cards, at any moment and set down in some new configuration. Cescon’s paintings suggest the inconstancy of memory, and ask questions about change, relationships and the nature of identity.

There is a different sense of the elemental in Havelock Stevens’ work. Wind and turbulence run through many of the pieces, including the video ‘Future Windy Trees’ (2020). This particular work shows a slice of sky and the tops of gumtrees bending and swaying during a powerful windstorm. Havelock Steven’s recorded it just outside the family home, and has projected it here onto a silver-plated tea tray that once belonged to her grandmother. The silver tray gives the projection a luminous glow, throwing the light back into the room. Its size is at odds with the volume of the roaring storm soundtrack, and there is a sense of being small and untethered, of being carried along by forces and stories not our own.

Wind is also referenced in Havelock Stevens’ photographic work, ‘Sandhills and Shadows’ (2020)— a scan of a page from a family photo album, which shows a photograph of her great aunt standing in the sand dunes, the wind catching at her dress. The idea of turbulence reappears in four mixed media collage works via the flashes of lightning in a night sky. These branching shapes can also be read as roots or cracks. 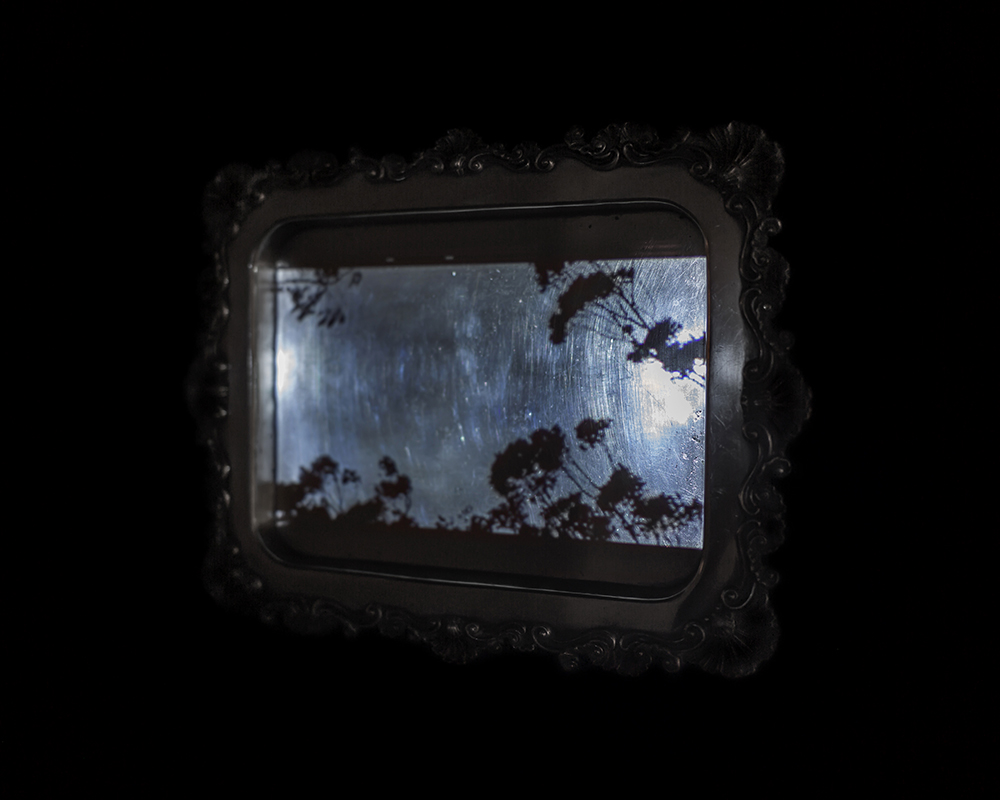 The neon installation, ‘HOLUS BOLUS’ (2020), offers a point of stillness, and its warm yellow light shines out over the darkened space like a beacon in the storm. The phrase in this text piece is a kind of catch-all, used when situations are too chaotic or extreme to be adequately named. Havelock Stevens heard her mother say it once, and the phrase returned to her in the wake of her loss. Now, however, the work has increased in resonance and ‘HOLUS BOLUS’ also speaks to a general feeling of being out of control and the collective grief felt during a year of fires, climate change, and a global pandemic.

In different ways, both Cescon and Havelock Stevens have created bodies of work that feel connected but fragmented. As the title says, they are works that offer pieces of spaces. This could be read as a reflection of breaking worlds and psychic trauma, but this fragmented structure also echoes an argument the poet Martin Langford once made about what he called the ‘uselessness’ of poetry. As Langford saw it, by attempting to simply share an experience without turning it into something else (and he was talking about experiences of nature), poetry was able to resist capitalism and its teleological narratives of triumph and enlargement. Here, however, Cescon and Havelock Stevens’ work seems to be resisting a different kind of progress.

As Carlin writes: ‘Just consider the famous ‘five stages’ of grief: denial, anger, bargaining, depression and acceptance. One might assume that once we arrive at acceptance, the final step, we are ready to move on. Yet mourning transcends a chronologically temporal plane—beyond ‘acceptance’ comes the lived experience of an ending. To borrow from French philosopher Jacques Derrida, death—or an ending—is always already existent.’ Cescon and Havelock Stevens are both working in this anti-time, and recording the ‘lived experience of an ending.’

We cannot overcome grief, Carlin says, because loss ‘radically transforms who we are, how we know the world. And so we must re-learn how to exist in this new space.’ Cescon’s landscape is at risk of being continually shuffled and reset, while in Havelock Stevens’ body of work, the physical and psychological landscapes repeatedly overlap.

The element of intergenerational, posthumous collaboration in Havelock Stevens’ work, with her mother, grandmother and great aunts present in different ways, also disrupts our ability to find a steady footing in space and time.

In an exhibition floor talk, Havelock Stevens referred to the death of a parent as a kind of rite of passage. While it might be a common experience, it is still a feminist issue in contemporary Australian society because of the way that caring duties fall largely on women. This is not directly addressed in the work, but it is present in its margins. 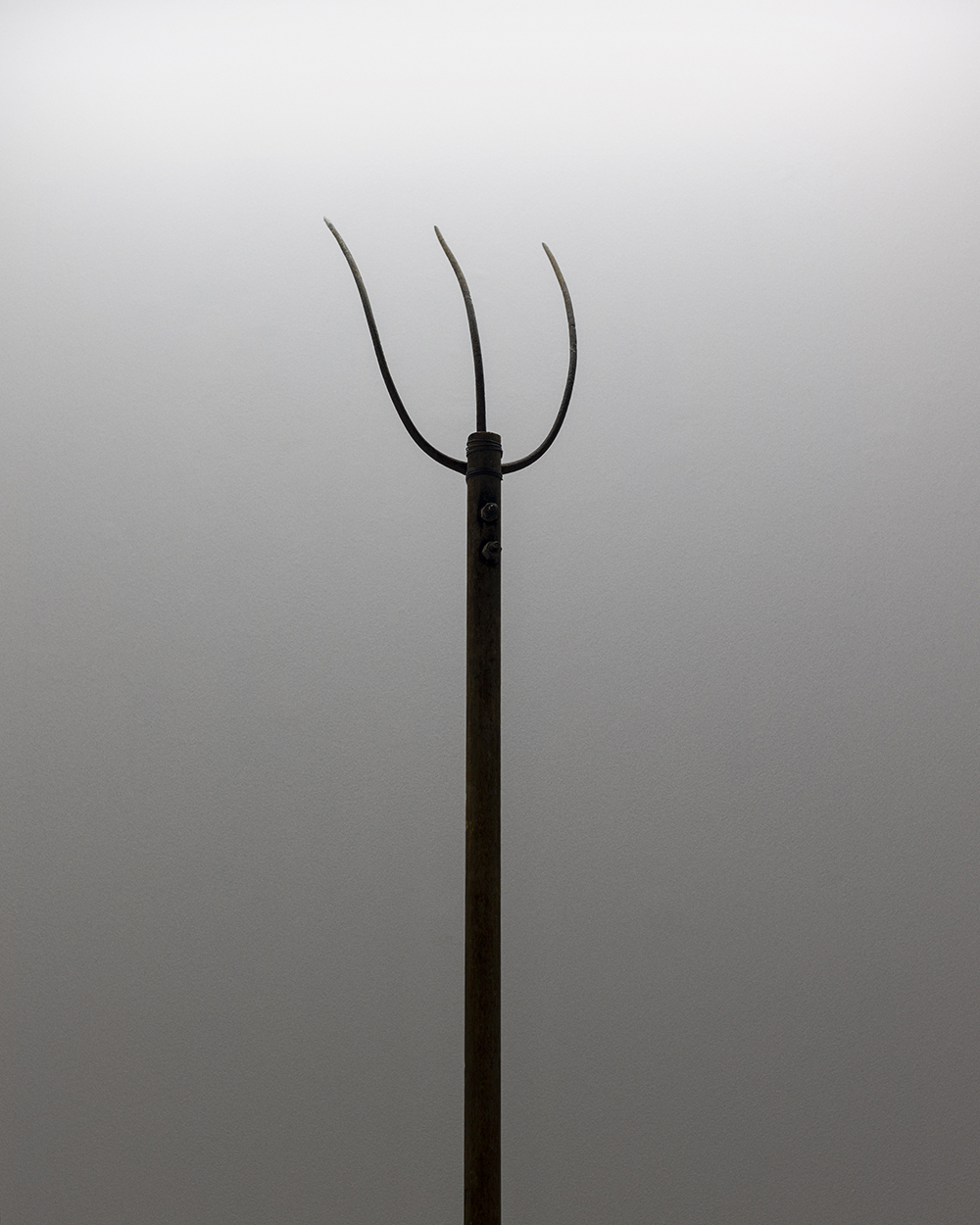 Feminism is also one potential way to view the collaborative project itself, which was an experiment with new models to support Cescon and Havelock Stevens’ individual practices and thematic interests. The exercise (as the artists say in their exhibition room sheet) was to pick four ways to express loss, absence, failure and, ultimately, love. However, it also seems to have been about engineering the emotional and physical space to consider their work on their own terms. The decision to exhibit in an artist-run space is part of this—and one that also speaks to the diverse and flexible roles that ARIs can play beyond providing pathways for emerging artists. In this case, the suburban context of the exhibition, in a semi-residential, semi-industrial part of inner west Sydney, also brings out a quiet subtext to the project about the interweaving of art, life, family and work.

Carlin reminds us that grief is a common, almost routine emotion. Our lives are filled with all kinds of beginnings and endings that transform us. But if we limit these moments, we also limit our capacity for growth and connection. ‘We are joined together in fundamental ways―one of which is grief,’ she writes. ‘Like love, grief is an experience that is profoundly personal yet shared.’ It indicates that something profound has happened and that we are in the process of change. In arguing why we must allow time for grief, Carlin turns to Jewish mourning rituals as examples of ‘holding spaces’ that create defined places where people can exist in their pain and share it with others. Yes, I think. This is what this what art can do. It can share experiences, in fragments, in anti-time. It can hold space.