Watching Bi Gan’s Long Day’s Journey Into Night (2018), I am reminded of another film: Vanilla Sky (2001). I have never seen it, but I have read the Wikipedia summary many times, often in periods of procrastination, or late at night, when the only thing that will quell my anxiety is the mental image of Tom Cruise, middle tooth and all, running through a deserted Times Square. The actual contents of the film aren’t important, only this scene, which is meant to be disquieting—behold, a public space abandoned!—but to me, only brings comfort. When I think about this scene, I like to imagine myself roaming through an abandoned cityscape until I reach its edge, where streets give way to…nothing, to an expanse so endless it must be virtually constructed. When I think about this scene, I fall into a deep, dreamless sleep.

In Long Day’s Journey, a man is searching for his lover who disappeared many years ago, so distantly remembered she may as well be a dream. The man, Luo Hongwu, never seems quite convinced of her existence, or his own. She appears to him, and to us, in hazy fragments: the flash of a green dress, a car disappearing and re-appearing as it moves between trees, a photograph with the face burnt out and a disconnected phone number scribbled on its back.

In many ways, Long Day’s Journey is like an inverse Vanilla Sky. While Tom Cruise is placed in a dream so well-constructed it appears as reality, Luo Hongwu is caught in a reality so elliptical it appears as a dream. Or a nightmare. The line between the two seems porous.  Luo continues his noir-ish, cyclical investigation in rural Kaili, unearthing no answers. Clues beget more clues. People refer him to other people, and they all remember Wan Qiwen, his lover, in different, disconnected ways—as a childhood friend, as an estranged ex, as a singer who drifted from place to place without aspirations of fame. 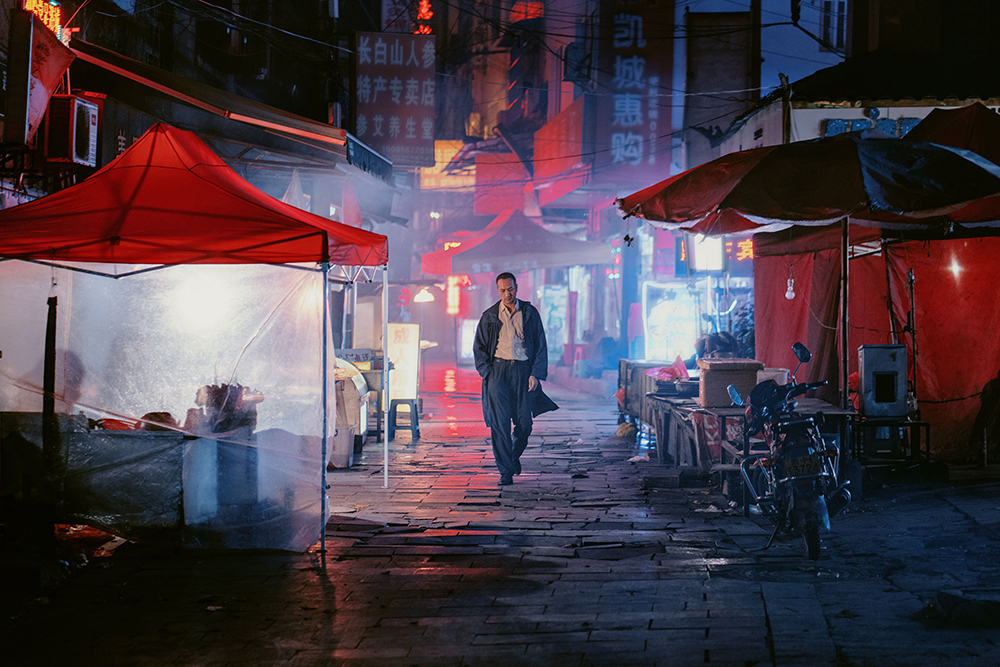 I have been having the same dreams my whole life. I can never recall them in their entirety, even though I have tried, many times, to keep a journal where I scribble half-formed thoughts into being, legible only for those seconds between sleep and wakefulness. Here is what I have gathered:

1. I am running past a playground, where a boy older than me is sliding down a long, red slide. ‘你要吃苹果的话, 你也可以玩儿,’ my mother says, which means, if you eat the apple, you can also play. We go home and she presses the flesh of an apple with a spoon against a metal bowl until the apple is mushy and fluffy, as if it’s been chewed.

2. In an empty void, a morphing shape expands, then shrinks, then expands again. Sometimes it grows so large it takes over my field of vision completely, unfurling into ambiguous colours I’m unable to name. This one is the most disturbing, and I wake up, sweaty and disoriented.

3. Everything feels anaesthetised. There is a long boulevard and I am walking towards something, or nothing. Briefly, I see W, a boy I once knew when I was living in Harbin, although I’ve forgotten his name.

4. I am flying, past landmarks and houses I no longer recognise.

Everything in Long Day’s Journey feels slightly condemned. Luo’s lovelorn search is condemned. Wan Qiwen is condemned, imprisoned in a mere abstraction without corporeal presence. Kaili itself is condemned, aimless and brooding, with mountain ranges that melt into grey, cloudless skies ready to burst with precipitation. News bulletins warn against impending mudslides and apocalyptic storms.

The soundtrack, too, feels cursed. It strikes something I am not sure I can fully explain, comprised entirely of songs from the new millennium—released in, or around, the year I left Harbin. The music is strange and estranged, ricocheting from wall to wall in cavernous expanses adjacent to (but never surrounding) us. ‘堅強的理由’—Karen Mok and Wu Bai’s 2001 breakup anthem which loosely translates to ‘How To Be Strong’—is sung in pitchy karaoke; S Club 7 gargles from a dance machine; Cantopop star Kelly Chen sends off Long Day’s Journey with a techno number that hits like ecstasy.

I wonder if this is how music sounds in dreams; almost familiar but not quite, like listening to songs from the bathroom of a party, like being submerged. Like Luo’s search: wanting, desiring, doomed. 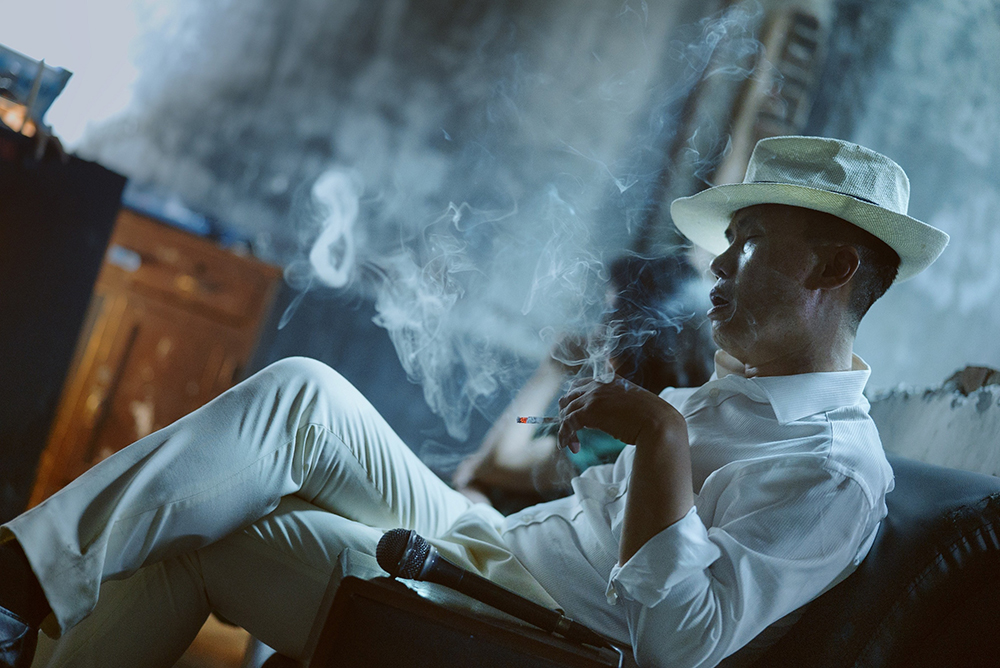 In Luo’s dream, as in all dreams, people reappear, transfigured and sublimated into subconscious desires, fears, regrets. A childhood friend who passed away awakens as a friendly ghost. Wan Qiwen is now a mysterious arcade owner named Kaizhen, her green dress is a red parka, her long hair a straight-cut bob.

When Luo flies, it’s with Kaizhen in tow. The world feels like it’s ending. It’s a cliché to say that time slows down, but that sense of time, too, is stretched thin like an elastic band waiting to snap. ‘Has the moon grown?’ Kaizhen asks, awed.

There is no doubt that Long Day’s Journey takes itself seriously, perhaps too seriously, without the kind of winking irony that might accompany the absurdity of its occurrences. But one very funny thing did emerge from its release: in China, the studio spent months cutting and re-cutting the film into a trailer that revealed only its most salacious moments—guns pointed at heads, puffs of smoke, kisses—while excising, completely, its lugubrious ennui. The film was released at the stroke of midnight on New Year’s Eve, to packed theatres of couples prepared to watch a blockbuster. Box offices boomed, and then the tide turned, swiftly. Online, a movement started: #Can’t Understand Long Day’s Journey Into Night.

There is not much to understand about Long Day’s Journey so much as there is to simply feel. And there are details in the film that have come unfocussed for me. I have convinced myself, for example, that a stray shot of a foot kicking a jade-covered book off a ledge is merely imagined, concocted by my brain the way we form false memories to justify unexplainable things. Call it a Mandela effect.

Sometimes I wonder if the events in my recurring dreams are actually memories, refracted and repressed. Obviously, I have not flown, but perhaps I have been fed mushy apple, or wandered Harbin’s icy streets alone with W. Once, a psychiatrist told me my visions of pulsating, colour-changing shapes were memories from the womb. I stopped seeing him after that, for other reasons.

I have been living in Australia for two decades now, but, in those dreams, I know with certainty that I am in Harbin. Like Luo Hongwu’s, my dreams carry implicit knowledge that cannot be transferred to an audience. I am situated by little more than that knowledge alone. There is a deep sense of certainty that permeates my dream state: things happen because I know they are happening, without any formal cause or presupposition. When I dream, I am not trying to rationalise my Harbin setting, or think about displacement, or intellectualise my diasporic experiences. I am not thinking at all.

Lately, I have been trying to will music into my dreams. I want to hear Karen Mok and Wu Bai and Kelly Chen again, angsty and anxious in their own ways. I think I am making up for lost time by revisiting songs I did not hear when they were released, but so far I have found no success. I am not a good lucid dreamer.

I imagine that, little by little, when this music does slip its way into my subconscious, it will sound something like nostalgia. Melancholic by the very nature of its reflection, always echoing from other rooms, hidden places, years past, memories lost. If I hold still, I might be able to set it to new contexts—to a wide-open Times Square, to Tom Cruise running, to a bird’s eye view of forgotten streets, to a landscape where the horizon is so thin it becomes invisible. My dreams and Luo’s might become one.