I have to start with the best: Betty Grumble’s Unshame Machine, in which she did a record 1000 cunt prints on a machine resembling a lat pulldown, accompanied by three of the finest new performers in that ever-evolving organism we loosely term the Sydney queer underground. Stelly G, whom many know from hosting at the Bearded Tit; Megana Holiday, like Emma Maye Gibson (Betty), trained in theatre; and Iya Ya Ya, from the Torres Strait via the inner west.

Grumble’s grace was evident in her acknowledgements, copious and sincere. Of the traditional owners; of her elders in performance—Annie Sprinkle, Diamanda Galas, our own Elizabeth Burton—and of her co-performers, their names called when each stepped forward to do a solo. Betty birthed the quartet this year in a show focussed on their diverse matrilineal heritages. As new as their collaboration is, they commanded the difficult mid-afternoon spot of Day For Night’s twelve hour marathon with the ease of an old jazz band, totally in the groove and enjoying one another’s company.

Megana’s drag king Craig Slist, bogan satire and satyr alike, did a routine to gay classic Male Stripper. Stelly G tucked away her brassy sass for an unusually contemplative piece where she husked coconuts in an ode to her Fijian heritage, not without humour. And Iya Ya Ya did a sizzling striptease to Beyoncé’s Brown Skinned Girl that ended with her smearing glitter all over herself. The soundtrack was a seamless, funky, Diva powerline woven together by Stereogamous, those nurturing uncles who watched from the mixing desk grinning from ear to ear. 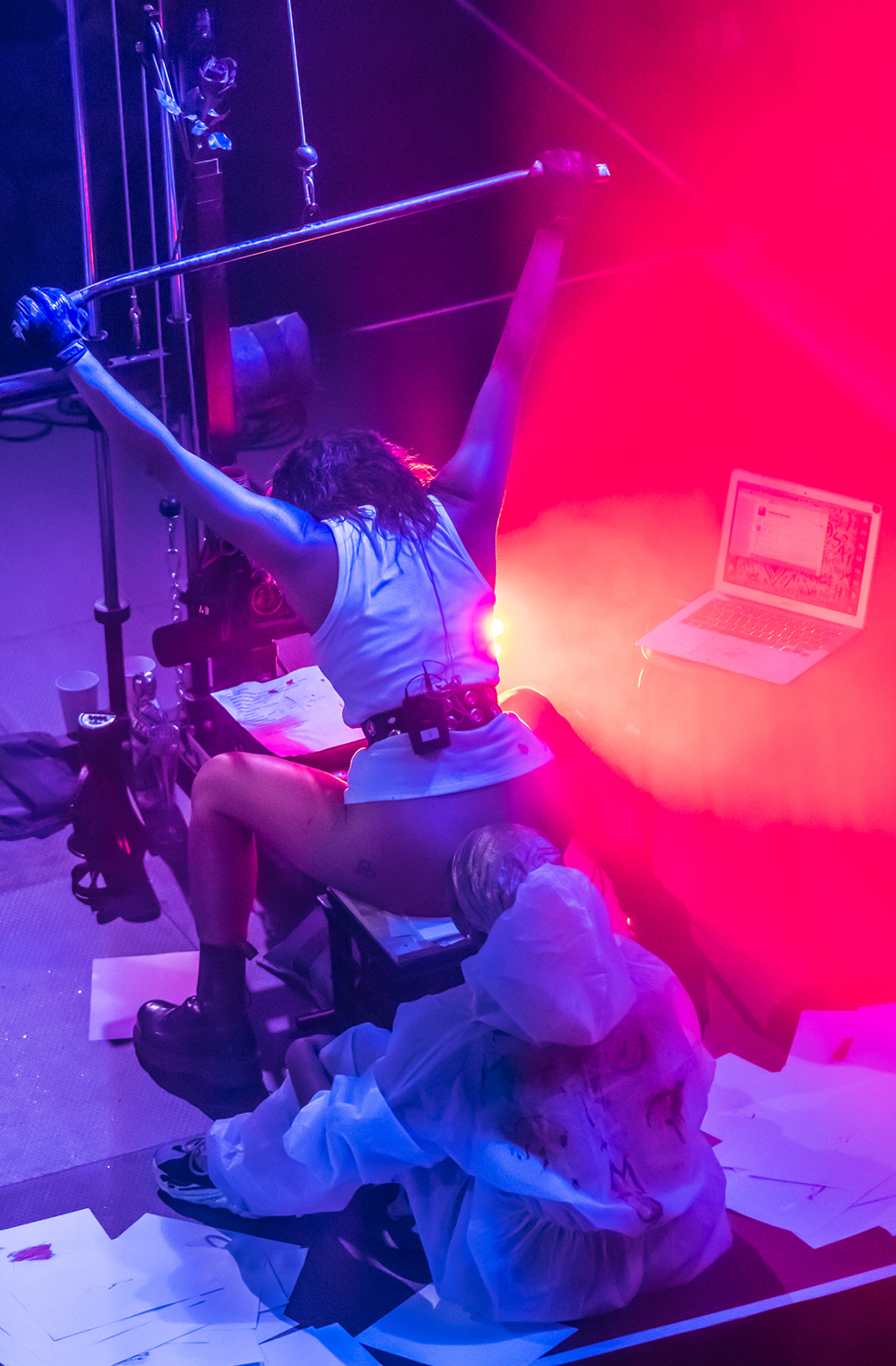 The show was perfectly placed on the main stage. Trans sister Zaya Barroso was also well directed, beginning on a catwalk opposite with a brave spoken word piece about sex workers. Suggestive, elliptical, breathy, (Available? Not available…) she strode up and down, then onto the floor, up to the main stage, taking us to an unexpected ending of wracking sobs. A prime example of a nightclub artist taking full advantage of more sophisticated staging and attention spans than is available in usual contexts.

I can’t say the same for Th3 Order, on earlier in the afternoon, whose conversational intimacy was hard to connect with due to them being mounted on the high catwalk. Samia Sayed and Anastasia Zaravinos also performed a dialogue, wittily activated by each dragging the other across the floor. It felt like a disruption, being in the middle of the space, but it has stayed with me. Colloquial, personal works are fundamental to this durational self-declared art party, but probably not plonked in the middle of a cavernous space. And cavernous it was, bereft of décor and installation, the air-conditioning tuned more for 1000 sweaty dancing men than the small, seated crowd occupying the first six hours.

The lighting was equally stark, and the area behind the catwalk contained sofas so dark they were hard to find: ideal for later perhaps, but in the afternoon just annoying. How ironic that I fell over a sofa for this reason, but later, when perched on the stage to watch a performance, was told to get off because ‘it’s dangerous: you might fall off.’ Oh well, wouldn’t be a real Sydney outing without being ordered around gratuitously.

There was a performance called MASC in the sofa nook early in the afternoon, in which masked, corseted GIRL (Jason Sweeney and partner) offered punters a card on which were printed hypothetical responses to masculinity. Our thoughts were recorded, to be fed into the mix later. I was kinda stumped because I couldn’t grasp how this would further the project of dismantling masculinity’s dominance. On the wall opposite ran neon texts containing aphorisms about feminism and the matriarchy. I thought how ironic this was, considering the amount of ‘older’ female performance artists who have been ignored by Liveworks for its entire duration: Julie Vulcan, Rakini Devi, Elizabeth Burton, Barbara Campbell, to name only some locals. 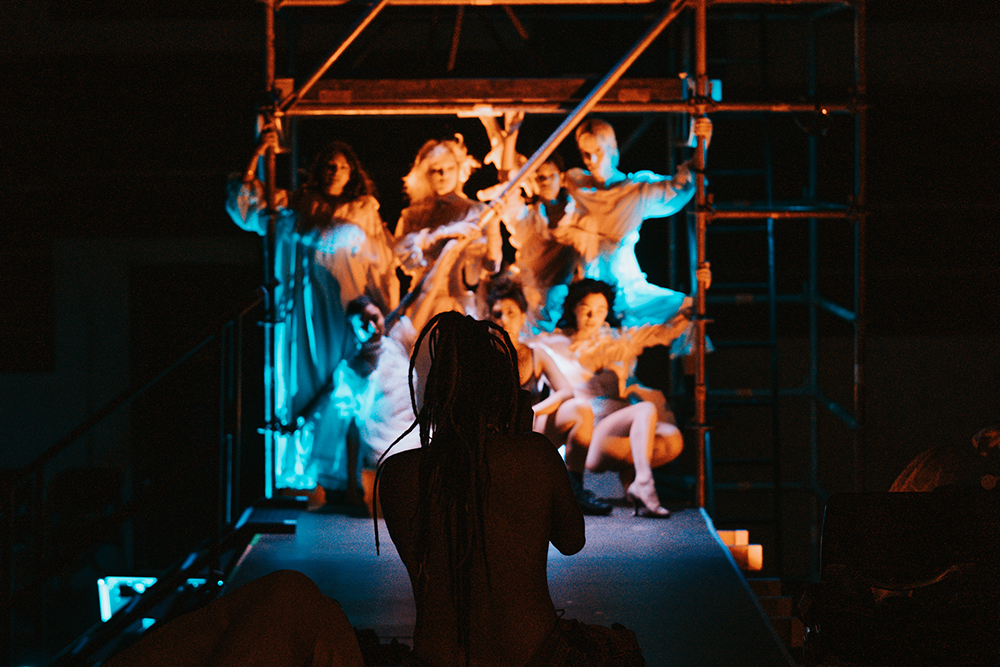 Th3 Order returned with Jermaine Dean, Taakatapui artist from Auckland’s queer Pasifika collective FAFSWAG, who had been conducting a photo shoot earlier on the catwalk. High on the scaffold, the trio enacted a ritual in which Jermaine’s dreadlocks were cut off one by one and tied to the scaffold, then his head shaved. I interpreted this as a grieving ritual, yet again found it difficult to connect to as the trio were so far away, and Jermaine’s monologue was blurred beneath the soundtrack.

Illness drove me home early, so my apologies to the artists I missed. I did try to catch Nick Wales, Ngaiire et al, but the first time I entered they were delayed and the second time I missed them. I hope the room filled later, but some foundations were missing.

Queer dance parties are theatrical events in which the main players are the punters. Sets crafted to space and theme are the bodies the audience flows through like blood. The acts curated are like the organs, pumping, filtering, giving, taking.

This synergy can’t happen in a cold cavern whose staging, one person later claimed, was left over from Chicks on Speed a few nights before.

I also want to remember last year’s Day For Night. Beautifully designed and installed, the quieter end of the room busy from the beginning with Bree van Reyk’s music piece fun, involving and aesthetically interesting. Child friendly too (my attempts to smuggle children into the first hour this year were also foiled: not a good look when the place was so empty). At the other end of the space, Radha la Bia’s little cooking shrine glowed, and she delivered the longest monologue I’ve ever heard from her, without a dull moment. The sex toys hanging from a line by the entrance set the Dionysian mood, suggesting to the audience how far we could go (all the way baby, why not??). I think they were connected to the performance in which you wrote down a fantasy, to have it read later by the artist.

Who was this wonderful artist, dressed literally as a bed, complete with satin sheets, the pillows bulging either side of her head like some crazy Duchess’s headdress? She took command of the main space later, got the audience seated in the round, and glided around imperiously reading the fantasies. By this time, we’d found a place to smoke joints and managed to smuggle in friends: signs of a good party surely. The fantasies the mad duchess read out were funny, ridiculous and dirty, and the room began to heat up. There was House of Slé, jaw-dropping vogue dancers, then the most splendid tribute to Candy Royalle by Hip Hop Ho, brother George Malouf, a pounding dance track that had us grooving and weeping at once, the crowning sets by Jonny and Paul Mac keeping us all on the floor. This is not nostalgia, just long overdue praise for an event I didn’t get to review, but still remember as the Day For Night that really hit the spot.