This is a sonic response to the exhibition Memory Betrays Everybody, presented in the Black Box at UNSW Art and Design. Curated by Anthony Bautovich, the exhibition featured the work of two artists—Dragana Jurišić and Biljana Jančić. To listen to this response, press play at the top of the page. The piece is best listened to with headphones, and the full tracklist can be found at the bottom of the article.

I came across an ‘Isitbullshit’ Reddit thread recently, where there was a discussion about whether you could test the purity of honey through a ‘genetic memory’.1 The test involved filling a vessel with water, adding a clump of honey, circulating it, and observing if a honeycomb pattern formed.2 It was being argued that the honey substance could replicate the hive pattern of its maker, which proved its ‘genetics’, thereby deeming it to be ‘pure’.

‘I remember thinking it all must be some sort of a joke.’3

Memory Betrays Everybody is an exhibition that engages with the complexities of (dis)located memory. Curated by Anthony Bautovich, and featuring the work of Dublin based photographer and writer Dragana Jurišić and Sydney artist Biljana Jančić, it considers displacement, the reliability of memory, and whether such memories can be recorded. Jurišić offers a documentary approach, retracing her 1991 journey through former Yugoslavia via a series of film interviews, images, text and sound. The various traces are taken from her photographic publication ‘YU: The Lost Country’ (2015) (a larger project that began in 2011 in response to Rebecca West’s Black Lamb and Grey Falcon (1937), a literary portrait of former Yugoslavia). Jurišić went on to reinterpret this book as a form of ‘travel guide’: a return to a lost country.

Memory Betrays Everybody features ‘YU: The Lost Country’ in its various parts—a large projected video work, where Jurišić reflects on her home and leaving it behind, a table laid out with both text and image pages from the book, and a curtained off area housing four TV monitors and an audio piece. Parallel to this hangs ‘Concrete (Variations 1-5)’ (2018), a series of vertical photographic vinyl banners by Jančić. The images (which are of tissues) are poetically ambiguous—appearing to be in motion, while also cemented in time. Taken together, the works4 foster a feeling of fragility and strength, which I can only describe as resistance. And a way to talk about resistance is through honey. 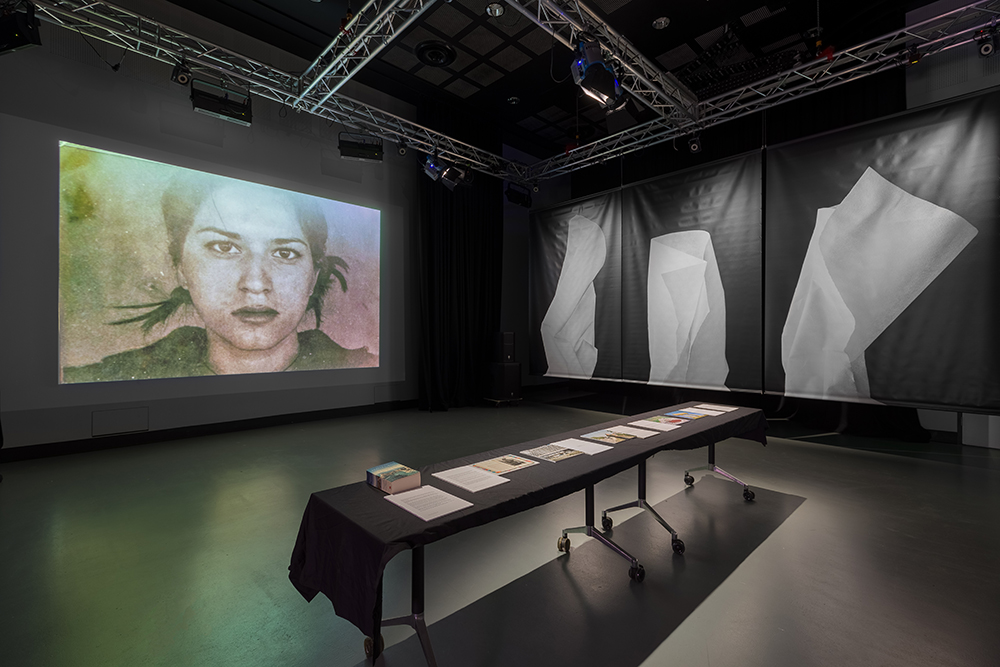 There is an internal friction in a hypothetically fluid existence.
Like honey, memories don’t always stick when or where we want them to.

Apis mellifera—European honeybees—are the most common type of honeybee.5 A worker bee visits between 50-200 raw materials to extract enough nectar in one collection trip to make a singular drop of honey. Each worker bee makes 1/12 of a teaspoon of honey in their six-week lifetime.

Memories are distilled experiences, the amalgamation of tangents, conversations and sounds. Like photographs and memory, ‘honey is a solution, not a thing in to itself’6—it is the result of the various encounters and topographies7 its makers have experienced. Congregating together inside a hive is at once an act of personal and collective remembrance, one that Jurišić similarly facilitates through wireless headphones in her audio work ‘I Remember’ (2015),  originally a text piece from ‘YU: The Lost Country’. We repeatedly hear the phrase ‘I Remember’8, followed by Jurišić’s personal experiences. This act of remembrance is a mantra of resilient9 retelling. Traces make up the bodies we encounter.

Honey on toast means that I’m under the weather.10 (I’m fighting infection.)11
Buttered and cut in four slices and, if possible, prepared by my mother.
Honey on a teaspoon means that I’m not as articulate as I could be. It’s on the tip of my tongue.
It comes in drips and drabs.

Honey: an ambiguous term of endearment. A feeling Jančić likewise evokes through the symbolism of tissues and the times in which they become necessary. It’s an intimacy that comes with proximity.

‘Then you come through like the sweetener you are, to bring the bitter taste to a halt.’12

Last year ‘Sniffer Bees’, funded by NATO Science for Peace and Security, were used to search for and detect lost explosives and landmines in former Yugoslavia (Croatia).13 The scheme relied on bees carrying the traces back to their hives. It functioned through collecting remnants of violence, and the architectures of memories seamlessly entering futures.

How do we trust something that isn’t always stable?
How can we rely on something we can’t control?
Where does one return to when a home is no longer there?

In 2007, there was international panic around the phenomenon of Colony Collapse Disorder.14 As a consequence of environmental decay and the demand from Western agricultural industries, Apis Mellifera were dying off at record rates.
The loss of home15 and forced removal often concerns violence,16 and it is a form of endurance only some must bear. 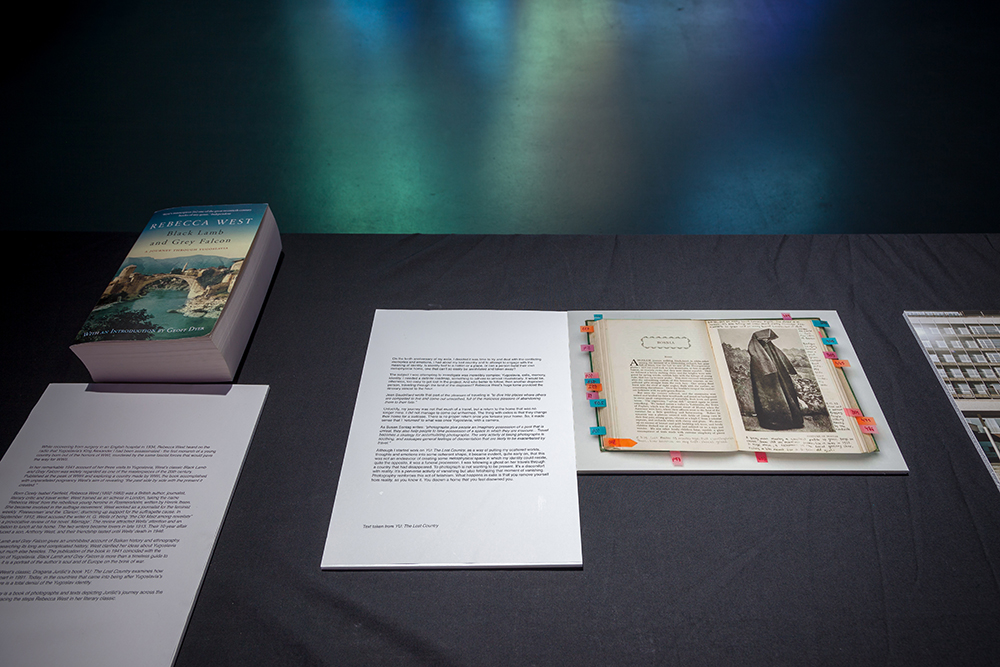 Native bees operate differently. Rather than having social hives like Apis Mellifera, they are solitary, existing in forests and the bush17 instead of dedicated pollination regions. Given the most common species of honeybee is now under threat, apiculturists, and the agricultural industry, see Native bees as an alternative for production. Violence is constant. So is honey. Worker bees metabolise honey to generate heat. Honey is ever present; hives cannot survive without it. In this way, honey is a survival strategy.

Sometimes in the process of retrieving honey, you can get stung. Or it leaves your hands sticky, attaching itself to everything you touch. ‘Memory betrays everybody.’18

Like honey, sound and memory seem to ‘come apart as soon as [they have] been given a particular shape.’19 They exist as something that can never be fully grasped and often attempt to return to where they started from. Through photographs and audio, Jurišić demands that former Yugoslavia, and its history, not only be seen20, but also recalled. Through her printed tissue monuments, Jančić attempts to solidify a sense of instability in domestic day-to-day21 realities, to secure a ‘particular shape’ and give form to feeling. ‘Remembering to forget—which is altogether different from forgetting’22 is a strategy that Jurišić and Jančić resist, instead calling for active remembrance.

Honeybees operate through ‘the propagation of communicative sonic pulses’23 in the same way that our land and body’s memory speaks for us, in rushes24 and heartbeats25, trying to say ‘remember me’.26 Memory27 is ‘grasping the hands of whoever will take hold of it’28, albeit temporarily.

Tracklist (In Order of Appearance)
Shirley to Shirley – Felicia Atkinson
Remember Me An old school whisper from an old school whisperer… – lucyswhispers
Shirley to Shirley – Felicia Atkinson
Mum at Kew Gardens – Eleanor Zurowski Voice Memo
Resting Heartbeat Sound – White Noise Collectors
And Then The Weather Arrives – Eileen Myles
Body Rushes – HELM
Birdsong of the Australian Bush – Wild Ambiance
How Not to be Seen. A Fucking Didactic Educational.MOV File – Hito Steyrl
It’s A Fine Day – Billie Marten
You And I In The Space Without Beginning or End – no_translation
I Remember – Dragana Jurišić
Gravitating Bones – Tsembla
White Ferrari – Frank Ocean
On Memory – Claudia Rankine
Concerning Violence (prod by Ngoma) – Walela Nehanda
Infection Supplement [感染补充] – bod [包家巷]
Friends in Jarvie Park – Eleanor Zurowski Voice Memo
Resting Heartbeat Sound – White Noise Collectors
Some topographies and folds – Rachel Blau DuPlessis
5 Perspectives on a theme that is yet to be composed – Hadas Pe’ery
i was in your house and waited that the rain might come – Jasmin Wing-Yin Leung 梁詠然
Home – Holly Herndon
I Thought I could Get away with it – Joseph Shabason