In place of a wall text, OK Democracy, We Need to Talk leads with a TV screen that plays a brief, simulated text conversation—a digital quarrel—between the curators and ‘Democracy’:

I think things could be better between us.
You’ve changed…

OMG…is this a conversation or a provocation!?

It is both—according to the extended curatorial statement from Adam Porter and Michael Dagostino.

Ok Democracy, We Need to Talk opened on Saturday May 18 at Campbelltown Arts Centre, the day of the Australian federal election. In preparation for the exhibition, ten commissioned artists were asked to respond to the idea of ‘a free media as a pillar of democracy’, and the curatorial statement describes Ok Democracy as ‘an open discussion about democracy and its future—or potentially—its demise.’ Indeed, the optimism that buoyed much progressive discourse in anticipation of a predicted ‘easy win’ for the Australian Labor Party still lingers in the galleries, even after the Coalition’s victory.1

Ok Democracy is marked by this optimism, in the sense that democracy is inherently connected to the ideals of ‘legitimacy, justice, freedom, and power.’ But, in the so-called-Australian context, this idealistic view remains contested. And, having positioned ‘Democracy’ as an interlocutor in an open discussion, the way in which this dialogue is being set up between the works remains unclear.

Philosophical pessimism, instead of being a negative disposition, is a refusal of idealism. It offers us the opportunity to attune to the marginalised narratives that run through the history of Western democracy—ones that remain urgently relevant in our present day. Many of the works presented as part of Ok Democracy speak to these marginalised narratives. Foregrounding such critiques of democracy, rather than maintaining a hopeful perspective, would encourage a far more effective conversation between the ten artists and their work.

Sarah Rodigari’s text and sound installation, ‘Composition For Eight Voices (Withdrawal)’ (2019), gets closest to exposing the assumptions that underpin the ideals of democracy. Amongst the cacophony of voices in this work comes the reflection:

Peoples rights, the voice of a nation, freedom of speech; those are principles that exist alongside and inform democracy but I don’t know if they’re, if they, actually constitute the notion of democracy.

What Rodigari’s text suggests is that democracy, as a system of governance, is not constituted by a set of rights, but by the production of consensus in a society.

Though only one reflection in a much broader piece, this perspective allows us to question how such a consensus is produced, and how we want to participate in its production. Rodigari’s work, created in dialogue with workers from within and beyond the arts, centres withdrawal from the majority as a strategy for dealing with political injustices.

This approach is a far cry from the direct tactics being implied in the imagined text messages at the start of the exhibition.

Historically, a refusal of idealism has been used to critique the everyday injustices that maintain power imbalances under democracy and to question grand narratives of freedom. In Discipline and Punish (first published in 1975), Michel Foucault argues that, in Western democratic society, political power is structured and maintained in equal measure by a promise of equal rights and by ‘the disciplines’: ‘those systems of micro-power that are essentially non-egalitarian and asymmetrical,’ which support democratic governance in the West.2

Amongst the works in OK Democracy, Eugenia Lim’s bicycle-powered video work, ‘On Demand’ (2019), explores a crystalline example of how these disciplines function in contemporary society. As visitors pedal, they power Lim’s video and sound installation, which then displays footage of five gig economy workers performing meditative choreographed movements. Alongside these movements, the artist reads statements from the workers about their precarious, dangerous, and exploitative labour conditions. 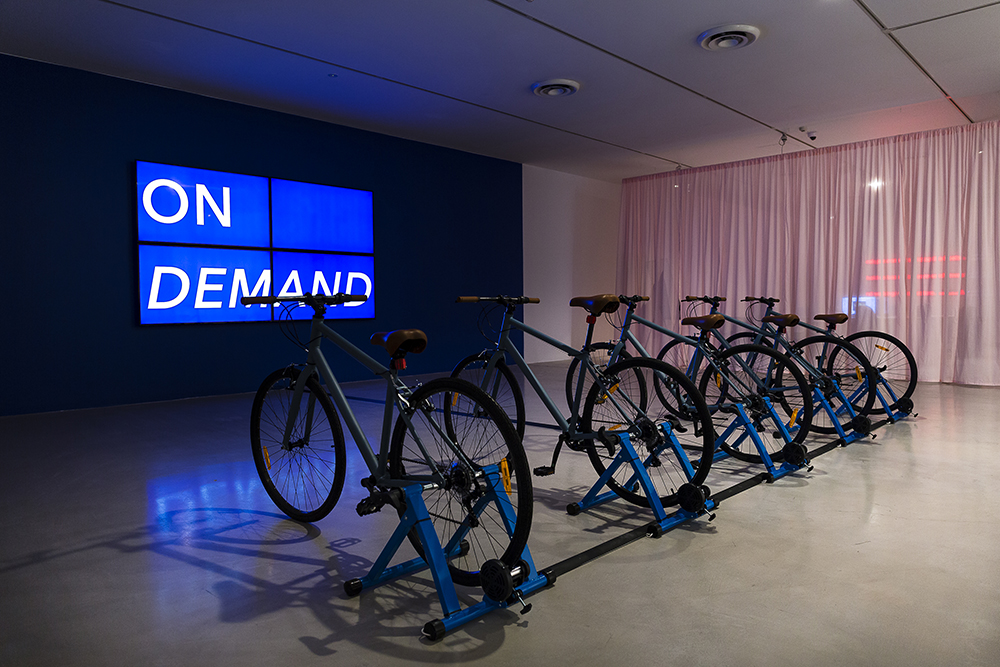 One worker’s statement explicitly describes the ways in which these labour conditions produce political subordination, as well as social and financial vulnerability. Another considers how migrant workers are disproportionately affected by the gig economy. Like Rodigari, Lim engages with the idea that capitalist exploitation and political oppression are intimately linked. Through highlighting the material conditions that produce alienation and disenfranchisement in our political present, Lim refuses an idealistic understanding of democracy.

Such conditions, deeply embedded in Western democracy, are explored in Frantz Fanon’s The Wretched of the Earth (first published 1961). His infamous call for a specifically African democratic project is marked by the altogether astute characterisation of Western democracy as inhumane and violent. ‘Let us leave this Europe,’ he implores, ‘which never stops talking of man yet massacres him at every one of its street corners, at every corner of the world.’3 Europe is cast as pathetic. It would be laughable if not for its abject cruelty.

Fanon’s knowing tone is not so far from the sardonic video work by Richard Bell—at once the biggest star and the only Indigenous artist in the exhibition. Though his Venice Biennale application was not approved, Bell crowd-sourced the funds to produce ‘Embassy 2019: ART. IN. ACTION’ (2019). The work is part of his continuing ‘Embassy’ project (2013-ongoing), which draws on the history of the Aboriginal Tent Embassy, established on the lawns of Australia’s Parliament House in 1972. Across the multiple works that make up this project, Bell implicates the spaces of art in the politics of land rights and the sovereignty of Indigenous peoples. 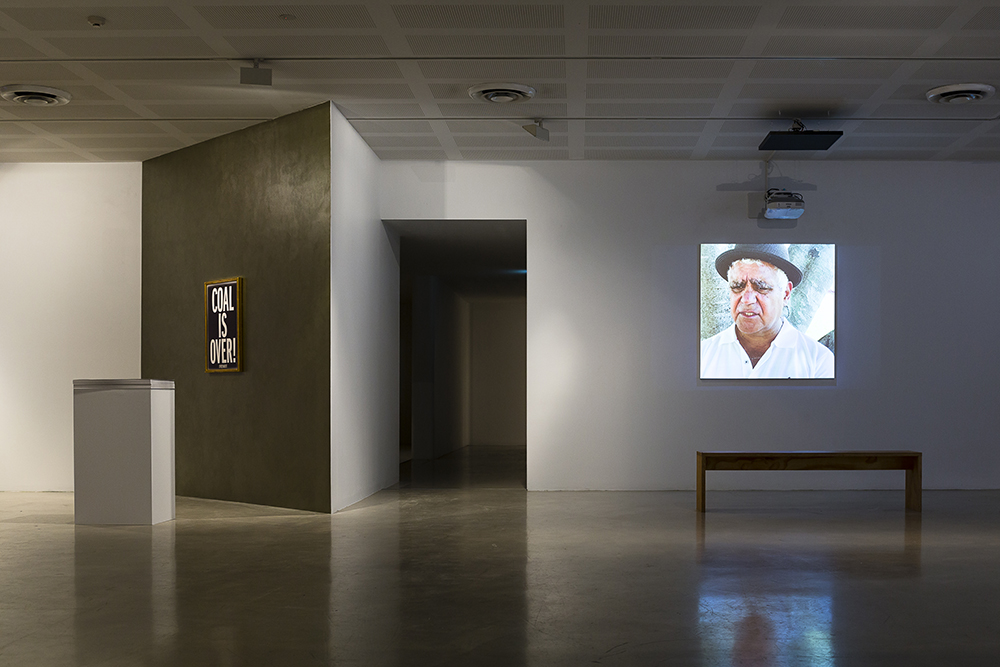 Positioned as the final work in the show, Bell’s contribution is a loop of campaign-style videos with sound produced for social media, projected onto the wall of the gallery. ‘Let’s talk about the problems of the art world,’ he says, standing in a gallery space while holding a football in one hand and wearing a head guard. His tone moves from sincerity to sarcasm and back as he deftly draws links between art world elitism, social inequity, and political oppression. Bell seems triumphant as he rejects both the politics of the art world and a Western democracy illegitimately imposed on sovereign Indigenous land. The work is singularly brash and deeply brilliant.

OK Democracy, We Need to Talk is certainly a provocative and timely exhibition that brings together a diverse group of voices, demonstrating the capacity of artists to critique the political sphere. Yet, in some ways, these voices don’t seem to fully connect with each other as much as they do with an overarching concept of democracy’s true goals. However, in some of the works, there is an undercurrent that withdraws from, rejects, or refuses idealistic understandings of democracy, and this emerges as a mode of resistance. Following the reelection of the Morrison government, it is this undercurrent that suggests ways of creating networks of solidarity and care beyond the dominant political system.