How do you conduct a search party for a phantom actress?

Darren Sylvester’s solo show, Out of Life, now on view at Sullivan+Strumpf, is a speculative narrative on mortality, nostalgia and magic, orbiting around a 1970s-era space-suit Sylvester discovered at a Hollywood costumes auction. Metallic and radiant, with moon-grey sleeves and croissant-puff shoulder pads, its lack of filmic reference meant that it was hardly a collector’s item. It had one clue: the word ‘Stacey’ hand-scribbled on the inside tag. Was this the actress’ name or the character she played? For Out of Life, Sylvester summons Stacey out of her pop culture graveyard, resurrecting her as a B-grade actress trapped in character and abandoned on an interstellar film set for eternity.

Her pseudo-presence is captured in ‘Stacey’ (2018), a large-scale photograph of a twenty-something blonde actress engulfed in laconic glam. Clinging to an amethyst boulder, she searches for signs of contact in an acme of fading stars. Evanescing into a script-less abyss, she remains sanguine, like a gritty vampire on low blood energy, waiting ‘for her scene to be called, a battle to begin, for love to arrive—or somehow, to go home.’ [1] It’s said that stars can live for millions of years in the sky, but you can tell a star is nearing death when it loses its glow and burns dim. I think of iPhone ellipsis bubbles—how they beam when someone is about to reply to a text message, but vanish the moment they decide not to respond. Stacey’s galactic limbo is scattered with these elliptical stars, a flirtation with potential rescue.

At polar ends of the gallery, Sylvester has designed a communications portal for Stacey that traverses space and time: a duo of exquisitely-etched, mirror-faced Ouija boards. Marked with the customary alphabets and numbers used to converse with spirits, both versions are also injected with social ideograms looping back to Stacey’s era. A sugary ode to the popular American breakfast cereal, ‘Lucky Charms Ouija’ (2018) offers good luck talismans in the form of shooting stars, horseshoes, four-leaf clovers and rainbows. Its sibling, ‘Dingbat Ouija’ (2018), is festooned with pre-emoji graphics, or Dingbat fonts, introduced by Microsoft into all Windows computer programs to allow for universal communication. Smiley face, lonely island, endless road, question mark—such signifiers translate into various visual and mental associations, turning images into a form of magic that connects visible and unseen things. 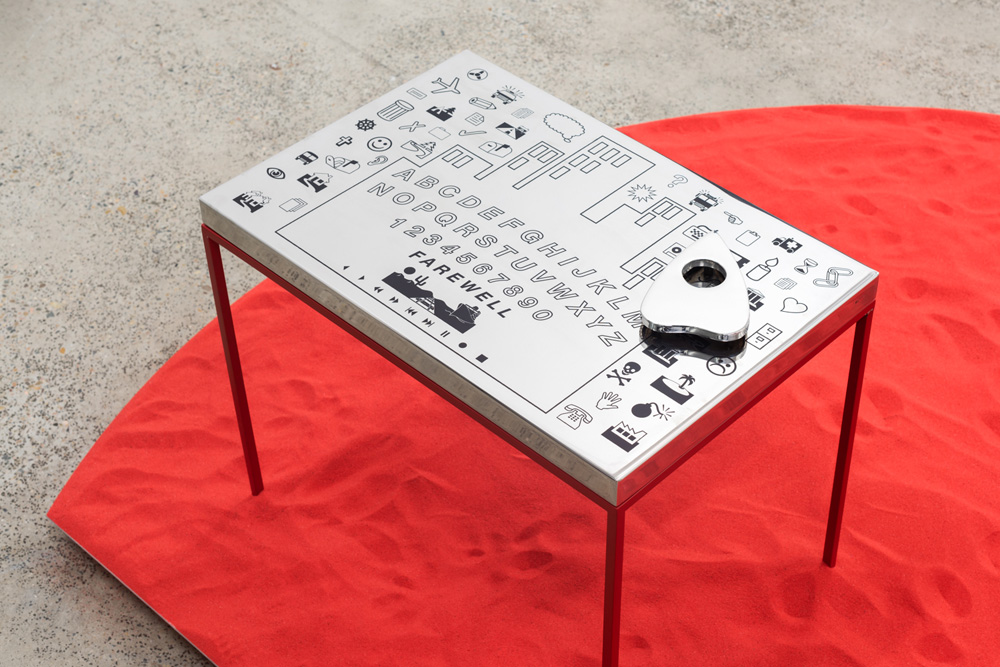 I bump into Sylvester briefly during the exhibition opening, and we riff off the pointing hand Dingbat—the artist telling me about his former job as a hand model for white gloves. He perfected the svelte, elongated poses by contorting his fingers and pinning excess cloth under his palm. Nowadays, he operates like a conductor or puppeteer, assembling characters and scenes, often behind the lens. Our chat makes me drift towards the social syllables of hands: gesturing hello, goodbye, high-five, stop; the feeling of a caressing stroke, a burly handshake,  a new gang sign.

I think of hands that connect: a phantom controlling a spirit board, an artist plucking out a vintage costume, an actress throwing up her hand for a dream role. A white glove is an invisible hand, in the same way that a Ouija board is spectred by an unseen touch.

This approach echoes Slavs and Tatars’ propensity for ‘sneaking behind’ the meaning of words or objects in order to expose their multiplicities, to discover buried stories, or to simply sound out their layers—like the phonetic similarity of ‘princes’ and ‘princesses.’[2] It makes me unpack the word ‘stay’ and how it’s verbalised inside ‘Stacey’ whenever her name is spoken.

The Ouija boards have been perched on alien terrain, a kind of pod-like embassy filled with scarlet sand. Pockmarked with cryptic patterns, the ground hints at several possibilities: attempted contact, a faded SOS scrawl, marked territory, or a magic equator between both worlds. It incapsulates the placeless feeling of being ‘in character’ forever, typecast into a role that muddies the real and the imagined. It feels spooky to treat these works as technically asleep, on pause, waiting for the call to fulfil their function. I’m tempted to conjure Stacey with my loitering hand, but of course, white-cubed artworks shouldn’t be touched, let alone play host to clue-spitting spirits. As it stands, the pointer is like Stacey: it assumes a dormant role until it’s given directions. I whisper hypothetical questions for now— 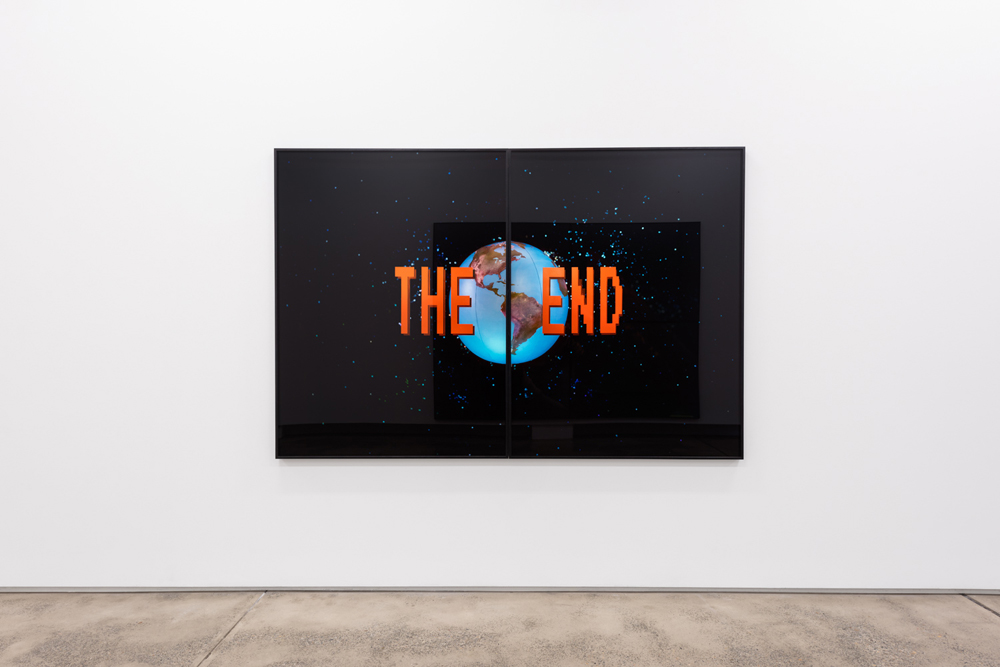 ‘Photography is the inventory of mortality,’ writes Susan Sontag, because it shows us the vulnerability of lives heading towards their destruction. [3] Elbowed into the corner, ‘Out of Life’ (2018), reveals an image of Stacey slumped on dunes, coffined by further melancholy. Dark roots smudge her hair, signalling time has passed—she appears to be done with acting, tired of waiting, rid of life. Like Juliet waiting for the poison to kick in, she takes control of her scene by turning away from an emptied night of thinning hope, resolving herself to the next life.

Several cultures believe that you die three times: first, your body shuts down; second it’s buried in the ground, out of sight; and third, your name is spoken one final time. Sylvester is exalting in Hollywood’s fixation for preservation and reinvention by keeping Stacey alive—recasting her character, unearthing her myth, and spellbinding her name.

I recall Christian Boltanski saying that an artist’s role is to be a mirror that reflects their viewers, and in turn, the viewers complete the story of the artwork. [4] Right now, as I hop on Google, I find myself transfixed by the blinking cursor in the search engine—it’s waiting for a new line, a fresh query. I punch in the question ‘where is stacey?’ A few clicks lands me on a ‘names’ archive site, and I learn that the name ‘Stacey’ derives from the Greek word ‘Anastasis.’ It means resurrection.