This is the first review in a three-part series produced in partnership with Sweatshop: Western Sydney Literacy Movement and Diversity Arts Australia, as part of the StoryCasters Project.

The hadith—The entrance to Paradise lies at your mother’s feet—is well-known among Muslims. Often quoted, the phrase symbolises the lofty and sacred status that mothers occupy in the spiritual wellbeing of individuals and society. Of course, motherhood, mother figures, and even motherlands, can also be volatile sites, shaped by complicated histories, violence, neglect or even loss.

Lara Chamas’ exhibition, The Entrance to Paradise Lies at your Mother’s Hands (presented at Gertrude Contemporary in early 2021), takes its name from this famous hadith. But here, Chamas experiments with the original words, substituting hands for feet, and honouring the manual labour of women in the domestic sphere. However, this labour is not confined to the nuclear family and the home; Chamas’ mixed media works consider the role women play in nourishing, educating and protecting societies against a backdrop of violence and political instability in Lebanon. 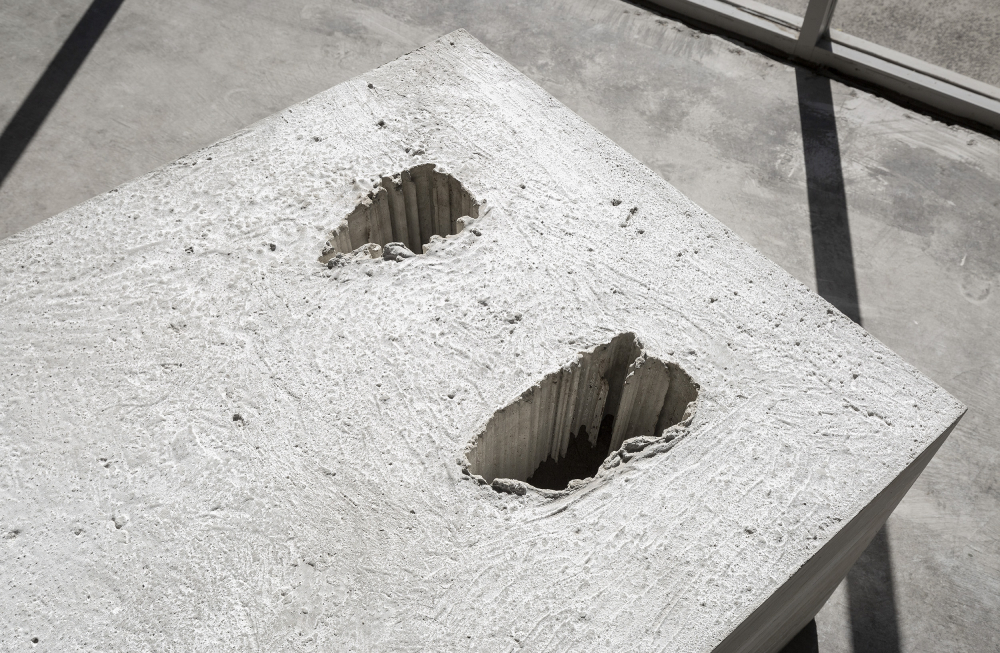 Lara Chamas, Shapes she wore into the prayer mat, Teta (baba) (2021)
Detail, as featured in The entrance to Paradise lies at your Mother’s hands
Image credit: Christian Capurro, Courtesy of the artist and Gertrude Contemporary

Over a Zoom call, from her home workspace in Melbourne to mine in Sydney, Chamas says her work is grounded in decolonial and feminist theory that features storytelling as a “primary tool of knowledge”. Chamas’ round glasses flash in the light of her computer screen as she flicks through images of her process. We engage in our own storytelling, exchanging scattered memories of our shared homeland. Chamas mentions that her exhibition includes a real bullet shell from the 2006 Lebanon-Israel War, which triggers a ripple through the skin of my forearms. I tell her that my grandmother was one of the 1,109 Lebanese people—overwhelmingly civilians—who lost their lives during that war.1 Chamas and I discuss the consequences of war for women; a theme that runs through my creative practice as well as hers.

We talk about the ways in which a mother figure is often a person’s first source of knowledge and authority. Yet, this knowledge, transmitted orally and through touch, is not regarded as authoritative in patriarchal societies and institutions. “Why can’t I reference that?” Chamas asks rhetorically with a smile, referring to the stories matriarchs share while they roll wara ’anab and carve out the mushy centres from coosa using rudimentary but foolproof tools.

Chamas documents this exchange of stories through a series of audio-visual recordings that feature conversational interviews with matriarchs in her own family. She captures hands kneading, rolling and gesturing mid-conversation. Given Lebanon’s history, these actions represent a lot more than the drudgery of domestic life; they become acts of joy, care and resilience against uncaring and oppressive structures. Four kitchen tools are included in the exhibition: a parsley knife, a zucchini-corer, a ma’amoul mould and a pestle. Cast in bronze, these objects were handmade by Chamas’ grandfather and given to her mother when she got married and migrated with her, years later, to Australia. 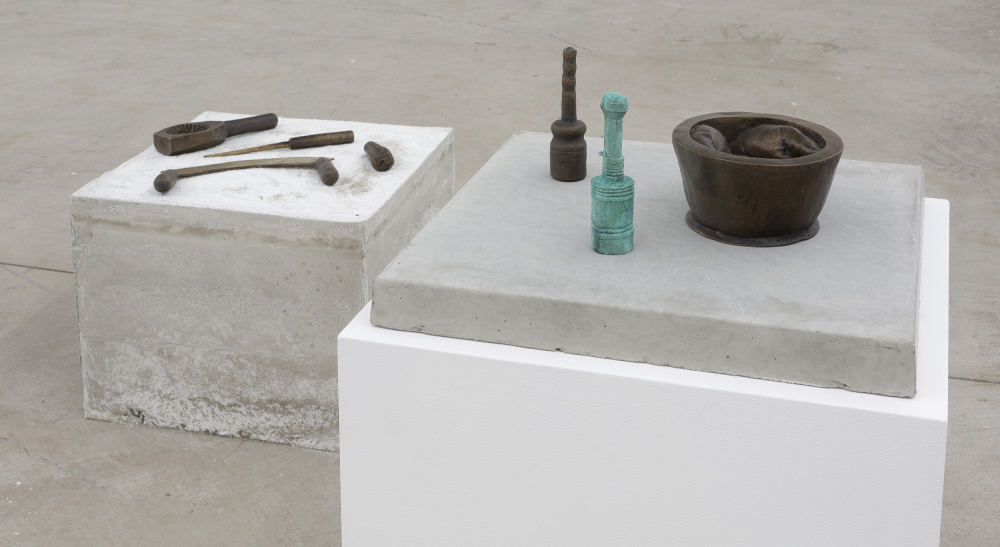 Building on the ways in which objects carry meaning and memory, Chamas’ work also includes various cast objects and sculptures that play with words. There is a grenade spliced with a pomegranate. The former, an explosive, is named after the latter, a fruit deemed significant in each of the Abrahamic religions. One consists of flesh, while the other is designed to destroy flesh. The juxtaposition here is powerful, suggesting the passivity and indifference with which society tends to accept violence against some bodies, even while professing to be against it.

Chamas has also cast her mother’s hands inside the recess of a mortar. The hands are upturned as though performing du’a—prayer. Chamas points to the irony here, as the pestle becomes a weapon which grinds against the hands of an Arab woman who is, in turn, racialized and labelled a “terrorist”.

There are bullet-like dates, and bunches of wax grapes resembling bomblets in a cluster bomb—a reference to the hundreds of thousands of cluster bombs dropped by Israel during the final days of the 2006 war.2

Fossilised as wax sculptures, these objects do not carry any threat and yet, they make me uneasy. I am reminded of a story. From relatives who survived the 2006 war, I heard about a neighbour who was sheltering in his house when a bomb crashed through a wall and landed on the floor before him without detonating. SubhanAllah! There is a tendency in people narrating these events to describe this incident as a miracle, rather than the failed attempted killing of an unarmed civilian in his own home.

Has the expectation of violence become so routine that the deliberateness of it is forgotten? Or is it, perhaps, easier to spiritualise a painful experience than confront seemingly insurmountable political realities?

The centrepiece of the exhibition is a concrete abstraction of the rug Chamas’ grandmother used to pray upon. The original prayer rug is a family heirloom and the only tangible reminder the artist has of her grandmother, whom she has never met. There are holes in it where her grandmother’s knees and feet would have been.

I find myself pondering the number of times the artist’s grandmother expressed her hopes and fears, standing, kneeling and prostrating on this rug, the weight of her prayers wearing the fabric into threads and then nothing. From here, I find myself pondering the gravity of the prayers that, collectively, the women who lived and survived Lebanon’s wars have infused into their rugs and rosaries. 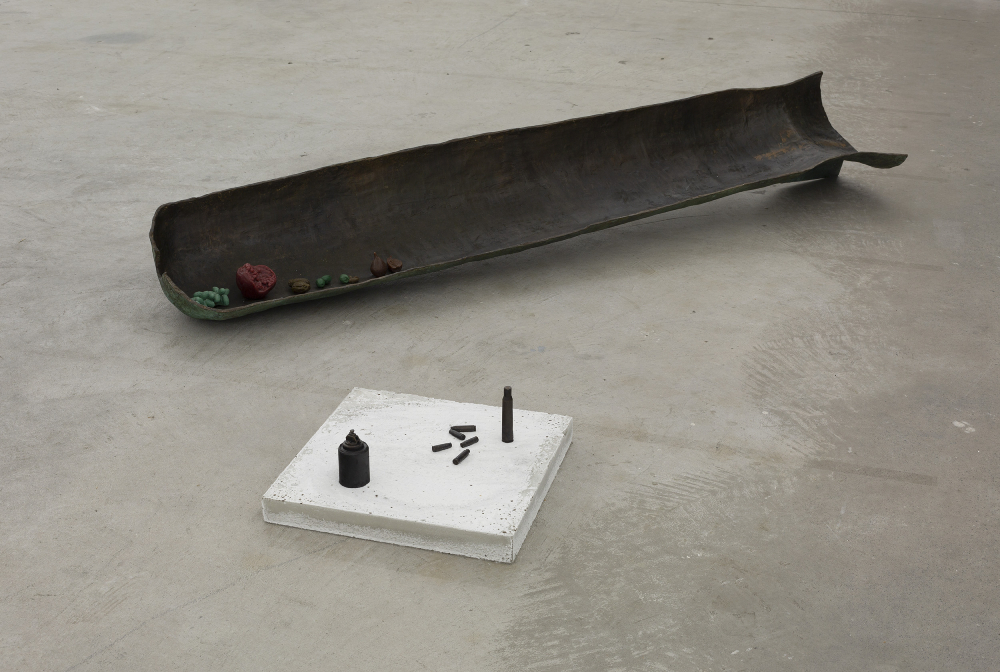 While cold hard materials like bronze, glass and concrete are not typically associated with the softness of a woman’s hands, or the velveteen of a prayer rug, Chamas successfully renders these materials into ethereal forms. The concrete sculpture representing her grandmother’s rug is monument-like, transformed into an enduring memorial to all the matriarchs whose power, agency and labour is often forgotten. Chamas has also produced a glass mosaic version of the rug—glass giving it a mirror-like quality that instantly reminds me of the reflective aspects of prayer.

Reflection is a central theme in literature on Islamic spirituality. Ghazzali, for example, says “some hearts are like mirrors”, and, in one hadith, the Prophet Muhammad ﷺ likens the human heart to silverware that requires gentle but regular polishing. This metaphor refers to the continuous process of self-reflection, compassion and accountability we are required to engage in, as we polish our internal mirrors until they reflect divine attributes.

These thoughts are disrupted, however, as I recall the explosion of the Beirut Port in August 2020 in which we witnessed the same materials—concrete, metal and glass—transform into deadly shards that collapsed the city’s streets into dust and rubble, a consequence of decades of neglect, exploitation and corruption. Members of the diaspora, like Chamas and me, witnessed this event from a safe distance, and we struggle to articulate its psychological impact. As Chamas says, “the ambivalence I feel towards family, love, politics and war are a thing of the past, present, and sadly a thing of the future, in Lebanon and globally”.

Despite this ambivalence, there remains a sense of resilience in Chamas’ work. The women emerge as heroines against colonial and patriarchal machinery, engaging in daily acts of remembering, caring and knowledge-sharing. This is what rises from the rubble after destruction, and it is what keeps hope alive for future generations.