‘Since fun is pleasure without guilt, as in the euphemistic ‘fun-loving’, we are bound to feel it must be inherently trivial; in a Judeo-Christian culture, half the fun of the thing is the guilt, anyway.’
Angela Carter, ‘Fun Fair’

There’s a new show in town. There’s a new town too. An hour and a half from Sydney, on the steamy Central Coast, the Naughty Noodle Fun Haus has just put on its third cabaret since November—this time in Woy Woy, at the perfectly kitsch Everglades Country Club. Fun! Burlesque! Circus! Fringe! Drag! Performance Art! Comedy! Slapstick! The Naughty Noodle is the brainchild of Glitta Supernova, who has been lighting up Sydney’s queer underground since the 1990s and moved to Umina Beach seven years ago.

A low-slung 1960s building set in acres of green, the Everglades is the Noodle’s biggest venue yet. The queue went on forever and the room seated a massive two hundred and fifty, with large round tables of combined parties. Beneath the ceiling a-glitter with fairy lights, cradling wineglasses brimful for only $6.50, those of us accustomed to the cramped quarters we’re lucky to get in Sydney were awestruck. But we were a mere handful: the audience was local, and primed. ‘We’ve been to every one,’ said Wonder Woman, seated opposite, dressed to the hilt for the theme of Sheroes. ‘We love it.’ 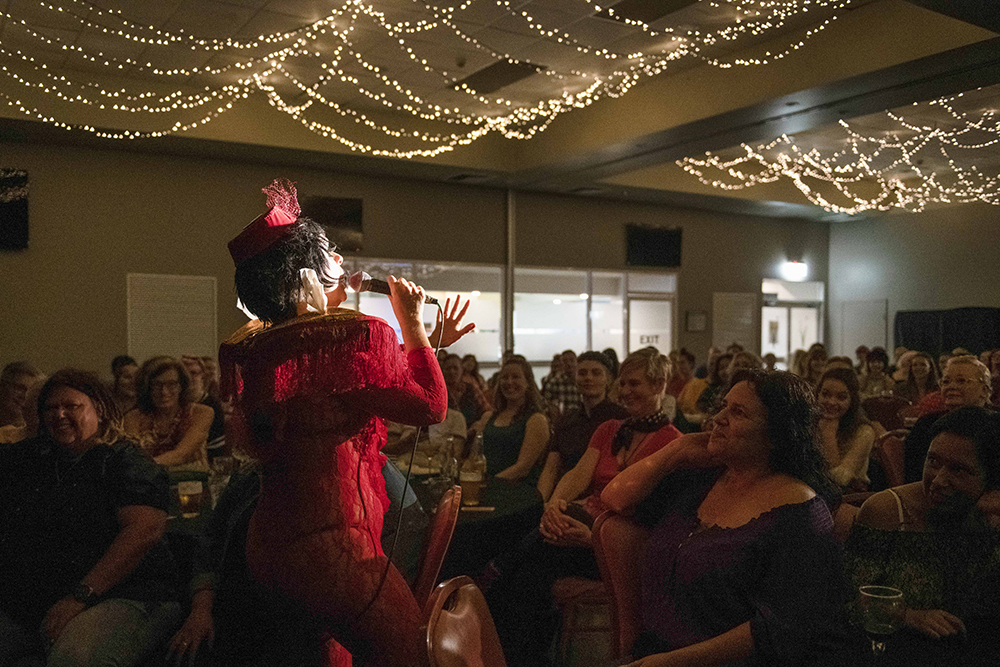 Glitta took the stage as Mistress of Ceremonies in a red lace body-stocking and short sequinned jacket whose shoulder pads doubled as tissue boxes. ‘Diversity’s normal,’ she said. ‘It’s just not represented.’ What sounds like shtick in other contexts, here is genuine and fresh, and the line-up fulfilled this vision effortlessly.

First up was Alyssa Kitt, a copper-haired burlesque queen dressed in vintage style with vintage music, all wailing brass and crashing cymbals. She did a short strip-tease, most of our attention going to the luscious peacock tattoo adorning her left side. Then came Kilia Tipa, also known as Koco Carey, star of Asia-Pacific vogueing royalty House of Slé. Kilia is one of the best dancers in Sydney right now, so to say her singing isn’t as strong doesn’t mean it isn’t good. She has an ever-growing range and burns with natural charisma. In a skimpy dress and heels, scant make-up and hair piled up messily, she seduced like a cocktail chanteuse just out of bed.

Photographer C Moore Hardy did a slideshow, the images bursting with so much energy the pace of the evening didn’t flag. C Moore’s rich archive of queer Sydneysiders on the streets and at parties goes back decades, but tonight’s collection wasn’t given adequate explanation. It has great potential, most obviously to complement the work of pioneer William Yang, but more importantly to stand on its own as a collection in which women are central.

We were given two songs by Corrie Hodson, resplendent in a long red gown and Duchess-like headdress with three petals for the Aboriginal colours, the middle one covered in gold glitter. A local, with Wiradjuri heritage from the Riverina, Corrie was making her debut, but you wouldn’t have known that. Her songs had a warm, honed feel, and in the second her voice really hit its stride. Ushering Corrie off, Glitta pulled a tissue from her shoulder pad and snivelled, ‘I had a moment.’

Then came Sarah Birdgirl, fresh off the plane from London with her bed of nails (packing advice anyone? Ask the carnies). ‘KooKoo the Birdgirl, natural born freak’, though programmed at the last minute, was intrinsic to the show. Reimagining the character from the 1932 film Freaks, Sarah was all 21st century with black tape over her nipples, bare feet and glittery eye make-up. Small and packed with muscle, she combined hoops, angle grinder and the bed of nails for a stunning finale fountain of sparks. For her second show she wore the giant bird feet booties her namesake was famous for, reminding me somehow of Aqua Boy in the classic sideshow novel Geek Love. 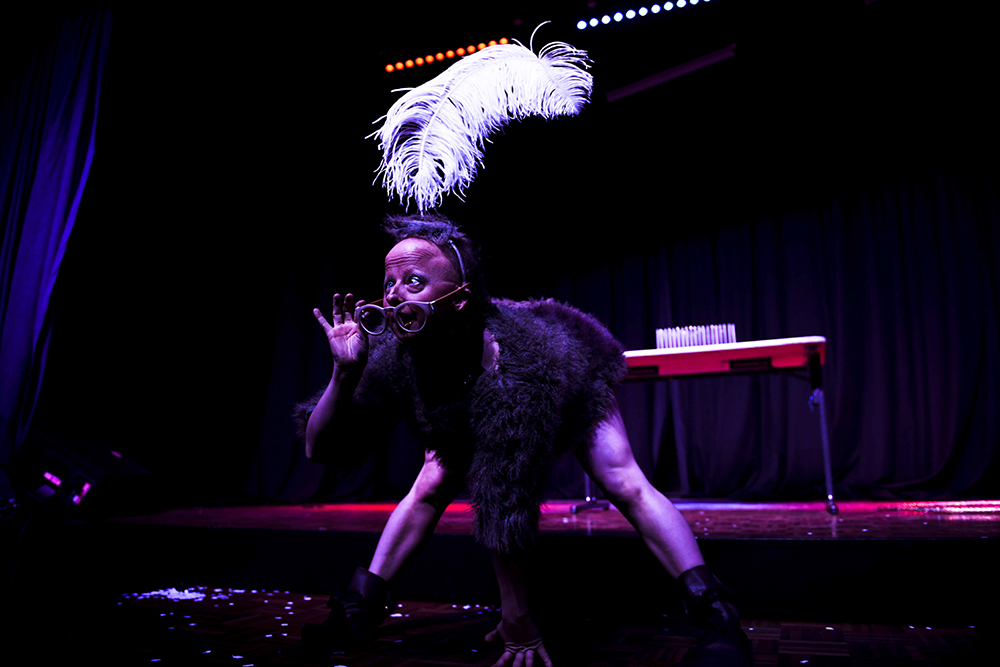 Sheba Williams from Aotearoa surprised me the most. I’ve seen her do numbers in bars—classics like Nina Simone—but never such witty repartee. She gathered from the audience a motley cast for a snap piece of community theatre. Up came three trees, the moon, various characters, one of whom had to be menstruating. Wonder Woman from our table was selected and took off in a wheelchair none of us had noticed, pretty much leaping onto the stage. (Later, outside, we saw her poster for the state elections: Liesel Tesch, ex Paralympian and local member for Labor). I can’t remember the parable exactly, something about the moon and menstruation and a love affair or reunion, all the cast throwing themselves into their roles with gusto, the trees who’d clearly been drinking by the banks of Moselle whipping about in a frenzy. Ridiculous fun.

Glitta opened the second half with the femmebot, a robot whose housework turns to horny strip-tease with a warp of the soundtrack that includes Glitta whining in Strine. It’s a tried tested and truly hilarious routine for which she wears a hot pink spotty outfit, including corset, bloomers and a sort of 1950s hair-do made from the same hot pink material. Everything comes off except the latter, the femmebot moving with jerky abandon as the primal overtakes mechanical. She was in top form, and, having seen her on Mardi Gras weekend do a show that was lacklustre, I understood at the Everglades what all the energy was being saved for. (To be fair, she did THREE shows on Mardi Gras weekend.)

When Alyssa Kitt, ranked 38 on 21st Century Burlesque Top 50, returned to treat us to another purring, athletic va-va-va-voom number, tinged with Ancient Greece, I was reminded how much of the burlesque revival can be attributed to Glitta and her peers. Down in Sydney, the taste for cabaret / burlesque has become so strong that Sydney Festival this year cobbled together a shocker of a show in one week, charged as much for it as the über-highbrow Schaubuhne / Complicité co-production Beware of Pity, and sold out the season in days.

Cabaret and circus, being lowbrow art forms, thrive on vulgarity and vulgarity is what Australia has in spades. In the 1970s, our circus culture exploded, with some companies, like Circus Oz, making explicitly political work, as though borrowing from cabaret. Our queer culture also came to the fore, the underground characterised by integration.

Combine these elements with an outdoor lifestyle and strong work ethic, and you have the perfect pot pourri. What Sydney Festival forgot is that as soon as you clean things up, you dilute them. Middle-class cabaret is an oxymoron.

When I arrived on the Central Coast, I cringed at all the bleached hair, but the same thing happened when I arrived back in Sydney from Mexico. It’s a mirror, even if your hair is dark, so you better get used to it. ‘Be the change you want’ and all that. Glitta goes right through the mirror, even nominating Benny Hill on her website. The name Naughty Noodle actually comes from one of those old British films. The key is in reinvention. Check out the photo of Glitta at the wheel of a truck in a swagman’s hat strung with tampons dipped in red glitter instead of corks. (Maybe she is less ashamed of our Anglo-colonial prudery, being of Dutch heritage, with hippy parents.)

The Naughty Noodle is another chapter in the quirky bawdy slapstick spawned on the stages of late twentieth century queerdom. Performers here won’t go as deeply into their orifices, but G strings didn’t need to come off at the Everglades. When Kilia returned to the stage in the second half she brought the house down with an improvised Missy Elliot rap: ‘Pussy don’t fail me now’ became ‘My pussy keeps falling out/it’s 6 or 7 inches long/it just keeps falling out, out, out.’ Listening to the cheers, I realised what I’d been confronted with more than anything was my city snobbism. Who cares about bleached hair? This was a bloody fantastic audience, full of energy and generosity: all I wanted was for the tables to be pushed aside and a DJ to hit the decks afterwards for some dancing. 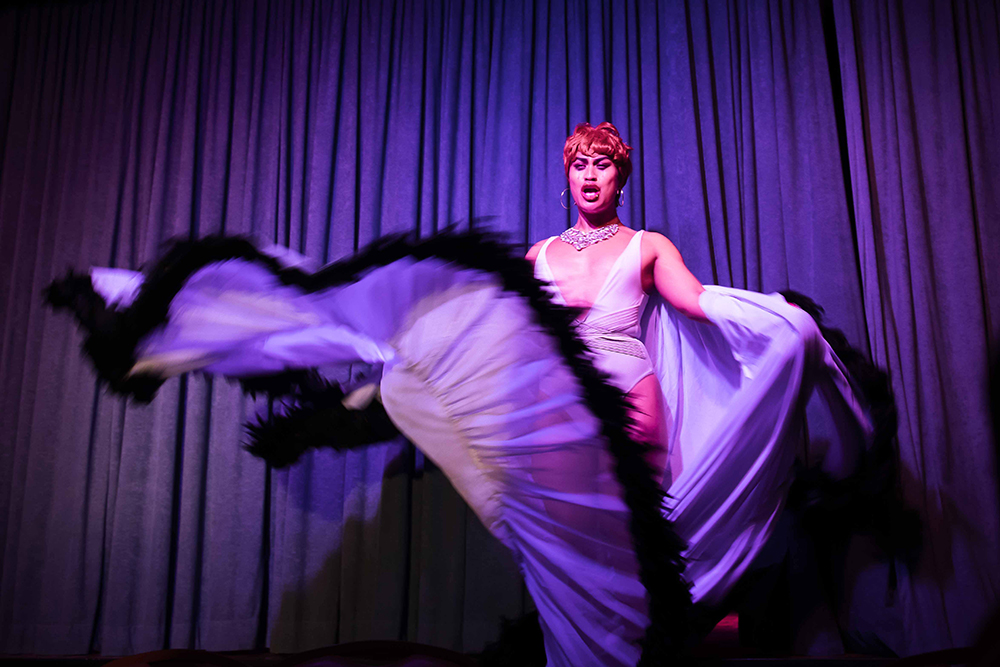 Beneath the fun and facetiousness is serious work and years of skill. Glitta mentored Corrie. The pedagogical aspects of Gurlesque, the women’s strip club that Glitta ran with Sex Intents from 2001-2011, came to mind. Just as Sex and Glitta taught a generation of women how to enjoy nudity and support each other’s liberation, so too can this club create cultural revolution away from the supposed urban vanguard.

Glitta also made Corrie’s headdress. She makes all her own costumes and props, as do most of the performers, and they are bright, articulate creations. All LGBTIQ people weather storms, but Kilia’s head is higher above the parapet than most. Beneath her glamour are the hard yards of growing up in the western suburbs as a transwoman of colour: she was assaulted in Blacktown car park a year ago, and to let it all hang out as she did was testament to her courage, as well as the good feels in the room.

Juan Lamas, Glitta’s partner, provided crisp, simple lighting and sound, and organisational grist. The show sold out quickly with people coming from as far as Coffs Harbour. The Naughty Noodle Fun Haus returns in June. Get in early: you have been warned.