A speculative review of the UTS Gallery group exhibition After Technology.

Future anxieties are too much to process. The old narratives of human beings wielding technology are now obsolete. Instead, technology directs us:  we cultivate and obsess over it; it commercialises and consumes us.

My head spins with political echo chambers and lag. I can feel every taxonomy, algorithm and sinister system poised and ready to end us all in one seamless and optimised execution.

I’m lost and formless in the void, looking backwards, and looking forwards, at how it all went wrong. If I could just reconfigure some workflows, refresh my pixels, update the interactions, perhaps I could make sense of what’s to be done after technology.

This is the moment I can crawl out of this world. Here’s my fresh start.

As a brand-new avatar of myself, I walk into a sunny glass gallery and connect to the pot-plant-powered Wi-Fi network.

The space feels safe, and I think I recognise quite a lot from memories of before. I see screens with people talking and hear the shuddering scratch of charcoal being dragged across a smooth white wall. There are familiar memories of the connections, bodies and realities I might once have lived.

I’m unsure how to proceed, so I put my hand up and wave. An explanation comes down almost immediately. This is art. The rules seem simple enough: move around but don’t bump into anything, try to inhabit the body you’ve been given.

The first thing to catch my flickering attention is a vertical screen with an unnaturally stretched hand waving. Does this screen also need help, or is it saying hello?

Akil Ahamat’s Muscular Dreams (2016) is intensely hypertextual. Multi-modal references to films, books, and social conditions, unfurl as I spend time underneath a ceiling-mounted parabolic speaker. Suspended in this locus of sound, I feel myself separated from the rest of the gallery. The distorted hand is mimicking the reality-bending climax of the 1996 film Space Jam—a film whose vertical intertextuality mashes NBA superstars and Looney Tunes characters together—exemplifying a level of frantic cultural consumption that began in the ‘90s.

Below the reaching arm, a tangible Nike Air Jordan sits pinned between a concrete lump and a black auto-pole, nodding to the near-delirious practices of cultural consumption: buy sneakers, love films, find your niche. This cultural performance informs and dictates our friendships and the connections we hold to others. We embody what we consume.1

I don’t have any selfhood in this fresh start, but through Muscular Dreams I can understand how a constructed identity of past pop culture references and future aspirations might help me find human connection. Technology facilitates and necessitates this kind of performance of self, but the commodification of bodies (and especially bodies of colour)2 in the quest for a homogenous-productive-athletic-identity makes me feel like the waving hand is reaching up for help after all.

The walls and textures of the gallery continue to generate around me. Dialogues emerge between Akil’s installation and the other artworks that confront the same question: when does online become real-life, and how do our connections to others and our own sense of self transform in this shift?

The restrictive tropes and structures of emailing seem almost silly when they’re taken off the screen and transported to this space. I read framed snippets of email conversations from Brian Fuata’s The Public Body: an email performance (2014) and dwell on how static these missives are—now made singular on paper, they disrupt the iterative nature of technology.

These prints make me wonder what might have been omitted. I feel faceless, lost and formless like before. 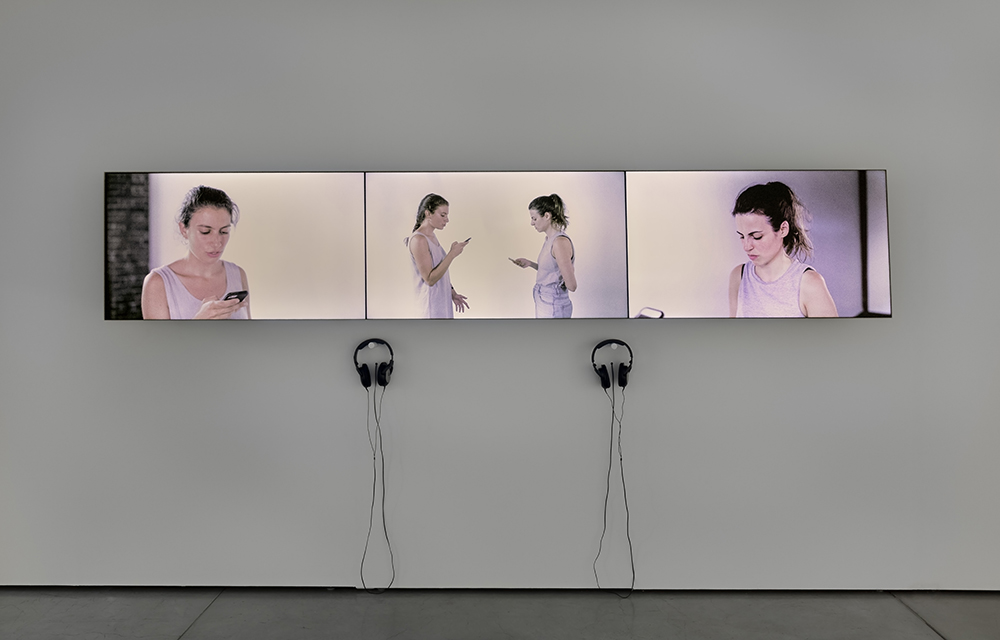 On the other hand, Roslyn Helper’s 36,000 Words Under a Gemini Moon (2019) leaves nothing out, as the same kind of transient, intimate words—this time from texts—are made foolish and embarrassing by IRL voices. Guided to the 3-channel work, with headphones nestled over my ears, I feel my own excruciating bashfulness flare: I watch Roslyn’s texts with her ex-girlfriend, Keren, (so smooth when mediated online) become real through verbal re-enactment. Not that it wasn’t real the first time.

My heart beats faster and I can see that Roslyn and Keren are not faring any better: there are the occasional sputtering false starts, nervous laughter and emotional pauses. They unpick each flippant and tender exchange in front of my eyes.

How long have I been here? How many power downs, reboots and backups have happened on the periphery of my experience in this gallery?

In many ways, technology is non-temporal and non-tangible; it compresses and stretches timeframes and leaps across geographies. A quiet second life that’s all-consuming.

In other ways, technology is intrinsically tied to its own time and reality—it often seems outdated the instant after it’s made. This nostalgia for outmoded technology is what makes Patricia Piccinini’s works so delightful. Appearing as hyper-coloured square-framed proto-Instagram snaps, the once cutting-edge techniques of digital photo editing have been used to create a strange kind of CGI, implying what to my mind looks like a pleather football.

These time stamps ground works like Piccinini’s, and indeed those by Julie Rrap and revolutionary collective VNS Matrix, in the context of a world wide web that was blossoming—presenting new possibilities, theories of the body, connections and realities for women. While the web aesthetics of the late 20th century would have online surfers believe bodies were meaningless, and anonymity reigned supreme,3 technology and its impacts will always remain inseparable from humanity.4 Technology is made by bodies, for bodies and it ultimately affects bodies. It transforms them, makes them ubiquitous or makes them redundant. It infects, poisons and kills them. 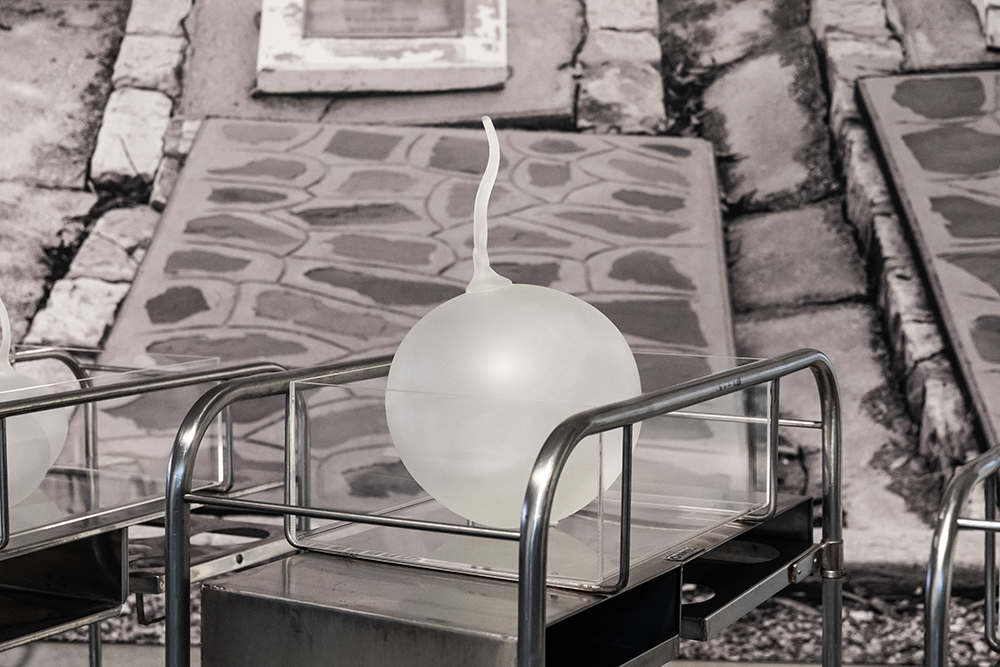 Centre-stage in this glass box gallery is Yhonnie Scarce’s Strontium-90 (Fallout Babies) (2016). Born in Woomera, South Australia, and belonging to the Kokatha and Nukunu peoples, Yhonnie displays the effects of British nuclear testing carried out between 1956 and 1963 in the Maralinga area. The nuclear fallout from these tests left air, land, and food, contaminated with fatal radioactive materials—affecting infants and children especially. Blown glass in the form of native plums resemble embryonic bodies inert in neonatal cribs before a wall-sized archival photo of children’s graves in Woomera Cemetery.

This is the devastating impact of technology. This is the inescapable reality of the so-called progress of colonial narratives, a reality that overpowers any nostalgia or fondness for a time when humans were pushing the boundaries of invention.5

I have looked backwards and looked forward at how it all happened. My fresh start in this world, while inescapable from technology, has felt organic and revitalising. With my two feet planted, I can begin to feel myself again, gazing up towards Grant Stevens’ The Mountain (2018).

Transfixed by the play of light and shadow on its detailed faces, I believe I have never seen a mountain until this moment. I have only ever experienced sublime nature through the pixels of shared, modified and transposed images, and this work captures that hyperreality with its eerie AI-aesthetic snow-capped peak.6

This pristine 3D entity rotates, bathed in its own algorithmically-generated cycles: day becomes night; the patterns of the weather shift and change.

Despite its twenty-minute cycle, time feels completely beyond human-scale, and more cosmological in scope when I am staring at The Mountain. It is indeed calming to know that this moment, or even the entire invention, and subsequent obsolescence of smartphones, might be considered the blink of an eye for a mountain.

I am only an avatar of myself rendered in an alternate but overlapping reality. However, surrounded by technology, my existence is something I can examine through these works. My connections to others, to body and to reality are represented and reflected back at me. There are countless moments and touches in this space that feel sincere and connected to humanity.

And while I could never reach out and grasp the intangible, timeless, un-reality of technology, the divides that hindered my connectedness now somehow seem less extreme, knowing that these anxieties are shared and human.