This text is in dialogue with the exhibition Session Vessels at Airspace Gallery, and is the next instalment in RD’s feature series of paratextual responses. Organised by Rafaela Pandolfini and Ainslie Templeton, Session Vessels featured the work of twenty artists and collectives from Australia and the US.

I planted a wattle tree in our front yard in November 2015. In the past two and a half years it has grown into a tall shrub, and this year it has flowered for the first time. It left me a postcard at the end of a branch to say thank you: a bundle of sap that had formed the smallest crystal. I am now looking at a pair of runners that are covered in what looks like crystallised snow. The runners remind me of the type I used to wear to netball training in 2004. I look at the runners, and the snow that has come with them into the gallery, and think about how things can harden into crystals, like snow and sap—how things are liquids and gases and then solids, and sometimes they are all of those things before deciding which one they would like to be. 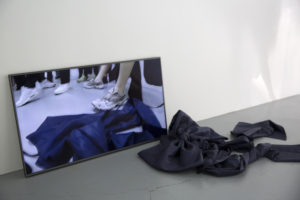 Megan Hanson, ‘…it loves without condition or discrimination, but only once the material labour of its construction has been dismissed’ (2018)
Video performance, bodies, GoPro, blue taffeta bow, a look, .mov file, HDMI cables, screen
Image Credit: Rafaela Pandolfini

Verity (friend, housemate) has decided that she wants to be a costume designer, stylist and artist. We talk about the runners that are covered in snow and think about why we find them interesting. Maybe it is because we never see clothing that has snow on it in Sydney. This winter is warm; the country in drought. Maybe it is because clothing is usually pressed and ironed and squeaky rather than messy and icy and dirty. Seeing snow on a shoe is like seeing a soup stain on a shirt, or a safety pin on someone’s coat where a button is meant to be. The faults remind us that these things are meant to work and look a certain way. Verity tells me that the runners are covered in crystallised sweat rather than crystallised snow.

Verity says that the sweat is interesting because it has been put onto the shoes as if it were something ornamental. Yes, I say, it is celebrating sweat rather than hiding it. We sweat when we are hot, stressed, busy, tense, dancing. The whole room is filled with plastic bodies wearing yellow, silver, pink, tassles, chains, buttons, checkers, bows, lycra. The garments are playful and strange and remind me of dressing up in wild clothes as a teenager to take attention away from my changing body. Garments allow us to live inside our bodies in different ways. They allow us to live inside them the way we want to.

On the mannequins these garments look like they are waiting, or like they are asking me to put them on and run away. The gallery is very shiny and empty, I wonder if anyone would notice.

If I were to wear one, I would like to wear the dress in the back of the gallery that looks like bougainvillea flowers have grown over a body. The costume makes me want to fall asleep inside of it, and the sneakers with the snow/sweat make me want to run.

I am reminded of the ballet shoes in The Red Shoes (1948) that wouldn’t stop dancing, and I wonder if these artworks will start moving or talking to one another when I go into the next gallery.

In one of the spaces downstairs, there is a screening room playing ‘Variety’ (1983), a film written by Kathy Acker. Acker, Chris Kraus, Eileen Myles, and my mum all lived in New York in the 80s, and all carry a toughness and tenderness with them that I find hard to separate from this period of feminism. There is a list in the other gallery called ‘A Minor History of the Feminine’ written by Rafaela Pandolfini, who is a co-curator and artist in the show. I read the list and carry certain phrases with me throughout the galleries, as if a song is stuck in my head. I can hear the distant sounds of ‘Love, Emily’ (1987), an audio piece by Acker, playing as I walk between the galleries. I can’t make out the audio, but the muffled sounds are comforting: it is almost as if Acker is sitting in the other room on a phone call, and I am walking around her apartment picking up her mugs and books. 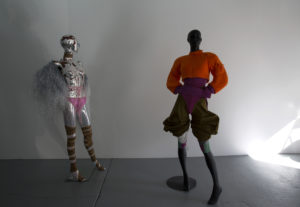 On the day before I saw Session Vessels, I was at my nana’s funeral. We had chosen to have her wake at Tilley’s, a longstanding feminist and queer bar in Canberra, which has only hired women since it opened. We chose to have it there because my nana had been a regular at Tilley’s in the 1980s, and had gone there with her girlfriend and friends. I sat with one of these friends, who told me that my nana had been a part of a sit-in at a male only bar. Until the sit-in, women had been unable to go to a bar and order a drink unless they were there with a man. My nana and her friends could have been arrested, but eventually they were given the right to drink alone. I think of tension making sweat in a body, and cold drinks cooling the body down. I think of my nana, and how we all brought our own version of her with us and left with each other’s. I can’t help but think of her feminism as I walk through the gallery. I think of Rafaela’s list and note No. 3: ‘Older women and unconditional love.’

I watch ‘Variety’ for about twenty minutes. It is about a woman who is obsessed with watching porn. The film is grimy, with lots of pencil eyeliner, take-out food, taxi rides and soft red lighting. I watch a scene where a man is playing pinball while the main character describes a sex scene to him in detail. As the scene goes on, the man begins to sweat and is getting progressively worse at pinball. At one point he says, ‘Why are you doing this to me?’ I wonder if he says this because he is turned on or if it is purely because a woman is talking about sex. I remember No. 7 which says, ‘Feeling unable and a few aggressive men.’

The tension in the scene reminds me of the tension that has crystallised on the end of the runners. The sweat in the crystals, and the sweat on his forehead, tell me that feminism is tense and sweaty, like dancing and fighting. I leave with the sound of Kathy Acker’s voice, and a small crystal of sweat forming on the end of my shoe.