This is the second article in a series produced in partnership with Sweatshop: Western Sydney Literacy Movement and Diversity Arts Australia, as part of the StoryCasters Project.

The Terra inFirma program was originally intended to take place in three parts over 2020. It has been delayed due to Covid-19, and will now extend into 2021.

This year marks 250 years since James Cook invaded Australia and stole Indigenous land with two words: Terra Nullius. In 1770, Australia was declared nobody’s land—although it was very clear there were between 300,000 to 1,000,000 Indigenous peoples who had been custodians of this land since time immemorial. The British colonisers had seen and interacted with the Gweagal people when they unlawfully entered Dharawal Country, yet violently denied their existence. Britain’s invasion of this land marked the commencement of a history of genocide, cultural erasure and dispossession under the duress of an ongoing colonialism that white Australia continues to deny.

Terra inFirma at the Leo Kelly Blacktown Arts Centre was the first arts program I’d seen, as a member of the Australian-Lebanese community, that exclusively shared the responses of First Nations people to British colonisation in the South Pacific. It was to be—before COVID-19—a year-long program of performances, workshops and curated art exhibitions running from early March, featuring works by Aboriginal, Māori, Polynesian, Javanese, Pakistani and Fijian-Indian artists.

Terra inFirma’s opening night was confronting in its revelations about Australia’s wider cultural history. I stepped into an expansive dimmed hall with a gabled ceiling and exposed black rafters that divided the lateral walls into thirds, each section dedicated to the works of a single artist. To my right, golden wallpapering with text introduced the exhibition, the artists and the purpose of the program. The title ‘Terra inFirma’, with an italicised prefix, was capitalised in red and its Latin origin explained in the text. 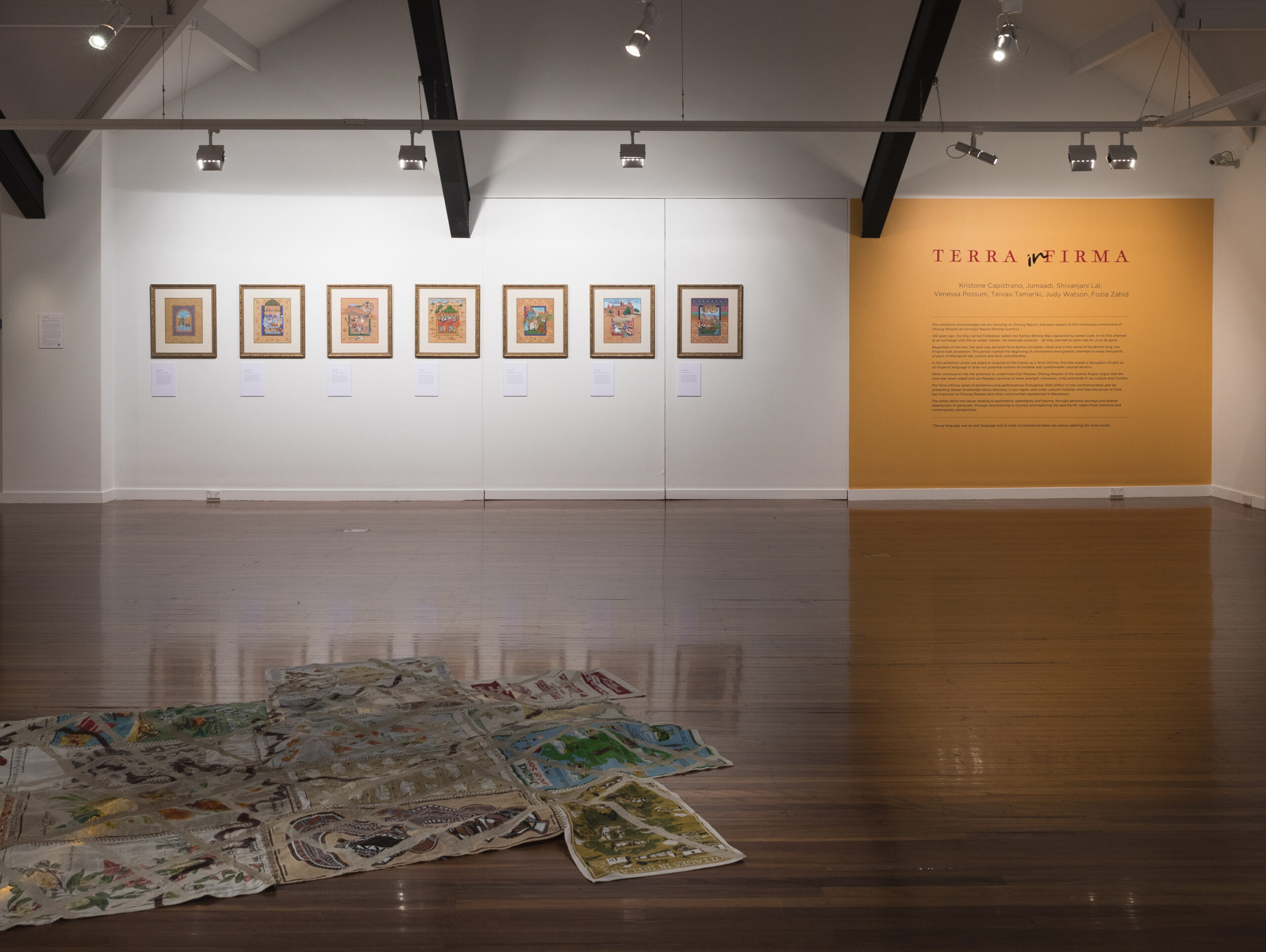 I knew ‘terra’ from Terra Nullius to mean ‘land’, but Terra inFirma was new to me. So, I did as any Latin-illiterate Arab millennial from Western Sydney would do: I Googled it. In Latin, ‘terra firma’ translates to ‘solid earth’ or ‘firm land’ and thus ‘infirma’ indicates destabilisation and displacement. The insertion of the prefix not only subverts Latin as an imperial language, but also symbolises the disruption of the ‘firm’ and established communities predating British invasion. The italicised prefix encroaches on the word just as Cook encroached on Indigenous Country. A fitting title.

Terra inFirma’s artworks are distributed between the hall and a smaller adjacent room, and these include works by First Nations artists from around the globe, inviting discussion about the stories of colonial trauma, cultural history, rediscovery of Country and sovereignty. Engrossed in the same eerie silence as those around me, I walked from one corner of the hall to the other, studying the miniature and large-scale paintings, charcoal drawings, and immersing myself in the video installations by donning the attached headphones.

Fozia Zahid’s miniature watercolour and gouache paintings depict the British invasion of the Indian subcontinent and Tipu Sultan’s death during the resistance using imagery of violence, battle and bloodshed. Although not directly linked to Australia’s Indigenous history, the artwork shares themes of loss and trauma common to those who experienced colonisation in all its devastating forms. Teivao Tamariki depicts life before the forced removal of Polynesians by colonial settlers. He recreates traditional navigation systems by working with the properties of the space: navigation by ocean currents is illustrated using cyclical vinyl cut-outs with cultural patterning, and navigation by bird migration is represented using wooden models of birds scattered near the ceiling of the adjacent wall.

These were accounts of history and pre-colonial ways of life I’d never heard of, from perspectives I’d never been exposed to, which challenged the dominant historical narrative I now know to be infused with a white saviour complex. The artists of Terra inFirma uncover the truth: I had only ever heard one side of the story, and it felt wrong that it was the experiences of the colonisers rather than First Nations people and the custodians of the land themselves. Here, First Nations people reclaim control of their narratives and the ways in which they are being presented. 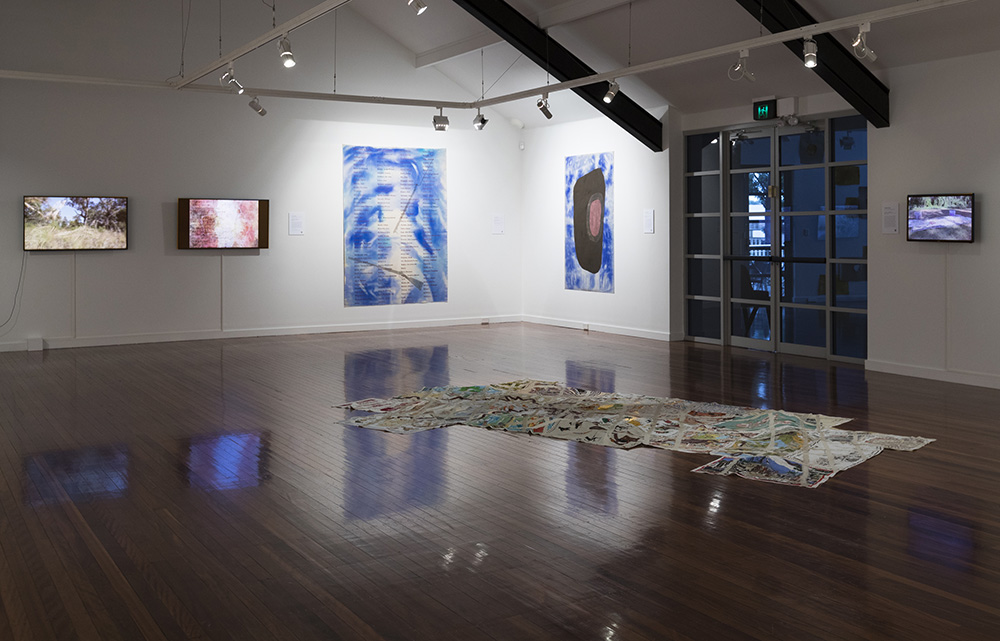 This was most powerfully captured by Waanyi artist Judy Watson. Watson’s work is unmatched in its ability to catalyse within me a process of critique and questioning. It confronted me with the truth, rather than the colonial lies I was made to believe as fact. Watson uses a mix of painting and video to reflect on the genocides of Indigenous Australians committed through white-supremacist policies that enabled mass murder over a period of 140 years. Her single-channel HD video, ‘the names of places’ (2015), lists massacre sites in an ascending reel like credits after a movie, with a transitioning backdrop of various maps of Australia to highlight the connection between memory and place. The fluid, repetitive motion of the credits is hypnotic, and continues for twenty-one uninterrupted minutes.

I watched, entranced as the list went on and on, wondering whether any region of Australia had been free of bloodshed. I felt the chills climbing up my body as each minute went by, like how the credits climbed up the screen. There are easily hundreds of sites named, with thousands of lives lost. The extent of the loss is a terrifying reality, and the haunting music a testimony to its lingering effect on both the community and the land on which it occurred. Watson’s use of vein-like lines that transition to darker, redder shading that seeps inwards from the margins of the screen to the epicentre of the map, is symbolic of the genocidal bloodshed and the penetrative depth of generational trauma. A reminder of struggles endured and survived.

The descriptive plaque next to the video screen provides a link to a website that will update the names of massacre sites for public access. How could there possibly be more? I had never heard of massacres or genocides in relation to Indigenous Australians.

The colonial history I was taught was in keeping with a Eurocentric curriculum, and I could not recall a moment during a history lesson where there was a commemoration, or recognition, of Indigenous lives lost on this land in a way there was for non-Indigenous Australians who fought outside it.

The most jarring part of this experience was how it confirmed the extent of my privilege, and the ignorance that came with it. My parents had fled Lebanon’s Civil War but there remained a continuity of our people and preservation of our culture in Western Sydney—I was never forced to hide it, eradicate it, substitute it or feel a threat associated with its identity. I was surrounded by a large Lebanese diaspora and other ethnic minorities within this diverse community. There was a Lebanese restaurant, store or bakery around almost every corner; a heavy demand for tabouli, belly dancing lessons or manoush at work by colleagues; the Arabic language classes and dabke workshops I’d attend often had more non-Arab attendees than Arabs. In Western Sydney I felt accepted and free to express my cultural identity.

Indigenous Australians have been denied this right and privilege for centuries in their own Country, whose sovereignty they never ceded. Although European powers colonised my own country for twenty-three years, the process mostly involved non-violent sectarian division within the political system rather than the traumatic genocide or cultural erasure experienced by Indigenous Australians. Watson’s work confirms my understanding of Australian history was incomplete, superficial and colonial. It was shameful this was the only lens I had ever known. 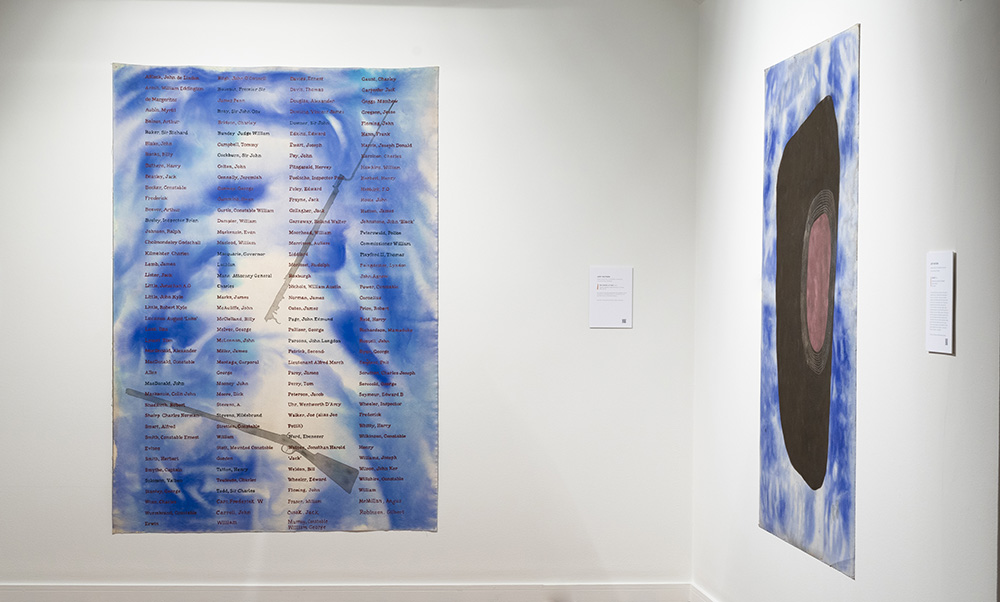 Watson’s second work, a painting titled ‘the names of men’ (2017), lists perpetrators of these Aboriginal massacres from the late 18th century to the 20th century in graphite, chalk and acrylic on canvas. Like her first work, Watson’s use of lowercase in the title represents an intentional deviation from grammatical convention. The names are bolded in red and black, two colours of the Aboriginal flag, and run down the canvas in four columns. Behind them are the shadows of two rifles, linking the names to their crimes and recognising acts of genocide that have been long-denied but never forgotten.

Her single-channel video ‘witness tree’ (2018), walks through a massacre site in Brisbane. The camera fixates on a tree for several minutes using low angles, reminding me of nature’s omnipotence. It has seen death on unceded land and remembers it, as do the custodians of the land, even if the pages of Australian history do not. Two white strips of fabric bandage the tree, symbolic of white Australia’s superficial attempt to ‘cover up’ the past events forever marked in its memory by omitting them from colonial history. Watson challenges historical narratives by presenting colonisation as an act of transgression rather than one of glorified discovery, and condemns the celebrated ‘legacy’ of European expansionism.

As a colonial-settler on stolen land, all that I have known is a white-washed Australian history that is incomplete and continues a tradition of ongoing denial. Terra inFirma uncovered the stories of loss and trauma I had never heard, and, in bringing First Nations voices to the fore, reinforced gaps in my knowledge I never knew existed. These are the stories omitted and invalidated from the colonial histories I had been taught in class and in textbooks. As colonial-settlers, we must question the colonial narrative presented to us and actively learn about Indigenous history from Indigenous people. Theirs are stories that must be shared. It is the only way for us to break the white-supremacist colonial gaze that grips us all.