we are the crowd
we’re c-coming out
got my flash on, it’s true
need that picture of you
it’s so magical
we’d be so fantastical

In six short lines, Lady Gaga’s Paparazzi distils many generations of flirtation with photography. Touching on notions of technological mediation, visibility, and the lens’ relationship with desire, the late 2000s dance track cleverly navigates photography’s playfulness and enduring allure. These ideas resurface once more to guide the latest exhibition of photography at the Art Gallery of New South Wales.

Today, photographs clutter drawers and devices, their susceptibility to manipulation betraying our trust, and their foundational processes proving too clunky and environmentally-taxing for most. We are rapidly veering towards a point of crisis with the photographic medium. Shadow catchers is thus a timely offering from the Art Gallery of New South Wales and their Contemporary Collection Project series. Senior Curator of Contemporary Australian Art Isobel Parker Philip, formerly a curator of photography, draws from the museum’s (expanded) photomedia collections for the hang. As if one and the same, gelatin silver prints are positioned alongside inkjet, sculpture, moving image and painting. The spaces of the exhibition bring together numerous historic and photographic tangents to productive ends; their diversity reveals the slipperiness of the medium and the ease with which it defies any singular characterisation.

This show is carried by a central paradox—photography’s claim to be both something and the shadow that it casts. When looking at a photographic portrait, what is it that we see? Somehow both the subject and an image. Our capacity to render still otherwise fugitive shadows was once a testament to the magic of photography and is a seduction named in Gaga’s opening verse. Shadow catchers revives this to bewitch distractible audiences, often exhausted by their daily inundation of fast images. There is a palpable slowness to the exhibition that champions contemplation. 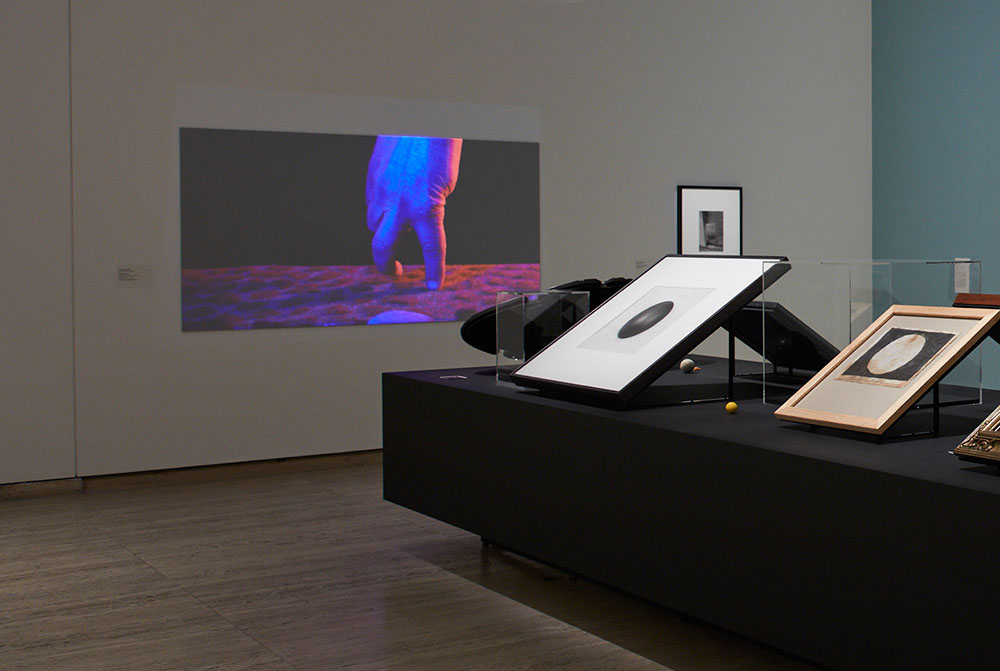 shadow is burnt
yellow dance and we turn
my lashes are dry
purple teardrops I cry, it don’t have a price

More than seventy works, made between the 1860s and now, are threaded by Parker Philip, not so much according to material similarities, but rather thematically, employing frameworks like mirrors, doubles and shadows to do so. Audiences encounter these as tightly clustered surveys, signposted by textual material. These concepts have long been affixed to the camera’s enjoyment, but are equally complicit in the deceit of images. They seem to concurrently justify and obscure a photograph’s truth claim by verifying optically what is impossible spatially. Like a Trojan horse, the facticity we expect of the camera often allows its products to go unchecked. Paparazzi qualifies this toward its end by calling out the photographic process for its plasticity, its made-ness—conditions that speak particularly to Ilse Bing’s 1931 ‘Self-portrait with Leica.’

Featured in the exhibition, the modest gelatin silver print contains several perspectival riddles. The artist, who is herself the subject, peers out through a mirror at which her camera and gaze are directed. This doubling is repeated in a second, angled mirror on the frame’s left, unveiling Bing’s tactic in profile. Confronting simultaneously her audience and own stare, the artist also looks away, commanding every aspect of the image and imaging. But where is she? To declare that the nearer reflection, in an irrefutably flat object, is more real than the distant one feels tenuous at best. Although confirmed at least three times, the artist’s having-been-there remains difficult to locate almost a century later.

Arguably, it is even more difficult to locate this presence today, as the vocabulary of tabloid imagery dumbs our ability to look with persistence into photographs. Many images are chosen for their coherence, and the speed with which they convey a prescribed one-liner. Decoding Bing’s work instead relies on an antique visual literacy, now superseded by spectacularised modes. This is the difference between looking and seeing—where the former can be achieved at a glance, the latter is a more intentional gesture that reaches cognition. The act of seeing rewards the studious visitor and is indicative of the exhibition’s unhurried pace.

don’t stop
for anyone
we’re plastic but we still have fun!

The gallery’s walls recall the zoning method that American photographers Ansel Adams and Fred Archer developed to ensure consistent and fully-realised black and white exposures. With vertical swatches of chalky blue, their pigmentation makes the prolonged viewing of black and white objects easier, offering our eyes respite from stark sight lines. Over eighty years ago, Adams and Archer found they could control contrast in their photographs by dissecting them visually into zones, each categorising a shade of grey that should constitute a black and white landscape. Nine shades were selected and positioned along a scale, bookended on the left by deep black, and on the right by crisp white. Initially weighted and bold, the guide whittles away over ten gradations. A photographic print informed by this scale can be considered academically correct—impressive, but not essential.

In fact, it is the distance created between the rigidity of this doctrine—an awkward loitering of photography’s patriarchy—and the incorrectness of the more experimental works displayed in the exhibition that is so compelling. One of these is Debra Phillips’ ‘Untitled (Constant #2b)’ from 2017. The photograph nods to the artist’s ongoing interest in systems of classification, the ways in which they are made, and their fallibility thereafter. The work looks carefully at the kilogram, the last remaining unit of measurement to be dictated by a physical object. Housed in the International Bureau of Weights and Measures in Paris, a cylinder of two chemical elements acted as the global benchmark for this mass until 2019, despite the fact that its definition and weight was constantly changing. An alternative object is currently being developed in pure silicon (a much more stable element) so that its atoms can be precisely counted and this data computerised. Phillips translated digital renderings from this process to analogue film, allowing the manufacture of her hypnotic gelatin silver print. While the result is simply a flattened vision of the proposed sphere, ‘Untitled (Constant #2b)’ encourages its viewer to think about the widespread redundancy of material archives. 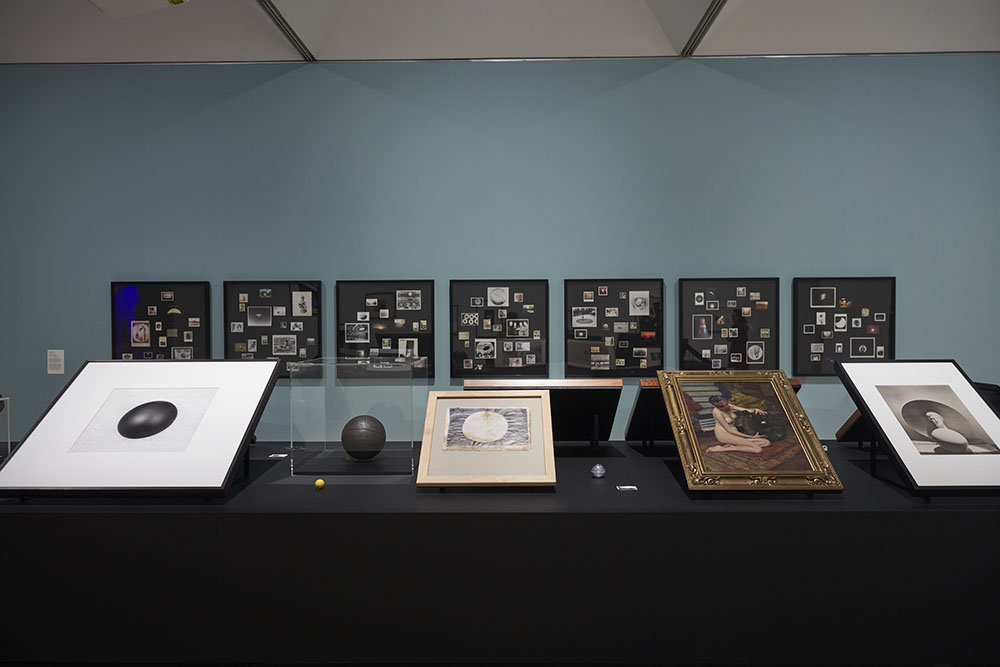 Mined for their data and inevitably replaced, these objects of measurement share a fate similar to the hands-on processes of Phillips’ image-making. This photograph is affixed to a central table in the gallery, among a thoughtful scattering of like objects. Reminiscent of the mantelpiece of a family home, the table’s cluttered surface brims with connections. Accompanying Phillips’ work is a bronze basketball by Jeff Koons, one of Robert MacPherson’s naïve drawings, and ‘Sphere I’ (1989), a humble Gerhard Richter sculpture. Essentially balls of all kinds, this formal accumulation renders otherwise-incongruent items strangely cohesive. The viewer is encouraged to look beyond simple material dichotomies, and instead to affective semblance—what the artworks do that is similar. In this way, Shadow catchers expands our understanding of the photographic to encompass aesthetics and ideas unfamiliar to a camera’s lens.

baby, you’ll be famous
chase you down until you love me
papa-paparazzi

It cannot go unsaid that Shadow catchers pulls photography’s display and rhetoric from the dank corridors of Australian museums to which their collections have been relegated. Too often it seems as though institutions think the medium needs a supplement, a drawcard, a cause. When a photographic blockbuster does occasionally come around, the artwork itself is often positioned as consequential of something else—namely politics, history or celebrity. Of course, this is symptomatic of the camera’s assumed ties to mimesis and referents, the things that photographs are of. That said, it can also be attributed to the larger cultural complacency, wherein photography is penalised for its own unwavering complexity.

The Art Gallery of New South Wales show generously revisits and reframes an incredible archive of photomedia. On its walls and in the accompanying catalogue, Shadow catchers amplifies the value of these enduring pieces by supporting them to again excite and unsettle their viewers. Evident is the time and care taken to substantiate what is an incisive exhibition, one that deserves your engagement.

Shadow Catchers is currently closed to the public due to Covid-19. You can view the collection works in the exhibition online via the Art Gallery of New South Wales’ website.