‘I am fascinated by dualisms, mirror images, blindness and invisibility, subject/object reversals, the roles of artist and audience and all my work, since my earliest performances of the 1970s exacerbates such tensions, as the deeper structure of both thought and image.’
Mike Parr, (January 1998)

Entering the space, you see a large rectangular installation referencing the Anna Schwartz Gallery (ASG) that occupied this end of Carriageworks for years. No roof, three walls, a video playing high on one, its soundtrack—glasses chinking and people chatting—filling the space. The buttresses of the outer walls are exposed. This white cube within a white cube is ‘Built Replica of Anna Schwartz Gallery, Melbourne’ (2019). In the narrow corridor formed beyond, is the first of Mike Parr’s performance series ‘Towards an Amazonian Black Square’ (2019).

The artist is painting black squares onto the white wall. His eyes are squeezed shut. He is attended by four men. One of them, Glenn Thompson, is listed as a co-performer because he is so frequently in shot. But Gotaro Uematsu is the most significant other, handling the video feed with the deftness and sensitivity that only a decade of collaboration can bring.

The squares are proportionate to how far Parr can reach with his right arm, that is to say about a metre and a half. When I arrive at 4.30, he has done about six. Sometimes he mounts a ladder, moved by Glenn, alternating between high and low squares. The brush is tucked beneath his left stump as he places the flat of his right hand on the wall and pauses to get his bearings, head bowed, grimacing with concentration.

Back in the white cube installation, the monitor is mounted so high it’s impossible to see front on. On it plays documentation of ‘LEFT FIELD (for Robert Hunter)’, a performance that took place at ASG in Melbourne in 2017. In a homage to the Australian minimalist who worked in geometric white-on-white, Parr painted sections of ASG’s walls white during the two hour opening. When people arrive for tonight’s opening, the soundtrack will mingle with actuality. 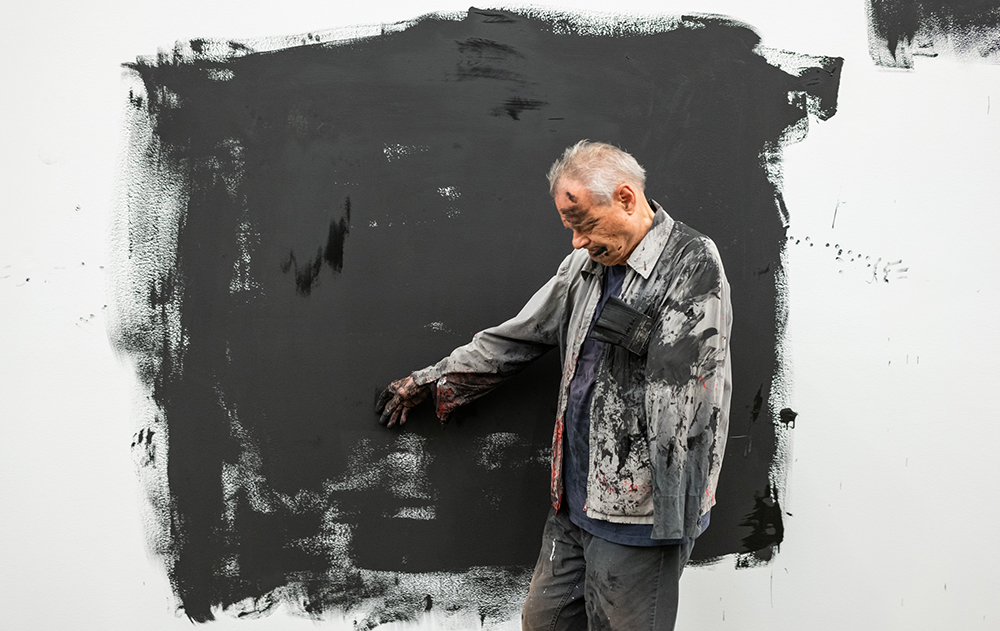 On the other side of the white cube installation, two monitors play a live feed of Mike painting. Above them, Malevich’s Black Square (1913) is invoked, again mounted so high you have to crane your neck to read it, the plaque diagonal as though warped by heat.

Initially, I recoil from the Malevichian square. (Oh no, I don’t understand, I dropped out of uni I didn’t go to art school, impostor impostor!). But in its very blankness lies so much. It is the order placed onto chaos, implicit in Malevich’s initial rendering in the build up to WW1. Its muteness can be read as protest, or complicity. For many, it is the beginning of formalist art’s abnegation of responsibility. And, of course, it is one of Parr’s enduring tropes, for all these reasons as well as the simple fact that his lineage is predominantly European. It is, in this context, burnt earth: carbon, carbon, more and more carbon, deadly when dominant.

It is worth noting that thirty years ago Parr made a collaborative work, ‘But Now I Would Lie to Speak as an Artist’ (1989), protesting the logging of forests near Eden for woodchips. Much of today’s discourse around climate change is so panicked it forgets how long environmental degradation has been problematic (some point back centuries to the industrial revolution, and to colonisation; alarms have been sounded for decades, but most world leaders haven’t listened.) The corollary of this is amnesia around artworks made in response. One of the other artists in ‘But Now I Would Like’ was Janet Laurence, whose work with trees most recently featured at the MCA and AGNSW, and extends back to at least the 1970s. Twelve artists, including Laurence and Parr, knelt in a row and buried their heads in the ground while John Coburn read out a statement by Albert Tucker. An arresting photo of the gesture made the cover of Artlink. But whereas Laurence may be motivated mostly by the feelings of trees, Mike is probably more motivated by his own feelings, even if refracted through the Reichian concept of personal psychology as the portal to social psychosis, and the fascist state. 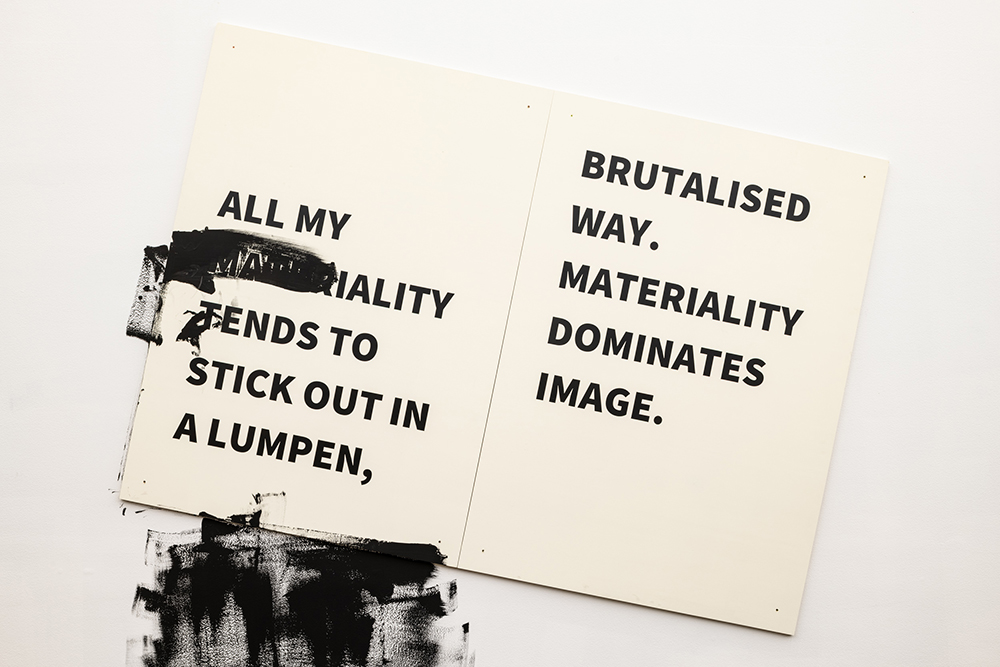 Mike’s black fingerprints speckle the wall from where he has touched the squares to assess their perimeters, and the thickness of paint. The wall completed, eyes still squeezed shut, brush clamped beneath his stump, he feels his way up to the quasi-foyer at the end of the space. On the walls here are monitors playing a live feed, one high, the other at head height.

In the space adjacent, a table is being laid with glasses, bottles of red, a giant wheel of parmesan and breadsticks. Almost two hours have passed, and the rare quietude of pre-opening is breaking. Mike has always been in the performance art camp that repudiates theatre for its representationalism. Yet the installation is a form of representation. And his fumbling as patrons arrive has a whiff of theatre.

Everything has been planned: it is highly aesthetic. The charcoal grey smock and black trousers; the choice to leave his eyes uncovered so blindness is conveyed not by a covering but, conversely, a revelation of his effort; the way this also emphasises the amount of black paint that has ended up on his face, right across his eyes (ouch).

He knows more or less where he is; I sense he has chosen to come up this end of the space to greet people. To remind us he is performing (in case we thought it was just about the fancy cheese and wine). The shy exhibitionist, the gregarious introvert. Sorry I didn’t say hallo, I was run off my feet. It’s moments like this that I feel a surge of warmth, hilarity even, and Parr does have a great sense of humour, and a feel for the absurd. For all his claims to hate ‘the art world’, it’s a variegated thing, much of it supportive and loving of him.

When he stumbles further into the space where the victuals are laid, he quickly retreats. Prangs into a doorway. Reorients. Then gropes his way back to the end space.
Parr painted from 3-9.30pm, long after the opening was over. He had a bit of water, but no break.

Returning to the space a week later, I see the three walls that surround the installation are covered in this sequence of black squares, one up one down. In the end space, on a white chair, is an empty tin of black paint, the congealed brush laid on top. The monitors that were playing a live feed now play trace videos. They have all been reversed, so Mike appears to be painting with his left arm, the entire space facing the opposite direction. It is at once serene and disturbing.

Dominating the soundtracks are the clacking of the ladder being moved, the swish of the paint brush. The sounds of the artist’s labour, repetitive and banal.

I think of the labyrinth, another Parr trope, dating back to ‘Father’ (1996). More recently, ‘On Manus Island’ (2016) at Campbelltown Arts Centre. Except here, the maze has been bombed, the white cube installation its crater, its empty centre. 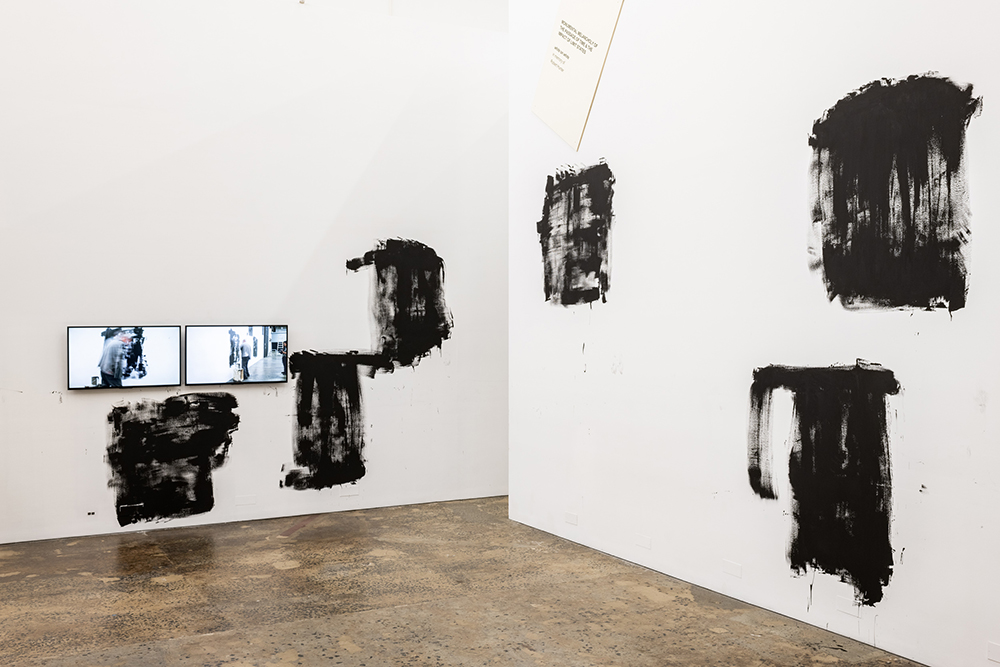 You have to visit the attendant installation two bays down, and watch the video documentation of ‘BDH (Burning Down the House)’, the 2016 Biennale performance in which Parr set fire to an 18 x 12 metre grid of his self-portrait prints, worth approximately $750,000. The floor to ceiling screen makes it an immersive delight. Filmed from above, this document shows more than what was apparent in real time: a Malevichian square forming as the prints burn down to ash, dissolving the grid.

The scorched earth of mining. Without art, there is no civilisation. The endgame of Parr’s painting out series. An artist in his final years, drilling down to essence. A sort of self-abnegation, showing again Parr’s ambivalence about the huge prices his prints fetch in that loathsome art market, without which he would not have the funds to create (and destroy) these grand, imperative performances.