Communicating with ghosts is simple in theory.

Dying is like stepping off a tarmac and on to foreign soil, my parents said in Mandarin. You’ll be severed from your bed, the grocery shops you know best, the people you love—no landmark in sight, save the cloudy bulk of winter sky. But you’re never unreachable.

As a child, I went through the motions. I washed apples for my forebears, chopping them into little pieces so grandfather’s yellowed teeth could chew them with ease. I lit the incense at the little shrine in our living room, watching smoke seep into Ma’s perm as she lowered her head and whinged about her day. Give me strength, she beseeched, to stop throwing rocks at the white devil who keeps spray-painting penises onto our fence.

During these intimate swatches of conversation, I learnt about a man I’d never met. About the way he chewed sunflower seeds after smoking his pipe; how much he loved Sudoku puzzles; the time he beat my aunt with a back-scratcher because she pinched his matches. In these small moments, he became so present, I felt the imprint of his gnarled hand around my shoulder.

(Thank you for our good health, our home, Ma prayed, thank you for blessing our daughters with Band Sixes in NAPLAN English. Duō xiè, Duō xiè.)

I wondered: why did we never ask him whether it was too hot or too cold on the other side? Did he miss earthly things, like jasmine tea and mah-jong? But, as it was impossible for him to respond in words, all he could do was grant us endless blessings and linger in the small nooks of our lives, undetectable.

Deep down, I knew he wanted to talk to me, to know me—but the connection was faulty. He had died in Burma. His physical body was buried oceans away, his spiritual one residing on another plane entirely. Maybe that’s why he couldn’t talk back: we had left him behind, in every possible sense. 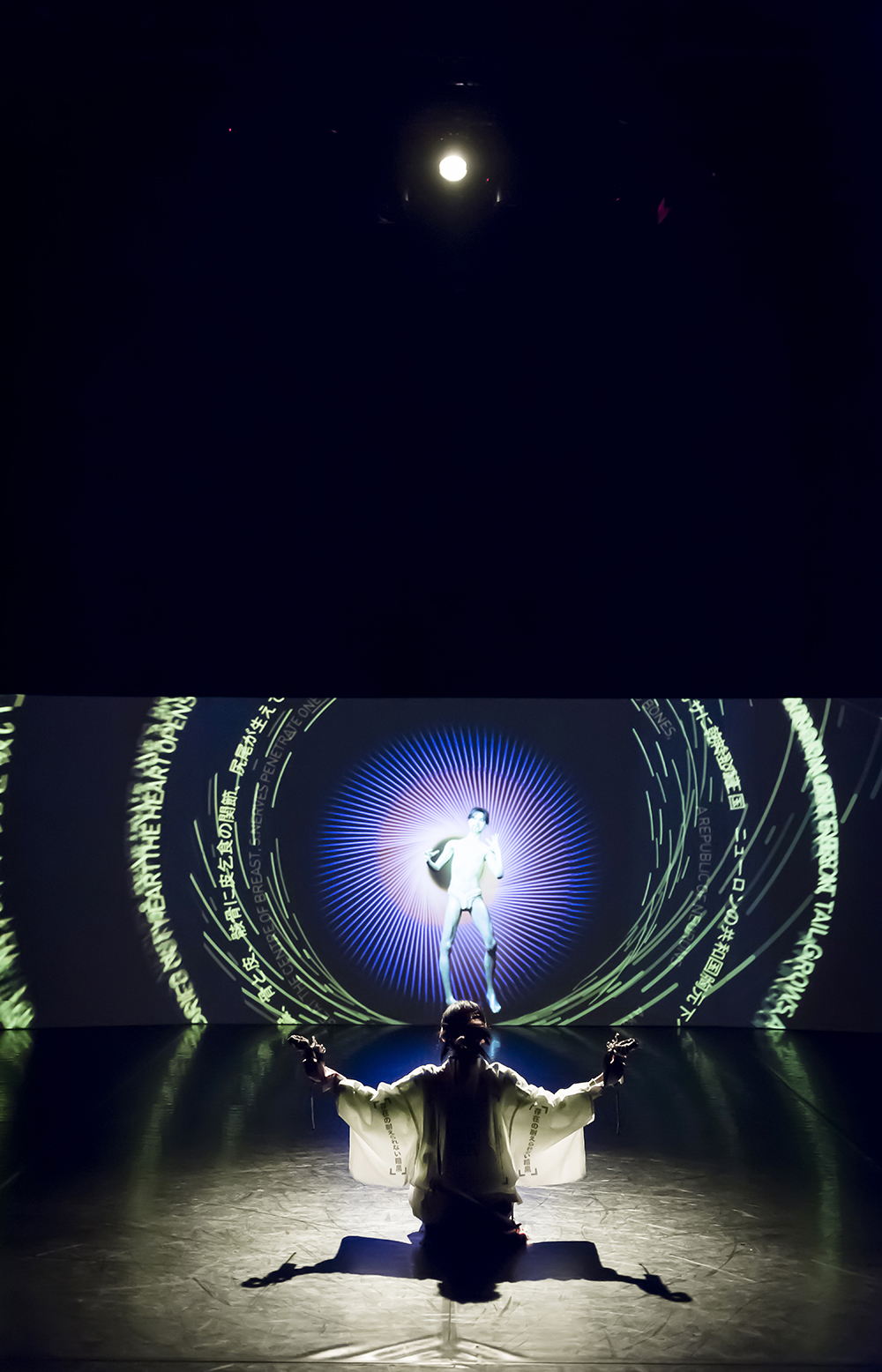 At the far boundary of Canley Vale Public School was an old eucalypt we called ‘The Everywhere Tree.’ Allegedly, it had caught fire once in the 19th century. Now, sooty black tendrils perpetually curled across its length—reaching, reaching.

The primary schoolers performed sacraments around the tree; they gave offerings in the hope of speaking to relatives and executed convicts. The theatricality reminded me of my family traditions. The yawning hole at the centre of the tree was packed with canteen food and kitchen leftovers—neon Zooper Dooper slush, cubes of black-peppered beef, nuggets. As legend goes, once your sacrifice was made, you had access to the Everywhere. You could talk to any ghost, across any time, interred in any far-flung land.

‘Did you hear anything?’ I asked Kevin Vo, who had ducked his head into the hollow before me.

‘Nah,’ he said, ‘But I got all cold on my neck. Like someone balanced an ice cube there and it slipped down.’

When it was my turn, I pulled air into my lungs. I willed my body to be calm, to be open and unafraid. Above me, all I could see was an expanse of arcane, flaking black, the wood still radiating the attar of centuries-old fire. Bracing my one hand against the trunk, I put my head in.

The smell overwhelmed me: rotten and sludgy with an overripe, sweet edge that triggered my gag reflex. But then, the cool void of darkness began to eat everything up: the stink, the feeling of ants between my fingers, the thick layers of time and distance that I’d found so oppressive. For once, I was nowhere and everywhere. With my free hand, I sprinkled in a handful of sunflower seeds.

One feverish night, I saw the artist Choy Ka Fai bring back the dead, if only for a moment. For Unbearable Darkness—subtitled ‘a paranormal dance experience’—Choy incorporated a spirit medium, motion capture gear and multiple digital avatars into his live séance, inviting the spirit of Tatsumi Hijikata into a new body.

Hijikata is the co-inventor of Butoh, a form of Japanese avant-garde performance that ‘resists fixity.’1 Dancers move in small, relentless, hyper-controlled movements, while also integrating absurd elements inspired by literature and folklore—one performance featured Hijikata humping a chicken, while others showcased androgynous dancers shrouded in white powder and smoke. Butoh is the dance of disease and darkness, of total vulnerability to the forces of the universe. ‘The world’s dance started from standing, but mine started from not being able to stand,’ Hijikata claimed.

As Choy’s show began, I assumed the boundaries were clear. I saw the corners of the stage, the kneeling bodies of Japanese Butoh performer Neji Pijin and ‘shaman’ Rie Usui. A panoramic screen stretched out in front of them, displaying tranquil images of leafy dogwood trees and a sparkling bay in Itō city, where the grave of Hijikata rests. The documentary-like footage showcased Choy and his translator cleaning Hijikata’s headstone, before visiting Mount Osore—a temple located in the caldera of an active volcano, believed to be a gate to Hell. These scenes of storied, mist-wreathed plains felt immersive, but also cinematic: I felt I was watching the artifice of narrative unfolding on a movie screen, starring a spirit that was fixed in the past and partitioned from the audience. 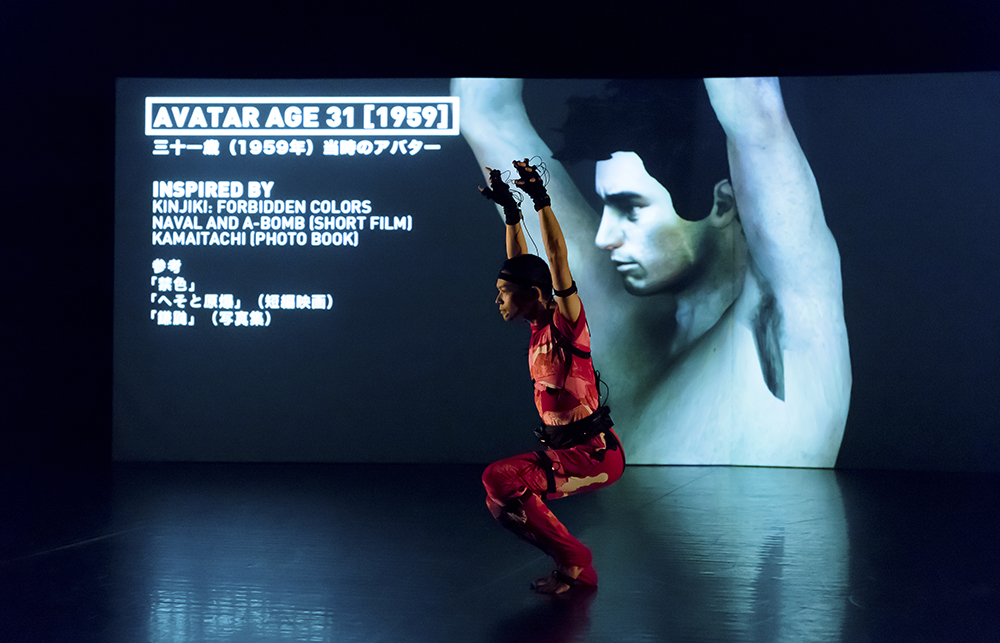 Then, Choy asked a medium in Osore if Hijikata wished to dance, one more time. I wanted to create another sensation, sighs the medium, inhabited by the Butoh master’s ghost, and his desire. I wanted to grow more—seriously, there were too many things I wanted to do. And, just like that, Pijin began to move.

Organic sounds—the rustling of leaves, animal screeching, the vibrations of singing bowls—transmogrified into something cybernetic. Synths, keyboard clattering, spasmodic glitches melded into a joyous club beat, as Pijin crawled, lunged and gyrated. Sometimes, he paused: the body on stage jerked to a standstill, as if the twin souls knocking around inside struggled with sharing limbs.

One-by-one, a series of unique digital avatars were introduced on screen, each mirroring Pijin’s live movements. True to Butoh’s history, each character was inspired by the debris of the wider world—everything from Christ to German Expressionism to Hatsune Miku anthropomorph gestures. In a memorable segment, a grotesque, Francis Bacon-inspired figure writhed and juddered in a pit of computerised lava, while Pijin was overcome with his own paroxysm of ecstasy on the floor.

Japanese Butoh was a ‘complete rejection of, not only the aesthetics of the time, but the entire socio-cultural climate of then-contemporary Japan and its past.’2 It drew from the past to riddle references with sickness, to challenge and innovate. A similar transformation of tradition is seen in Choy’s collaboration with Pijin, a Butoh dancer interested in challenging the lineage of Butoh: Choy sees in the art form a ‘rebellious potential that opposes the superiority of Western dance cultures and seeks a choreographic language for the Asian body.’ Both tradition and our hyper-mediated present are defiled and reshaped: holy, ancient imagery, like the golden bust of Hijikata dominating the screen, is immediately undercut by halos of endless, swirling dicks. Every avatar, not quite able to keep up with Pijin’s intricate movements, begins to contort into something deformed, alien and new—something wholly paranormal.

The constant sensory onslaught of sound and fluid movement; the way the audience regularly burst into gasps and breathless laughter; the total expression of human emotion; and the extra-terrestrial beauty of live digital performance—it all collapsed my sense of place and time. I felt as I did when I was a child, in the hollow of that tree, seeking to disappear, to be freed from the bounds of my family’s history, geographical borders and the mortal plane.

But this is a near-impossible task, a difficulty the show acknowledges. At one point, the stage becomes awash in warm, dim light; the screen melts into a gradient colour field of rich orange. Usui kneels in the quiet and whispers: ‘The ghost of Butoh is immense and omnipresent…I question: how do we deal with this attachment. Is forgetting the only way to move on?’

For a moment, Choy and Hijikata made me forget—and I believed.

An earlier version of this article misstated the lead Butoh performer as Choy Ka Fai.