This text is in dialogue with Caroline Garcia and JD Reforma’s collaborative exhibition The Fullness of Time at Verge Gallery. The exhibition explores the way time is recorded in materials and language through two distinct, yet interrelated, approaches: a choreography of transliteration, oscillating between Tagalog and English (Garcia), and an accretion of gestures and distilled materials associated with Asia and Pacific cultures (Reforma). This text is an exploration into the cultural significance of various materials presented in JD Reforma’s work.

The name coconut comes from the colonial seafarers who invaded the Asia-Pacific region in the 16th and 17th centuries. For the Spanish, the three indented pores on the base of the shell resembled the face of a shape-shifting ghost or monster called coco.

But coconut can refer to many things: the whole coconut palm, the seed, the fruit, a flavour, a scent. It is popular for its versatility of uses, which range from food to cosmetics. It is the stuff of oil, milk, charcoal, soap, furniture, and handicrafts. The root can be used to make dyes, the trunk as timber for houses and boats, the coir binds ropes, rugs, and sacks. It is a material, a food, a currency, and a tool, all at once.

After planting, a coconut tree takes five to six years to grow before it begins to fruit. But fruit production doesn’t flourish until the tree is more than a decade old. With a lifespan of sixty to eighty years, coconut trees are considered the ‘tree of life’ or the ‘three-generation tree’, supporting a farmer, their children, and their grandchildren.

The Philippines is the world’s second-largest producer of coconuts, and it is one of the country’s largest economic exports. In 1978, the former First Lady of the Philippines, Imelda Marcos, re-allocated 37 Million PHP from the coconut levy fund (created for the welfare of coconut farmers) to commission the construction of the ‘Coconut Palace’—an opulent government building made entirely of coconuts. The Coconut Levy was a Marcos-Era state-sanctioned tax imposed on coconut farmers under the pretext of improving industry production and livelihoods. In February 2019, President Rodrigo Duterte vetoed an amendments bill that pushed for the disbursement of the coconut levy, ignoring the welfare of over 3.5 million coconut farmers in the country. 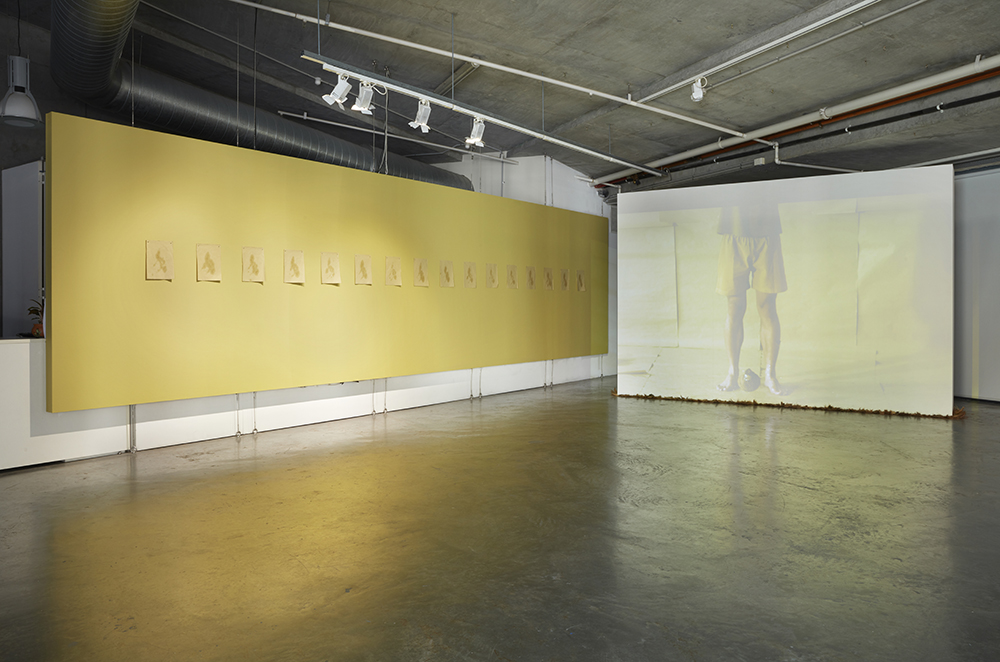 I’m watching JD Reforma’s ‘Brown on the Outside’ (2019), a projected video that features the artist dropping coconuts to the ground. Shot below waist level, the coconut falls in slow motion from above Reforma’s up-stretched arms (out of frame), down the centre of his body, before striking the ground. I find myself caught in this moment, awaiting the finale, where the husk splits and a wave of coconut water spurts out. Time suspends and stretches, before coming to a halt. Bouncing to rest on the ground, the image of the coconut intersects with the fringe of fragmented coconut husks lining the gallery wall.

In the corner of the gallery sits ‘Eczema Archipelago’ (2019), a mosaic of fragmented coconut shells resting atop a fluorescent blue wooden table. These fragments resemble sections of land—islands, if you will—floating on a flat oceanic seascape. The negative space between the shells is reminiscent of land masses floating away from one another, or cracked skin. Taken together, I see in the dried segments of coconut shell an archipelago impacted time and again by landslides and coastal erosion.

Coconut oil is a popular ingredient in natural skin moisturisers. It is comedogenic, meaning it blocks pores. It acts as a barrier, protecting against skin infections and wrinkles, and as a skin tanning agent.

Skin has a tendency to accept and reject certain environments, climates, and weathers. It begins plump and soft, but, with age, it starts to stretch and wrinkle. Skin absorbs, protects, regulates, senses and conceals. It peels and coats. It is a sheet, a mask, a membrane, a threshold. Hard-shelled and covered with coir, the skin of a coconut is much tougher, more resilient, more difficult to crack. 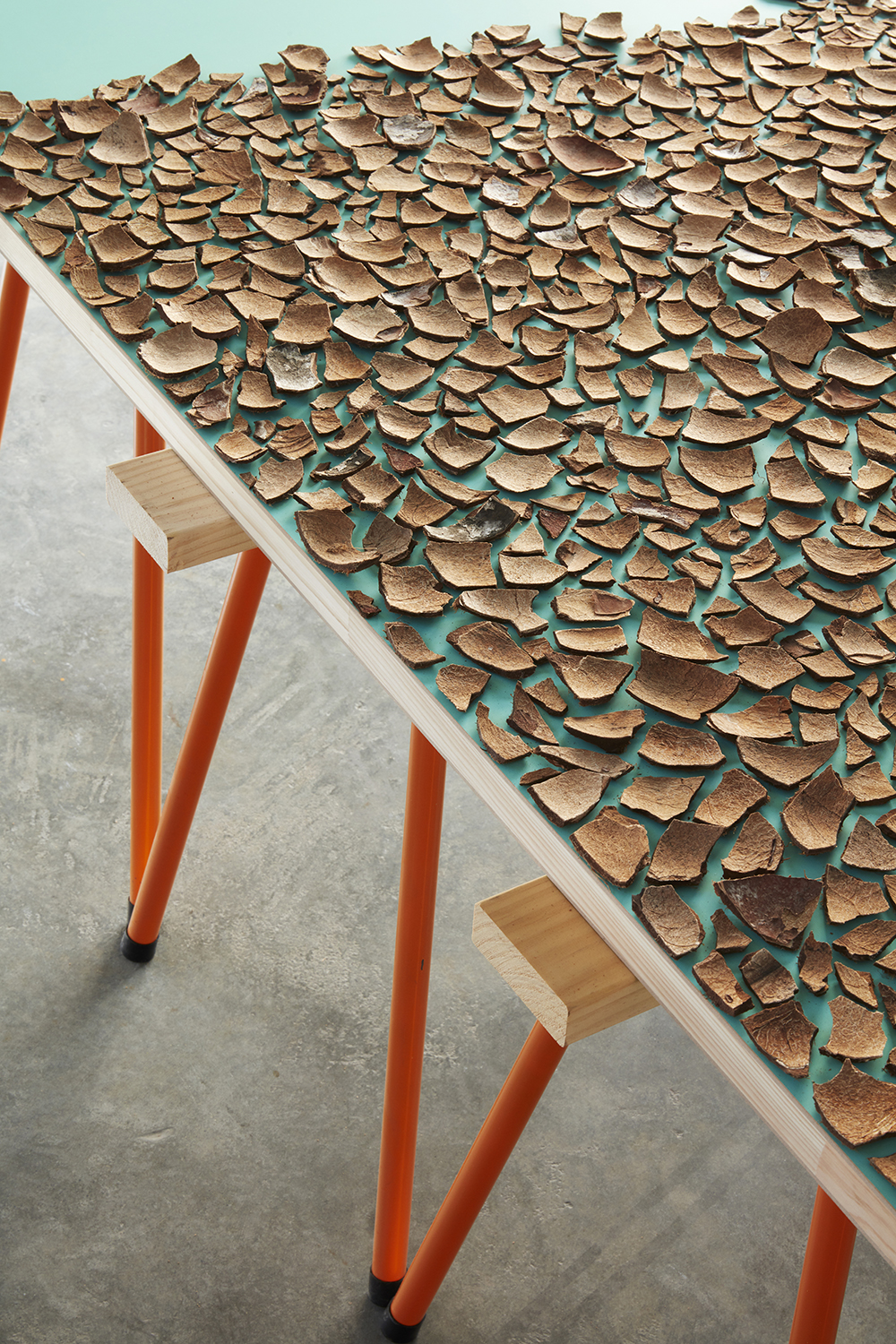 Earlier this year on a trip visiting my family in the Philippines, I watched my titas and cousins, some as young as two, apply layers of baby powder to their skin throughout the day. At any given supermarket or cosmetic store in the Philippines, you will find a section of skin whitening products. These can also be found in the smallest of spaces—on the shelf at general stores, street market stalls, and souvenir vendors in airports.

Coconut is an ethnic slur. In 1999, the Philippine government filed a diplomatic protest with the Spanish government, the European commission and manufacturer Nabisco Iberia, objecting to the use of the name ‘Filipinos’ for the snack food: a vanilla biscuit with a chocolate coating.

For ‘Whitewash’ (2019), Reforma has coated the adjacent gallery wall with faint orange strokes made of soap, creating a skin out of its waxy residue. Small clumps of the skin whitening soap cling to the grooves of the wall’s bumpy plaster, while the excess sediment piles along the ground. Like skin, the wall is a surface marked by a durational gesture of application.

Time can be recorded, captured, objectified, fragmented, stretched, slowed down, and quickened. It can be experienced: in, across, through, toward, of, around, beyond. It can be non-linear and plural. We move and organise in, across, through, toward, and around time. It is constant. To say something will happen in ‘the fullness of time’ is to mean it will happen after a long time, or a long series of events. In Galatians 4:4-5, Paul writes a letter to the churches of Galatia, describing the birth of the son of God as ‘the fullness of time’—of having come at just the ‘right time’ (in the divine scheme of things).

In this fullness, time is given a body. It suggests that time can indeed be ‘full’. What is the stuff that fills time? How can we think of time differently, other than as a marker or an indicator, as something experienced and felt?

A suite of sixteen coconut oil paintings of the Philippines on manila paper hang across the far-side wall. In ‘Pacific Sebum’ (2019), the coconut oil secretes and seeps, blending 7,000 archipelagic islands together. Across these landscapes, islands melt into one another; they are submerged, smudged and erased. I think of the climate crisis, and the rising sea waters that are beginning to swallow our islands. Villages have already gone underwater, and islands have been lost and abandoned. Water has become a marker of time. Like water, time is fluid, and anticipatory: eventually, in the end, in due course, in time, after some time, finally, at last, ultimately, someday, sooner or later. And, in the fullness of time, what has endured and quickened in waves, will rest and slow.