i. a prickly pear

I’m crouched behind a prickly pear, in a western Sydney market garden. A cold front blows-in, brooding along the Deerubin (Hawkesbury) River. The daylight will soon be gone, there is no budget to reshoot, and our coffee and pastizzi supplies are exhausted.

We are in Londonderry to record the Maltese Community Association choir’s tender lament to their future. It is an intimate scene. As GeriActivists—semi-retired market-gardeners—gather around the camera to sing acapella to their descendants, their voices resonate with hope and tenderness, but also with concern. Their future and the future of this country is highly contingent.

Our hosts, farmers Aly and Alf, are aged in their 80s. Theirs is a typical migrant story: a lifetime of ‘heavy-lifting’ while raising a family. They worked the country and the earth reciprocated by sustaining them. Today, Aly and Alf’s children and grandchildren are professional metropolitans with little time (or desire) to farm. This soil is destined for development and for their parents, it’s a dilemma.

Back in the 1950s and 60s, this part of Sydney’s western periphery was surprisingly rural. To make ends meet, Aly and Alf repurposed the fertile wetlands as temporary construction sites. They spent months mixing cement, with water and gravel, and pouring the completed concrete into massive moulds. The monoliths were trucked off to the big-smoke.

Eventually, I ask them what on earth the concrete was for.
‘The Sydney Opera House,’ they announce.

ii. concrete is a material and a mindset

After water, cement is the most widely used substance on the planet. The Romans mixed cement to make concrete and built the Colosseum. Cement has been an instrument of empire since antiquity. Between 2011 and 2013, China mixed more cement than the amount set in the United States during the entire 20th Century.

Cement is at once a material and a mindset. Rivers are dammed, bridges spanned, and car-parks planned in such vertiginous numbers across the globe that the civil rights group, Transparency International, claim the application of concrete is synonymous with corruption. Paradoxically, the cementitious nature of concrete enables millions to live safe, sanitary lives. Researchers at MIT defend concrete, citing that the tactical use of cement can transform national infrastructure, bring prosperity and relieve poverty, not to mention its ‘continued and sustainable application’ in response to climate change.

Concrete gives and takes. In Sydney during the 1970s, ‘unskilled’ migrant workers weaponised its fast-setting materiality. Recognising that the application of liquid concrete on a building site was time-critical, the labourers halted the concrete pour, undermining the developer’s bottom line and leveraging the social benefit for their community. These timely interventions saved working-class districts from demolition, and prevented further destruction of Sydney’s cultural heritage.

As you read this article you may consider your own surroundings. Perhaps that artwork hanging before you on a delightfully perpendicular wall is supported by a concrete slab? Across the globe, cultural institutions, galleries and museums are aggregated by concrete. If the art and culture in your town is not yet housed in the stuff…standby. It soon will be. Artists are enabled and framed by its commodity. Audiences and populations are addicted. As consumers, we are complicit. 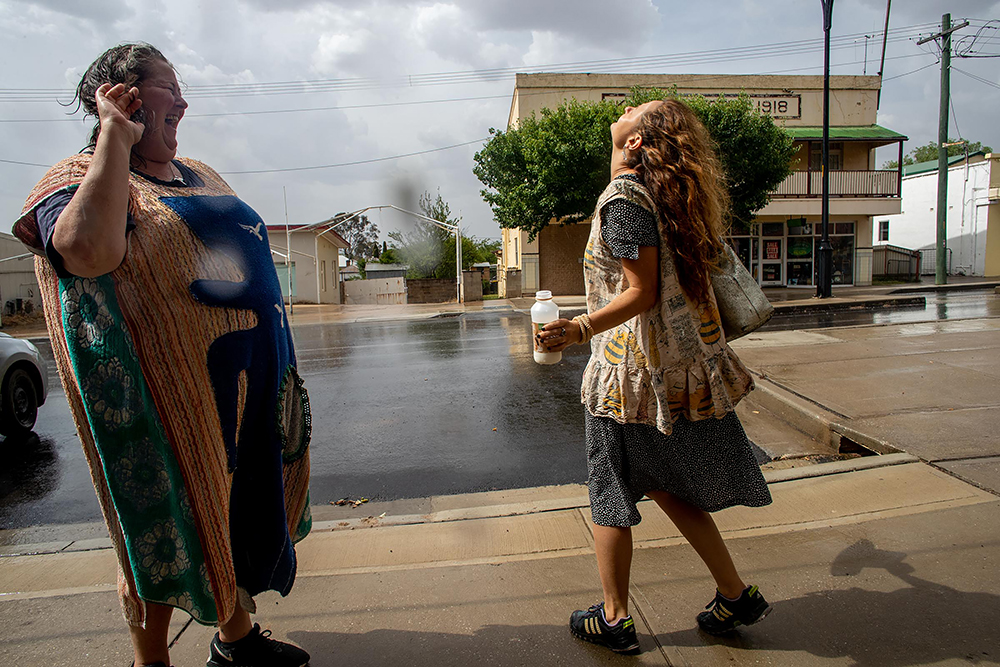 The inhabitants of the twin-towns of Kandos and Rylstone spent a century extracting deposits of coal, lime, and water to produce cement. Sydney’s urban infrastructure was constructed with it. Today, post-industrial Kandos hosts Cementa, a biennial festival of contemporary art.

Kandos is both context and catalyst for the festival. Typically, the curatorial team invite the participating artists to reside here for two weeks. The artists can engage with the town’s idiosyncrasies, its inhabitants and the World Heritage of the Wollemi National Park. Since Cementa’s first iteration in 2013, hundreds of artists have responded and exhibited at the festival.

I meet Alex Wisser, the Creative Director of Cementa outside WAYOUT gallery. He is footing a ladder for a local volunteer who is securing a banner above the door. Looking down, the volunteer apologises for missing this year’s festival. As a jobbing coal miner, he is expected back at the coal face tomorrow.

Matching the value systems of artists with those of the Kandos community is a delicate balance during these climate-critical times. The Cementa model relies on good relationships with the small town. Wisser stresses that efforts to create community engagement need to be framed correctly, and artists should look for situations to connect with community in a friendly frame of mind. But bring your points of difference along, says Wisser, and produce inspiring ideas for the communal table.

This year, complex abstractions sit alongside populist events. Bryden Williams emulates geological time by slowly melting large blocks of frozen water and Black Cypress gathered from Ganguddy (Dunns Swamp). Suspended above an engine inspection pit, the slowly melting glacier creates a tension. I gasp when the ice slumps into a drip tray. The taste of burnt sump oil, emanating from the inspection pit, catches in my throat.

Later in the evening, the Queer anarchy of ‘Cementa Love Letter – A Variety Night’ at the local Returned Services Club refracts cliché with an agile, curatorial touch. The burlesque-styled Motel-Sisters merge a camp-cabaret review with karaoke, public oration, amateur-dramatics, and a meat raffle. The performances oscillate wildly, and at some point, segue into the Kandos-Fringe. We upcycle, frock-up, and ‘Circumnavigate Kandos’ in towelling couture.

iv. country talking to the city

Fire proclaimed itself as an emotional leitmotif to Cementa19. Sparks first appeared in September, during the lead up to the festival, just as Tammy Brennan’s experimental opera performance, ‘//Transcript//’, enraptured the audience. Encircled by standing stones, we observed the sun set and the moon rise. The work referenced animist, Druidic traditions. A fire-show enhanced the performance ritual.

A few weeks later, during October, lightning struck the nearby Gospers Mountain. The fire resulting from the strike continued to smoulder deep within the Wollemi, and, by the time the festival opened, it had burned-out almost 300,000 hectares of the National Park.

Any wide-angle photographs taken during Cementa19 will confirm the presence of eucalyptus smoke. It is imprinted within the depth of field. A low-lying haze of angst was also palpable as evacuees (such as a local Alpaca farmer) found safety in Kandos. A dry and brutal fire season had been predicted. It is a legacy of the age. Eventually, the smoke reached Sydney.

Sydney’s western suburbs, three and half hours drive away from Kandos, were choked in smoke. It felt as if the smoke was the country talking to the city, dissuading some would-be festival visitors and activating others. Cancelled room bookings at the Kandos Hotel were taken up by firefighters.

v. we are keeping culture strong

The Dabee—traditional owners and custodians of this part of unceded Wiradjuri country—have used their language of art, dance, voice, and lore to maintain First Nation culture throughout millennia. This Indigenous community had their cultural connections almost severed when most of the clan were massacred by colonial settlers in the 19th Century. This year, the theme selected by the National Aborigines and Islanders Day Observance Committee (NAIDOC), was Voice Treaty Truth. It was hoped that vocalising the truth of the colonial massacres would help to reconcile local trauma and move towards a federal Makarrata (treaty). But, as the Guardian’s ongoing series ‘The Killing Times’ suggests, a full reckoning with our violent settler history is still decidedly absent from public discourse.

In 2019, the Dabee declared ‘Wirimbili-yahni Wiradjuri Walan’ (We are keeping culture strong). The Aunty Lyn Syme Memorial and Dabee Art Exhibition opened the Aboriginal Cultural Centre in Kandos on Thursday 21st November. During the opening, Djon Mundine, the Curator of Cementa19’s First Nations program, described the Dabee space as possibly the most exciting Aboriginal cultural centre in the world. But supporting artists to create work in response to healing, truth-telling, and treaty processes is emotionally demanding curatorial labour. This sense of grief and loss was apparent in the room. However, the Smoking Ceremony offered a cathartic remedy. The ritual smoke carried through the room and lifted-up everyone’s spirits. It animated a tangible, psychic response and, in that moment, the place, the people, and the artwork felt eternally present. 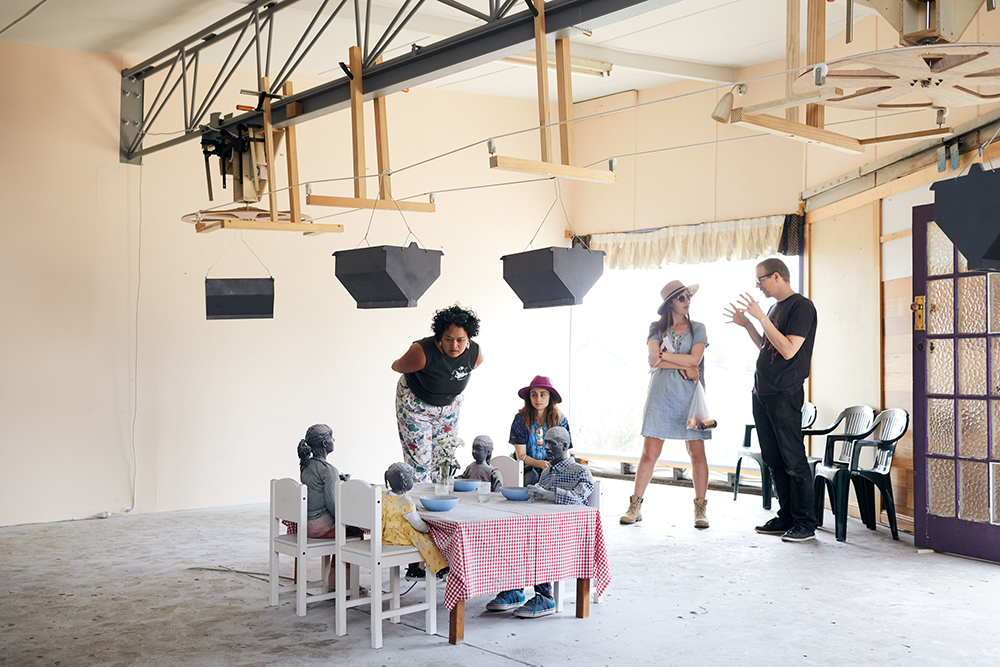 [Kandos] proclaims its nature with a bucket ropeway across the access road,
a factory belching white smoke, men in the street wearing hard helmets,
and caked cement dust everywhere.1

In the pomp of peak-cement, Kandos supported a population of 2500. But then, starved of capital investment, production was phased out, and the workforce retrenched. By 2013, those who could afford to left town, leaving a precarious, post-industrial vacuum. But as big cement shipped-out, local culture reasserted itself. In the 1950s, 60s and 70s, Kandosian pragmatism emerged from a class power-struggle. Everyday philanthropy saw locals conceive and develop the town’s special amenities such as the community centre, the swimming pool and the Rescue Squad.

In Kandos today, volunteer organisations like the Country Women’s Association are resurgent. For Cementa19, the CWA collaborated with Lindsay Kelley for the performance work ‘Tasting History.’ At the workshop, participants relied on basic rations—fat, carbohydrates, and politics—to elaborate on Kelley’s BioArt kitchen. We improvised with ANZAC cookies, and baked friendship and surplus value within them. The biscuits were gifted to the WAYOUT Gallery, where the traces of our performance were then digested by the café regulars.

vii. art in a suitcase

I volunteered for Cementa19 in order to better understand its nature, and I came away with a deep appreciation of the complex ecology of volunteerism that sustains the town, and the festival.

Bec Dean, Cementa’s Chief Curator, recalls when Time Place Space: Nomad travelled to Kandos in 2014. Anticipating a polarised arts funding landscape, the collaborators asked if art could be made in a suitcase, what would be the minimum requirements to produce it? Today, Dean questions if avant-garde models of socio-cultural engagement can continue to run on the smell of an oily rag.

The transition away from extractive industries in regional Australia is inevitable. Real-time investment in art production in western NSW must follow suit, however, the Federal Government has instead shuffled the arts to the bottom of the pack. Dealt an empty hand and with little stake-money, the arts’ position of influence is increasingly precarious. Yet, in this negative space lies Cementa. Its very existence proves that such festivals are both desired and required.

Instead of merely providing an audience for imported blockbuster tours, Cementa strives to support a resilient local community and to build their capacity to co-create contemporary art.

The Cementa model values the scare resources of country and people. But should Cementa’s aspirations to produce knowledge and improve health be delimited by anxiety over profit and loss, funding policy, and political will? What will it take for Cementa to support and maintain the health and resilience of people way-out west?

The generosity of volunteers generates surplus value. For Cementa to imagine a place in the future, it must continue to re-circulate this surplus value, along with the regenerative value of the everyday philanthropy of locals and visitors, who come together to establish common ground.

Artists make art and produce culture at Cementa in a context of collaborative and participatory forms of social engagement. Alex Wisser urges all artists and art workers (and audiences) to get out of the metropolitan art-world and participate in cultural change. If art by its nature changes culture, therefore, anyone who adapts culture is an artist. And any activity that changes culture is art.

Cementa is both vulnerable and robust. It fluctuates between the sustainable and the unlikely. And in many ways, that’s the point.

Disclosure Statement:
David Ryan benefitted from an Art & Design Grant (courtesy of Arc @ UNSW Limited) and was accommodated as a guest by Cementa.
Massive respect to all the artists and volunteers who collaborated at Cementa19.