The Ghosts of Nothing / In Memory of Johnny B. Goode is the culmination of a four-year collaborative project featuring the eponymous (and fictive) rock group comprising Sean Lowry and Ilmar Taimre. A visually rich, multi-layered presentation, it initially existed as a ‘rock opera of expanded cover versions’. At The Lock-Up Gallery in Newcastle, the city’s main experimental arts venue, it manifests as a sprawling installation, inhabiting the cells and main exhibition spaces of the former police station turned arts centre. Over the course of its development, Lowry and Taimre recruited a number of other creators and performers into the project, keeping an open-ended approach to all its constituent parts.

The show’s title offers some insight into the positioning of the works: Johnny B. Goode, of course, being a fictive creation of Chuck Berry, and here he is conflated with another figure of invention—Pierrot, the sad clown. Pierrot is an outsider, at once comic, subversive, melancholic, and able to rise above pathos; Johnny’s guitar talents are his redemption, offered up as a means of expression for an alienated and disregarded class. But the advent and transformative power of rock and roll is gradually receding into its own historical moment, one which may eventually become as obscure and distant as the demi-monde of tragicomic Pierrot (now mostly a figure of scholarly interest or historical curiosity, but no longer in circulation across contemporary popular culture). 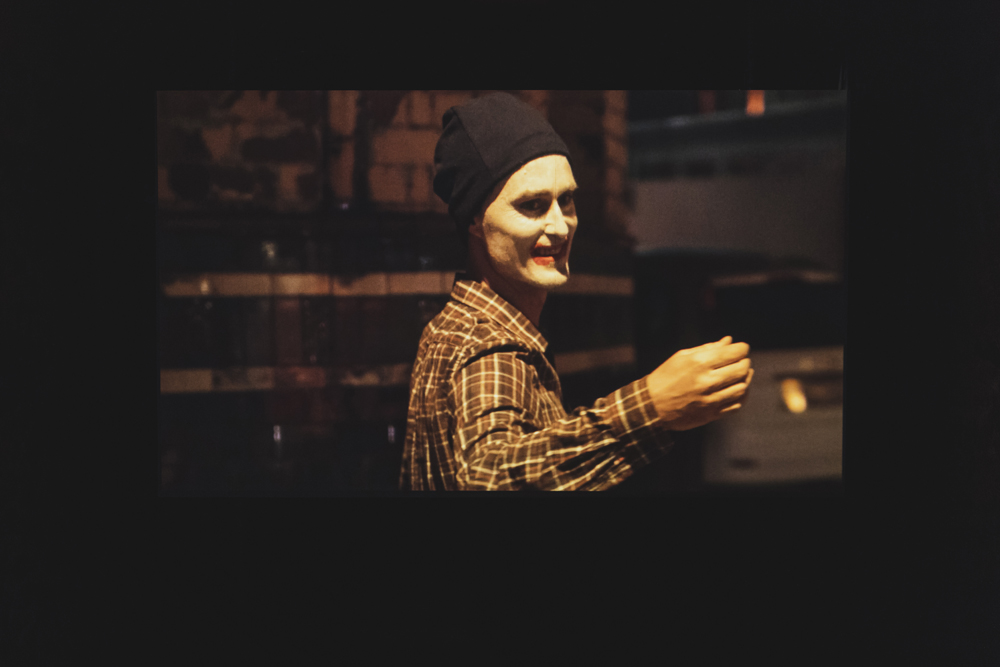 In their accompanying essay ‘Are we a Band?’, Lowry and Taimre make the claim that the connection between Pierrot and the figure of the doomed rock star is itself an outcome of their core project. It is informed, as Taimre suggests, by Umberto Eco’s theory of an ‘open work’—a result of the hands-off creative process they term world making:

We simply started with the music and then allowed it to evolve from there. The early involvement of a diverse range of collaborators—who were given only minimal guidelines or constraints regarding what we were looking for as producers—simply ‘opened’ up things to even broader possibilities and horizons. [1]

In the main gallery spaces and three of the cells, the contributions of Laura Purcell, Frank J. Miles, Charles Famous, Lyndall Johnston, Coleman Grehan, Zoë Tuffin and Zackari Watt, are presented as video projections. They are indeed highly diverse: a lone man singing in the street, ignored by passers-by (Frank J. Miles, ‘This is Johnny’), a melancholy puppet show in an abandoned quarry (Laura Purcell, ‘The Mirror’), a single street-dancer outside an abandoned music pub on a dark, empty night (Charles Famous, ‘Betrayal’). In the smallest cell is an audio-visual work featuring the poetry of Albert Giraud, the early twentieth century Belgian symbolist poet. Stemming from a radio play (which was itself an extension of the band’s first album), Taimre has loosely tanslated Giraud, replacing references to Pierrot with ‘Johnny the clown’:

Alongside the big-screen video projections of these abject performances are their equally abject and forlorn-looking props and costumes, such as masks and (now rotten) chocolate pennies, which are presented as exhibits in the small, dark cells. Quite dead now, they appear as relics—placed in vitrines, hung on hooks, redundant and detached, backed by the mottled, graffiti-scratched cell walls. There is a tension between the site’s history of constraint and containment, and the free-form approach of The Ghosts of Nothing. Absurd, tragicomic moments crop up throughout: in the padded cell (itself now a site of historical interest) hangs a dark T-shirt, inscribed with the legend ‘Tenderness’; elsewhere, ‘band merchandise’, consisting of CDs, T-shirts and posters, is presented as though for sale to the fans after the gig. 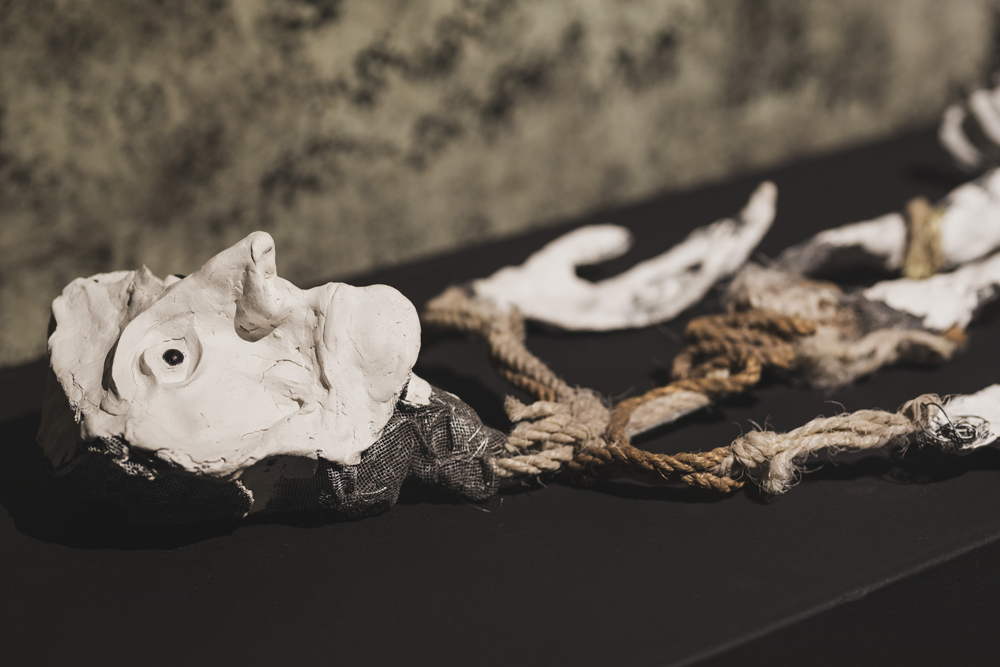 The Ghosts of Nothing / In Memory of Johnny B. Goode can be read as a ficto-critical extravaganza, but it is also an invitation to reflect on the creation and evolution of a ‘world’. The exhibition serves as a proposition of the way rationale and meaning might develop within such a world, creating a self-perpetuating, but also cumulative, mythology. The creation of this world, and of the structures and meanings within it, recalls Camus’ discussion of the absurd in The Myth of Sisyphus (1942), and the requirement that each of us determine our own meaning and purpose.

Perhaps the most intriguing insight this exhibition has to offer is in the creation of this meaning, which is evident both from the statement of intent offered by the artists, and the eclectic quality of the subject matter—works that have been brought into and ascribed significance in this ‘made’ world. ‘Fitness for purpose’ implies a scale of values, and purpose is always subjective and created: fans, followers, collectors, invest huge amounts of time and money in their favourite bands, projecting their own fantasies onto them; bands have their aficionados, and their passion can be intense.

This created world—the narrative of In Memory of Johnny B. Goode—presents an equivalence between life on the road for a rock band, symbolist poetry, and Pierrot, because it sits fully within this Absurdist tradition. Such worlds are creative acts, and their significance and rationale stems from all those who participate in them.

[1] Ilmar Taimre, in correspondence with the author

Tags: ilmar taimre, in memory of johnny b goode, installation, Media art, Performance, sean lowry, the ghosts of nothing, the lock-up