This month, I walked into the University of Sydney and was greeted by angry black scrawls of graffiti on the bus stops: ‘No More G**ks’. I immediately recoiled from a caricature of an Asian face with slanted eyes. A ‘Stop the Asian Invasion’ tag was found on three different locations on campus, as well as on sites across the city of Sydney.

On June 30 in 1861, a crowd of 1000 to 3000 men marched on the goldmines of Burrangong in New South Wales (today the town of Young). On reaching the mines, they brutally attacked the Chinese community, burning down their tents, scalping and raping them. They cut off the pigtails of the Chinese migrants (known as queues), and brandished them as trophies.

This incident is known as the Lambing Flat Riots: one of several attacks conducted by Australian, British, European and American-born migrants against Chinese miners over a ten-month period between November 1860 and September 1861. Although these organised race riots are considered to be the largest racially motivated riots in Australia, they have been omitted from our history textbooks.

The Burrangong Affray at 4A Centre for Contemporary Asian Art opened in June, a timely exhibition set against rising anti-immigration sentiment and racial tension. In response to the forgotten histories of Chinese migrant gold miners, curators Micheal Do and Mikala Tai, with historian Dr Karen Schamberger, have commissioned Chinese-Australian artists Jason Phu and John Young Zerunge to create a four-part exhibition project. The Burrangong Affray is the second iteration of this project, presenting nine mixed-media artworks that are the result of eighteen months of site specific research. 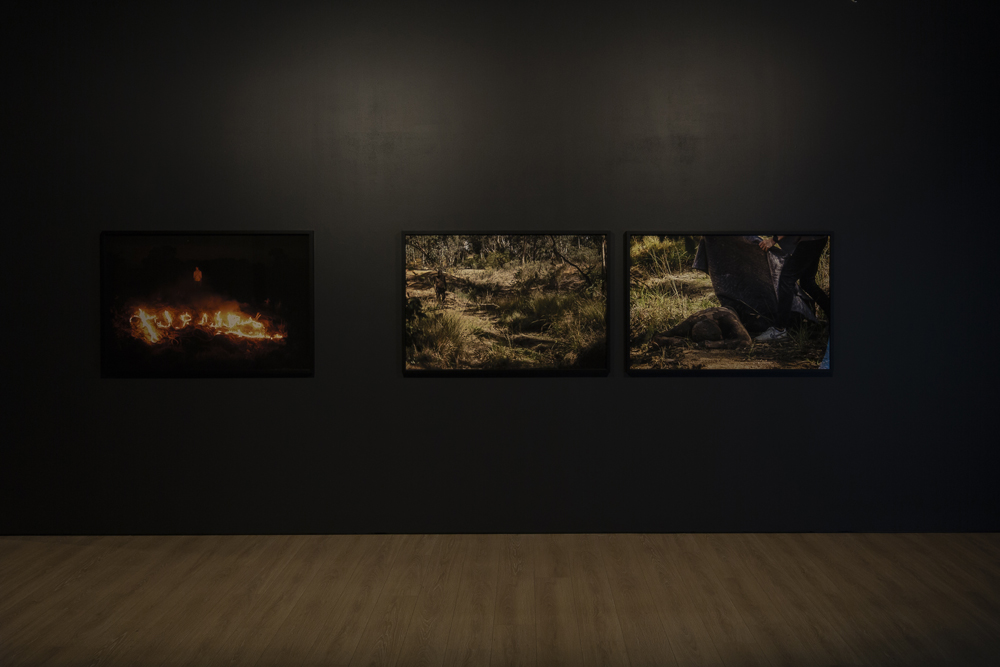 Left to right: Jason Phu, Do not stick your hand in the fire, sit near it and observe the stars, (2018)
John Young Zerunge, ​Action: Covering​, (2018)
Both works commissioned by 4A Centre for Contemporary Asian Art for ​The Burrangong Affray: Jason Phu and John Young Zerunge
Image credit: Document Photography

Entering the gallery space, the audience is greeted by an eclectic range of objects—video journals, freehand drawings and thoughts painted onto the gallery walls—all of which form part of Phu’s installation ‘In the Morning I Wake the Rooster. In the Afternoon I Drive Across the Mountains & Waters. At Night I Cut All My Ties’ (all works 2018). Written directly onto the walls in pen, the words are personal (‘I have always known cars and always known warmth’) and introspective—‘people want to know what is right and wrong’, writes Phu, ‘but there is no right and wrong, only the right balance’. Set amidst these confessionals is a video of a looping rope, which spells out the word ‘queue’ before being engulfed in flames. Although it references the hairstyle of the Chinese gold miners, the word is also reminiscent of queues of hopeful immigrants, both of the Chinese migrants then, and those now seeking asylum.

A piece of burnt rope, resembling the plaited braid, is nailed onto the gallery wall underneath the video. I think of my mother’s black hair—I always admired it, but when I turned 13, I began dreaming of thin blonde locks instead. I bleached and burned my scalp raw, rejoicing as my hair transformed from shiny black to bristly yellow. But my hair rejected this change; the thick black clumps fell into my hands.

The recurring motif of the queue hairstyle also appears in Young Zerunge’s video ‘The Field’ (2018), in which a young, red-headed, white girl has her braid tugged by the hand of an unseen figure. By replacing the Chinese victim with a young, white woman, the video exposes the double standards around violence being inflicted against those who are white, and those who are not. The action itself is reminiscent of playground bullying, but the pain that is being imposed here is symbolic of a larger unspoken cruelty.

At the age of six, I waited patiently in a queue for the playground slide. My white-Australian peer behind me, bored and curious, pulled at my hair, the ink shade of my thick pigtails a shocking contrast to her fiery red ringlets. Later, when I would see my roots reappear, I would immediately, furiously, bleach them again.

Whilst the subject matter at hand is traumatic, what is striking about this exhibition is the grace, compassion and understanding with which Phu and Young Zerunge have approached it. One part of Phu’s multimedia installation on the ground floor consists of a large lion costume, with an accompanying video documenting Phu wearing this costume in a performance at Blackguard Gully. We watch as Phu conducts a ceremonial dance and community offering on the outskirts of Young, welcoming in good luck, banishing bad spirits, and inviting non-Chinese residents to join in a gesture of healing and collective remembrance. 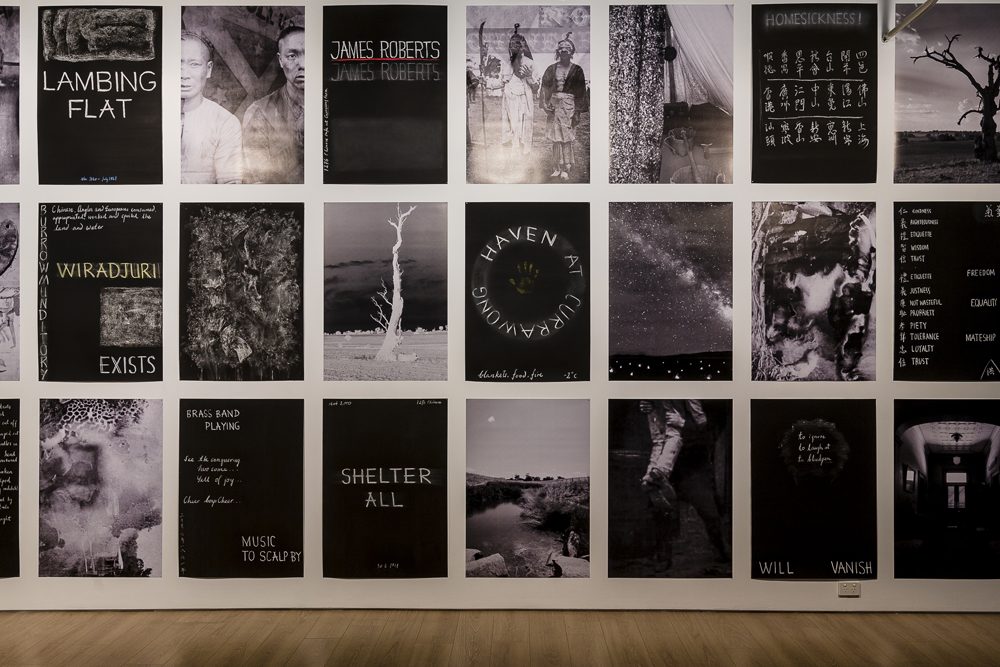 Similarly, Young Zerunge decides to focus on the benevolence and kindness of a white farmer, James Roberts, who sheltered around 1,500 Chinese gold miners fleeing from the violence. Young Zerunge’s Lambing Flat (2018) includes a series of contemporary photographs that document the land around Currawong Farm, which are then overlayed with archival images from the Gold Rush era and text. By choosing to focus on Currawong Farm, Young Zerunge presents a method of healing that steers away from dogma and vitriol: despite the underlying trauma, Lambing Flat (2018) implies a refusal to concretise the us versus them binary, one which is often detrimental and reductive. ‘Contrary to what we may have been taught to think,’ writes bell hooks, ‘unnecessary and unchosen suffering wounds us but need not scar us for life. It does mark us. What we allow the mark of our suffering to become is in our own hands.’ [1] For many Asian-Australians, incessant anger and resistance can become a war of psychological attrition, suggesting that while works that point out racial injustices are important, so too are the works that have the capability to heal and soothe.

The title of the exhibition encapsulates this conciliatory approach. The term ‘affray’—‘an instance of group fighting that disturbs the peace’—seems incongruous with the violence and terror of the actual riots. But with political figures and the media increasingly deploying strong, high modality words, and encouraging a perpetual cycle of outrage, such words often lose their meaning or worse, perpetuate simplistic sentiment. The titling of The Burrangong Affray is mimetic of the grace and delicacy of Phu and Young Zerunge’s works, an intriguing term that invites viewers to judge this history (and the response) for themselves.

For the first time in eight years this year, I dyed my hair back to my original black. The graffiti around the university has been painted over, although there is an anxiety that still lingers. But I realised that there was no need to sensationalise, to temper, to please, to sanitise, to hyperbolise or to assuage—I simply needed to let my roots grow out and down.