This is part one of an extended review considering Vernon Ah Kee’s The Island at Campbelltown Arts Centre.

‘That’s not an accident.’
Lex Wotton

The ‘island’ continent often referred to as Australia is underpinned by a carceral imagination. A national mythology casts settlers as a bunch of resourceful larrikins, petty criminals, and misfits that transformed a rugged frontier outpost into a profitable pastoral economy, all while maintaining a healthy skepticism of British pomposity. The penal origins of settlement remain crucial to the project of nation building: they establish a connection to the British Empire while also providing a point of differentiation and distance. In the repetition of colloquial narratives of settlement, the penal colony—and therefore the prison—becomes a romanticised origin for the production of a national identity grounded in a white imaginary.

The prison is, of course, not a relic of the past. It is an infrastructure that remains central to the project of maintaining, naturalising, and disciplining the settler state. The prison and the state’s mobile armed formation, the police, exist in order to protect whiteness against a threat of violence that is always figured as imminent. If, in settler colonialism, as Patrick Wolfe tells us, settlers come with the explicit intention of replacing the Indigenous population, then the preservation and protection of whiteness is central to this task. The settler colony, and its illegitimate claim to ownership, relies on the protection of whiteness at all costs. As such, and as Cheryl Harris has shown, settler law establishes an actual property interest in whiteness itself.1 Harris tells us that property can be understood as that which is metaphysical rather than physical—a right rather than a thing.

For Harris, whiteness—an abstract quality that white subjects alone possess—exhibits the critical characteristics of property: the right to use and enjoyment, reputation and status value, and the absolute right to exclude. The transformation of whiteness into property casts the racialised Other as an impending threat to the value of whiteness which, in turn, provides the necessary basis for the state’s deployment of racial violence.

The rules of possession in the settler colony are qualified by race, and, as Harris notes, ‘only particular forms of possession – those that were characteristic of white settlement – would be recognized and legitimated.’2 Whiteness as property is defined in relation to the dismissal of Indigenous forms of relating to both self and land, which are then re-inscribed into an undifferentiated state of nature. Despite not being a ‘physical’ entity, whiteness nonetheless takes on qualities of property, a relation that is upheld by settler law and implemented by force. Harris elaborates:

The law provided not only a defense of conquest and colonization, but also a naturalized regime of rights and disabilities, power and disadvantage that flowed from it, so that no further justifications or rationalizations were
required.3

The juridical frame that imbues whiteness with value also legislates it as something with the absolute right to exclude, which Harris notes is at the heart of both whiteness and property. Whiteness, then, signifies in multiple and often overlapping ways:

According whiteness actual legal status converted an aspect of identity into an external object of property, moving whiteness from privileged identity to a vested interest. The law’s construction of whiteness defined and affirmed critical aspects of identity (who is white); of privilege (what benefits accrue to that status); and, of property (what legal entitlements arise from that status). Whiteness at various times signifies and is deployed as identity, status, and property, sometimes singularly, sometimes in tandem.4

The bid to preserve the condition of whiteness as property in the settler colony gives rise to what Aileen Moreton-Robinson refers to as the ‘possessive logics of patriarchal white sovereignty.’5 In Moreton-Robinson’s phrase, the multiple valences of whiteness—as identity, status, and property—coalesce to build ‘a mode of rationalization, rather than a set of positions that produce a more or less inevitable answer, that is underpinned by an excessive desire to invest in reproducing and reaffirming the nation-state’s ownership, control, and domination.’6 The possessive logics of patriarchal white sovereignty animate the settler claim to sovereignty, which is a claim that must be asserted over and over again by way of an ever-shifting set of racialising practices. The forms of racialisation that the state deploys—which includes (but is not limited to) invasion, frontier genocide, state sanctioned miscegenation, forced relocation to missions, forced removal of children from kinship formations—are attempts to neutralise that which remains beyond its reach: Indigenous sovereignty. 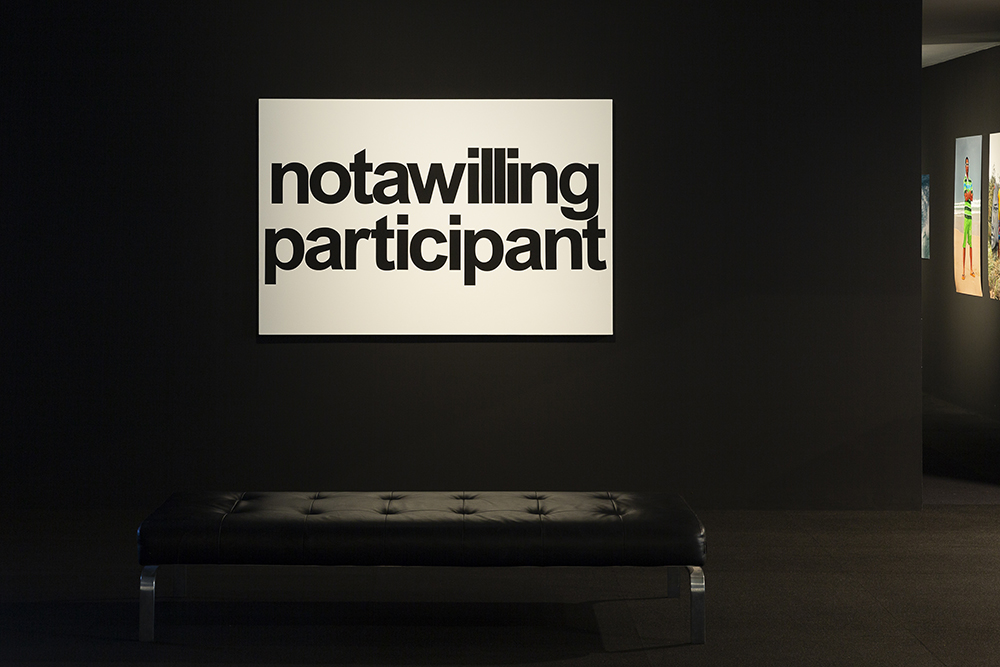 Unable to reconcile this externality, the settler state attempts to resolve the question of ownership within its own juridical framework and through the production of a socio-discursive practice that affirms the value of whiteness as property. White possessive logics, Moreton-Robinson expands, ‘are operationalized within discourses to circulate sets of meanings about ownership of the nation, as part of commonsense knowledge, decision making, and socially produced conventions.’7

The transformation of whiteness into property, and the way it comes to structure the social field and the horizon of perception, has a direct implication on how we understand policing in the settler state. If, as Guy Debord instructs, the police are ‘active servant[s] of the commodity’, then, in the settler state, the police act to protect whiteness. This, of course, we know to be true, even without an appeal to Debord. The deaths of Kumanjayi Walker, Tanya Day, David Dungay Jr., Ms Dhu, Mulrunji Doomadgee, and so many more index this truth.

Within the white supremacist order of the colony, the Black subject comes to embody a threat of violence. Black life and sociality, in their very existence and continuation, pose an insurgent challenge to the legitimacy of the settler state. And so, the deployment of extra-legal racial violence at the hands of the police and the state is rationalised through self-preservation (the preservation of whiteness as property). Here police violence is never read as violence (and its effects do not produce an ethical crisis within the broader white population) because such preemptive violence is always justified in advance.

Such violence is then retrospectively rationalised, as Alison Whittaker shows us, through the language of the law. Whittaker’s detailed study of the language of coroner’s reports reveals the way that ‘Indigenous death and suffering [is] naturalised’ by the settler justice system. She writes: ‘the language coroners come to use about deaths inside is crucial. While coroners can’t impose any liability for the cases before them, they can and do use condemnatory language to express a sense of culpability.’ The justification of police brutality both pre- and post- any specific event normalises the idea that ‘Indigenous people live[] only by the benevolence of their gaolers’.

Vernon Ah Kee knows something of the carceral imagination that underpins settler Australia. Entering his latest exhibition, The Island, at Campbelltown Arts Centre, I’m met with an installation of riot shields hanging from the ceiling in formation. The thick plastic shields, scratched by Ah Kee and covered in layers of fine, charcoal line drawings, index the centrality of policing to the maintenance of settler order. The shield signifies a literal and symbolic barrier: the enclosure of whiteness as that which requires protecting at all costs. The title of the work, ‘scratch the surface’, asks us to consider the racist episteme that lies within the invocation of law and order. For Ah Kee, riot shields (and the cops that wield them with batons in hand) serve as a continual reminder of the forceful reproduction of the state as a racial formation in which Blackness is always-already criminalised. 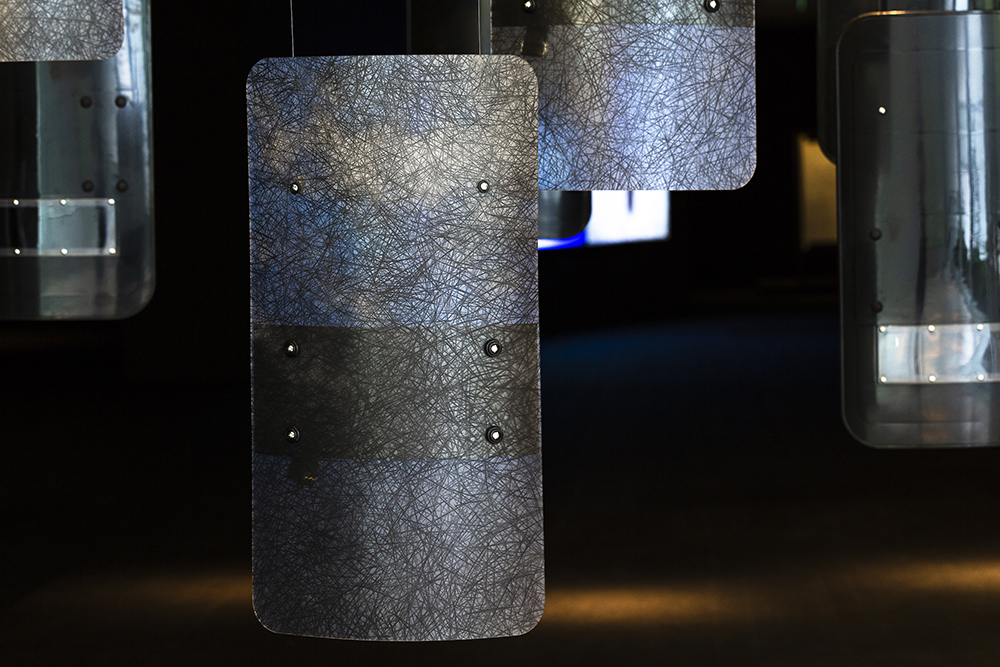 At the far end of the gallery space Ah Kee includes an installation of readymade objects: a series of doors. The installation intersperses toilet doors taken from stalls on Cockatoo Island, covered in racist, sexist, and homophobic graffiti, between three doors taken from the town school in Yuendumu—a small remote community some 290km north-west of Alice Springs. Painted in the 1980s with Dreamtime stories by Paddy Japaljarri Stewart, these doors are now housed in the permanent collection of the South Australian Museum. Titled ‘born this skin’, this collection of appropriated objects takes on added gravity in the wake of the killing of Warlpiri man, Kumanjayi Walker, by Northern Territory police in Yuendumu on November 9, 2019.

The graffiti-covered doors, which Ah Kee first exhibited in situ as part of the 2008 Biennale of Sydney (in the toilet block where he first found them), expose the racist undercurrents that pervade contemporary Australia. Including the Yuendumu doors alongside them draws a line from the everydayness of the racist scrawls found on countless toilet stalls around the country to the death of Walker at the hands of an officer of the law. Walker’s death can be understood not simply as an attack on his individual personhood, but as a preemptive attack on that which is always-already figured as a threat: Black life and its social formations. Of the state’s capacity to rationalise such violence, Denise Ferreira da Silva writes:

Racial violence, unleashed in the in/difference that collapses administration of justice in/to law enforcement, immediately legitimating the state’s deployment of its forces of self-preservation, does not require stripping off signifiers of humanity. On the contrary, this collapsing is already inscribed in raciality, which produces humanity, the self-determined political (ethical-juridical) figure that thrives in ethical life, only because it institutes it in a relationship…with another political figure (the affectable I) that stands before the horizon of death8

The inclusion of the Yuendumu doors in Ah Kee’s exhibition does something more than alert us to the connection between everyday anti-blackness and the ultimate violation of Indigenous life. The vibrant Dreamtime paintings included by Ah Kee are taken from a series of doors that were painted by five senior Warlpiri men: Paddy Jupurrurla Nelson, Roy Jupurrurla Curtis, Paddy Japaljarri Stewart, Paddy Japaljarri Sims, Larry Jungarrayi Spencer.

These sacred and ceremonial images are a testament to the continuity and vibrancy of Warlpiri culture—they exceed the state’s attempts to capture and constrain Indigenous life.

The juxtaposition of these doors speaks to the paradoxical condition of Blackness as something that is both the object of white violence and a continuation of the creativity, beauty and resilience of the world’s oldest living cultures. Blackness is both anti- and ante- the colonial order in that it brings it into being through the production and formalisation of racial hierarchies.

Ah Kee’s inclusion of the Yuendumu doors is a powerful statement about the continuity of Indigenous sovereignty in this country, an assertion of the generativity of what Alexis Wright calls ‘sovereignty of mind’—that which is outside the reach of the settler state and its mechanisms of policing. That Blackness escapes the settler state through a relation of precedence calls into question the order that colonialism so violently imposes upon the world.

Moten elaborates: ‘[it] is not (just) that Blackness is ontologically prior to the logistic and regulative power that is supposed to have brought it into existence but that blackness is prior to ontology.’10 Irreducible and unable to be contained, Blackness is a way outside the colonial grammar of ‘Man.’