1.
At close range, the size and complexity of The Lady and the Unicorn (c. 1500) is overwhelming. On view in a small antechamber of the Art Gallery of New South Wales, the six tapestries feature variations of the same scene: a pale young woman flanked on either side by a lion and a unicorn, each carrying the heraldic crest of the Le Viste family.

With large expanses of crimson silk and wool threaded with emerald vine, the tapestries broadly represent the five senses: sight, smell, hearing, taste, and touch, with an additional more mysterious panel titled ‘À Mon Seul Désir’. This final tapestry depicts the woman and her handmaid standing in front of a marquee, holding fistfuls of jewels above a casket, presumably preparing to cast away these superficial riches in an act of romantic or religious devotion. The panels are all slightly different sizes, which means that the appearance of the unicorn varies widely between them: it is the size of a large dog in ‘touch’, then almost a rearing stallion in ‘taste’, and a kind of zoomorphic sofa in ‘hearing’. 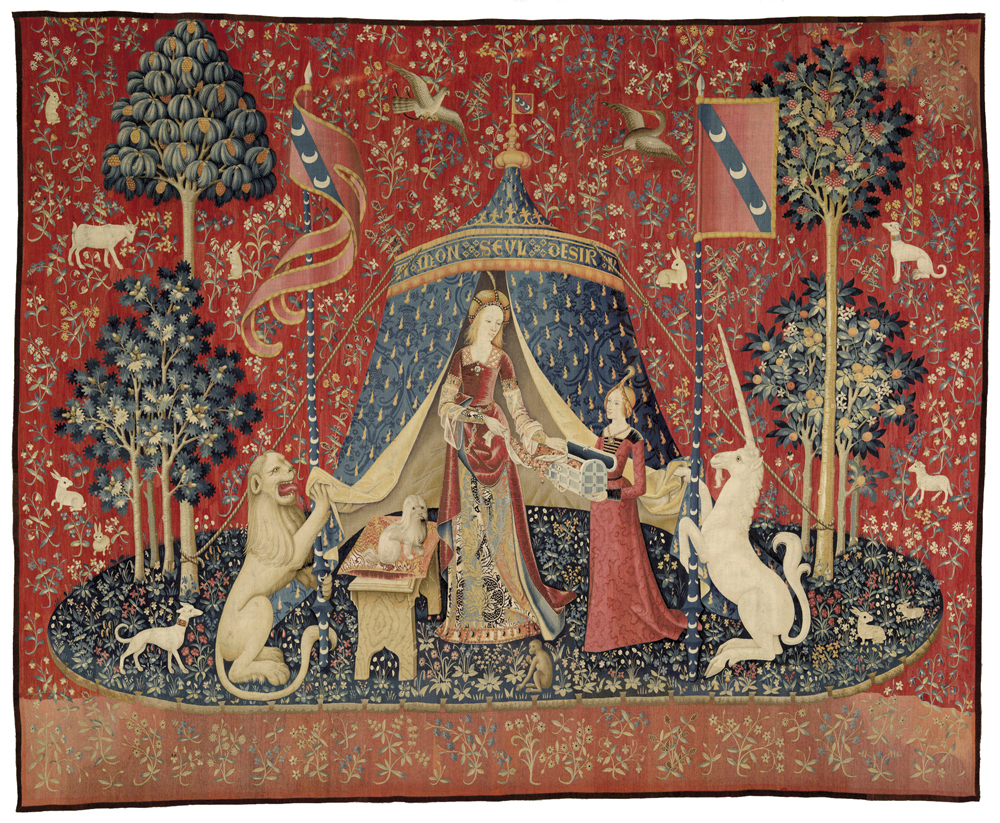 When viewed as a whole, The Lady and the Unicorn is luminous, intricate and surprisingly witty. In the infamous ‘touch’ panel the lady lasciviously encircles the horn of the unicorn between her thumb and forefinger, with the figures in the background rounding off allusions to the remaining basic sexual perversions—there’s a monkey bound in chains, a leopard and hound cuffed in jewelled collars, and various rabbits happily cavorting.

For delicate pieces of fabric now half a millennium old, the tapestries are in excellent condition, but time has been fickle in other ways: the symbolism of the designs is almost entirely indecipherable to the modern viewer.

For a medieval French aristocrat, the flowers and animals strewn across each tapestry would have carried coded meanings, but without a contemporary bestiary, and no understanding of chivalric flower language, the power the mysterious tapestry holds is in forcing us to guess.

Culturally, most interpretations of The Lady and the Unicorn have fixated on the unicorn. Overlooking the lion, the ladies, the lapdogs, and the surprisingly elegant stoats, it is the unicorn that captures the imagination because, as an animal that does not exist, it is given the freedom to represent anything. While clearly seeped in religious symbolism—the unicorn standing in for both Christ and the animal left behind by the ark—the tapestries can also be read as the story of a courtly romance. The unicorn is a chivalrous gentleman immune to seduction from all but the most chaste virgin, but his horn simultaneously represents a beastly cock.

2.
It would be easy to mistake The Lady and the Unicorn for a giant piece of decorative embroidery, but the patterned panels have actually been constructed in one piece. To create the intricate motifs of medieval tapestry, hundreds of individually dyed weft threads in silk and wool are loaded onto small bobbins. These are then carefully looped around each warp thread from one edge of the loom to the other. If you imagine embroidery as the equivalent of paint-by-numbers, making a tapestry is more like using an etch-a-sketch with hundreds of colours and dozens of knobs: thread is delicately spun from one side of the loom to the other, creating a complex image out of individual points of colour.

While not every Medieval family could commission a set of hand-woven tapestries, the fashion for such fabric led to the development of increasingly complicated mechanical looms. Such machines could create ornate floral and geometric patterns, echoing the beauty of their hand-woven counterparts. If, in all its regularity and perfection, the breathtakingly ornate floral background of the Lady and the Unicorn looks mechanically woven, it is because of the subsequent popularity of fabrics mimicking the millefleur style.

Joseph Marie Jacquard’s invention of the Jacquard loom in 1802 automated the process by using a string of wooden punch cards. The holes would dictate which arm of the loom was to be lowered or raised, subsequently programming the patterns to be woven through the fabric. One hundred and fifty years later, IBM used these same cards as a reference in developing the punch cards that were used to program the first computers. 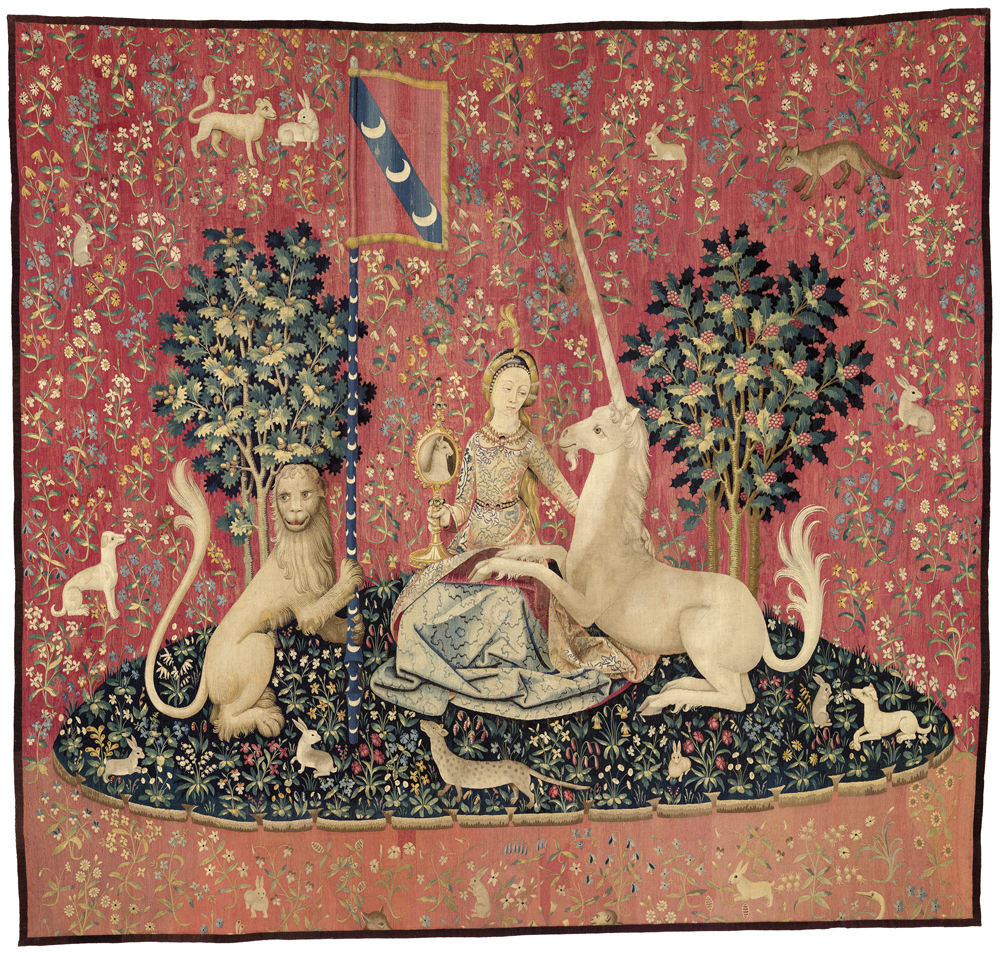 3.
On simultaneous display in the Twentieth Century Australian wing is Arthur Boyd and Peter Porter’s own version of The Lady and the Unicorn (1973-4). As a series of prints and accompanying poems, these works take up the religious interpretations of the tapestries and transpose them onto Australia’s colonial landscape.

Where the tapestries are decorated with medieval flowers and beasts, Boyd’s prints are scattered with more local symbols in stark black and white (a spear, a pot of billy tea, a chicken-wire fence). Porter’s suite of poems is a lapsarian fantasy running the full symbolic gambit: beginning in the Garden of Eden, the unicorn is left behind by Noah, crucified like Christ, and seduced and betrayed at the hands of the maiden.

Porter and Boyd had never seen The Lady and the Unicorn in person when they decided to transfer the symbolism of the medieval French court to dusty mid-century Australia. But just as the makers of the tapestries were ushering in the beginning of a new aesthetic era at the start of the 16th century, when Boyd started preparing his etching plates in 1973, the Xerox Corporation was also announcing the commercial release of the first electrostatic colour photocopier. Like Boyd’s intaglio etchings and aquatints, the photocopier replicated images by the sequestration of negative space. And in that same year, the Xerox Corporation’s Palo Alto Research Centre developed the first personal computer with a cathode ray screen and mouse-directed cursor, heralding the beginning of an unprecedented era of image replication.

Considering the legacy of iconic works like The Lady and the Unicorn, it’s easy to identify the cultural weight of the imagery and symbolism, and to recognise the influence on other artists like Boyd.

But the bright pink unicorn pencil cases and colouring books that clutter the gallery gift shop are only part of the story. Exceptional craftsmanship carries with it an iterative kind of technical innovation that also casts a long shadow.

With the increasing frequency of touring exhibitions such as this, we are given the opportunity to see significant art in person at the same historic moment that our digital access to art has immeasurably expanded. This is a direct consequence of the same kind of technological adaptation that saw brocade looms transform into program code, and copy paper into dynamic digital displays.

The recent Rembrandt and the Dutch Golden Age exhibition, presented the Art Gallery of New South Wales as part of the Sydney International Art series, brought dozens of priceless paintings by Renaissance masters to Sydney. But for those without such access, The Rijksmuseum has now made high resolution photographs of the vast majority of its collection available online, with plans to digitise the entire million item collection by 2020. Not only is the Rijkstudio project one of the earliest and most ambitious digitisation initiatives from a major museum, it is also one of the first museums to provide full public access to its collection.

Download an artwork and you can zoom in to see the tiniest detail, closer and brighter than you could ever hope to see the original. At this range you can view individual brushstrokes, areas of crazing and restoration, but pull in closer and closer and the image eventually fractures into pixels: tiny stitches of light—the tapestries of the digital world.