‘This breath hold this breath let it be held once twice per day and night’, writes Samuel Beckett in his novel How it Is (1961), ‘hold it let it be held ten seconds fifteen seconds try and hear.’ [1] It’s in reading this command, with all its lack of punctuation and repetition of clauses—its insistency on the breath—that you find yourself pausing, holding on as instructed, any further action delayed.

There’s an ambiguity in the idea of the pause: it can mean an interruption, a sudden incursion, a state of arrestment prompted by surprise, but it can also mean a cessation, a stoppage of action, a marker of absence. It is both empty and full, brief and excessive. Referencing Beckett’s suggestion that the pause is the ‘vast will of unmaking’, Karen Black’s solo show Not hours minutes at Sullivan+Strumpf explores the potency of this negative space.

You could say that Black’s works are born out of what Boris Groys describes as ‘excessive time’, the temporal gap or positive opening that occurs in moments of delay. [2] Black has found marks or pauses in previous works, and then represented these in the form of gestural paintings and ceramic vessels. In some instances, Black has excised small sections from previous paintings, zooming in and then repainting these as large-scale close-ups on canvas. The ceramic pieces similarly respond to past works, with painterly ideas repurposed into three-dimensional form. Here Black is extending the minutes, hesitating on particular events and sequences.

The paintings and ceramics themselves are a heap of colours and textures: sunflower yellows, eggplant sheens, dark and velvety blues, pinks that remind me of puckered satin, and a certain fleshiness that comes with streaks of bright red paint being interspersed with flecks of white.

Like the crunch of hot loose gravel underneath the wheel of a tyre, there’s a satisfaction to be found in the thick luscious globules that have affixed themselves to the canvas. And just as Beckett’s use of repetition works to pull a reader back, so too do Black’s drips and folds and overlays encourage moments of pause.

The choice of material is also significant, given that the very nature of painting or ceramics requires an artist to pause during the act of creation (in order to wait for a layer of paint to dry, or for clay to be fired and set). These are works positioned firmly in the in-between: they are fiddly and delicate, and yet, given the swathes of brushstrokes and the level of accretion, weighty in form. 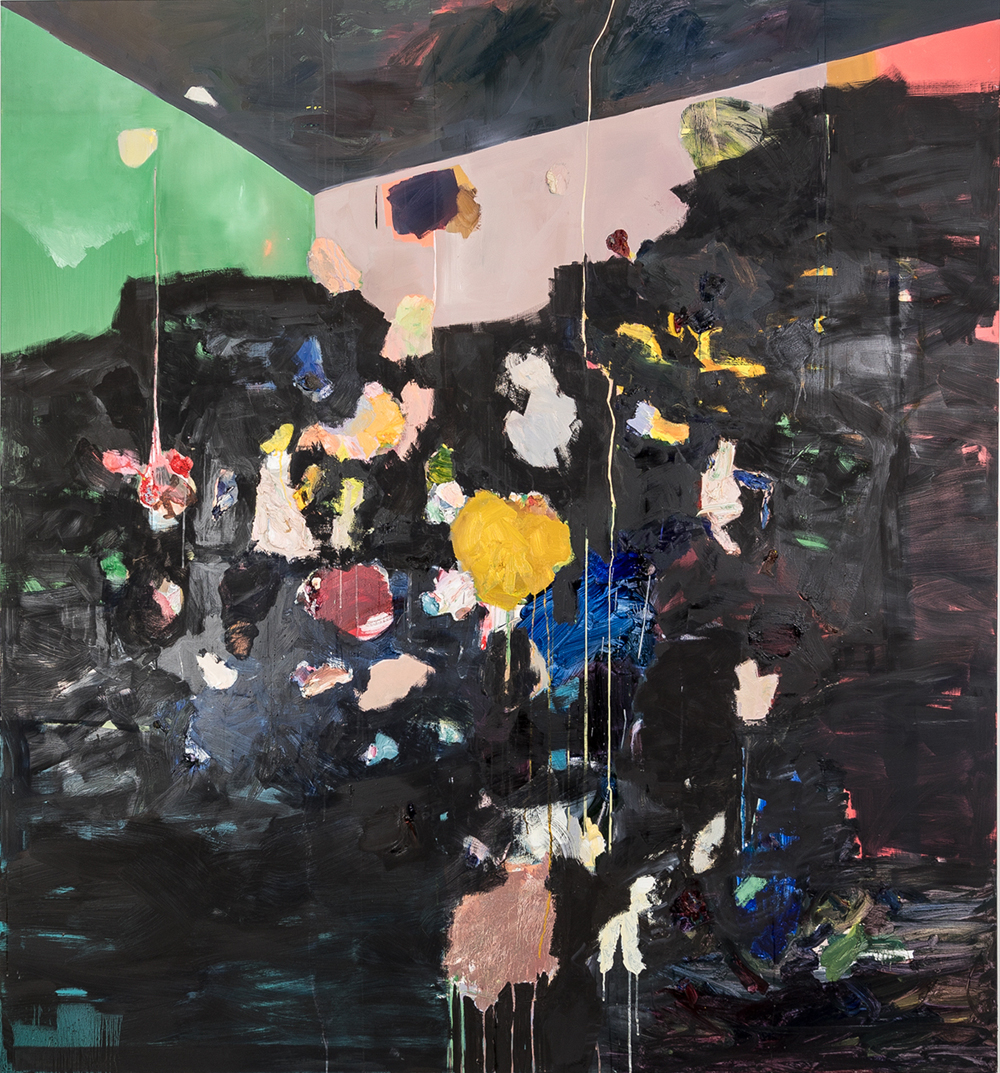 Yet Black also seems aware that the notion of the pause brings with it a multiplicity of meanings—it may be a silence that is full of potential, but it is also a gap that can cut and wound. Think of Emma Gonzalez standing in silence for six minutes and twenty seconds, marking the seventeen victims of the Parkland shooting, the space between 8:46am and 9:03am on September 11, 2001, or the ‘uneasy calm’ that descended on Gaza after Israeli sniper fire. ‘The decision to go to war can be decided in a small pause’, and it can easily be weaponised by the state: there are the bans and delays on immigration, which leave asylum seekers stateless and in limbo (this is a pause that lasts for years not minutes). [3] Black is interested in narratives of resilience and endurance, and the pain that sits on the edge of the pause is evident in the dark blanketing in Painting for a corner (2017), and in the almost-but-never-quite-discernible figures that seem to have been arrested or halted mid-flight.

Two lines, or breaks, have been painted directly onto the gallery walls for Not hours minutes, one in candied pink, the other in orangey-yellow. For Black, these lines are being used in the same way a bar line is used in musical notation.
One of my jobs is to teach primary and high school students how to play the drums. And whenever they see rests or breaks in the music, my students always immediately skip over them, they rush through, trying to get to the rhythm on the other side as quickly as possible. ‘The rests are a part of the piece,’ I say, and they sigh and pout and we go back to the beginning of the bar to count out the rests. It seems to me that in Not hours minutes, Black is saying a similar thing: we must think about the pauses, return and consider them, because they aren’t separate from everything else, they are the tissue in between. ‘You haven’t even begun’, writes Mary Ruefle in My Private Property (2016), ‘You must pause first, the way one must always pause before a great spirit, if only to take a good breath.’ [4]