Megan Monte and Josephine Skinner mark one year at the helm of Cement Fondu with The Ropes, an exhibition that brings together the work of First Nations artist/choreographer/performer Amrita Hepi and American conceptual artist/philosopher Adrian Piper. Alongside The Ropes is an exhibition of contemporary woven sculpture by the Yirran Miigaydhu Weavers.

Placing these three practices in close proximity establishes a dialogue between First Nations Australian and New Zealand artists, and African American practitioners. This dialogue is driven by a consideration of the power of artistic practice to elicit change. It is an embodied conversation, the racial politics of which are not spoken, but communicated though movement: hands that translate the traditional knowledge of weaving, feet that walk a slack-line, and bodies that dance to funk music. As Monte and Skinner suggest, ‘Piper and Hepi’s practices bring into focus a cross-generational, Black feminist tradition.’1 They describe the pairing of Piper and Hepi as a kind of ‘showing of the ropes’, a call back to the jump-rope-skipping in Hepi’s work ‘The Pace’ (2018).2

It’s the inherently political nature of movement that is the subject of the dialogue between Hepi and Piper’s practice. As Larissa Behrendt noted during the artist talk, given ‘the history of the control of aboriginal bodies and movement, there is something subversive about [a First Nation artist] using dance.’ The demonstrative confidence of Hepi’s ‘The Pace’, and the gleeful expression on Piper’s face in ‘Adrian Moves to Berlin’ (2007) epitomises this subversion. 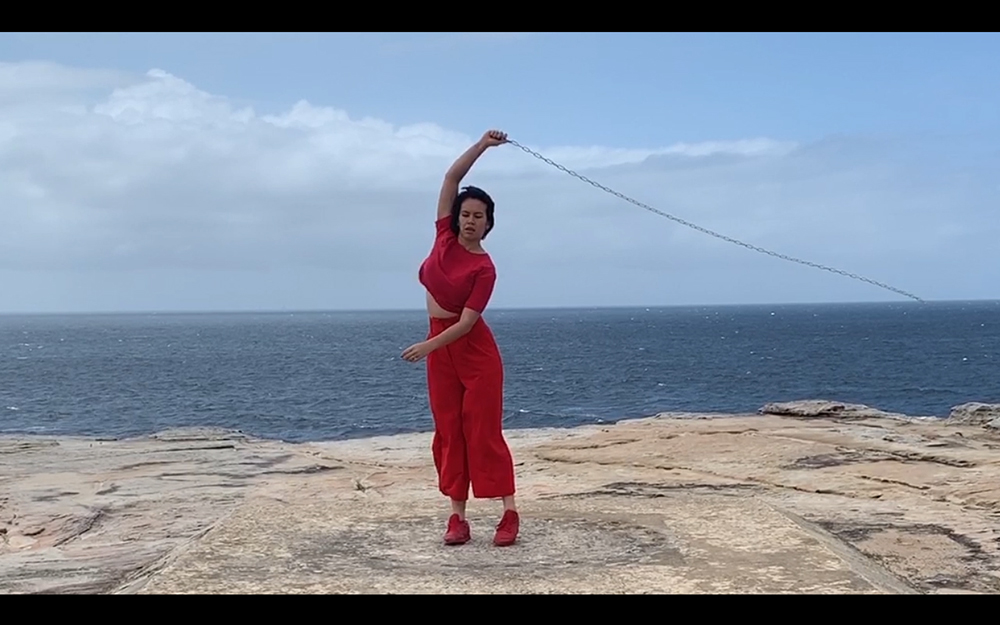 ‘The Pace’ continues Hepi’s interest in embodied histories: ‘a physical conversation about cultural ownership and authorship’ in which the body ‘acts as a point of archive, memory and resistance.’3 The three channel video work juxtaposes archival footage with that of the artist performing. As the footage pulsates on the screen, the motif of the rope comes into focus: we see a close up of brown legs jumping rope; the rope of a horses bit; hoses filled with water so powerful they lift up a small car; a jet of water used to dismantle protest; the slack-line on which a female performer teeters; the synchronised jump rope of children in a basketball stadium; the rope bound to the feet of a naked bungee jumper; the oxygen line sustaining an astronaut; a rope of chain animated by the artists; and the whip of Xena: Warrior Princess.

As the images accumulate, the rope morphs into a weaver’s thread—we see the dewy outline of a spiders web; the face of Arachne, the masterful weaver from Greek mythology; the weaving of an adornment with colourful wool; the sewing of a weave into the hairline of an African American woman; and a woven fluorescent pink rope held by a blue-finger-nailed hand.

These images assemble a narrative around the power and pressure that is exerted on and by the body, in particular the brown or black female body. And, in doing so, ‘The Pace’ illustrates an enduring resistance to dominant forces, a resistance that continues to see people lay their bodies on the line in order to effect change. When asked how she feels about the ability of her work to enact such a change, Hepi answers that making is ‘proof of continuation of culture’, a contemporary extension of traditional lines of enquiry that go back many millennia:

The process of making is important in documenting very small change happening over time. I think there is so much within the personal narrative [that] it becomes part of the universal for people.4

Adrian Piper’s practice is also grounded in just such an embodied form of activism—one that playfully fucks with identity politics as a self-described ‘white passing’ African American woman.5 Piper, a first generation conceptual artist and philosopher, is only now receiving the recognition that her white male compatriots have enjoyed for decades. Drawing from her embodied experience of existing ‘between cultures’, Piper uses movement and text to subvert, unpack and upend racial and gender stereotypes.6 The Ropes incorporates three of Piper’s most significant videos: ‘Funk Lessons’ (1983-84), ‘Please God’ (1991) and ‘Adrian Moves to Berlin’ (2007). For this exhibition, these videos are presented with silent disco headphones, emphasising Piper’s invitation for us to move together. 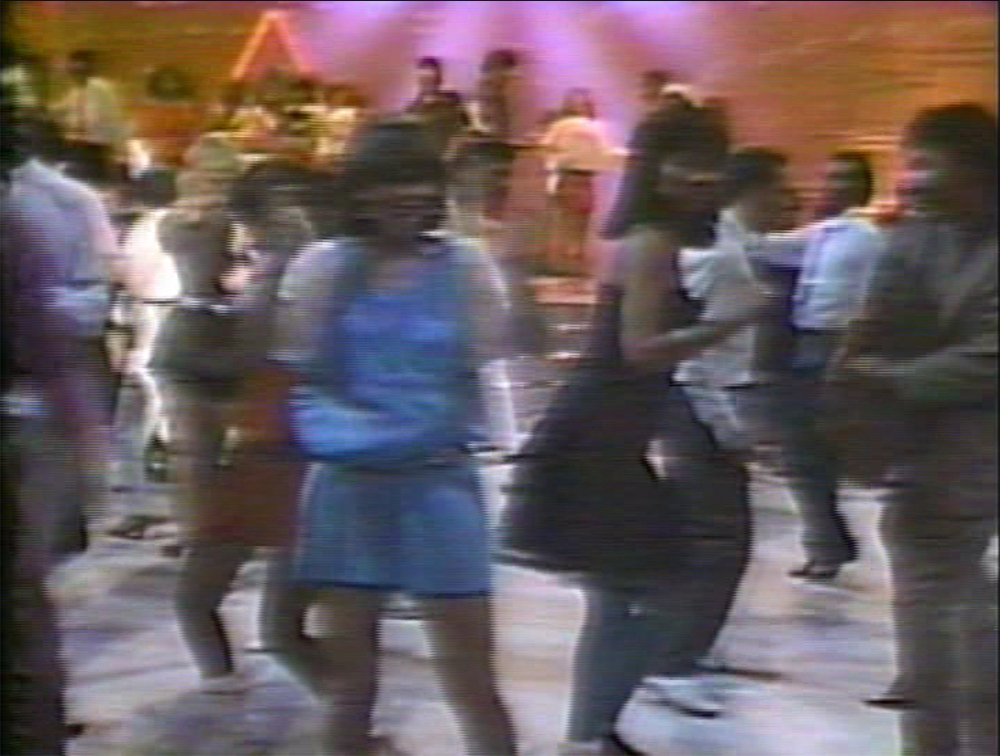 This invitation is most evident in ‘Funk Lessons’, a video that documents an early example of participatory performance—over two years Piper taught white audiences in America how to dance to funk music. Here Piper defines the function of funk music to her pupils as a ‘collective and participatory means of self-transcendence and social union in black culture’, something that Piper postulates as absent in ‘white social dancing.’7 Although it invites the audience to ‘GET DOWN AND PARTY. TOGETHER’, suggesting that everyone ‘LISTEN BY DANCING’, ‘Funk Lessons’ also draws the audience’s attention to their position in the unattributed appropriation of black culture.8 By making explicit the function and elements of funk, Piper (re)claims the genre for black culture. On a personal level Piper describes ‘Funk Lessons’ as:

[A] chance to affirm and explore the cultural dimensions of my identity as a black in ways that illuminate my personal and political connection to other (more identifiably) black people and celebrate our common cultural heritage.9

In ‘Adrian Moves to Berlin’, the artist dances her way into the rhythm of the city: a city she ‘escaped’ to in 2005 and still calls home, refusing to return to America, even for her 2018 MoMA retrospective. Rumours abound, many cultivated by Piper, as to her reasons for leaving the US.10 These range from opposition to the Bush administration, personal racial vilification, to institutionally sanctioned threats on her life. Whilst she acknowledges the political swing to the right in Germany, Piper describes it as ‘a role model for every country…particularly for the US’.11 She proposes that Germans have gained a self-reflexivity post World War Two that has bred a ‘sustained cultivation of historical memory [that] enables it to steer its future course more wisely.’ 12

Piper describes how Berliners have reckoned with their past, unifying the East West divide though the underground dance parties that people have attended since November 9, 1989. As Ben Gook notes in his essay on the rise of the Berlin Techno scene, and its relationship to the fall of the wall, ‘the clubs offered—and still sometimes do—a respite from the cultural, political and economic battles outside.’ This dance scene introduces the language of ecstasy and joy, which attempts to transcend political views, race and gender—a language that is evident in Piper’s invitation to ‘GET DOWN AND PARTY. TOGETHER.’ 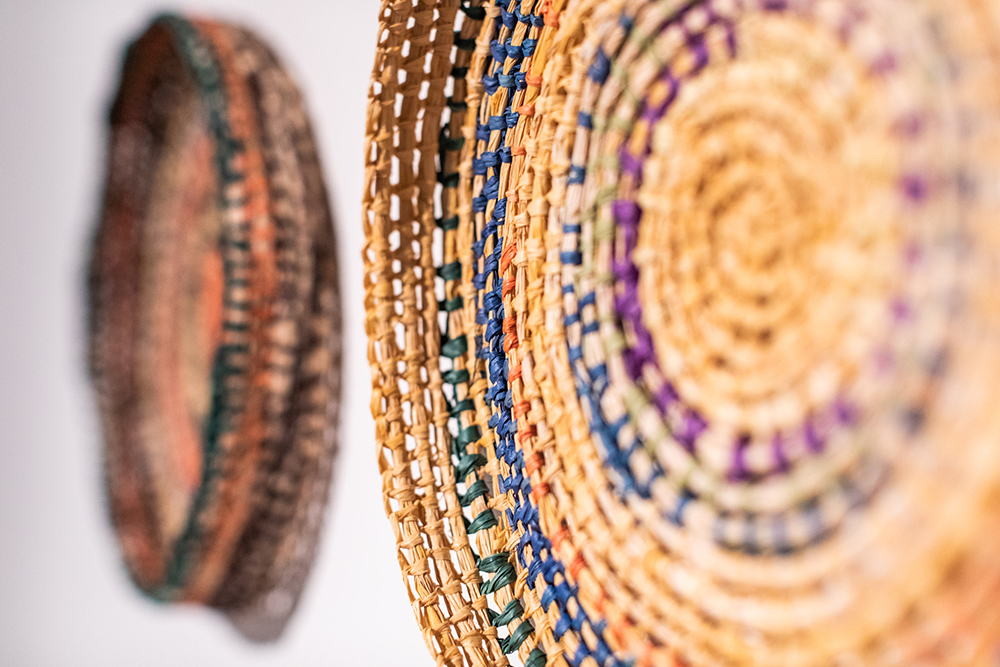 Aunty Phyllis describes the act of weaving as analogous to ‘the way women hold community together.’13 For this exhibition, their work extends the method of coil making to explore the significance of the circle, particularly its symbolic references to creating, sharing, and sustaining community.  The weavers have utilised locally grown and harvested fibers and yarn, creating two-dimensional woven circles that fill the space with vibrating colour. In the corner, voluptuous three-dimensional sculptures hang from the celling.

The curatorial approach of placing The Ropes and Yirran Miigaydhu Weavers side by side speaks to a national and international movement to ‘decentre’ or ‘decolonise’ the art institution. Regrettably, these ‘radical’ moves are not always culturally sensitive; it takes care to begin to understand how we might address the racism embedded within the structures of the art world.

However, Skinner and Monte have managed to avoid an exhibition that feels disingenuous. The voices of Hepi, Piper and the Yirran Miigaydhu Weavers lead the conversation, and the exhibition appears to be imbued with an effort to effect change on an institutional level. That is, the three practices come together at Cement Fondu in such a way that entangles and complicates the politics embedded in each work—whether that be the necessity to de-colonise art spaces, to fight against the oppression of First Nations people, or to reiterate the strength of ancient traditions.

What is being asked of us, the audience, is not only to listen, but also to move, and be moved, in an act of joy and solidarity. For those still unconvinced by the potential for artistic practices to effect change, Piper preempts the imagined cynic with characteristic fervour:

I would ask them whether they think Rosa Parks’ inaction, of simply sitting there in her seat on the bus and refusing to move did much in terms of resisting oppression and transforming racist attitudes…If emulating what Rosa Parks did on her way home from work is too much for them, then they have no right to complain that art does too little.14