This text is in dialogue with the exhibition Autumn Almanac at KNULP, and is the next instalment in RD’s feature series of paratextual responses.

Imagine a library as wide as it is tall, as deep as it is wide, with narrow corridors in between the shelves, all of which are packed tightly with books. This was how it was inside Goulds Book Arcade, the book emporium that in 1989 moved to a warehouse at the start of King Street, Newtown, in Sydney’s inner west, where it operated for almost thirty years. Goulds’ huge scale and cluttered interior made it seem alive, a cumbersome organism animated by the immense collection of information it contained.

Looking down onto it from above, I can comprehend its immensity in a glance. As if I am Gulliver in Lilliput, I peer down over the book emporium, which has been shrunk down to the size of a box, neat enough to fit on a table-top. My gaze travels through its labyrinth of shelves and staircases. Now, rather than pause at the entrance to behold the edifice of books inside, I have a bird’s eye view of it, and a sense that its vastness is within my grasp.

A library compresses many worlds into its collection, as within each book a world can be opened out.1 Seeing the bookstore at model-scale, I imagine the information contained within it could be similarly shrunk down, a million books condensed into a form which I could understand as easily. Such is the elusive dream of the information age, and one which has been complicated, rather than remedied, by digital devices. The phone in my pocket is a neat portal to an overwhelming expanse of information. 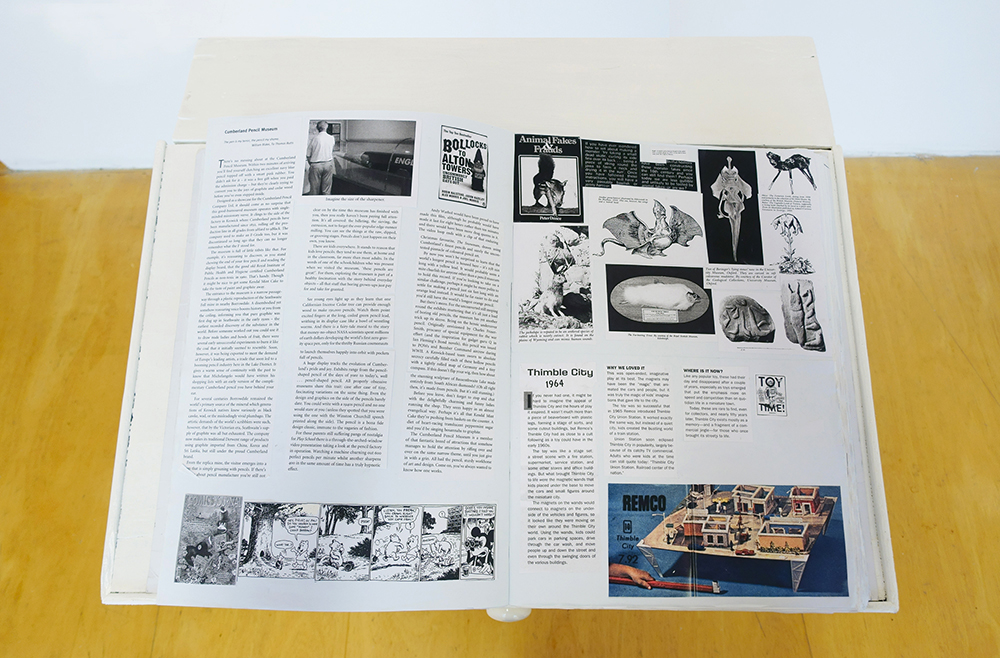 Beside the Goulds model is a large book with a worn, black cardboard cover, which has the appearance of a much-consulted book of spells. This is the Almanac, a book-of-books, a collection of esoteric knowledge gathered over a lifetime. It is a magician’s guide and an inventor’s notebook, a kind of Whole Earth Catalogue for obscure and miscellaneous facts, and technologies and ideas that might otherwise never be encountered, nor be presented side by side.

I open the Almanac and turn through its pages. Each is a construction of photocopied excerpts, arranged so no space is wasted. One of the first pages includes excerpts from a book from 1922, Mazes and Labyrinths, and the Almanac itself is a kind of cyberpunk info-maze. It passes through automata, teleportation, Gulliver’s Travels, the history of the umbrella, talking birds, paperback book covers, the struggle to make a realistic tornado in The Wizard of Oz, rock formations in Cappadocia, hibernating frogs, Victorian inventors, Brion Gysin’s Dreamachine, the Elliot Wave principle, and on and on through unpredictable territory.

If reading the almanac was akin to travelling through a landscape, it would be a journey that one moment was snow and ice, the next mountains, the next desert, the next a forest, the next the floor of the ocean with the strange creatures of the deep for company.

The Almanac is a collection, a remix, an encyclopaedia, an adventure among archives. An unruly book, it makes connections across time and space. It resists a neat, linear order to its information, yet condenses it in a way that makes it seem active and useful: a maze that teaches you how to navigate it as you progress through it.

The Almanac reminds me of how sometimes, when I was in Goulds Book Arcade, I liked to imagine it existing as a sanctuary amid an otherwise-ruined, post-apocalyptic city. In this dream it was miraculously unaffected by the surrounding disaster. It would be in here I would live, like the old man living in the ruined Senate Chamber in Logan’s Run, surrounded by thousands of books and dozens of cats. Over years I would find, among the texts, information that might assist me in rebuilding the world, and compile it together. The disaster is yet to happen, but the compilation already exists: the Almanac, full of the potential to imagine life otherwise, anew.