There’s a charming absurdity to many of the individual pieces that make up Heidi Axelsen and Hugo Moline’s The Visitors, a deceptively simple installation on eco futurist themes. There’s footage of a sapling being carried along a country road in a backpack like an infant in a baby carrier, a porous net veil that enables exhaled carbon dioxide to be shared between one person and a specific plant, and an elaborately engineered copper funnel for collecting urine to water the roots of trees.

Axelsen and Moline are co-directors of MAPA (Moline Axelsen: Public Art/Participatory Architecture), a company that focuses on creating site-specific art, architecture and model infrastructures. Each of these distinctive projects urge audiences to reconsider and engage with the political assumptions inherent in the civil environment. For The Visitors, the artists draw attention to our parasitic dependency on plants, which fuel or directly constitute the basis of almost everything we eat, wear, and build.

Given that the impact of industrial development on the Earth’s ecology and climate is already fast jeopardising human life, it is remarkable that so little progress has been made in assigning accountability for care of the environment. This is the foundation of The Visitors’ manifesto: that society must urgently start prioritising the needs of plants alongside our own. Such a belief is framed by an understanding that while we cultivate plants extensively for our own survival and prosperity, this is currently done only in the service of human convenience, and largely at the expense of biodiversity and sustainability.

In suggesting a response to environmental degradation that is not human-centric or entirely logical, the artists challenge the viewer to invent their own solutions. And while the incongruity of some of the prototypes brings a sense of levity to the work, at the same time, the rough-hewn construction of these devices suggests a post-apocalyptic future where careful cultivation of plant life will be a daily necessity.

Some objects in the show emphasise these darker connotations, such as a transparent puffer vest filled with soil and seeds, which looks a little like a vest of explosives. While one of the video projections explains that the intended use of the vest is to collect and immediately germinate seeds, the garment could equally be used to shroud a corpse that would decompose and fertilise the growing sprouts. A flag embedded with a transparent panel of seeds similarly alludes to the decay of human ephemera and the capacity of plants to overgrow the monuments of human civilisation.

A manual for The Visitors is available for a coin donation, printed in faint sepia on a large thick piece of recycled paper. The front of the manual describes the use of each of the exhibition’s objects, and the back depicts a map of Katoomba that uses plants and parks as landmarks. Alongside a handful of gold coins in the honesty box sits a scattering of seeds, alluding to an economy based on different values and currency. 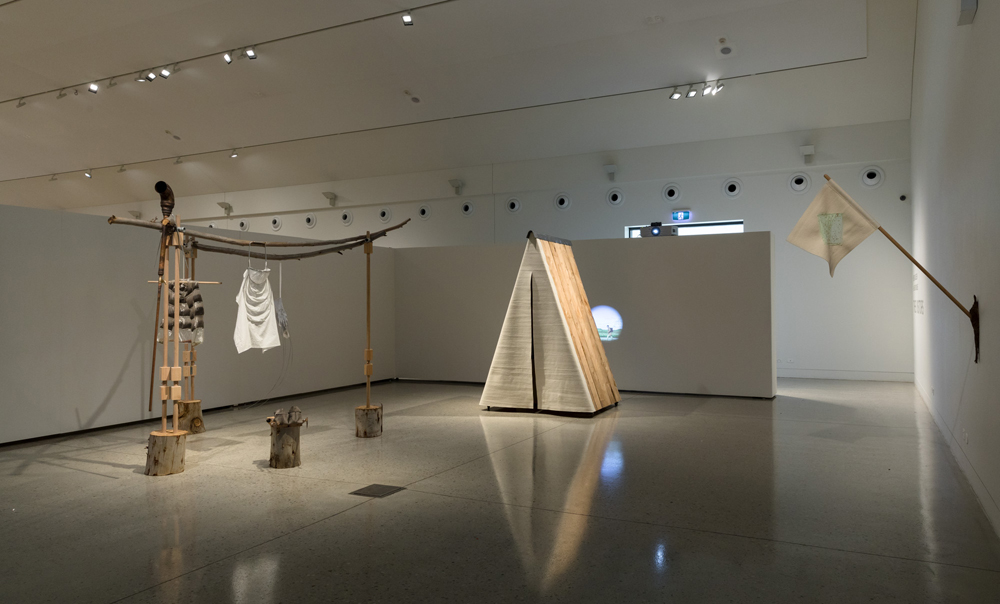 The work plays with two ideas of transience, with the visitors of the title referring both to people, in the suggestion that humans can act literally as agents to give plants a fuller experience of the world (acting as a travel agent, for example, by putting a tree in a backpack and taking it for a walk), and in emphasising that humans are only temporary inhabitants of the earth. This second connotation, emphasised by some of the work’s darker design concepts, also points clearly to the reason why we are often so keen to turn a blind eye to the waste and pollution that our culture creates. Thinking about the disposal of human detritus forces us to confront not just the abstract concept of death, but also the brevity of human civilisation within the vast expanse of geological time.

Whilst The Visitors acknowledges the impending environmental crisis, the installation remains devoid of a level of cynicism or despair that would otherwise overwhelm such a work on ecological stewardship. In a gallery overlooking the dramatic expanse of bushland stretching between the Jamison and Megalong Valleys, Axelsen and Moline’s commitment to empathy and service offers agency and hope for building a better relationship with the natural world.