From a distance Katharina Grosse’s installation painting at Carriageworks looks a bit of a mess. Swathes of canvas draped floor to ceiling fill almost half the length of the decommissioned railway site. Mostly white, with seams showing, sprays of colour emerge from the folds. Closer, these shapes become more intriguing.

There are slits through which you can enter, and it is inside that the work comes into its own. It’s a feat of rigging, with the points in the truss asymmetrical. Knotted here and there, the drapery creates a sort of theatre. The paint is applied heavily, apparently by a team of twelve, with Grosse’s signature spray guns. Primary and secondary colours dominate, in sweeping diagonals. Apart from the occasional clearer line, signifying proximity, a hand’s action in the production of the painting is barely apparent.

It’s fascinating to watch the time-lapse video of the painting process. Sped up, it’s impossible to see who does what. What strikes me is the sense that the painting should have stopped earlier. There’s a point before the ending of the video when the space leaps with light and complexity, and this feeling is absent in the finished work. The entire floor becomes a greenbluebrown blur, with swathes of the walls lacking in depth and articulation. Grosse often cites the kaleidoscopic and chaotic potential of colour, but in many places The Horse Trotted seems overdone, impenetrable, heavy.

People wander through, selfieing, supervising kids, who rightly interpret the work as a giant playground. There are recesses naturally formed by the drapery that make comfortable seating, and Grosse’s Gagosian gallerist’s instruction to the audience on opening night, ‘Don’t touch the work’, is thankfully risible. This is the best aspect of The Horse Trotted Another Couple of Metres, Then it Stopped (nah the title’s not supposed to make sense, it’s about random moments, the epiphanies they may contain). 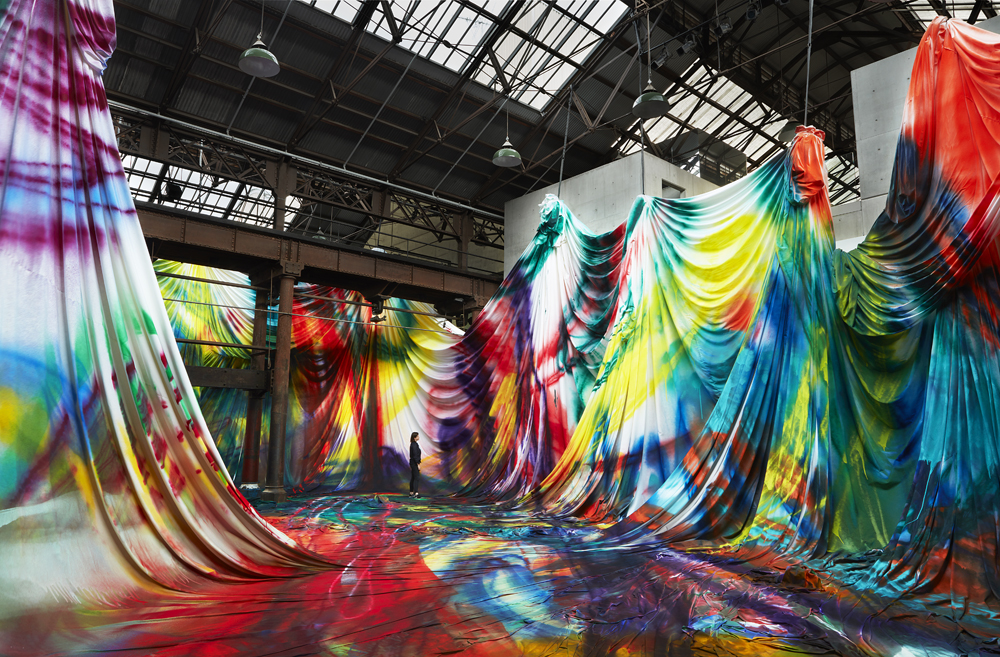 The rectilinearity provides good sight-lines, but in other ways it’s limiting: the dual pylon structures in the middle of the space are left free. I remember local artist Cigdem Aydemir’s work in here five years ago, when she used several hundred metres of black fabric to dress a single plyon and the corridor beyond in a niqab-like structure, suggesting a pair of legs you were compelled to walk through. Sculpturally, I think that work was more successful.

Grosse has used 8000 metres of fabric that feels heavy as sails, and is naturally fire-proofed. The conversation about what happens to the materials we use in art isn’t very loud lately, despite our laments about waste clogging the planet. But I’m sure Grosse had to jump through umpteen public safety regulations—Sydney being one of the hardest places in the world to make public art.

Carriageworks’ claim that The Horse Trotted ‘responds directly to the architecture’ isn’t really true, and isn’t really Grosse’s fault. Usually painting directly onto walls, buildings or other structures, she was no doubt instructed to not spill a single drop of paint. (Back to the time-lapse, we see the areas behind the drapery covered in plastic to protect the old steel and bricks from paint — hundreds of metres probably.) In the necessity to create her own surface, Grosse’s decision to use fabric is ideal.

I appreciated nearly tripping over a few times. Not enough danger in art these days. I became quite kittenish and couldn’t resist grabbing my friend Yiorgos through the drapery as he navigated a corridor between the folds near the exit. Take the kids. It’s fun.