Then
adverb
1. at that time; at the time in question.
2. after that; next; afterwards.

Marking White Rabbit Gallery’s tenth anniversary, Then is an exhibition showcasing contemporary Chinese art acquired by Judith Neilson between the years 2000 to 2010. It’s worth noting that every artwork in the White Rabbit Collection has been made after the year 2000. Artist Wang Zhiyuan (who previously worked with Neilson and the White Rabbit Collection up until 2014), takes the year 2000 as the symbolic starting point of a new trajectory in Chinese contemporary art.

Just as China’s national and economic power—both at home and on the international stage—has grown since the beginning of this century, so too have Chinese contemporary artists altered how and what they engage with in their artistic practice. Since the economic reforms of the early 1980s, the country has expanded rapidly, whether via its centralised global economy or international diplomacy and trade. In tandem, Chinese contemporary artists have diversified away from earlier socio-political preoccupations, turning their attention to global anxieties and antagonisms: wealth inequality, consumerism, politics, warfare, and technological advances.

By presenting a record of the 2000s, Then extends itself as an archive. The retrospective exhibition is transportive in that it reminisces on a nation embracing new visions and ideas, while also encouraging us to consider this body of work through the looking glass of the present. Viewing these works together suggests the underlying tension between preserving China’s history of strong cultural traditions and acknowledging its militarisation, globalisation, and Western influence. It becomes clear that what preoccupied these artists in the first decade of the 21st century were ideas pertaining to bioethics, materialism, money worship, and the global tussle between communist governance and democratic principles.

Now fossilised in the stratum of White Rabbit’s floors, these works facilitate a dialogue that reacts in symbiosis of the ‘then’, the ‘now’, and what may come ‘after’. Then addresses how these concerns can be revisited—re-imagining the White Rabbit Collection as a series of distinguished time periods to be explored and scrutinised.

For me, the 2000s was a decade of childhood and pre-adolescence. I was unaware of the complexities that my adult self now grapples with. Back then, summertime meant spending the school holidays lying on the trampoline, catching tadpoles in the pond, watching the sun hide behind eucalyptus trees as kookaburras sang, seeking shelter inside as my mother hand-made roti for dinner. Forgetting what day it was; forgetting what time it was. Making my way between the floors of White Rabbit in the small lift, I find myself elevated in a microcosm of the 2000s. I am a futuristic visitor in a time-machine, travelling through the layers of bedrock in a reflective fast-forward. 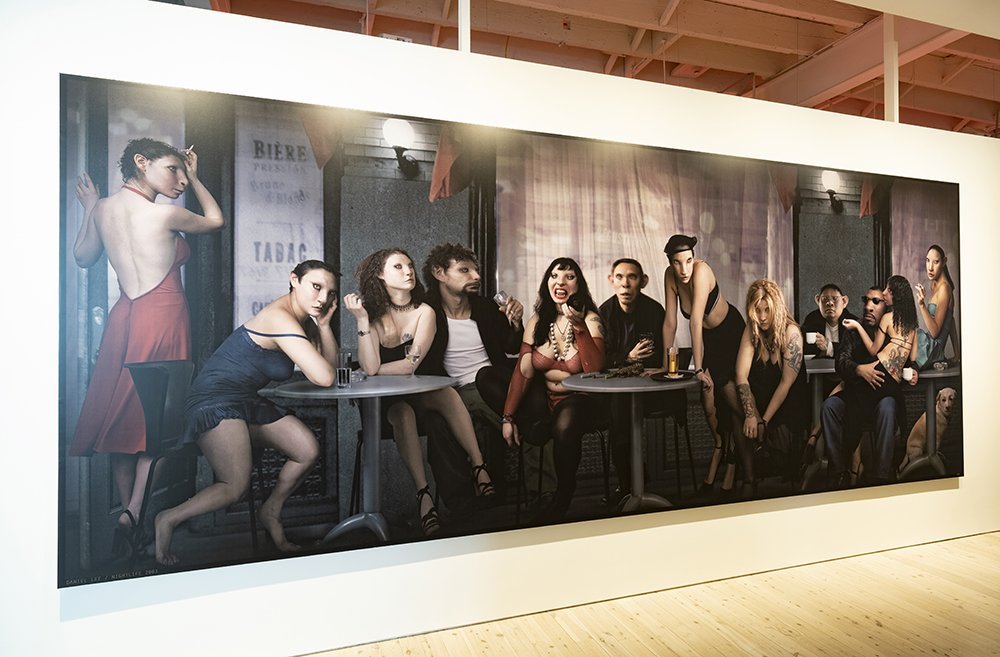 Stepping out on the first floor, I discover Daniel Lee’s ‘Nightlife’ (2001), which guides me to turn left. For this work, Lee references a real bar in his New York neighbourhood, but re-imagines this familiar place as inhabited by unfamiliar beings. Human-animal hybrids pose outside this bar, congregating together and indulging in elixirs in the form of coffee, alcohol and cigarettes. These bodies are imagined, developed out of Lee’s interest in evolution and the influences of the Chinese zodiac and spirituality on daily life. I try to move swiftly past this work. To keep my eyes ahead. To keep them on the ground. I try not to engage, but I falter. I am unable to ignore these curious beings. Their intimidating eyes glare out from the wall.

In an interview with Peril in 2010, Lee comments: ‘in my work, I took a small step to predict the future, and what we would do with our fellow animals. Modern technology allows humans to do many things, like changing DNA and body organ transplants. There is greed…humans need to live longer.’ Meditating on this work in a contemporary context, where genetic engineering in China is gaining precedence, Lee’s mural presents itself as a cautionary tale for what may come afterwards. In this space, I’m invited to consider the work in a new light—as a proposal of a future, almost dystopic, world from where I stand now.1 Who are they? Are these hybrids a result of former inter-species relations and/or genetic engineering? Do humans and hybrids co-exist in this world? A small dog-like creature with a face resembling human features sits obediently underneath the table to the right. Its gene-manipulated body has kept its animal form—is this a reason for its perceived subordinance when compared to the others? What class divides and sociocultural conditions exist in this world? Perhaps this is a stage in the evolutionary track—a survival of the fittest. These beings have adapted to environmental degradation, climate change, increased urbanisation and pollution, taking on the forms of humans, seeking refuge and protection in city bars. 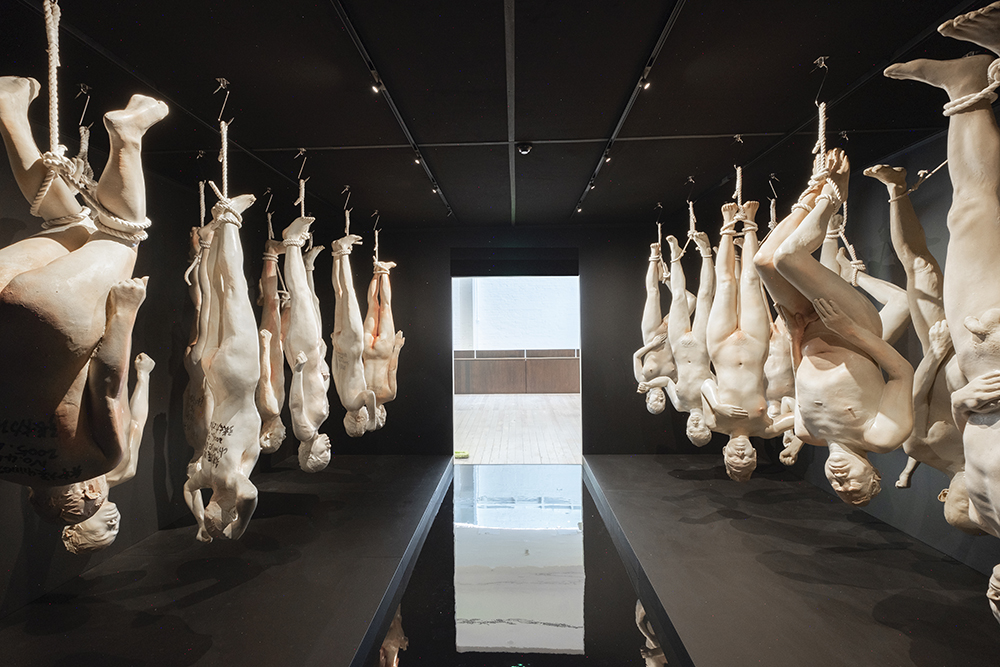 Moving through the first floor feels like being propelled in a nauseating fast-forward. Casts made out of the bodies of rural migrant workers hang like meat in an ageing-room. I walk past schoolchildren doing calisthenics exercises. The choreography catches speed before they become disoriented, laughing amongst themselves. I am struck by neon pink lights. Military uniforms. Engorged bodies bursting with pearls and jewels. Consumerism, materialism, globalisation, recreation, entertainment, are all satirised as excessive. Sirens. Screams. A man has died. Grey. Observing the replication of a cramped home in the city outskirts and shanty towns. I am a giant, peeping through a microscope after a night of gluttony.

I find a moment of reprieve in the elevator. Chang Xugong’s ‘Embroidered Portrait Series: President George W. Bush + Embroidered Portrait Series: Premier Wen Jiabao’ (2005), seems, on the surface, to bridge the turbulences of war with the political divides of East and West. There is a façade of a ‘get-rich-quick’ mentality, and fanatic consumer activity, which is epitomised by the presence of two smiling leaders. Bush hints to Jiabao with a side-eyed gaze—a body language that suggests follow me. When viewed within the context of China’s economic reforms, and the country’s decision to join the World Trade Organisation, we can see that Xugong is ridiculing the polished optimism of economic liberalisation and China-US trade relations. Both leaders are dressed in Red Tang suit jackets, surrounded by emblems of roses and fast cars.

As I move to He Yunchang’s ‘One Metre of Democracy’ (2010), the rose-tinted promise of more fast cars, more neon lights, more pearls, more jewels, fades. In this performance, Yuchang presents his proposal of the artwork to a group: to have a one-metre incision cut into his right side, 0.5-1cm deep, through a pseudo-democratic voting process. Out of a group of twenty-five people, twelve vote in favour of the proposal, ten vote against and three abstain. Yunchang is filmed while being cut open without anaesthetic. I watch as one metre of human flesh is sliced from collar bone to knee. Those involved in the voting process watch as the surgeon willingly performs the task. Yuchang moans in agony and pain, the white hospital bed becoming a bloody mess. No one intervenes. Where does power lie in this pseudo-democratic process of majority rule? Yuchang’s performance further scrutinises the movement of power in such a process. During the performance each party has the power in their hands, but only temporarily. It is the surgeon and their scalpel, the system in place for the execution of the proposal, that upholds the pseudo-democratic decision as sacrosanct, while the voters become passive bystanders. In our contemporary hyper-connected world with instantaneous communication, we are now critical of democracy, navigating the tensions of Brexit and Trump, and waiting until election days to have our input heard. In the interim, the power of the people in the decision-making process is dismantled. We become bystanders to the system. I watch Yuchang’s body being sliced open. I watch as the price paid in the name of democracy is self-mutilation and bloodshed. 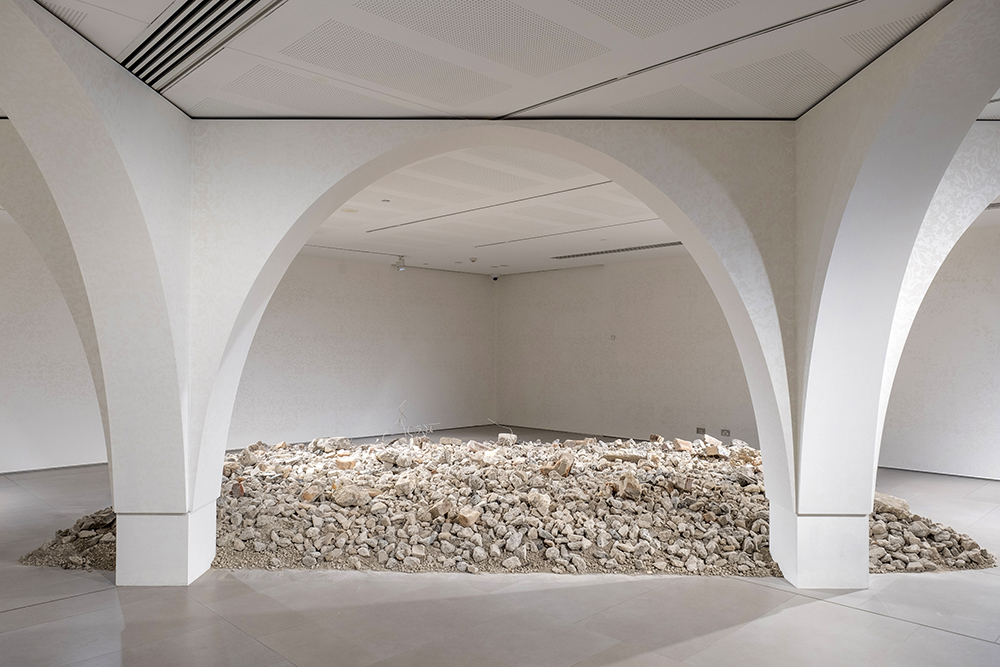 Xu Zhen’s ‘Calm’ (2009) claims the upper floor of the gallery. The scale and complexity of this installation demands us to reckon with the continuing violence and human tragedy occurring in the Middle East. As I enter the space, there is a sense of emptiness, despite a large area of the ground having been covered in concrete rubble. Assembled over a water bed, these rocks rise and fall. It is a heavy, condensed mass that pools with weight at the centre of the floor. This heavy feeling replicates itself inside my chest, pulling at the pit of my stomach. I strain my eyes, quizzical that this may be an optical illusion. I try to pinpoint where exactly the air rises and falls. These sporadic moments for breath are not gasps for air, rather these breaths are gentle and rhythmic. Am I witnessing a pre-eminent death? If I hold myself in this space for long enough, perhaps I will witness the last breath.

As I stay with this work, I question the source of its anonymous breathing: is it the bodies of civilians caught up in the devastation of war and terror? Or is it the earth that is now left, abused and forgotten, underneath the rubble of buildings that had once marked industrialised and inhabited spaces? Wars devastate land, too. Slow breaths break my silent consideration of what it is that has fallen. There is no medical aid for the earth that breathes underneath the rubble. Will the tensions of the socio-political climate explored on the floors below erupt to the surface? Like a volcano, the walls and roof above that now encase me could fall and everything could be destroyed. Will the toxic soil erode the layers of bedrock that is now beneath me, poisoning from the inside out? I imagine the floor crippling and collapsing into itself. Falling back through the layers beneath, being swallowed into a sinkhole. My footsteps are slow and cautious as I pace around the circumference of this breathing matter. A matter that is not quite human, not quite nature.

Now, I am unsure of where or how to move next as I find myself at an end. ‘Calm’ (2009) is positioned as this endpoint: an intercept in the chronological timeline; an imagined space where the 2010s will continue the trajectory of time. The ‘then’ of the 2000s has been recalibrated for the turn of another decade, skipping a beat, to a point in time where I can reflect both in retrospect of what was and what is now.2

An earlier version of this article misstated Wang Zhiyuan’s ongoing involvement with Neilson and the White Rabbit Collection.