Twelve screens arranged in single file around the gallery space display scenes from Tokyo. One shows a woman walking her dog in a park, the next a swing set, another an almost-still image of flowers in a vase. Some are instantly recognisable as Tokyo’s urban landscape; others are just everyday objects – the mundane and the discarded – an office chair, a table, a fish tank.

In the far right-hand corner sits an upright piano. The notes of Claude Debussy’s Clair de Lune (1905) are playing out into the room, but the performer is conspicuously absent. Unseen hands are depressing the keys, turning the instrument into both a Chaplinesque novelty and an uncanny object that insists on its own autonomy.

It’s a little disorientating standing in Masaharu Sato’s multi-channel video installation ‘Tokyo Trace’ (2015), like finding your balance in a mild ocean swell. Through his distinctive practice of tracing, Sato has augmented the reality on the screen, but only slightly, adding subtle and sometimes barely perceptible animations. Tokyo Trace 2, curated by Denise Thwaites, recontextualises Sato’s previous iteration of the work at the Hara Museum of Contemporary Art by placing it in an Australian gallery. And in doing so the exhibition adds another indentation, another map, onto the installation.

The narrator in Chris Marker’s documentary San Soleil (1983) speaks of ‘the faculty of communion with things, of entering into them, of being them for a moment. It [is] normal that in their turn they should be like us: perishable and immortal.’ Through the act of tracing, of marking onto the video-documented image, Sato enters the world of his subjects on the screen. Once animated, they move from the realm of the everyday into the marvellous – they become present and absent, weighty and illusory. 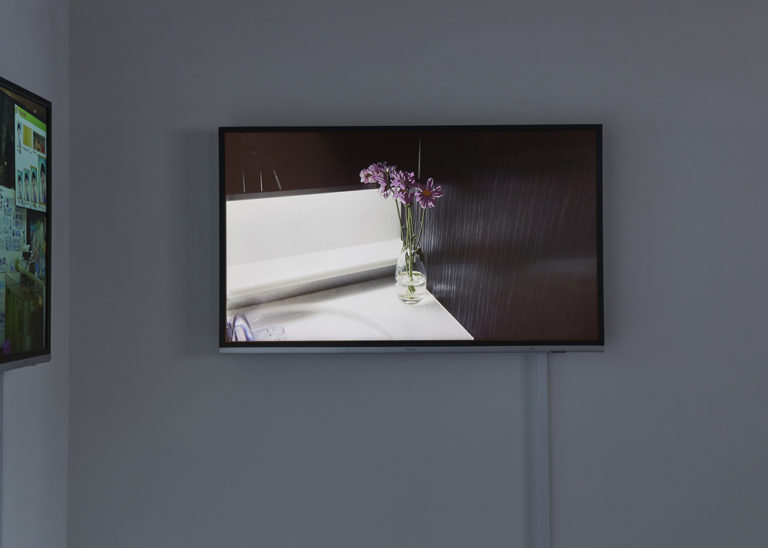 Sequences repeat, and in this repetition Sato’s animated subjects seem thin and fragile: we see only the echo of what has been traced, not its origin or endpoint. Time passes and it doesn’t. I spent an indeterminate and halfway-shameful amount of time watching a chair spin continuously on its axle, listening dreamily to Debussy’s florid accompaniment.

Clair de lune was inspired by Paul Verlaine’s poem of the same name. And just as Verlaine looks at the moon and sees his own desire and need, Sato’s screens are similarly imbued with a particular kind of melancholy. Earlier on in San Soleil the same narrator quotes Samura Koichi: ‘Who said that time heals all wounds? It would be better to say that time heals everything except wounds. With time, the hurt of separation loses its real limits…but what remains is a wound, disembodied.’ The act of separation rendered by tracing leaves just such a disembodied wound; the everyday becomes marked with the sensation of loss.

But all the while it’s the notes of Clair de lune that seem to be choreographing this oscillation between sweet longing and kitchen-sink pain: the opening leap between two minor thirds followed by a pirouette at the top, the way the tonic note sometimes goes missing, the space between the harmonies in the left and right hand.

People are often suspicious of the way pop music can sneak so easily into the soul, and Debussy has always had something of the pop in him. Sato knows about this play between nostalgia, music, memory and image. Part of the fun of Tokyo Trace 2 is the way he has handed the conductor’s baton over to Debussy. Whilst watching Sato’s looping scenes, Debussy’s triplets burrow into your ear, whispering and coaxing, telling you that it’s ok to pause for a while, it’s ok to take time to smell the semi-real roses. But now, when I read that last sentence back, I get a little jolt of embarrassment. All I can say in my defence is that the only gift the perfect soundtrack can ever offer you is to make you talk like a heady saccharine fool.